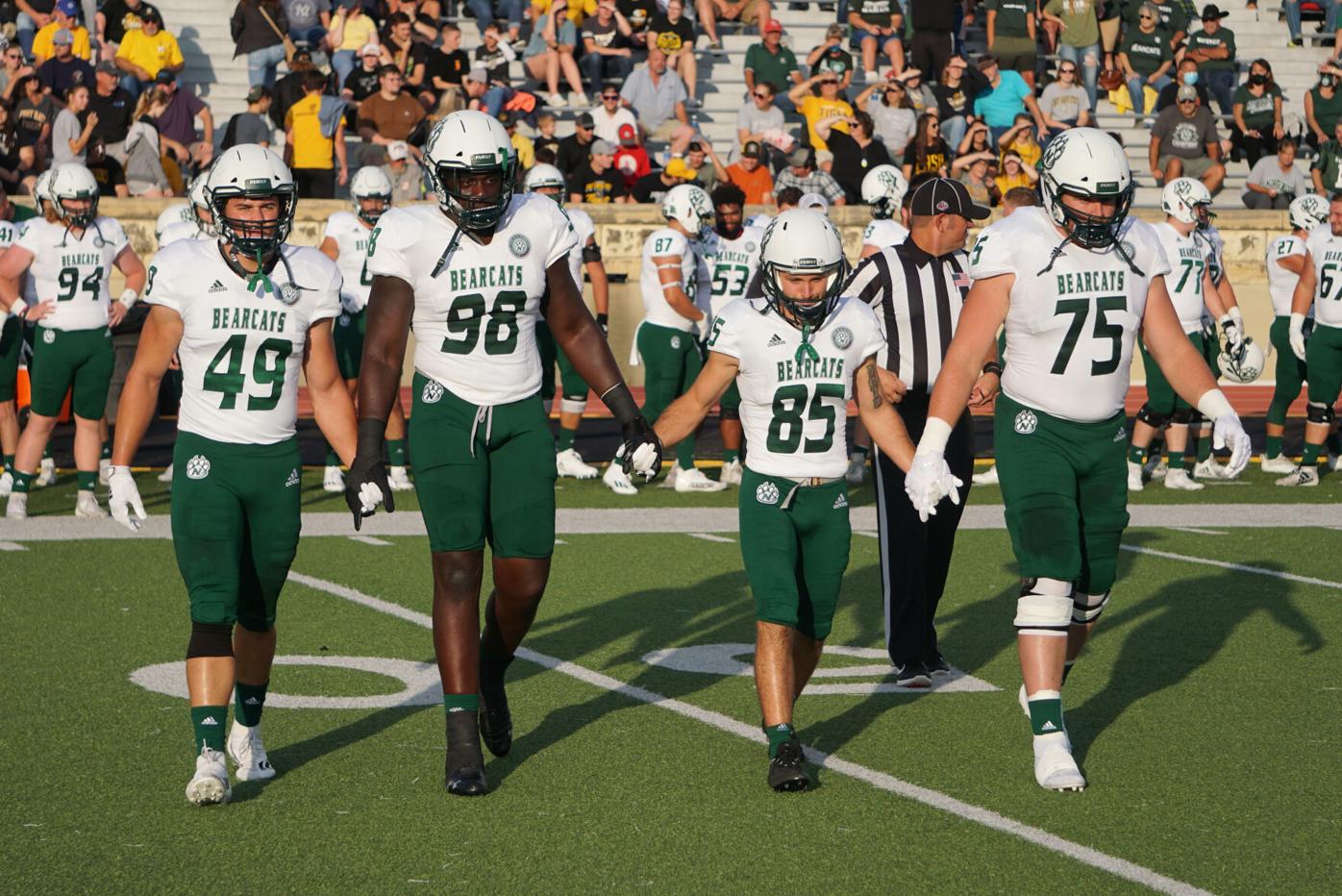 Northwest Missouri State captains and 'super seniors' Jackson Barnes (49), Sam Roberts (98), Alec Tatum (85) and Tanner Owen (75) walk on the field for the coin toss before the season opener in Hays, Kansas, on September 2. 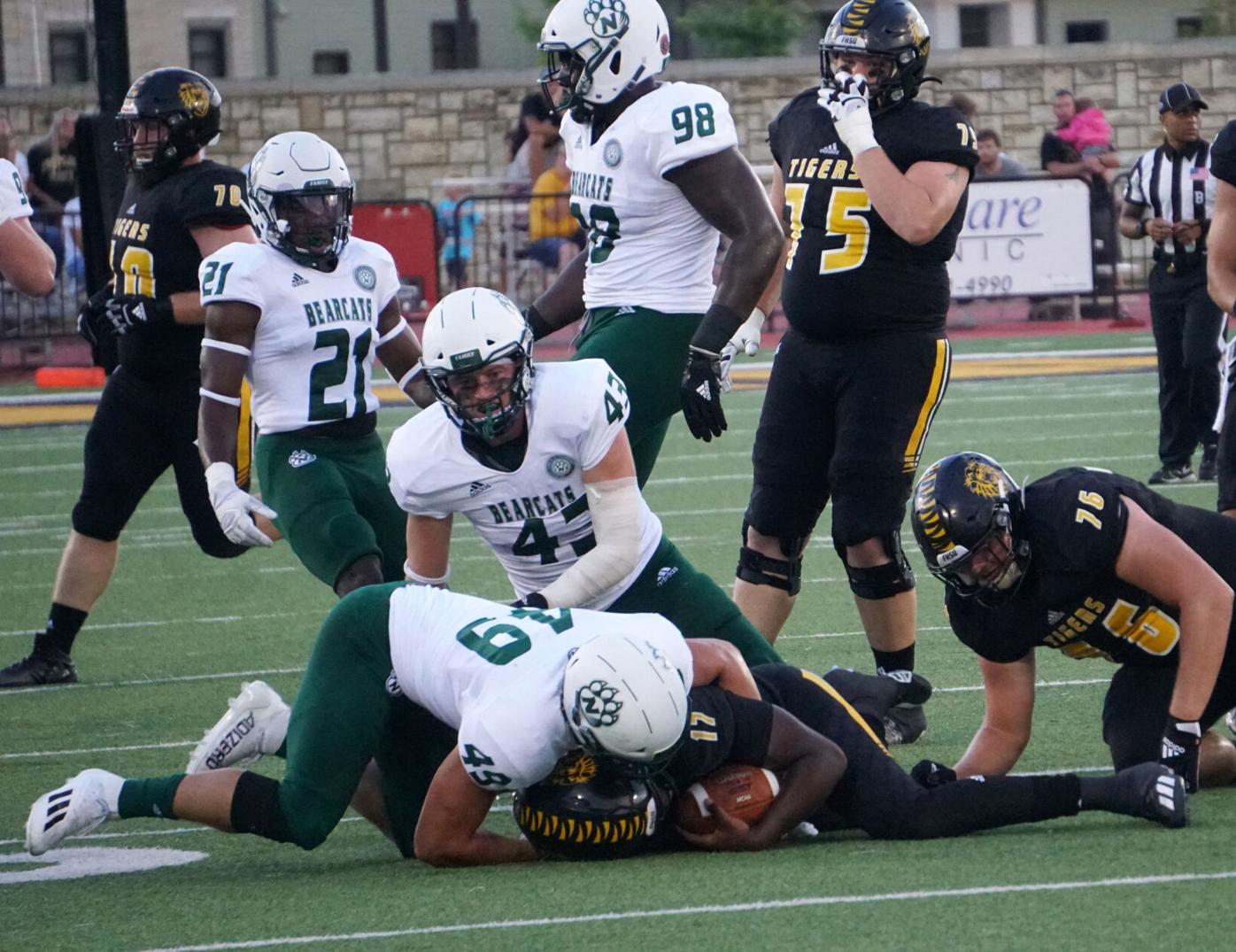 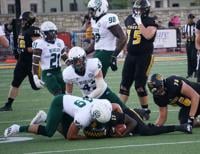 Northwest Missouri State captains and 'super seniors' Jackson Barnes (49), Sam Roberts (98), Alec Tatum (85) and Tanner Owen (75) walk on the field for the coin toss before the season opener in Hays, Kansas, on September 2.

Super Senior Series: Over the next seven weeks, the Maryville Forum will highlight the seven ‘super seniors’ for Bearcat football who returned for an additional season despite already earning their undergraduate degrees. The series begins this week with linebacker Jackson Barnes.

MARYVILLE, Mo. — When a college football team brings in a walk-on player, it only hopes for the path that Jackson Barnes carved through his first four years at Northwest Missouri State.

In 2016, Barnes redshirted. In 2017, he got on the field and recorded the first five tackles of his career. In 2018, he earned a starting linebacker spot after the fourth game of the year and was fifth on the team in tackles. In 2019, he was a Second Team All-MIAA selection as the team’s second-leading tackler.

The path was perfectly according to plan for the Liberty High School product. He graduated last year and planned to continue his academic career by going to pharmacy school after completing his senior season of football.

Then the COVID-19 pandemic threw all of those plans up into the air. With the 2020 season cancelled and players having the option to return for another season, Barnes had a decision to make.

“Everyone kind of has that thought in their mind of when they are going to graduate and their plans for life,” Barnes said. “My class had that set for when we were going to graduate and stuff, then coronavirus happened and everything got cancelled. We had to deal with what we had to do. For me, it was either leave and go to pharmacy school or come back and play football.”

He wasn’t the only Bearcat to have to make that choice though, and a group of teammates got together to discuss their options. Among those were Tanner Owen, Alec Tatum, Bailey Pickering, Brody Buck, Sam Roberts, Dominique Shelton and Barnes.

“After the season got cancelled last year, we were all just in a room talking about what we wanted to do," Barnes said. “All of us wanted to come back and play for that goal of winning a national championship. That really just brought us closer together — to make that big decision in life and play with each other again.”

After the discussion; those seven, who already have graduated from Northwest, decided to try and make this 2021 season a special one.

“I had long talks with my family and people I love and care about,” Barnes said. “I just ultimately decided that I worked way too hard to get here and I know that I’d regret it if I didn’t come back. We have a good team, we have a chance to win a national championship and I really wanted to be a part of that.”

As kickoff approached to that potentially special season, Barnes made the decision to open up about his journey to Northwest. On the morning of the Fort Hays State game, Barnes tweeted a photo of his Walk-On Agreement which he signed on February 10, 2016.

He captioned the photo with: “This is where it all began. Thanks for giving this kid a chance, (Northwest football). Senior season begins tonight!!!”

Barnes said he wanted to share that because he wanted high school players to know that you don’t have to be a highly-recruited player to find college success.

“I actually had no offers,” Barnes said. “There were a couple schools that were talking to me. I went on one visit and the coach told me: we’ll call you the next day with your offer. Never got a call. Another school I was talking to said they were already full and weren’t going to bring me on a visit, so I was kind of left with nothing to show for my hard work.”

Barnes’ coach at Liberty ended up getting him a workout opportunity at Northwest for then-head coach Adam Dorrel. The workout wasn’t one with the hope of a scholarship offer at the end of it. It was just a hope that he could secure a spot on the team as a walk-on.

At the end of his performance, Barnes did enough to impress Dorrel and get that Bearcat Walk-On Agreement signed.

“It was Coach Dorrel at the time and when I was leaving, he gave me a call and let me know that if I wanted a spot, I had it on the team,” Barnes recalled. “… That was a very special moment. I was actually with my dad at the moment — just to see how proud he was of me, that was one of the best moments of my life.”

Since that day, Barnes has only continued to impress Bearcat coaches and then fans when he got onto the field. He was named a team captain this season.

“It really meant a lot to me,” Barnes said. “To work that hard and to have my teammates recognize that and vote for me, that is really special to me and it means a lot to me just to be able to lead those guys.”

Athlete of the Week