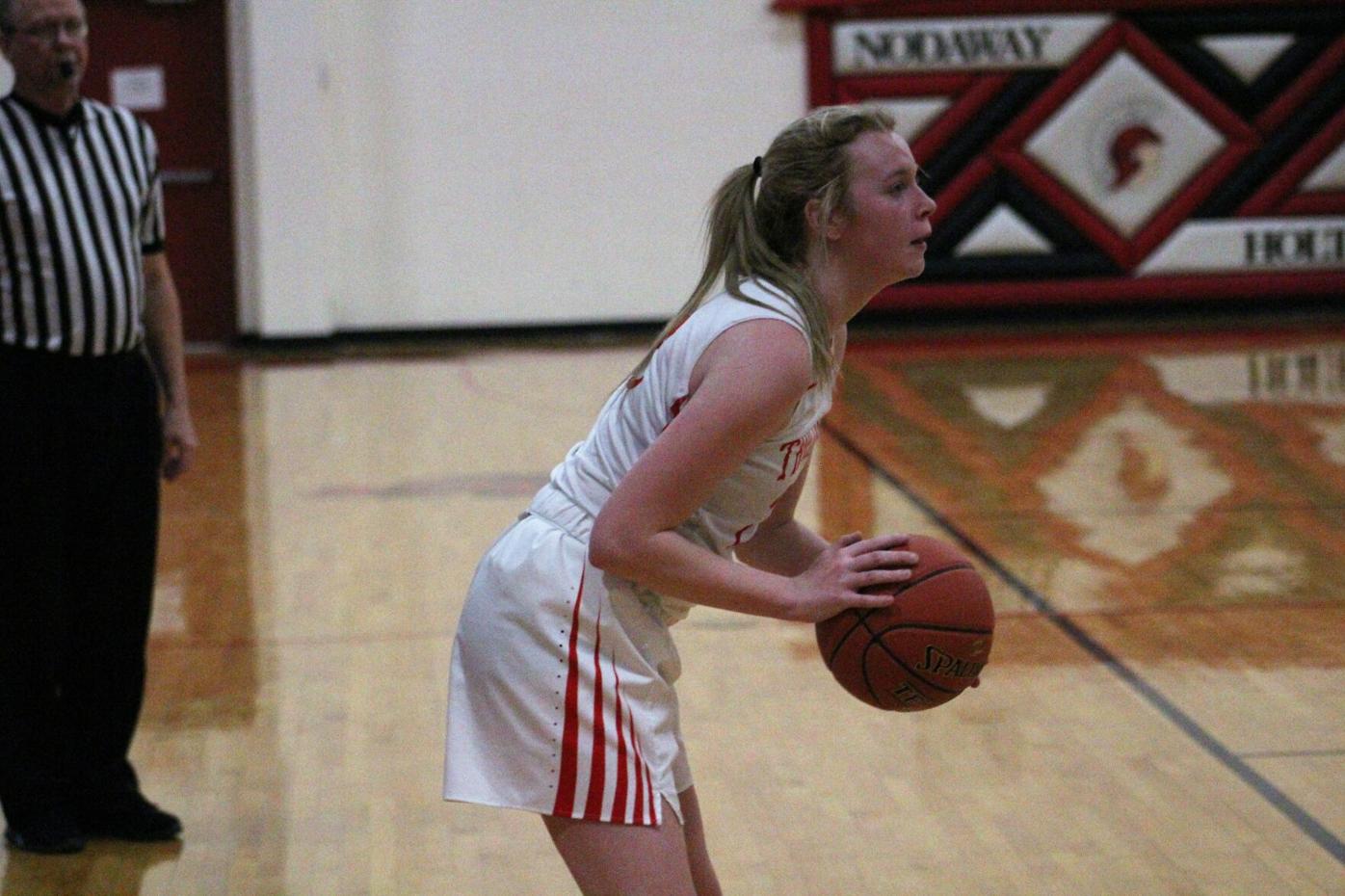 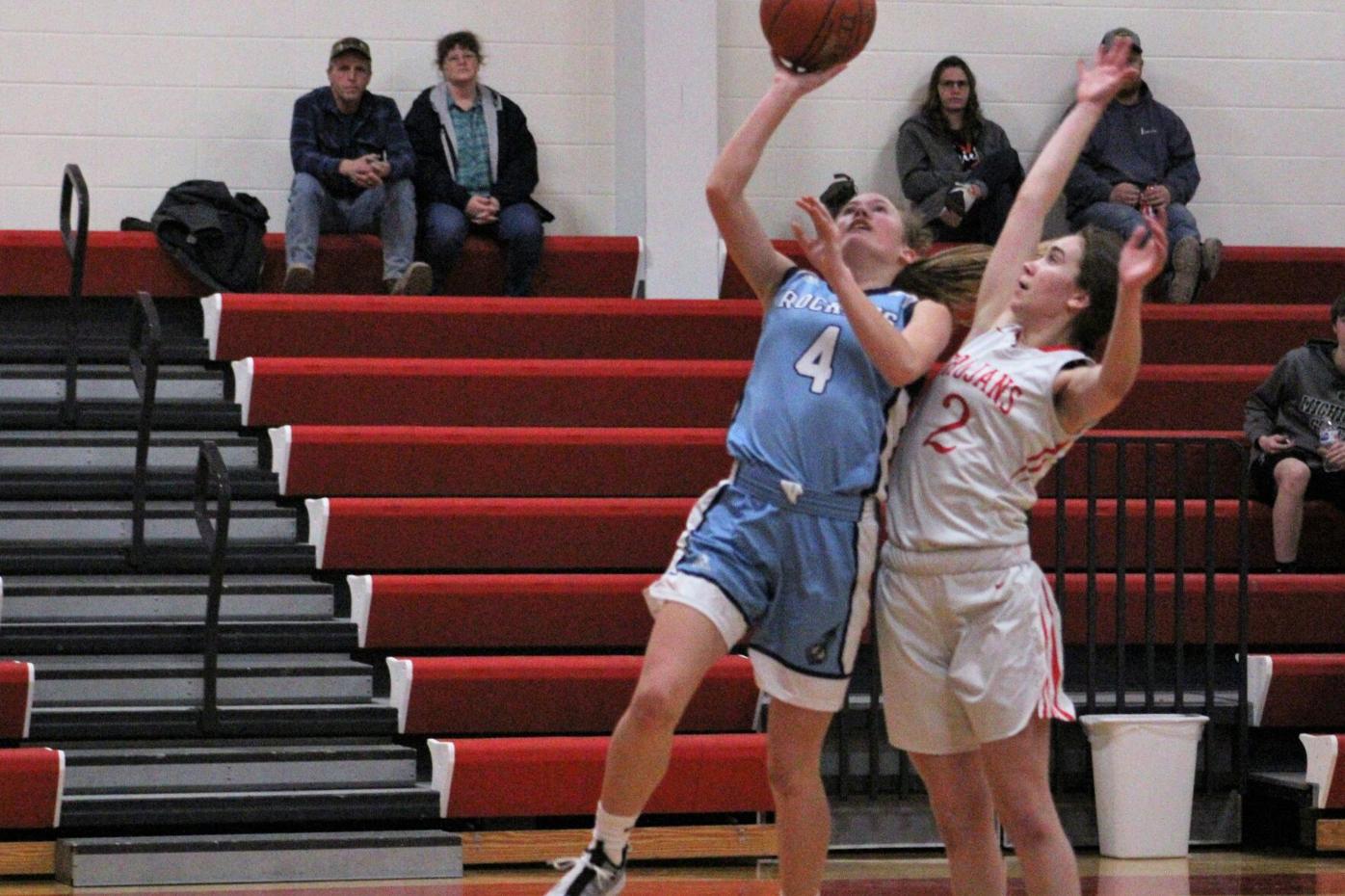 West Nodaway's Piper Hunt goes up for a layup Monday night in Graham. 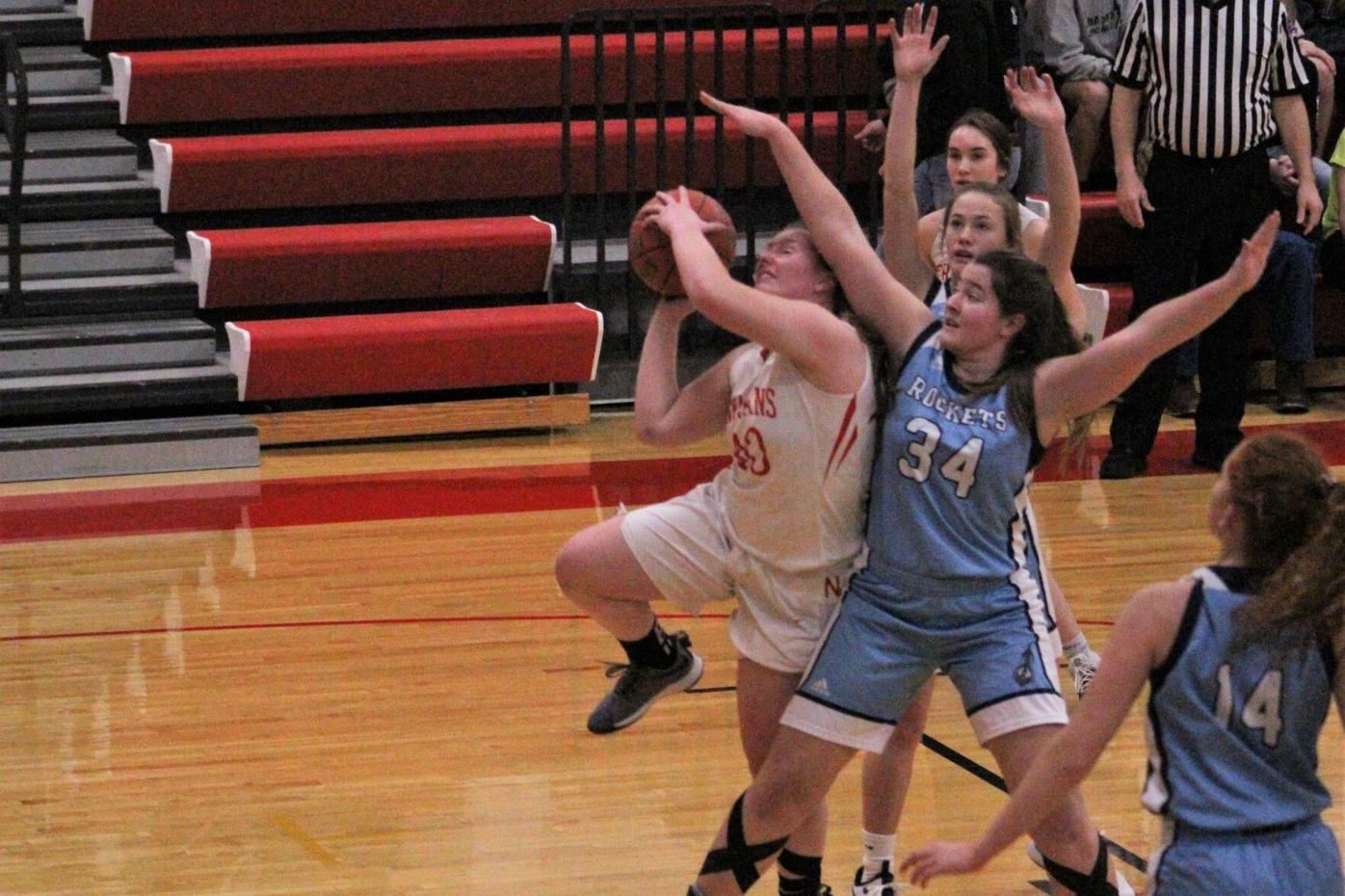 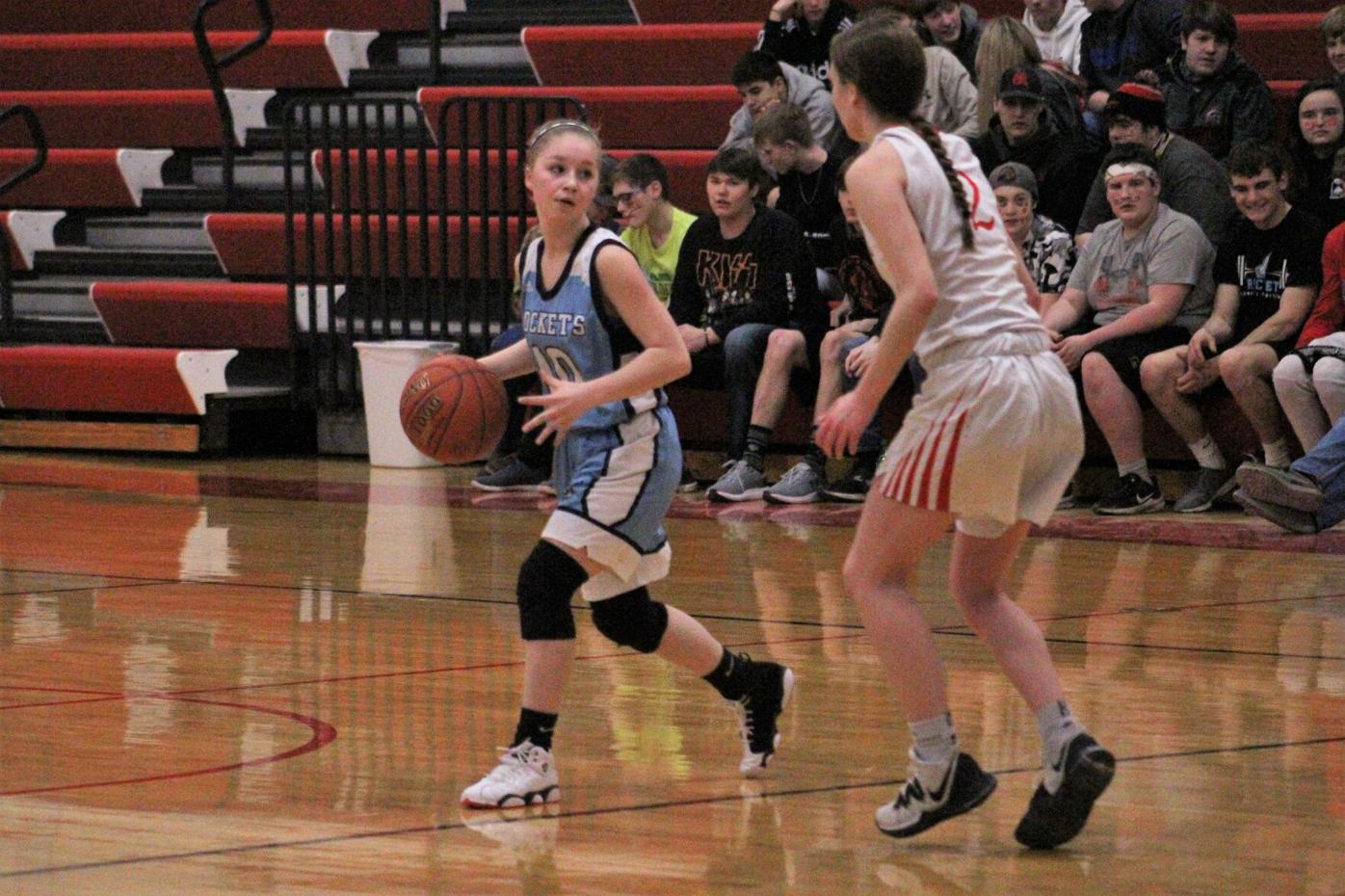 West Nodaway's Sydney Marriott dribbles the ball at the top of the key Monday night in Graham. 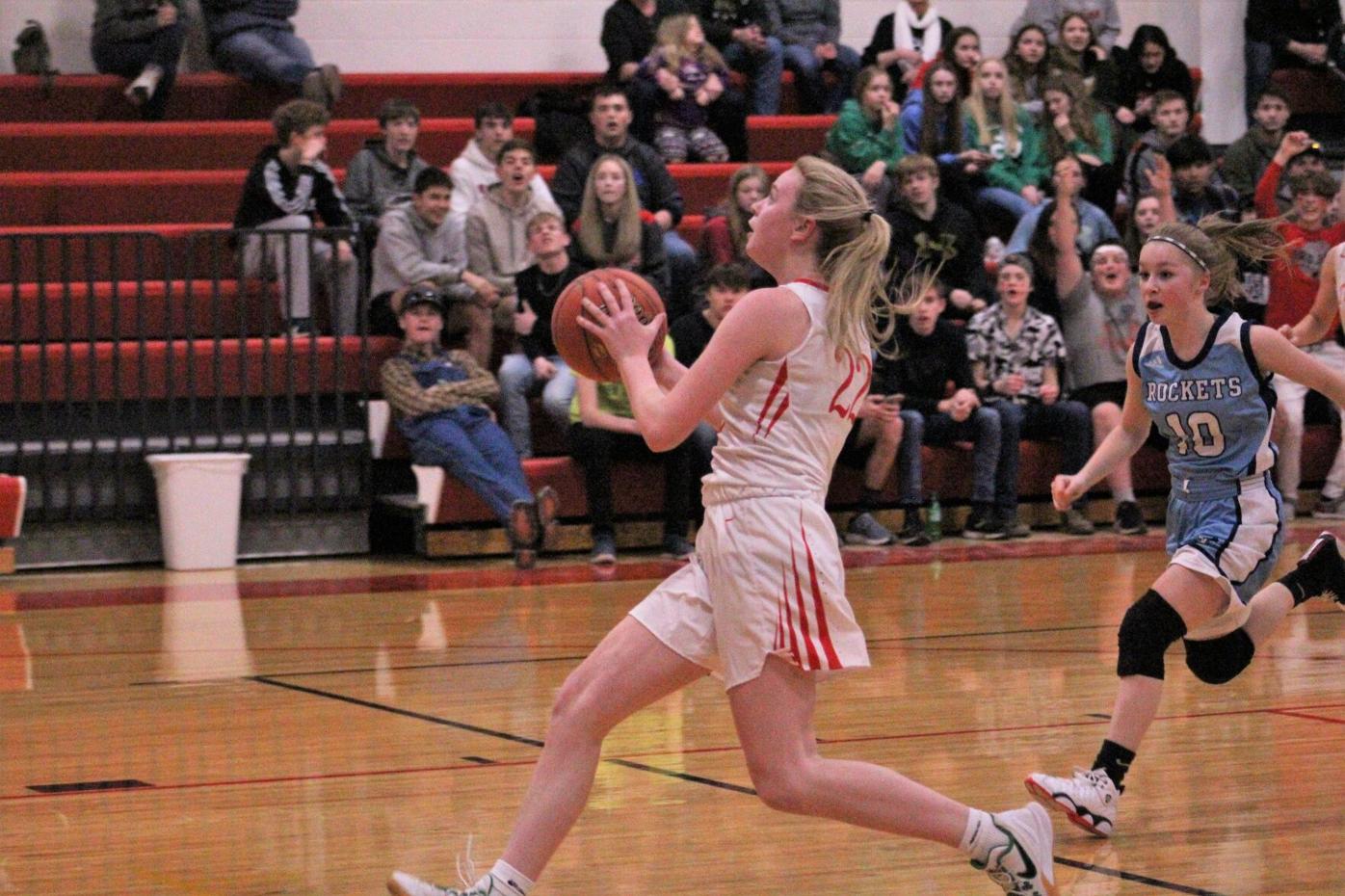 Nodaway-Holt's Shaina Culp goes in for a layup Monday night in Graham. 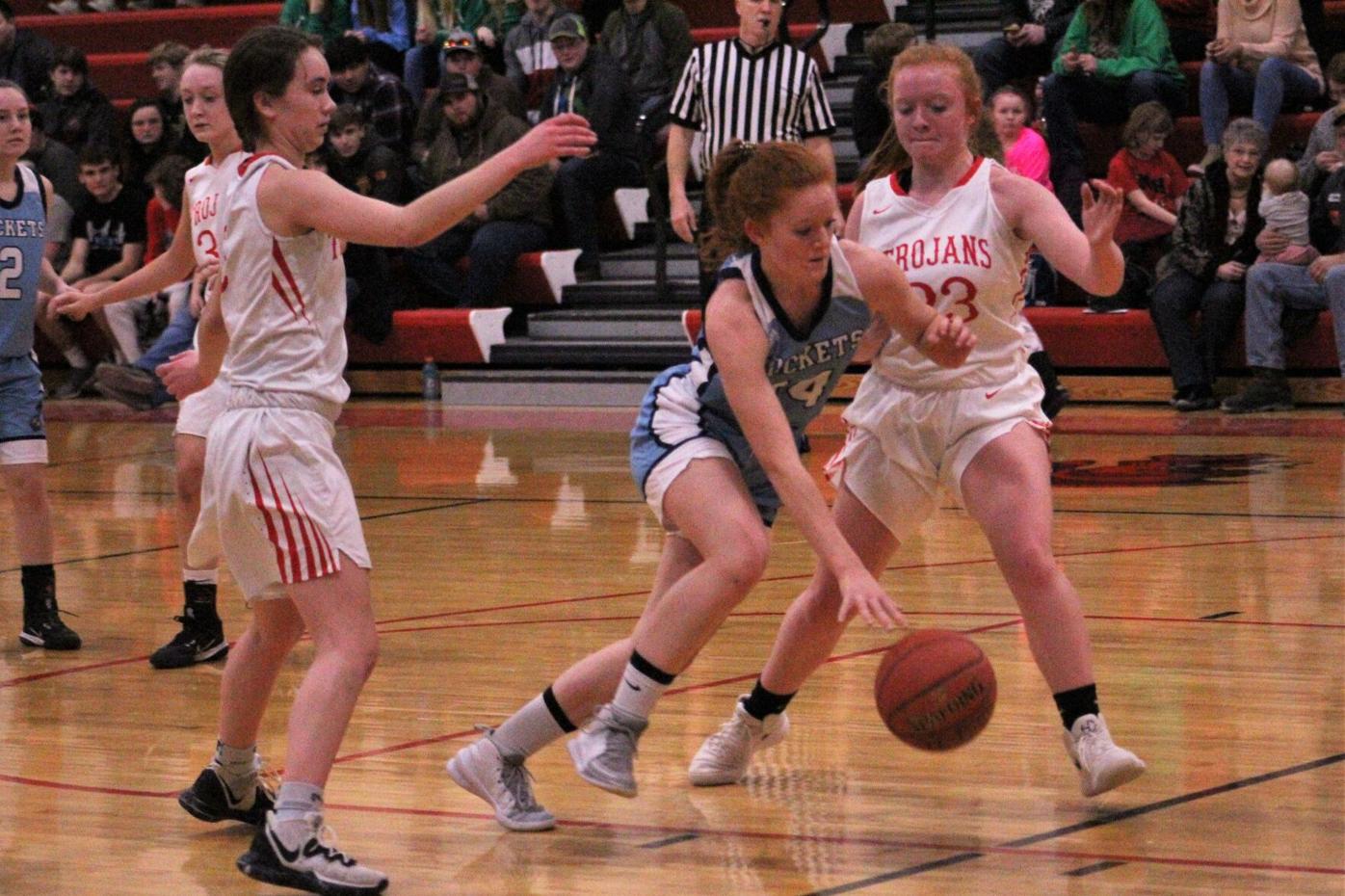 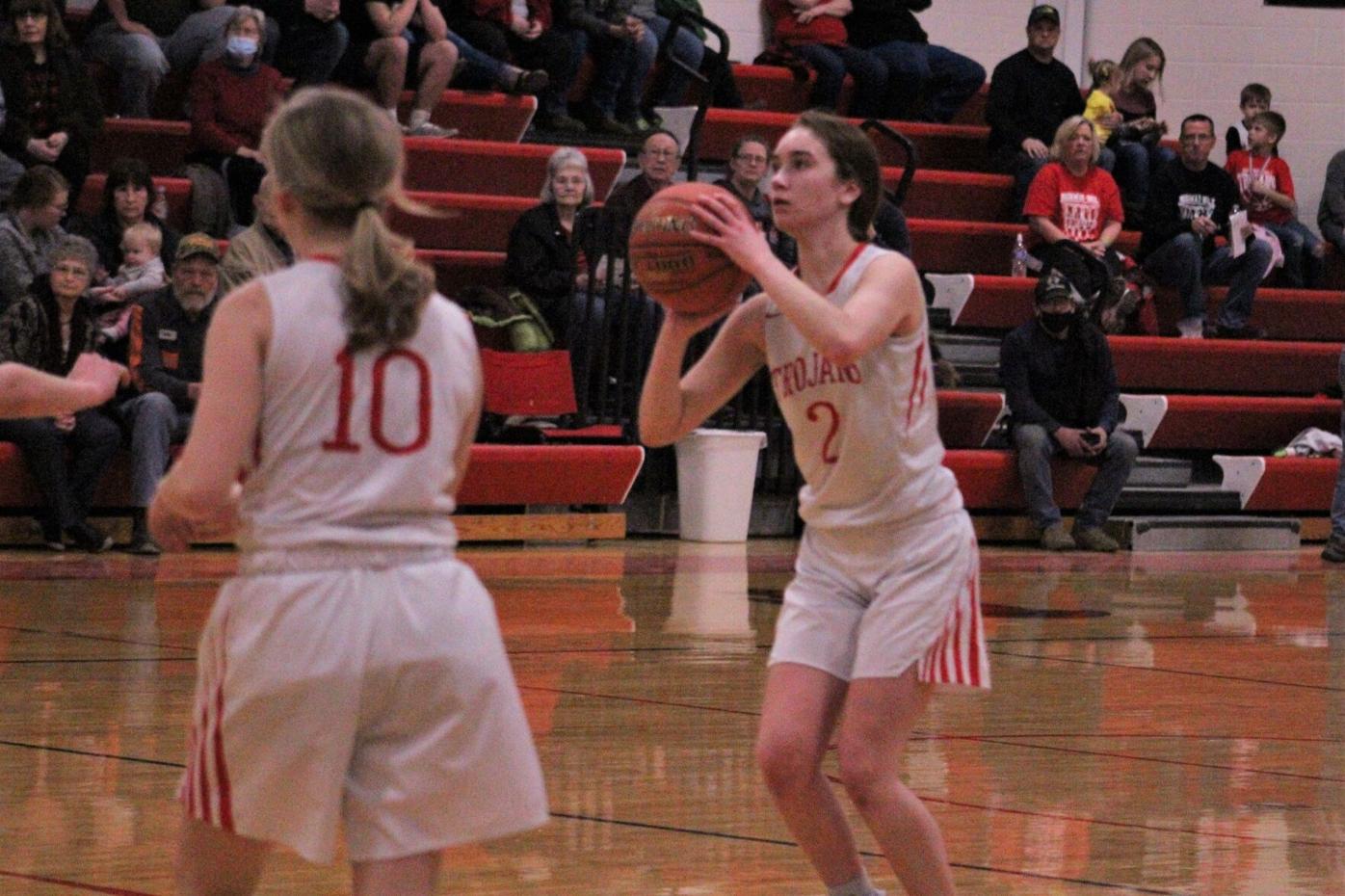 West Nodaway's Piper Hunt goes up for a layup Monday night in Graham.

West Nodaway's Sydney Marriott dribbles the ball at the top of the key Monday night in Graham.

Nodaway-Holt's Shaina Culp goes in for a layup Monday night in Graham.

GRAHAM, Mo. – The main story in Monday night’s opening round district game was the Nodaway-Holt Trojans defeating the West Nodaway Rockets, 45-39. But the subplots were plentiful as it was the final matchup between the two programs before combining next season to become Nodaway Valley.

For Nodaway-Holt senior Shaina Culp, it was a game in which she reached 1,000 career points, becoming the final Trojan to do so.

“It was something I had to work very hard for,” Culp said. “I had two games left and 23 points to get and I just had to set my mind to this game because we have Platte Valley next and that’s going to be really tough. But it feels really good to accomplish it.”

Culp’s 1,000th point came on a free throw in the fourth quarter, and for the senior center — it was a nerve-wracking moment.

“It was very tense, and I felt like if I didn’t make it, I wasn’t going to make it at all,” Culp said.

On the other side, it was the end of an era. The Rockets finished with a 4-19 record and a step in the right direction after winning just five games over the last two seasons combined.

“We’re a little nervous, but I think it’ll go well,” Rockets junior Piper Hunt said on the co-op. “We think that if they’ll let us in, we’ll let them in and so hopefully that’s what will happen.”

West Nodaway had their sights set on avenging a 24-point loss to Nodaway-Holt last month. Kloe Jenkins scored the game’s opening basket, but Hunt gave the Rockets their first lead on a 3-pointer with five minutes left in the first quarter.

Jenkins and Culp helped the Trojans build a six-point lead as the two combined for all 10 of Nodaway-Holt’s first quarter points. West Nodaway closed the gap with a layup from Reagan Hagey and a jumper from Erin Cook at the buzzer to make the score 10-8 at the end of the first.

“We had some silly turnovers, but they also played good defense,” Trojan coach Dustin Jenkins said. “They stepped it up and were ready to play, but our turnovers got us the most.”

The Trojans began to pull away in the second quarter with a 9-2 run over the first four and a half minutes. Culp and Jenkins combined for the first six points before Kayelyn Edmondson’s 3-pointer gave Nodaway-Holt its first points that didn’t come from Jenkins or Culp. The Trojans led 21-14 at halftime.

The third quarter belonged to Hunt and Culp. Hunt scored seven points for the Rockets over the first four minutes of the quarter. But Culp proved to be too much for the West Nodaway defense, scoring 12 points in the period and helping Nodaway-Holt build a 40-25 lead at the end of the third.

“We had been struggling from the outside the last couple of games, so we decided we were going to work it inside into the posts,” Jenkins said.

Culp’s 1,000th point came with 5:16 left in the fourth quarter as the senior made one of two free throws to give the Trojans a 20-point lead. Hunt then did her part in pulling the Rockets back into striking distance with seven of the game’s next eight points to make it a 10-point game.

Riley Linville and Hagey scored the game’s final four points, capping off a 14-1 run for West Nodaway. Hunt led the Rockets with 18 points and freshman Sydney Marriott finished second on the team with 11 points.

It was the final high school game for West Nodaway seniors Erin Cook and Emily Ricketts. Conn said each play an instrumental role in helping him in his first season.

“Erin is the lone wolf as she’s the only one who’s been here all four years,” Conn said. “She’s worked hard and knows what the future brings. She brought the attitude of just wanting to get the ball rolling and be a part of the ball rolling and knowing what’s behind it.

Nodaway-Holt will face the toughest of tests in the next round as they take on undefeated Platte Valley on Wednesday. The Trojans lost 58-26 in their meeting on Feb. 22.

“It’s going to be very hard,” Culp said. “It’s going to take every ounce of effort that all five starters have in their body on Wednesday. They’re a good team; they have height, size, shooters. We have height, but we don’t have the depth. We’re going to really get our butts into shape for that game.”