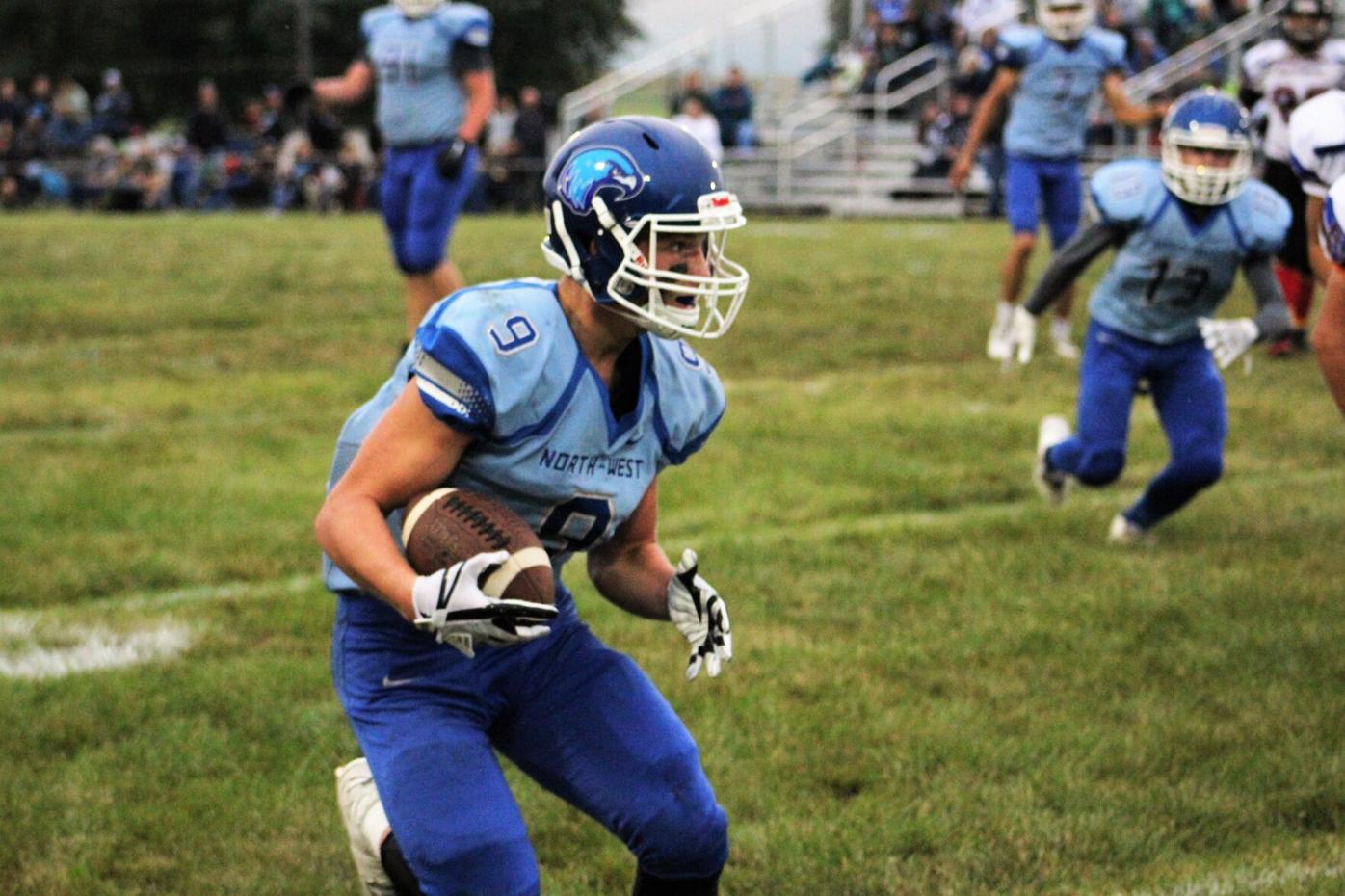 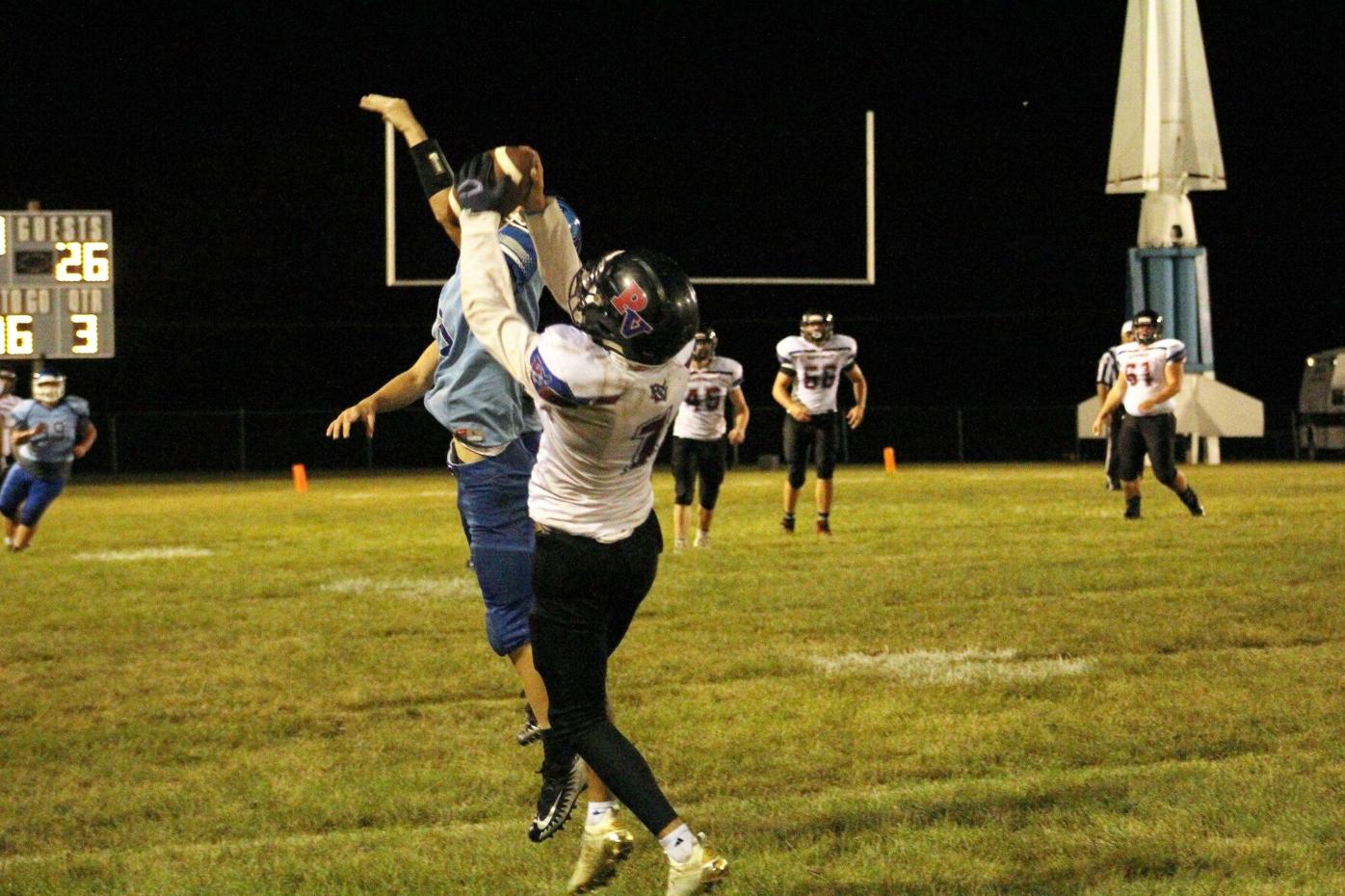 BURLINGTON JUNCTION, Mo. – The North-West Nodaway Muskets felt like they were close coming into their week three matchup with Platte Valley.

The Muskets held Platte Valley scoreless in the second half after trailing by two at halftime. North-West Nodaway overcame that deficit to win 38-26 for its first win under new head coach Alan Calfee.

“In our first two games we had spurts where we played well, but we’d make some mistakes and just let it snowball,” Calfee said. “What we talked about this week was growing and finishing those types of things.”

Platte Valley came into Friday night’s matchup coming off its highest scoring performance since week nine of last season. The Valley offense kept that momentum going on their first drive of the game, driving 40 yards on six plays and capping off the drive with a nine-yard touchdown reception by Arthur Griffin.

The Muskets' first drive of the game was also the longest. North-West Nodaway ran 16 plays for 61 yards and tied the game with a six-yard touchdown run from senior quarterback Karson Oberhauser.

The momentum quickly swung back to Platte Valley as sophomore Jaxon McCrary returned the Muskets’ onside kick attempt back for a touchdown. But North-West quickly responded, scoring on its third play from scrimmage on a 25-yard touchdown pass to senior Preston Bateman.

The Muskets’ forced the game’s first punt on Platte Valley’s second drive, leading to their first lead of the game. The scoring drive again took just three plays as Oberhauser connected with freshman Michael Goff on a 35-yard touchdown—giving the Muskets an 18-12 lead with 11:52 remaining in the first half.

“First and foremost it started up front,” Calfee said. “You talk about throwing the ball, you have to have time to do that and I give Gabe Goff a lot of credit for that. He was playing running back the first two weeks and moved to o-line. As a senior, not a lot of kids would do that, so I think it starts up front.”

After combining for 30 points over 10 minutes of game time, the two defenses held the other team out of the end zone on the next two drives.

Senior quarterback Trevor McQueen helped get the Platte Valley offense going with just under seven minutes to play in the first half, opening the drive with a 17-yard run. McQueen then connected with junior wide receiver Wyatt Tobin for 19 yards. Senior running back Gabe Nothstine finished off the drive with a seven-yard touchdown run.

“We ask a lot of him (Goff) and he’s not afraid of it, he’ll put his head down and get to work,” Oberhauser said. “He’s a pretty good kid.”

The Muskets received the ball to begin the second half and for the fourth time in the game, North-West scored on three plays. Goff carried the ball twice, scoring from 25 yards out on his second carry to re-take the lead.

“The last two weeks our best eight wasn’t on the field,” Goff said. “I have to give credit to my brother Gabe, who switched to offensive line this week with no complaints. He just did it, he’s a great leader and did a damn good job.”

Platte Valley answered with its best drive of the second half, beginning with a 17-yard run from Nothstine. On the Valley’s fourth play, McQueen ran the ball down inside the Muskets’ ten-yard line on a 26-yard scramble.

Platte Valley’s drive stalled there as Hayden Ferry and Nothstine combined for seven yards on three carries. North-West held Nothstine to no gain on the Valley’s fourth down attempt.

The defenses were dominant for most of the second half, specifically in the third quarter as the two team’s combined for four-straight punts.

“We were down-hill, we had linebackers sitting back and reading plays and playing down-hill,” Platte Valley head coach Cree Beverlin said. “For some reason we couldn’t get that going in the first quarter, maybe some in the second quarter, but it looked like a completely different defense in the second half.”

The half’s only touchdown came early in the fourth quarter as Goff and Oberhauser combined for 24 yards on six carries. Oberhauser then ended the drive with his fourth touchdown pass of the game, finding freshman Aydan Blackford for a 17-yard touchdown.

“He does everything that we ask him to do, he was just in perfect position on those two picks,” Calfee said.

Platte Valley lost its starting running back for the second-straight week with Rivera leaving late in the second half with a concussion. Beverlin said that the loss motivated his team after the injury, but also may have hampered them in the second half.

“It gave us a little motivation, but then I think after halftime the boys realized he was gone and we didn’t have the same packages that we had worked on all week in practice,” Beverlin said. “We still had athletes out there with Gabe and Tobin at receiver. We just didn’t hit them, and when we did hit them, they didn’t bring in the ball. I bet we probably left three or four touchdowns out there.”

Nothstine led Platte Valley with 13 carries for 100 yards and two touchdowns. Rivera was on pace for his second-straight 100-yard game, carrying the ball 10 times for 54 yards before leaving the game.

Tobin led the team in receiving with three catches for 49 yards. McQueen finished with 68 yards passing.

“We finally figured out what it takes to finish the game,” Oberhauser said. “We worked hard all week and finished tonight, playing well for four quarters.”

The Muskets will travel to Rock Port next week to take on the Blue Jays. The Blue Jays will be coming off a 72-26 win over the Stewartsville Cardinals.

“What I really tried to emphasize with the guys is that we really have to build from this,” Calfee said. “Enjoy this one, be smart about it, but let’s keep building from this. Let’s get better each week and trust the process.”

Platte Valley’s road doesn’t get much easier next week as they host the South Holt/Nodaway-Holt Spartans. The Spartans will be fresh after their game was cancelled this week due to Covid-19.