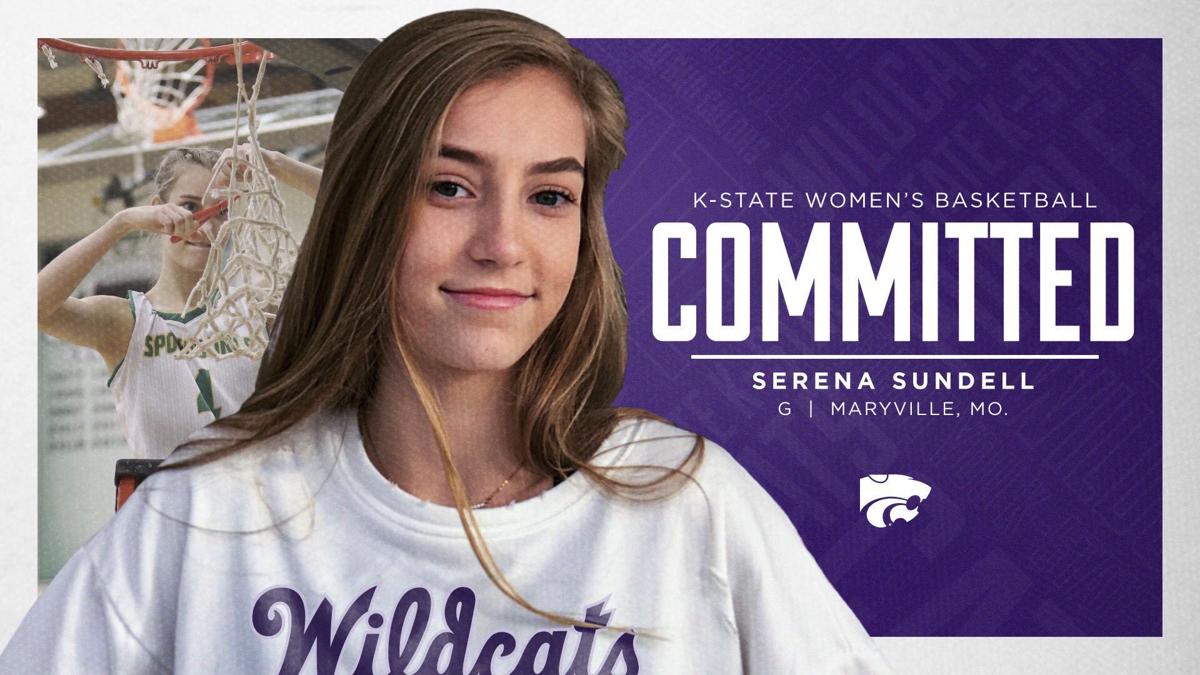 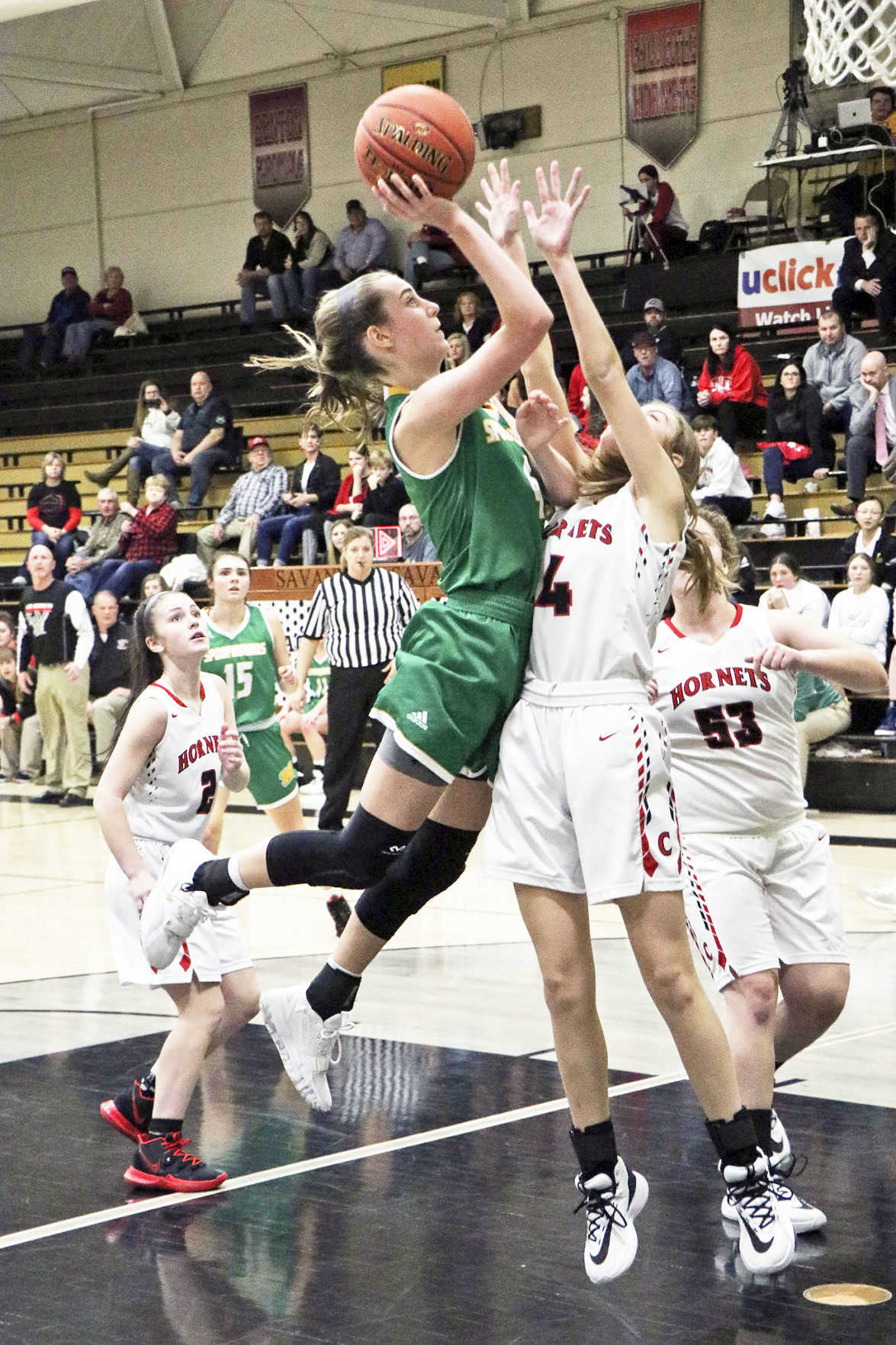 Maryville High School junior Serena Sundell is shown in a game during the 2019-2020 season.

Maryville High School junior Serena Sundell is shown in a game during the 2019-2020 season.

MANHATTAN, Kan. — When Serena Sundell was three years old, her mother would take her to the Maryville Community Center and do “ABC” passing drills.

“She wouldn’t let me play soccer until I got my dribbling done,” Sundell said laughingly in a Tuesday morning interview.

That early instruction set the Maryville High School junior on a path that now appears to be headed toward playing Division I basketball at Kansas State University … and possibly beyond.

On Monday, Sundell, a 6-foot-1 guard, announced she is committing to play for Head Coach Jeff Mittie and the Wildcats of the Big 12 Conference.

It was one of 12 Division-I offers Sundell has received during the first three years of her high school playing career.

During her freshman year, she received an offer from Coach Austin Meyer at Northwest Missouri State University.

“As cliché as it sounds, it really felt like home,” Sundell said. “It is a place I know I can be successful and have a great overall experience. I have great relationships with the coaching staff and love the girls on the team.

“Manhattan is very similar to Maryville, just a little bigger. I love the fact that it is a college town, which is what I have grown up with my whole life being in Maryville.

“Distance was not a huge factor throughout this process, it is just another bonus — my family and friends will be able to watch me play.”

But the warm and fuzzy aspect is just part of Sundell’s reason for choosing to become a Wildcat. She clearly has a desire to compete.

“Being in the Big XII will give me an opportunity to play against some of the best players and teams in the country,” Sundell said. “This program has made the NCAA tournament six times out of the last 10 years. Since 2000, the program has had 11 alums drafted into the WNBA.”

It probably didn’t hurt K-State’s chances that Mittie, in his six seasons at the helm of the Wildcats has led the team to a 100-66 record, taking the team to five-straight postseason appearances, including three NCAA Tournament appearances.

“Coach Mittie does a great job in helping his players be successful after college,” Sundell said. “Basketball wise, Coach Mittie is about a .650-win coach for his career. This team consistently finishes in the top half of the Big 12.”

Mittie is a 1989 graduate of Missouri Western.

In 27 years of coaching, he has 550 wins, 20 postseason appearances, nine conference titles and five conference coach of the year awards.

“Kansas State just did a great job in letting me know what role I was expected to fill when coming in and throughout my career.

“After talking with previous, current and upcoming players, I have a great idea of what to expect from this program and university. Another bonus is Kansas State is a football school. The environment during football game days is unreal.”

Not only does Sundell know what to expect from the program. She said one of the things that attracted her to Manhattan was that the program, specifically Mittie, did a good job of letting her know what they would expect from her.

“Generally, they don’t redshirt freshmen,” Sundell said. “They like my versatility and plan to use me in one of the guard positions, 1 or 2. Their style of play is more traditional. They always have very talented post players, including 12-time (2019-2020) Freshman of the Week Ayoka Lee.

“They see me being a threat to shoot and spreading the floor.”

Even though Sundell said it wasn’t a huge factor in making her decision, she’ll get to continue playing with two of her teammates from summer league teams, Brylee and Jaelyn Glenn, twin sisters who have been standouts for Barstow High School in Kansas City.

“I would have committed to Kansas State either way,” Sundell said. “However, it sure is going to be nice playing with familiar teammates. We play well together and make each other better.

“Those two girls are very talented and hard-working. We have been playing together since the end of fifth grade.”

Two people who did have an impact on where Sundell chose to go to school were her parents, Bob and Korena Sundell, both former standout college athletes.

“They were a huge piece in helping me decide,” Sundell said. “They encouraged me to make lists, phone calls, watch games and more.

“I was a very fortunate 2021 kid in the fact that any school I was highly considering, I got to make a visit before everything got shut down. My mom helped me plan and set up those trips, so I felt like there was nothing missing when it came to making a decision.

“They have both been great inspirations for me because of the accomplishments they made personally while they played.”

Sundell said she thinks her parents will make all of her home games and because, “they do like to travel,” she anticipates they’ll make every effort to make most of the away games, as well.

Just because Sundell’s basketball future has become more certain, doesn’t mean she’s not focused on the work still to be done at Maryville High School.

Sundell will be a senior for the 2020-2021 season and will try to lead her team to another deep run in the state tournament.

The 2019-2020 Spoofhounds, behind 24 points, six assists and three steals per game from Sundell, made it to the quarterfinals before falling to a relatively young Macon Tigers team at Blue Springs. Maryville’s girls finished the season with a 21-6 overall record and shared the Midland Empire Conference championship title for the first time since 2011.

Sundell will once again have a strong supporting cast, as Anastyn Pettlon and Rylee Vierthaler, who both stood out as freshmen, return to the mix. They’ll be joined by Emily Cassavaugh, Lauren Cullin and a cast of unproven up-and-comers.

“I would love to go to the Final Four and one more game after that,” Sundell said when asked about goals for her senior year. “Would love to get Class 3 Player of the Year again. There are several MHS state records that are reachable my senior year that I would like to get.

“I want to continue to improve my leadership and being more vocal, which I know will be very important at the next level.”

“Serena has worked tirelessly honing her skills as a player,” Albrecht said. “She has spent countless hours working to improve her game in order to put herself in a position to continue her basketball career at the next level.

“I am very excited and proud to see that hard work get recognized with the honors and awards she has received. Even more I am excited to see her dreams come true.

“Kansas State is getting a great player and even better person. They are very fortunate.”

Sundell was equally appreciative of the role Albrecht has played in her development.

“Coach Albrecht is so passionate about the game and this program,” Sundell said. “He takes a lot of pride in his work and this team.

“He is always willing to do whatever it takes to help me and my teammates on and off the court.”

Looking back on her career through three years of starting for the Spoofhounds, Sundell made sure to point out that it is all about the journey with her teammates.

“Honestly, just being a part of turning this program around,” Sundell said. “Before I got here, at one point, the program had a one-win season. Now, as you know, we were one game short of going to the Final Four.

“It has been awesome to show younger kids that hard work is necessary to be successful. Setting an example for future generations is something to really take pride in.

“Sharing postseason play with my teammates every year and especially this last year, are some of my favorite memories. The feeling you get knowing you are moving on and get to do it with the girls who have been by your side all season is one of the most incredible feelings.”

Phil Cobb is the founder of Cobb Publishing, LLC, which manages Forum Media Solutions, The Maryville Forum and The Post.