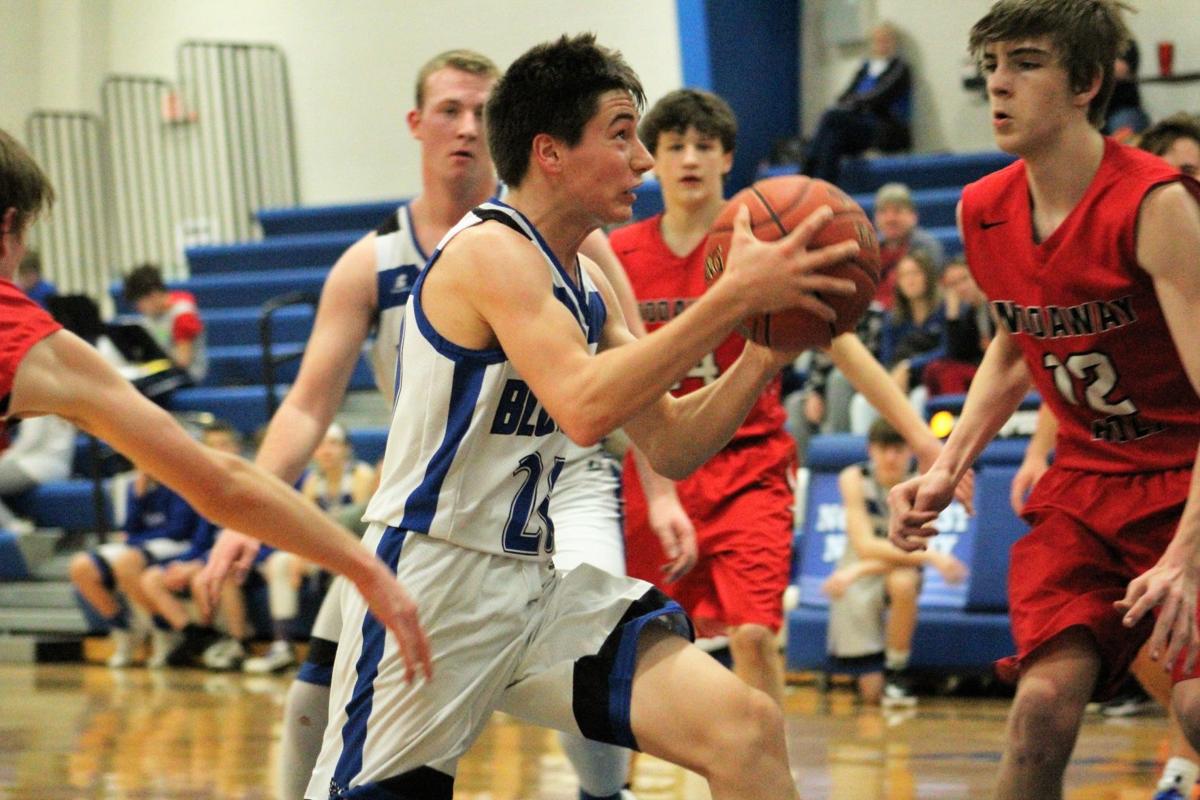 Northeast Nodaway's Ben Boswell goes in for a layup. 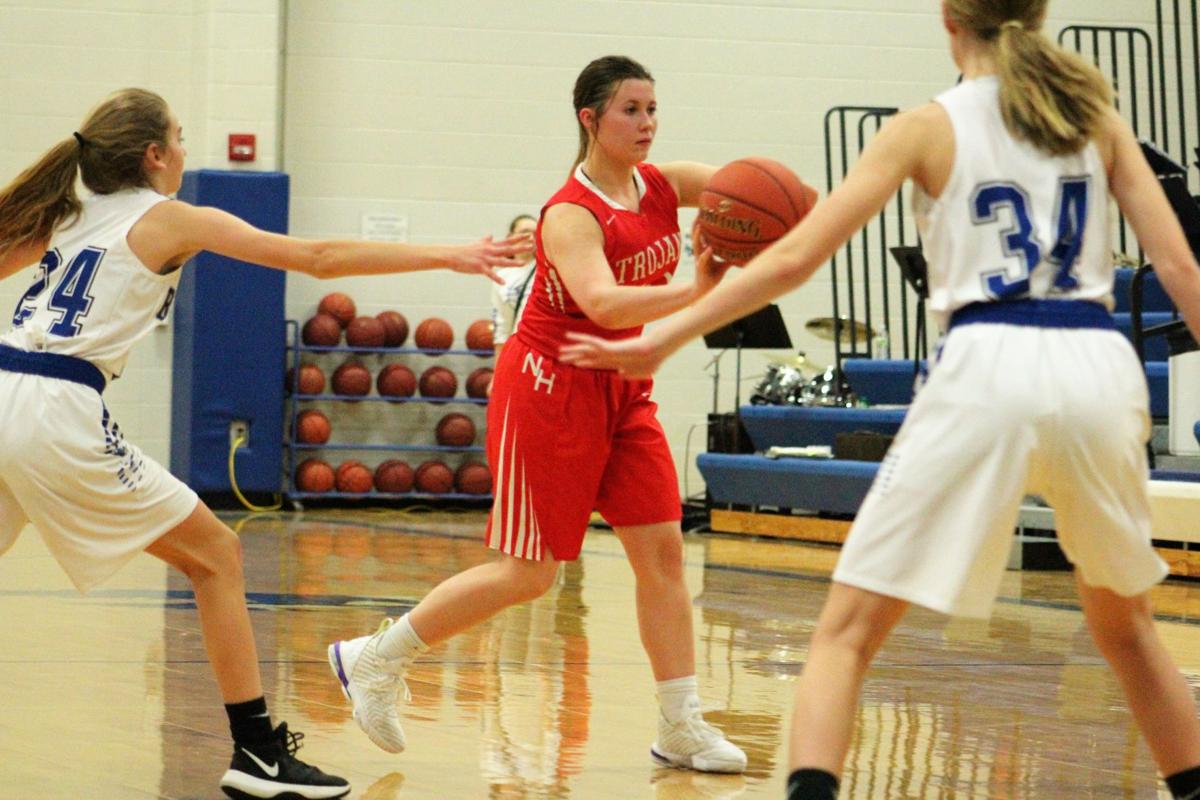 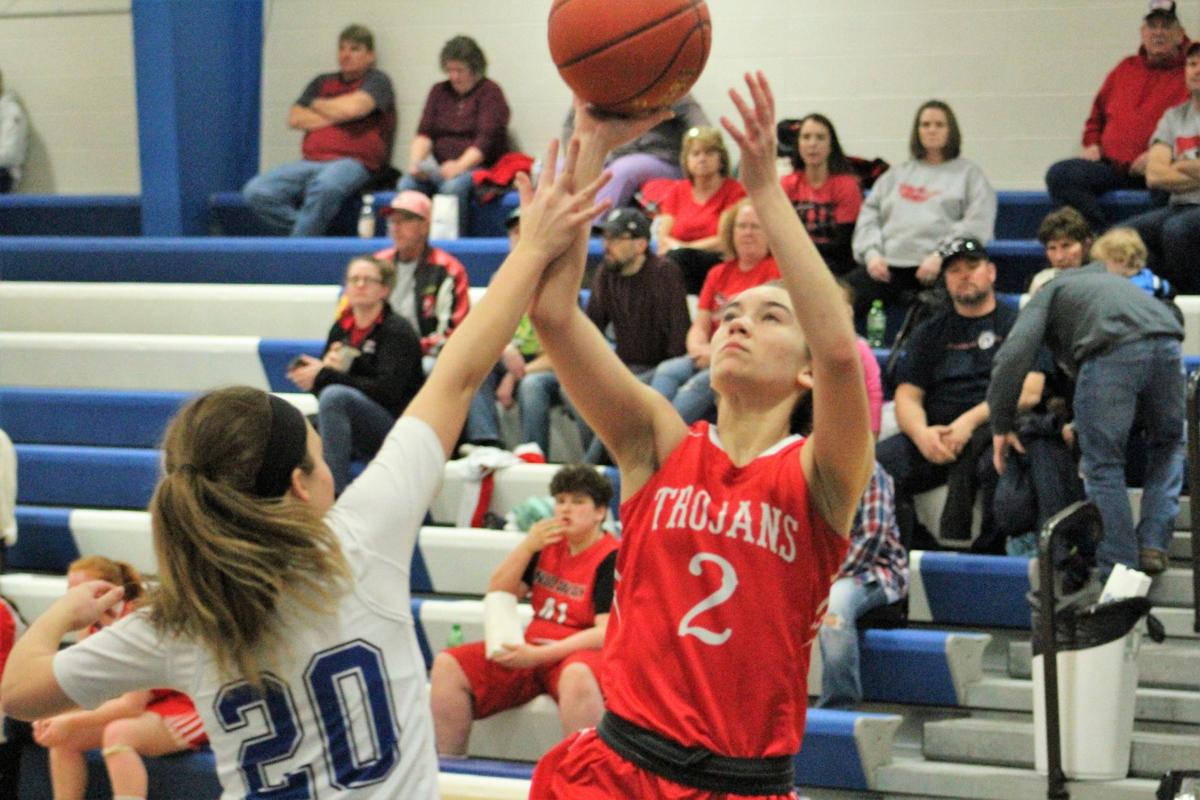 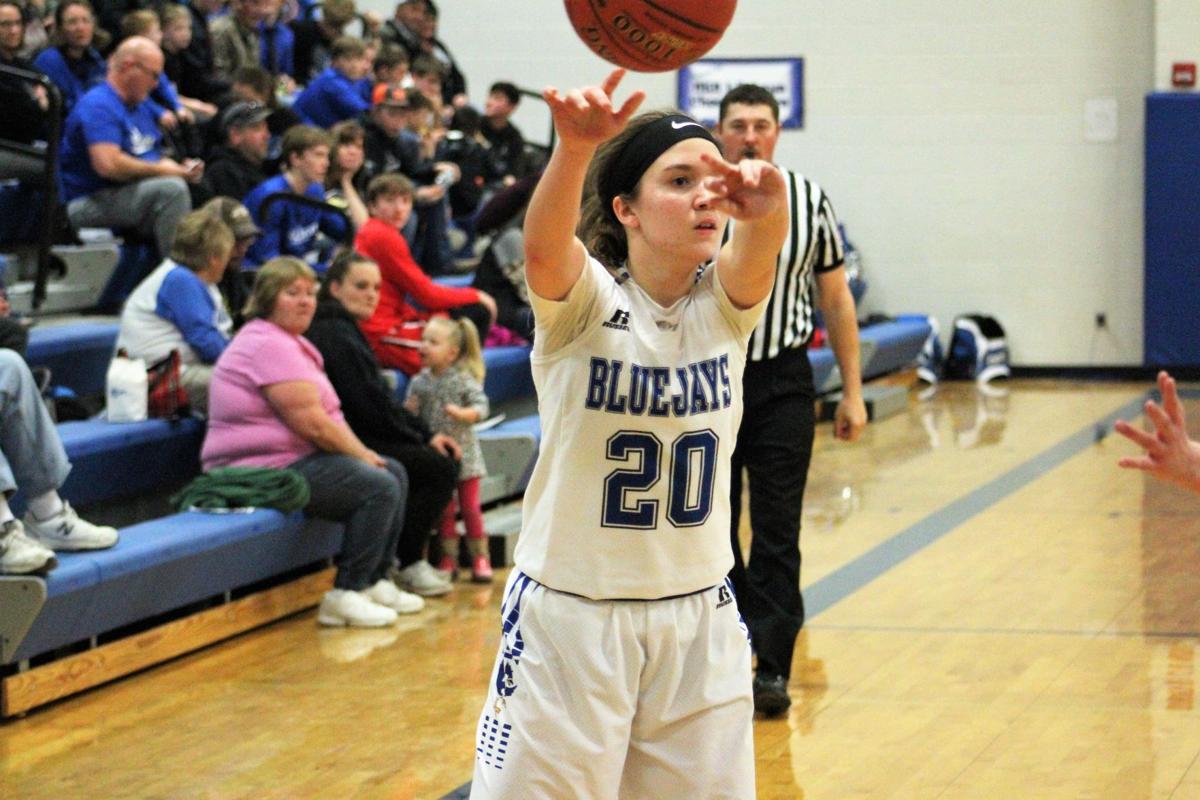 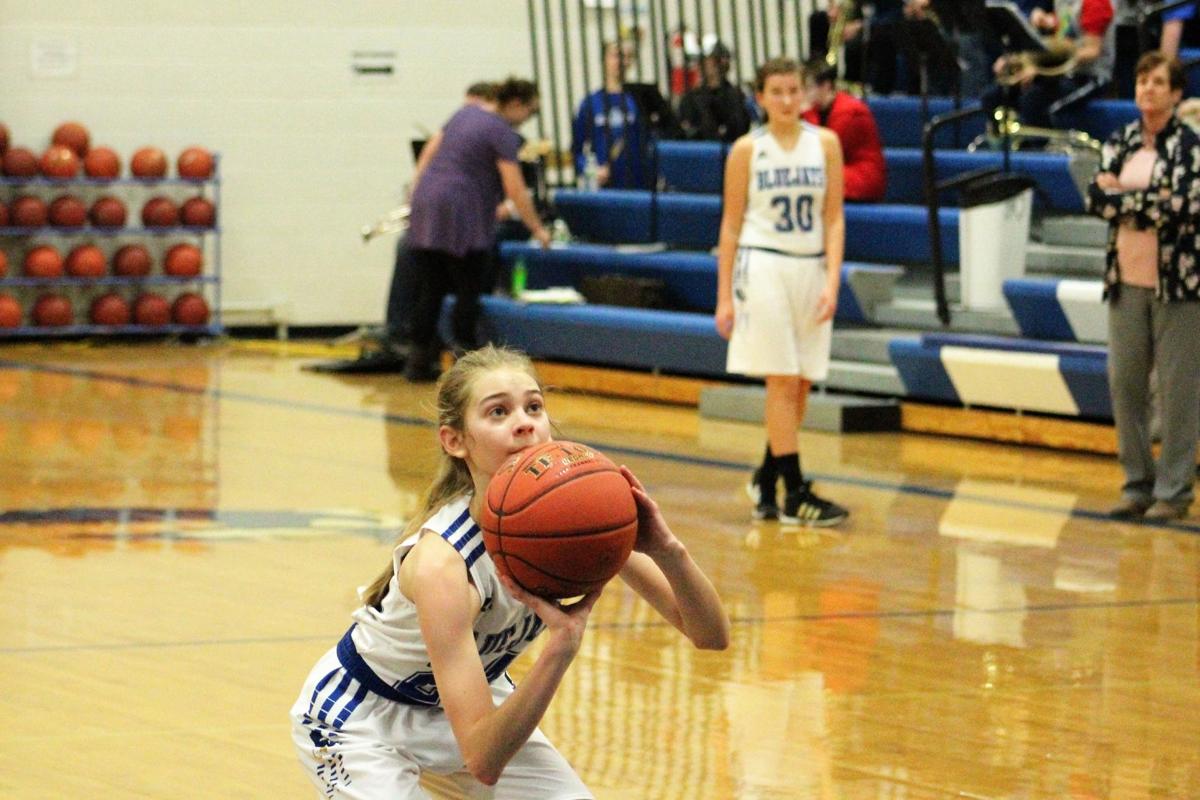 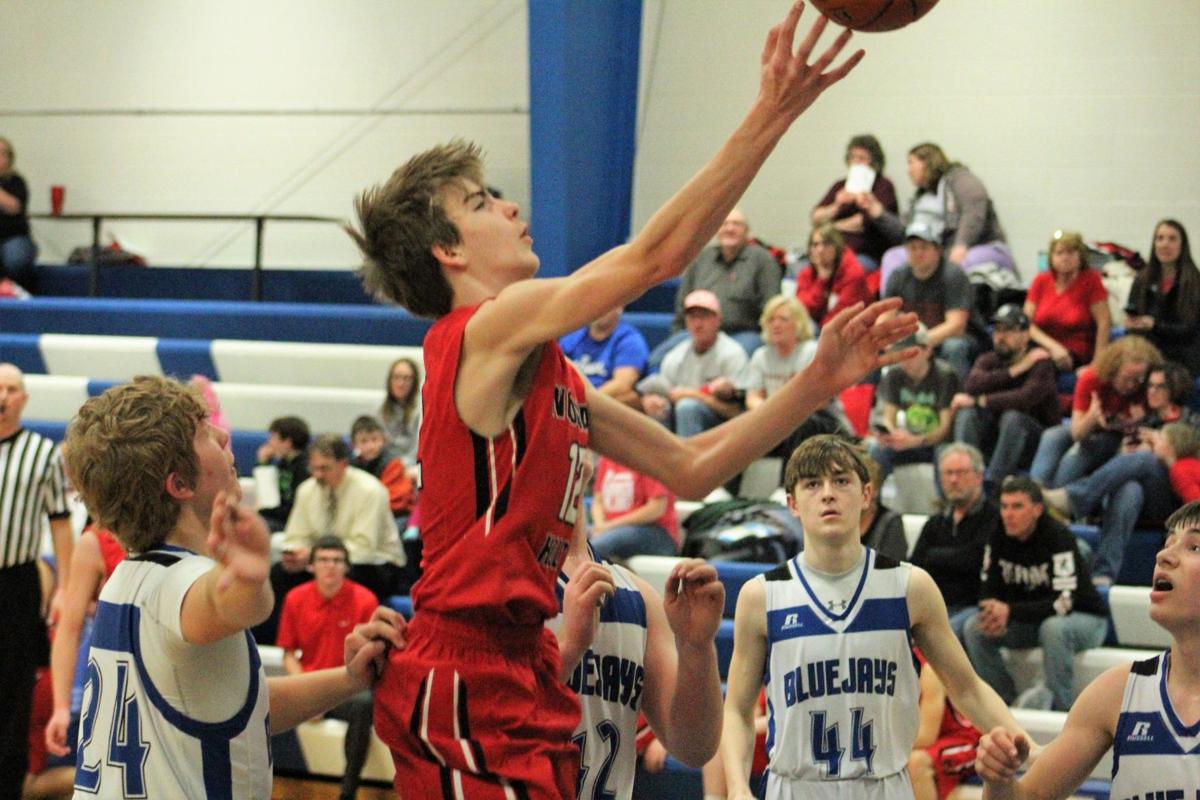 Nodaway-Holt's Noah Farnan goes up for a layup. 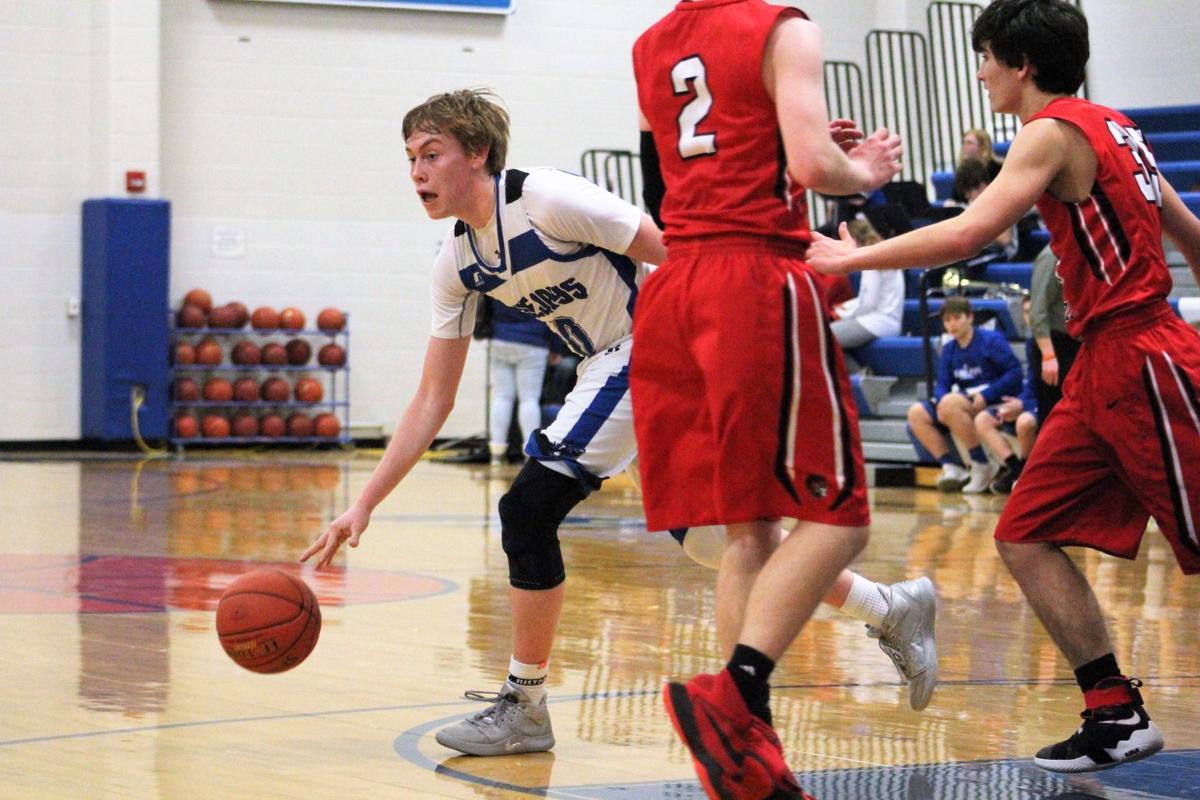 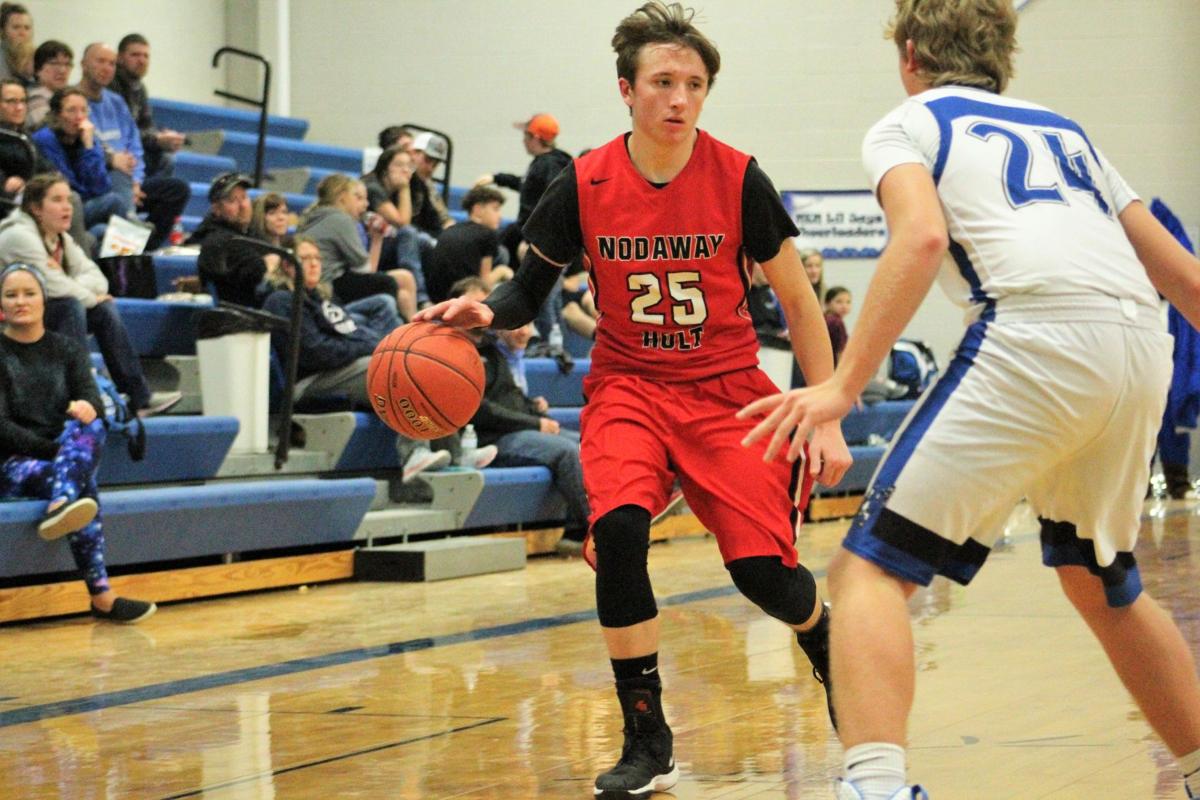 Northeast Nodaway's Ben Boswell goes in for a layup.

Nodaway-Holt's Noah Farnan goes up for a layup.

RAVENWOOD, Mo. – The Northeast Nodaway Bluejays and Nodaway-Holt Trojans were each coming off a season where they found a lot of success on the basketball court. But the 2019-2020 season has placed them on the other side of the spectrum. Tuesday night at Northeast Nodaway High School, it was the Bluejays who garnered success with a 26-22 win over the reeling Trojans.

“It’s nice for the girls to get a little confidence before the season ends so that hopefully it gives them a little motivation in the offseason,” Bluejays girls coach Joyce Stiens said.

Junior Anne Schieber got things going for a Bluejay offense that has struggled to score points this season. Schieber scored eight points in the first quarter and 10 total in the first half.

The Northeast Nodaway defense did its part in holding the Trojans to five points in the first quarter. Alexis Maurer owned more than half of Nodaway-Holt's points with a three-pointer, while Shaina Culp added a two-point basket. The Bluejays led 13-5 after one.

“We came into the game very positive, we went into the locker room and wrote down our goals, which is something that I really liked,” Cassy Redden said. “I think it got us into the mindset of going in and focusing on that kind of stuff. It reminded us what to focus on and what to do as a team.”

The second quarter of the contest saw the two teams combine for just 11 points — a sign of things to come in the second half. Schieber and Ruby Wilmes each added baskets for the Bluejays to help them to a 19-10 halftime lead. Culp led Nodaway-Holt with six first-half points.

“I’m not the tallest person in the world, especially going up against those taller post players (Culp) and so I just have to remember to stay mentally in the game when that kind of stuff happens,” Redden said. “When I know they’re taller and I know I’m not able to score as much, I have to make sure I look to share the ball instead of just going straight up against the taller player.”

After a slow first half offensively, the Trojan offense showed signs of life in the third quarter. Nodaway-Holt outscored Northeast Nodaway 8-4, cutting the lead to 23-18 heading into the final quarter.

Sophomore Kayelyn Edmondson and Culp started the fourth quarter with two points each to cut the Bluejays’ lead to one with 4:58 remaining in the game. Northeast Nodaway struggled to find the rim in the second half and didn’t score its first points in the fourth quarter until Redden’s free throw with 1:31 left in the game.

“We had a great first half, but I don’t know if some of that is fatigue because we’re just tired both mentally and physically,” Stiens said. “Then we start doubting what we can do and not running our offense all the way through.”

The Trojans failed to convert on opportunities awarded to them down the stretch. The Bluejays made three of nine free throws in the fourth quarter. Schieber made two of those three with 14 seconds left in the game, helping Northeast Nodaway to consecutive wins for the first time this season.

The loss drops the Trojans to 5-15 and is the team’s seventh-straight loss. Nodaway-Holt’s road doesn’t get any easier, traveling to Conception to take on Platte Valley this Friday.

For the Bluejays, they improve to 4-14 on the season and face a tough test on Friday, hosting the South Holt Knights who come in at 15-4.

“To get a win this time of year is exciting for those younger girls and for them to know that they can be a part of a winning program,” Stiens said. “It’s exciting for the juniors too because they’ve really wanted to get these freshmen going. They’ve worked with them well, they’ve been motivating them and it’s just really good all around for the whole team.”

The Northeast Nodaway boys won their second-consecutive game in dominating fashion, defeating the Trojans 70-29. Mitchell Sherry and Ben Boswell led the way for the Bluejays with 20 points each.

“Coming off of the two hard games we had against East Atchison and Mound City last week before going to Union Star, we played two hard games where we fought tough and fell short,” Sherry said. “So we wanted to come in, try (our) hardest and put forth the effort that (we) had in the other two games and keep it going. We want to build that team chemistry up.”

Boswell and forward Austin Pride made big impacts from the beginning Tuesday night. Pride scored seven points in the first quarter, while Boswell added five to give the Bluejays a 19-7 lead at the end of the first quarter.

Boswell, a sophomore guard, scored seven points over the first minute and three seconds of the second to more than double his first quarter total.

Northeast Nodaway began the second quarter with a 16-0 run to give the team a 35-7 lead. Brilyn DeVers and Will Peter broke up the run with back-to-back baskets midway through the quarter to get the Trojans to double digits.

“We just got really stagnant on offense, the movement and back-cutting that we had in previous games just wasn’t there tonight,” Trojans coach Devin Albertson said. “We weren’t meeting passes; we’d get the ball inside and we just weren’t going strong to the paint. It’s just the little things right now.”

Boswell answered Nodaway-Holt’s short run with five-straight points to put his team up by 29. The Trojans ended the first half with a small 5-2 run to make the score 44-16 at the halfway point.

“On the offensive end we executed a little better and we were in our spots,” Bluejays coach Rory Jackson said. “We’re still not seeing the floor good enough, but for us to be able to run our offenses against their zone, be in our spots and hitting cutters was a good thing.”

Boswell and Sherry led the team with 20 points, while Pride finished with 15.

“It’s easy when you’re able to move the ball around like that,” Sherry said. “Don’t get me wrong, they played great defense with that 2-3 zone and they get up on you. But whenever we’re all three on, it’s unbelievable what we’re able to do.”

DeVers led the Trojans with 14 points and Peter finished with seven. Nodaway-Holt will travel to Conception on Friday to face Platte Valley before hitting the road for the final time on Feb. 18 to face Mound City. The Trojans' final regular season game will be Feb. 20 against East Atchison.

“We’re playing two top-five teams in the state in our next two games and so it’s going to be tough for us,” Albertson said. “I just want to see them getting better and showing some fight against those teams because they’re both really good basketball teams.”

Northeast Nodaway will face the South Holt Knights on Friday. The Knights come in with a record of 11-8 this season.