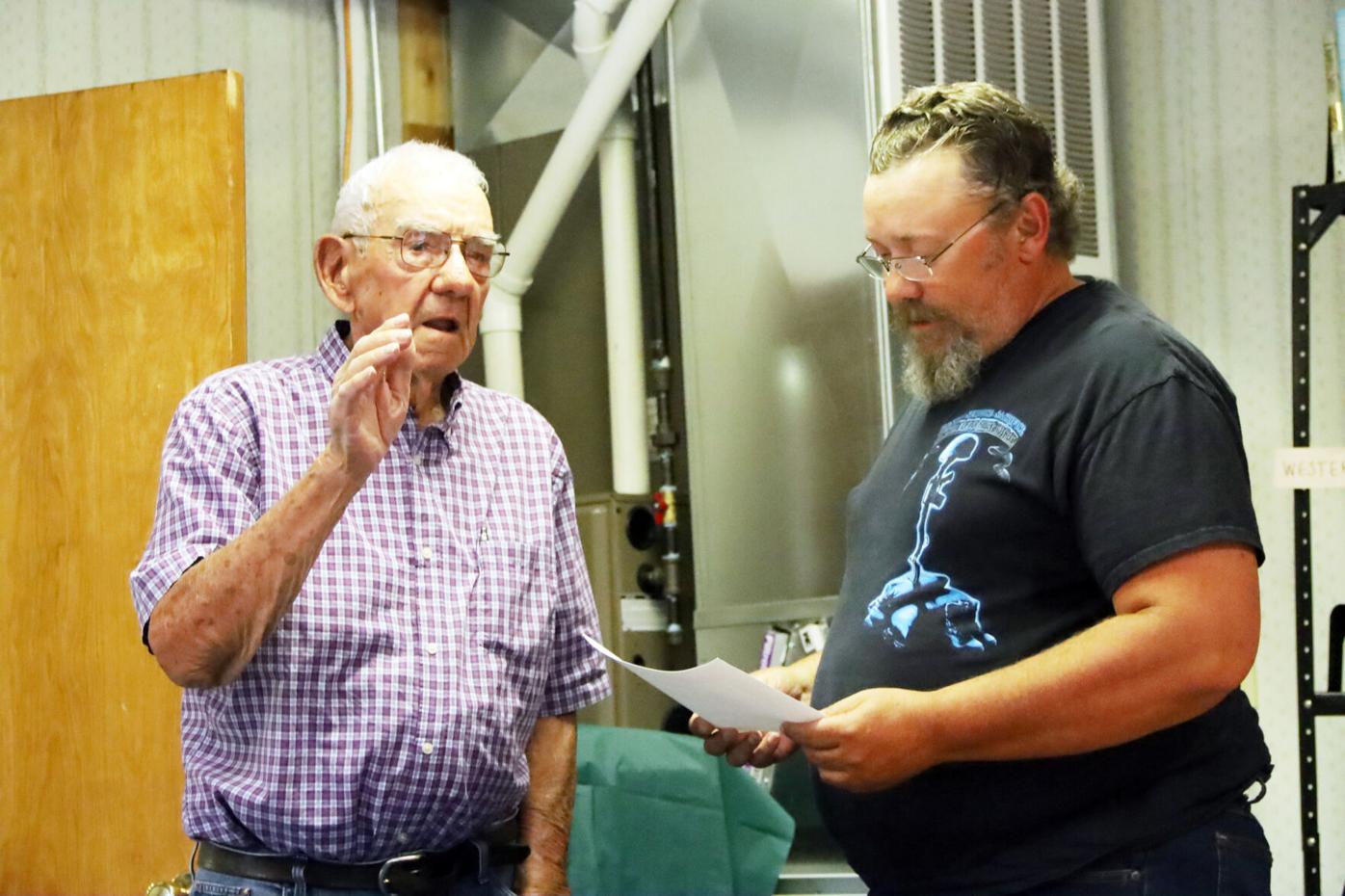 Acting Mayor Robert Manning, right, swears in new Alderman at large Marvin Sumy. Sumy was elected by voters in April to the Board of Aldermen, but stepped down due to being the city’s only available employee. Due to former Mayor Sandy Wright resigning in late May, Mayor Pro-tem Manning took the position and Alderman Jill Weiland will serve as new mayor pro tem and Sumy was sworn in to fill the alderman at large position.

The Skidmore Board of Aldermen discuss water meters at a June 10 meeting at Newton Hall.

Acting Mayor Robert Manning, right, swears in new Alderman at large Marvin Sumy. Sumy was elected by voters in April to the Board of Aldermen, but stepped down due to being the city’s only available employee. Due to former Mayor Sandy Wright resigning in late May, Mayor Pro-tem Manning took the position and Alderman Jill Weiland will serve as new mayor pro tem and Sumy was sworn in to fill the alderman at large position.

The Skidmore Board of Aldermen discuss water meters at a June 10 meeting at Newton Hall.

According to the minutes from that meeting, Wright turned over her resignation effective immediately to the Board of Aldermen all of whom were present at the time.

Wright cited personal reasons for her leaving the position.

As part of the shifting of duties, a seat on the board was open and Marvin Sumy was sworn in to fill the at large position.

Sumy had won the April 2021 election for an open seat, but stepped down to continue his city employee duties.

He will likely still help with duties around town, but not in the capacity he was previously working. In closed session on May 13, the city hired Tanner Chaney at a starting wage of $17 per hour and a $1.50 increase per certification earned. The city also hired Kylin Manning to weed eat part-time at a rate of $10.50 per hour.

At last week’s meeting, the board approved removing Wright from all banking and adding Wieland as a signer.

The board unanimously approved working with BP Meters, of Maryville, for the installation of brand new meters throughout town.

Seeking a way to upgrade the water infrastructure to assist with meter reading, Skidmore officials have been searching for the best way to accomplish it and had spoken with numerous meter providers about different systems.

Earlier in the year, BP Meters installed several water meters to allow the city to test the service. The board approved working with the company.

Co-owner Brock Pfost was in the audience June 10 and told the board that the city’s metering system likely wouldn’t last another decade, but didn’t press for a decision.

“Whether you go with our system or not, the system that you’ve got now is untenable for the next 10 or 15 years,” he told them.

Instead, the board quickly voted to work with the company and see the contract before making a final decision.

Wieland was hesitant to approve any deal without paperwork, but agreed to receive paperwork from the company.

Acting Mayor Manning noted that the plan would be to use funds the city is supposed to receive from the American Rescue Plan Act of 2021 to pay for the project. Pfost estimated a cost of around $1,800 for five units or $340-350 per unit, antenna and lid. That estimate doesn’t include the labor cost of installation or data plan.

Sumy mentioned it might be a good idea to wait until the city receives the funds before approving a contract.

Pfost told the board once the company is able to get started, the project could likely be completed within six to eight weeks.

“I’ll give Roger (Bundridge) the good news and get to work,” he said about putting together contract paperwork.

During a previous meeting, co-owners Pfost and Bundridge, told board members about the meters it would install.

Pfost told the board he was glad to see the city taking steps to upgrade its facilities, especially since the city appears to be battling water loss.

During the last few months, Skidmore City Clerk Meagan Morrow and Sumy have had a difficult time reconciling the amount of water purchased from PWSD No. 1 and how much has been sold to customers. Just last week Sumy’s water report noted a possible water loss of around 42,000 gallons.

Pfost noted that the new system has provided the district with accurate reads and helped them track leaks. He spoke at length with city resident Lou White who had questions about her own personal water meter and system.