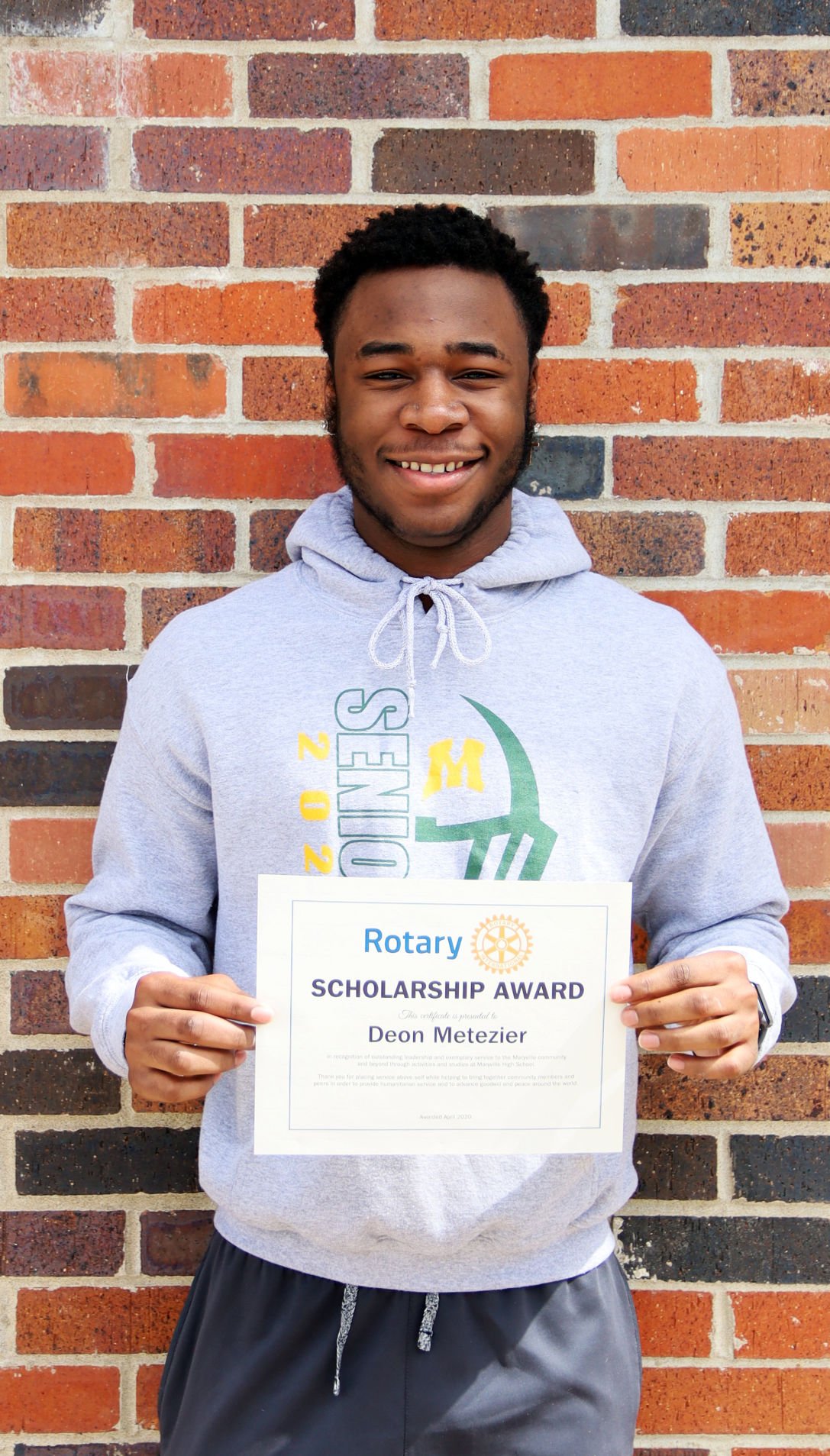 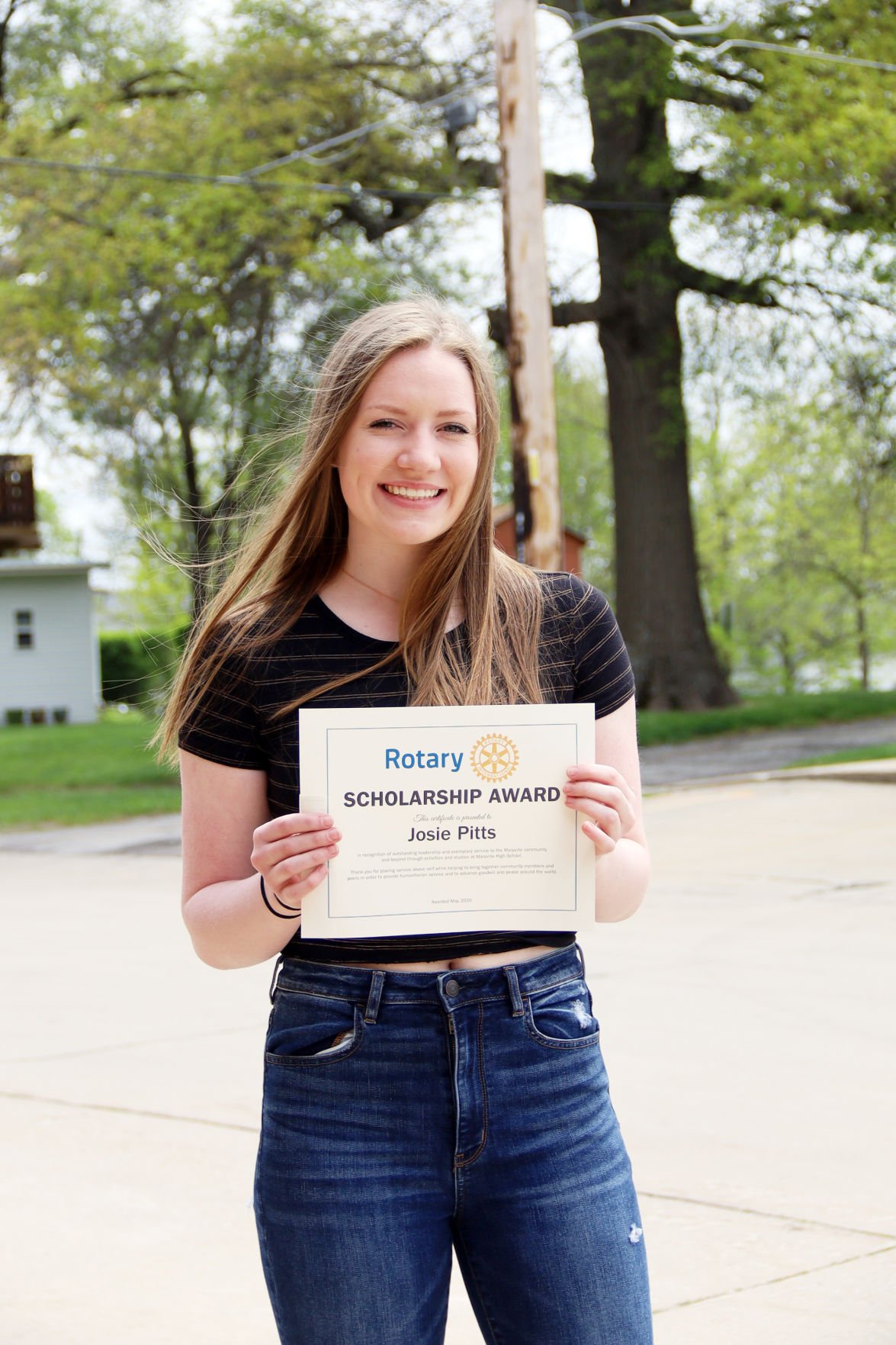 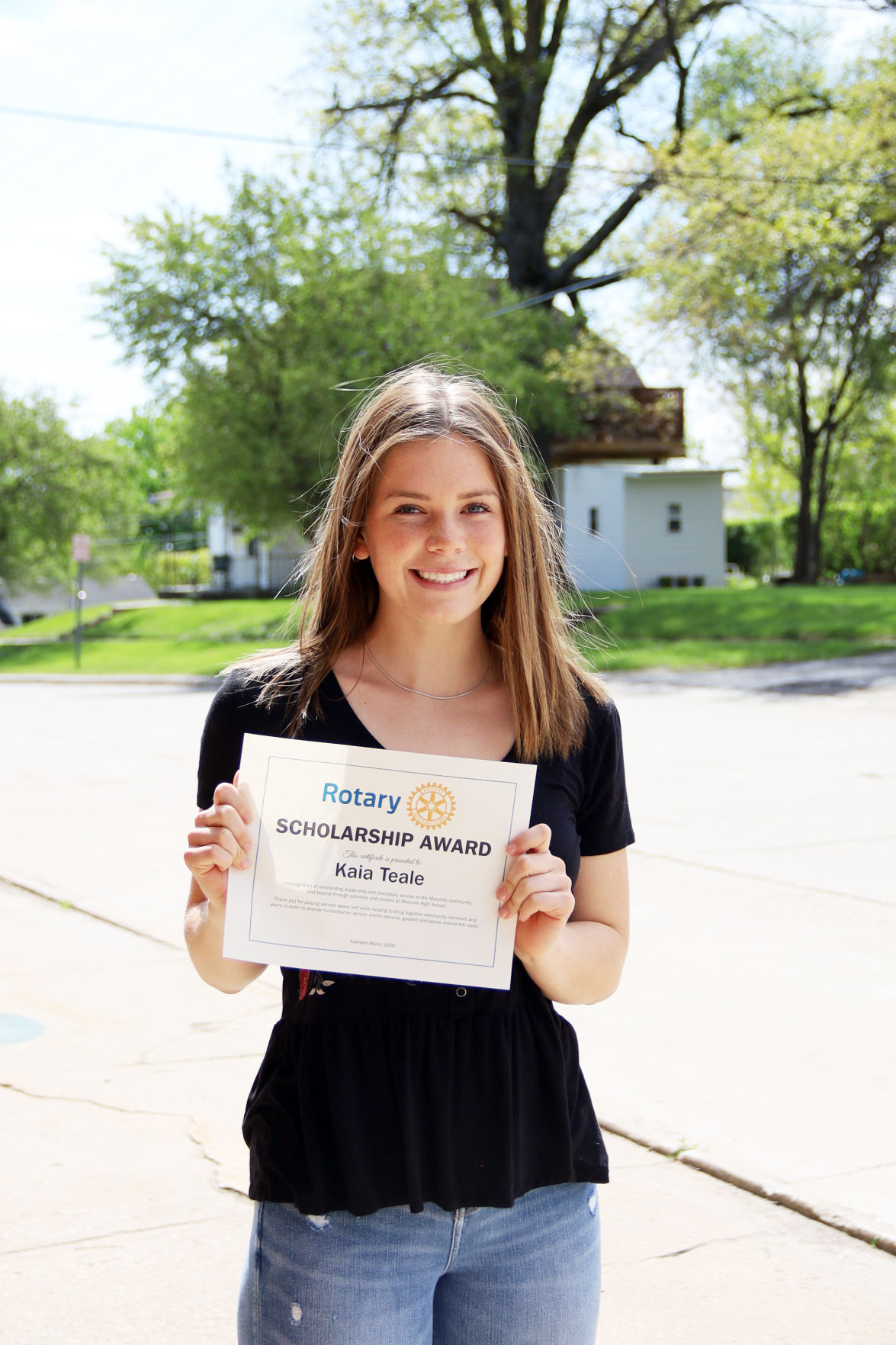 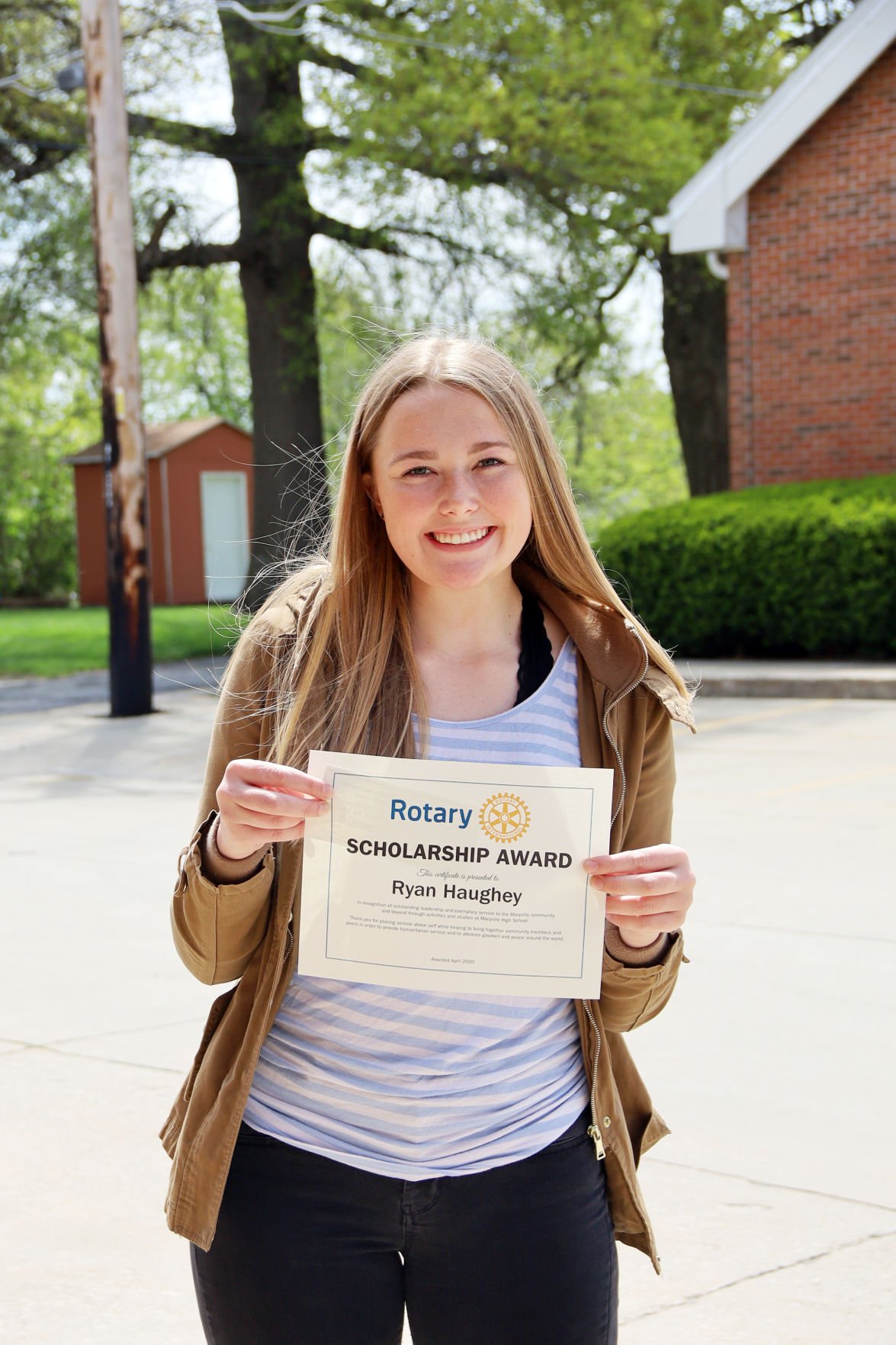 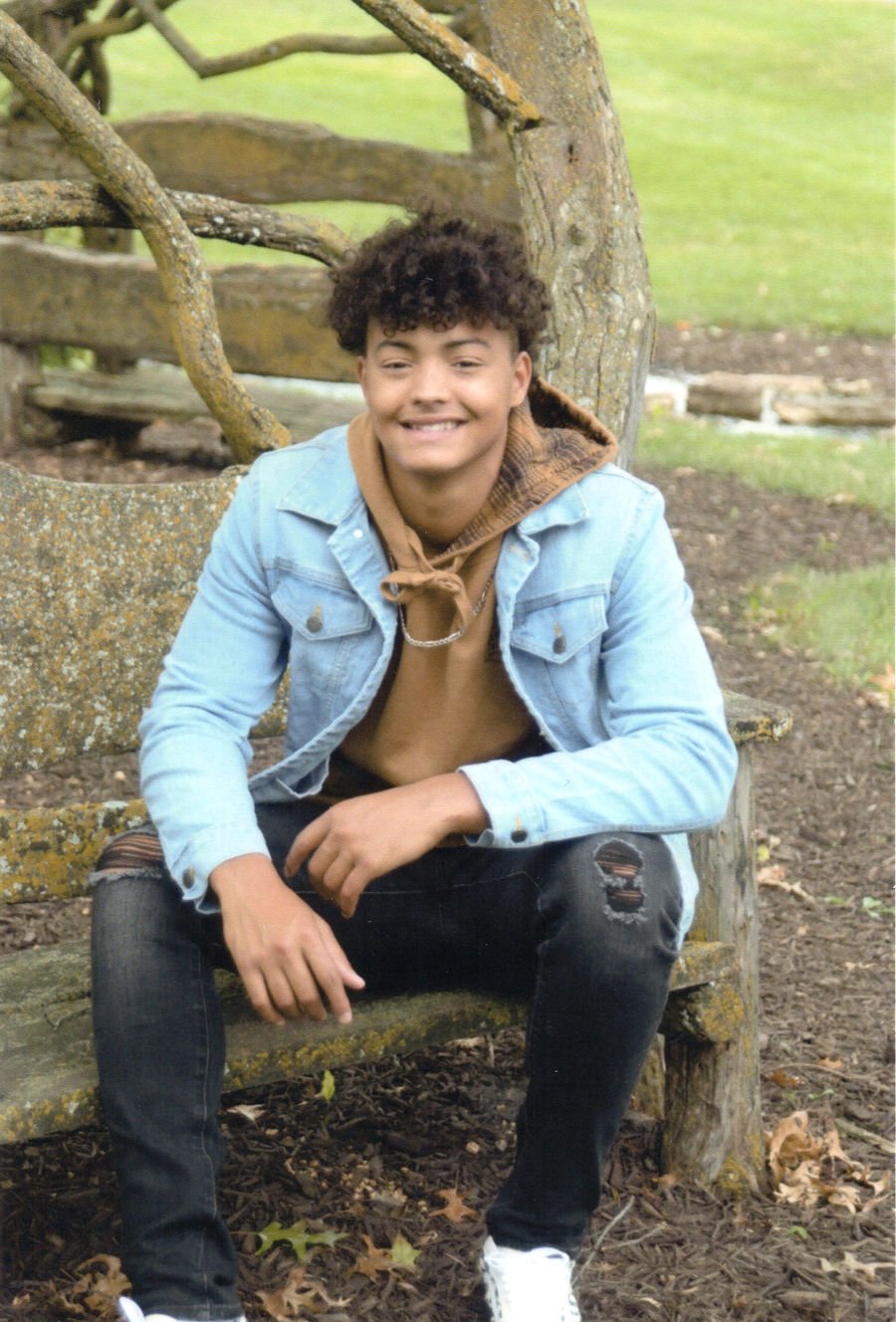 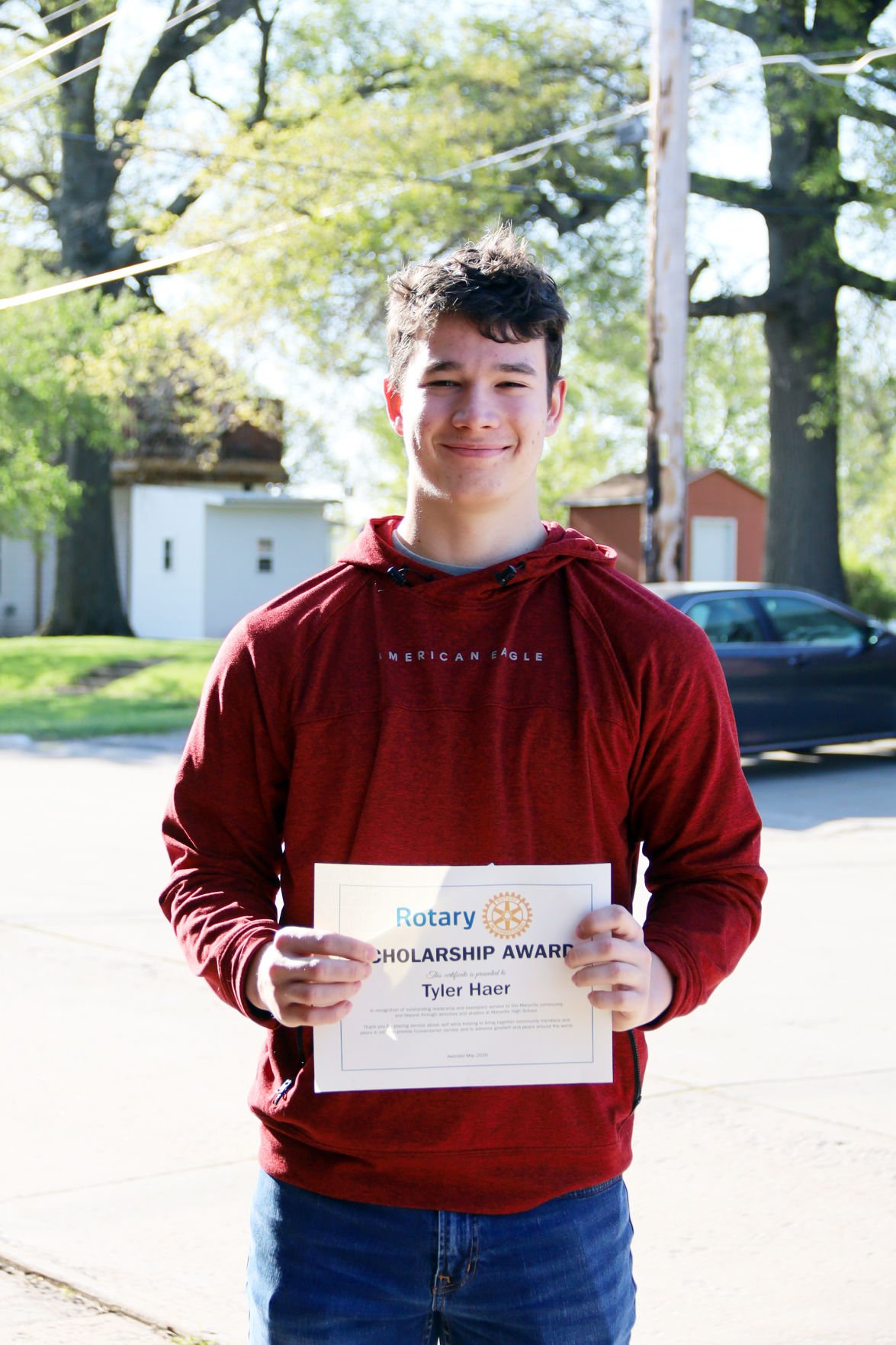 MARYVILLE, Mo. — Due to the COVID-19 pandemic, the Maryville Rotary Club is recognizing Students of the Month for March, April and May with scholarships and certificates.

Each student receives a certificate and a scholarship check for $100. The students also had the opportunity to apply for one of two larger scholarships from the club at the end of the year.

The students will not be recognized during a club lunch, because the club has not met in order to adhere to social distancing protocols. Each biography includes words in each student’s nomination letter. Normally they would hear the words of their nominators at the meeting.

Kaia Teale and Tylan Perry were named March students of the month.

Teale is the daughter of Adam and Anna Teale.

“Kaia is an excellent student and a great leader in her clubs and organizations,” according to her nomination. “She is vice president of Spectrum and is very reliable. She can be counted on for her honesty and promptness at all times. - “Kaia has excelled academically. She is a peer coach, mentor, soccer player and is involved in Spectrum.”

In the community, she has volunteered at Mosaic Medical Center – Maryville, The Ministry Center and coached soccer for Maryville Parks and Recreation.

After graduation she plans to attend the University of Missouri – Columbia honors college and major in nursing with the intention of becoming a nurse anesthetist.

“Too often we underestimate the power of a touch, a smile, a kind word, a listening ear, an honest accomplishment or the smallest act of caring, all of which have the potential to turn a life around,” is a quote from Leo Buscaglia and sums up Teale’s personal philosophy on life.

Perry is the son of Jennifer Munoz.

“Tylan is a quiet, kind and hardworking young man headed for a successful future,” according to his nomination. “He is positive and contributes well in the classroom and in basketball.” - “Tylan is an outstanding leader in his role of peer coach. He is a true role model, funny, hardworking, dedicated and above all respectful.”

He was active in high school basketball, as a special education peer mentor, and helps with FACT club activities.

In the community, he has helped with the Maryville Knights youth baseball league and maintained the field as well as helping at Vacation Bible School at the Maryville Church of Christ.

After graduation he plans to attend Missouri Western State University and study to become a physical therapist.

“Be a good role model to my peers, encourage others to be strong and independent and to help those in need,” he noted as his personal philosophy on life. “Christianity is also an important aspect of my life and the pursuit to follow God as best as I can.”

Ryan Haughey and Deon Metezier were selected as April students of the month.

Haughey is the daughter of Joseph and Brandy Haughey.

“Ryan is a hard worker with a high GPA, very bright with a good attitude, and a leader in color guard,” according to her nomination. “She was proactive last year when winter guard ended and formed a Winter Guard Club. She is involved in church, Future Teachers of America, Future Business Leaders of America, Octagon, International Club, as well as others. She is very polite, works hard, is reliable, is meticulous with attention to detail, takes challenging courses, and is always willing to help others. Ryan is very involved with band activities, National Honor Society and tennis.”

Within the community, she is very involved in her faith community, attending church at Laura Street Baptist Church and part of its youth group. She’s also tutored at Horace Mann Laboratory School. Haughey also volunteered at the animal shelter every week before the COVID-19 health crisis.

After graduation she plans to attend Northwest Missouri State University and major in financial services or mathematics. She hopes to eventually find a career in financial counseling.

“My personal philosophy on life is simply that there is nothing that will make us more joyful in life than knowing and following after Jesus forever.”

Metezier is the brother of Gordi Metezier and brother-in-law of Brittany Metezier. His parents names are Monique Augustine and Elorde Metezier.

“Deon has overcome obstacles in his life and always tries his best,” noted his nomination. “He quietly makes good decisions and is just a good decent human being!”

In high school, Metezier participated in football and track and field.

After graduation he plans to attend Iowa Western Community College for two years to play football then transfer to a four-year school.

“Seeing the chance to move with my brother for a better opportunity in being in a better academic environment to also be a student athlete,” is part of his personal philosophy on life. “Moving here, I was committed and consistent on everything I wanted to do.”

Josie Pitts and Tyler Haer were chosen as May students of the month.

Pitts is the daughter of Kevin and Jen Pitts.

“Josie works hard in class and extracurricular activities,” according to her nomination. “She has been an active member of Spanish for four years. I can always count on Josie to participate and follow through. She works well with others and has a positive attitude.”

In high school, she was active in Octagon Club, National Honor Society, the A+ Program, International Club, Future Business Leaders of America, volleyball, track and Fellowship of Christian Athletes.

Within the community, Pitts has volunteered with Toys for Tots, The Ministry Center, made gifts for nursing home residents, volunteered at the New Nodaway Humane Society, Lettuce Dream, Meals on Wheels, Adopt a Family and youth volleyball camp.

After graduation, she plans to attend Truman State University to major in communication disorders.

Haer is the son of Jason and Tiffany Haer.

“Tyler is honest, desires to do well, enrolled in tough courses as a senior and is involved in football, National Honor Society, robotics and tennis,” according to his nomination. “Tyler earns very high grades despite a rigorous schedule. He is always respectful and eager to help and participate. Tyler is also involved in football and tennis.” - “Tyler works hard without asking for or needing recognition. He never complains and doesn’t seek the limelight. He is a team player!”

In high school, Haer was involved in football as a captain, tennis, baseball, Fellowship of Christian Athletes leader, International Club.

Within the community, he taught and was a leader at Vacation Bible School and worked at Pagliai’s as a manager.

After graduation, Haer plans to attend Missouri University of Science and Technology at Rolla to become an architectural engineer.

“Help who you can by showing true compassion and understanding,” is his personal philosophy on life.