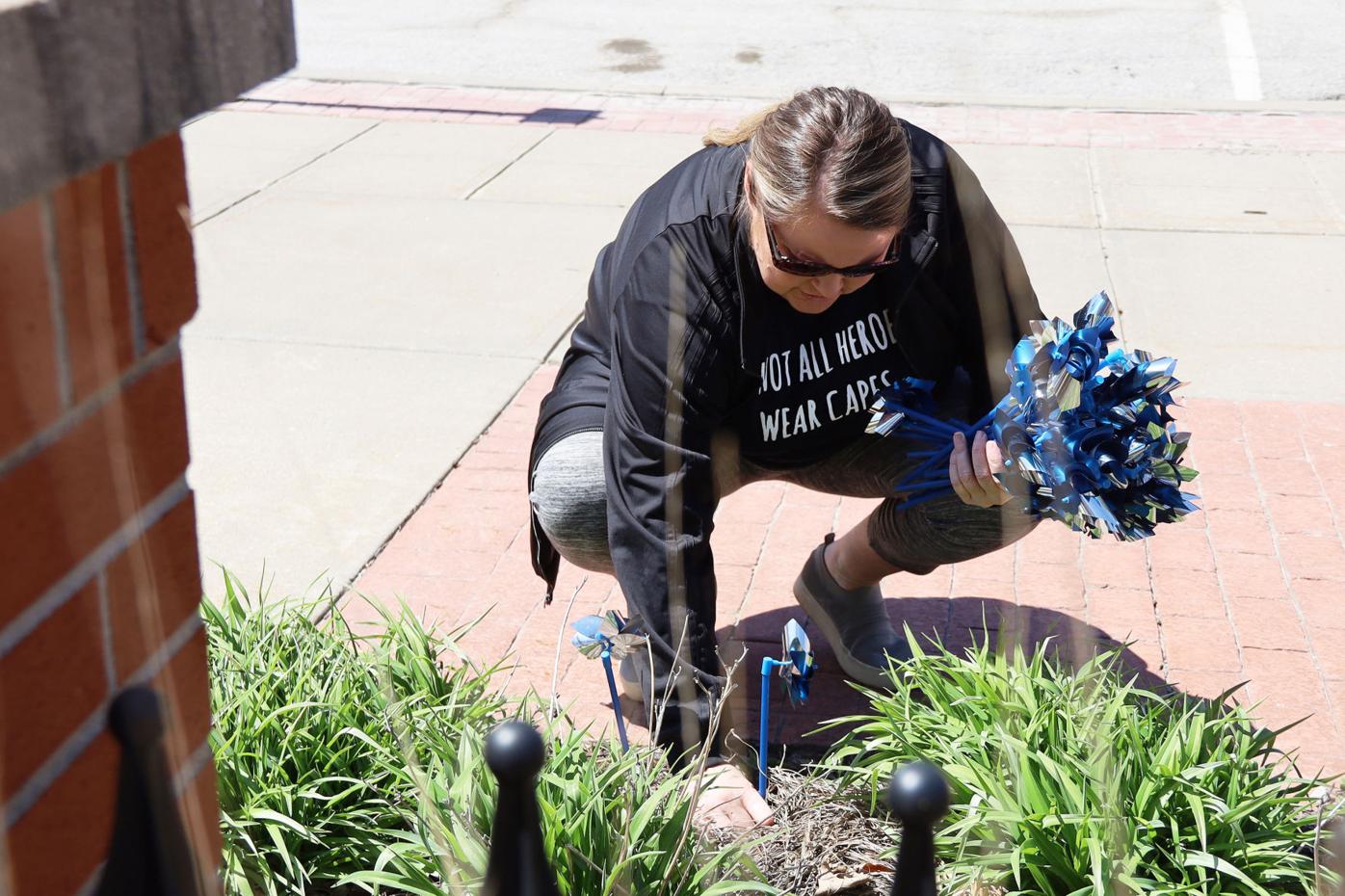 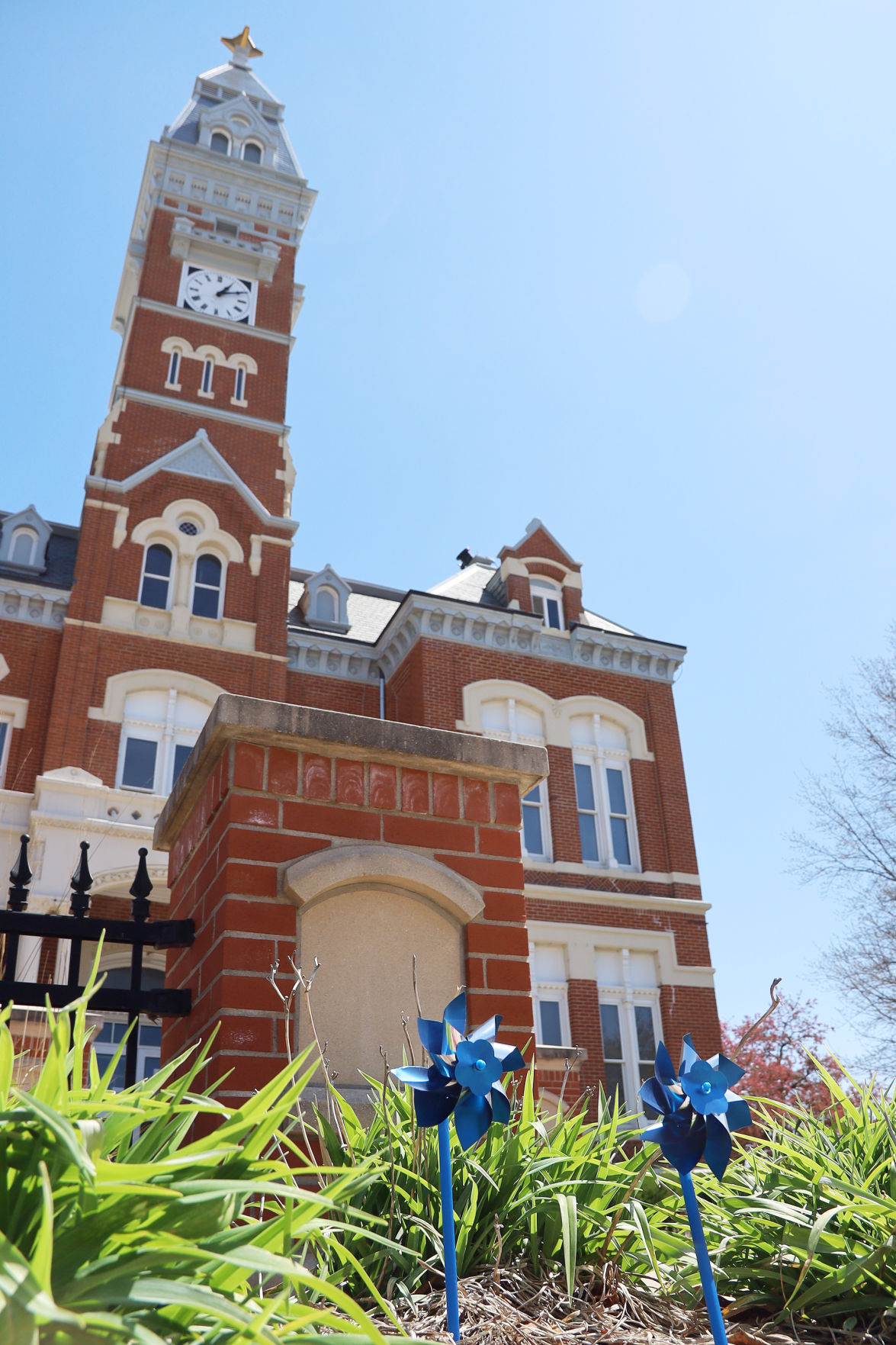 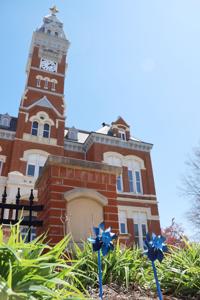 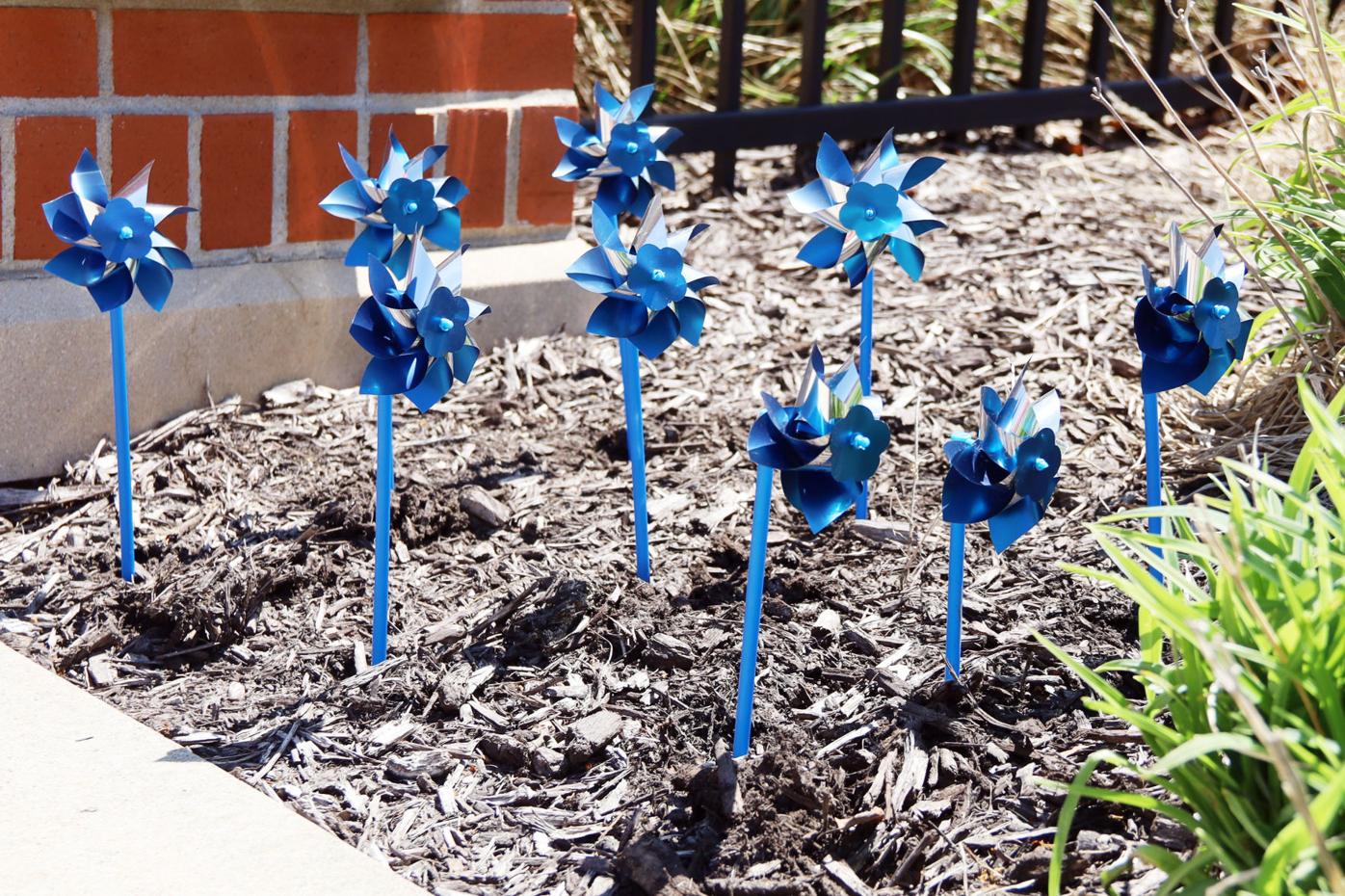 Blue pinwheels, otherwise known as “Pinwheels for Prevention,” became a national symbol for child abuse prevention in 2008, according to preventchildabuse.org. These are shown in the flower beds in front of the Nodaway County Courthouse.

Blue pinwheels, otherwise known as “Pinwheels for Prevention,” became a national symbol for child abuse prevention in 2008, according to preventchildabuse.org. These are shown in the flower beds in front of the Nodaway County Courthouse.

MARYVILLE, Mo. — Across the country, child abuse hotlines have seen a dip in reporting since the COVID-19 health crisis has shuttered schools and kept people quarantined in their homes. The same is true in Nodaway County, according to recent reports from the Missouri Department of Social Services Children’s Division.

“The division and department did notice an immediate drop in calls coming in through mid-March regarding the number of calls we were seeing at the hotline,” said Sara Smith, deputy director of the Children’s Division told The Forum by phone last week. “Typically around this time of year we would be receiving around 650 calls per weekday and that is cut in about half. At this point it is ongoing. We’re still seeing about a 50 percent decrease overall in calls during the week of what we would typically expect to see during this time.”

She attributed much of the statewide drop in calls to children being out of school and not being around mandatory reporters.

According to data from the Children’s Services Management Report published monthly by the DSS Children’s Division, statewide reporting decreased starting in March, the month that numerous schools began closing doors due to the COVID-19 pandemic.

To show the drop-off, data from January and February provides typical numbers. In January, 11 incidents or concerns were reported in Nodaway County. In 2019, 15 were reported. Statewide, 5,504 total incidents were reported during January, while a year earlier it was 5,440.

Gov. Mike Parson issued the statewide stay-at-home order that closed schools on April 6. Data from April is not yet available from DSS Children’s Division.

Smith said division members have been discussing the topic with community leaders to help raise awareness.

“Reports have dropped dramatically in the last few weeks,” she said. “We’re encouraging the community members and non-traditional types of reporters, those that are around kids in a different setting, so neighbors, it could be family members, friends of family to be checking.”

Some suggestions included arranging to wave at the kids from the curbside, or bringing by a card, while still adhering to social distancing practices. She said the division has heard about teachers and others using Zoom and social media as a way to connect with children at home.

“(Non-traditional reporters can be) creating some eyes on awareness and interaction to be supporting families during this unprecedented time, so figuring out creative ways to still be involved with kids,” said Smith. “Just as much support that we can offer families during this time and community members can offer is really important.”

Division workers still are working to help children, albeit in a different way sometimes in keeping with social distancing requirements.

“Assuring child safety is of the utmost importance to our team and to the division and our department,” she said.

Locally, Victoria Lager, circuit manager for the 4th Circuit Children’s Division, is working along with others from her office to raise awareness.

“This is my passion. This is what I’ve always wanted to do, work with families, with children,” she said.

The local office has 10 staff members, both investigators and case workers who investigate child abuse and neglect in the 4th Circuit Children’s Division: Nodaway, Atchison, Gentry, Holt and Worth.

“Our ultimate goal is reunification,” Lager said. “We work extremely well with our court, our judge, juvenile office … in the area. We have really good community stakeholders.”

She said the local office also provides internships to help others find their way into the field.

“You just need to have a passion to do this. It’s not about money. It’s about families and children,” she said.

“We are not in our offices right now, so yes, it has affected us,” Lager said.

Staff members are working from their own homes right now during the COVID-19 health crisis. They hold weekly meetings, but generally are in contact with each other daily.

“That can be very challenging,” she said. “Our reports are down, whereas some people might think that’s good — that is good — but it’s also nerve wracking because there’s things that are probably not getting reported.”

On Thursday, she placed blue pinwheels in garden beds in front of the Nodaway County Courthouse to help raise awareness of child abuse and bring it to the forefront of people’s minds. While the number of pinwheels doesn’t represent the exact number of children being cared for in the circuit, Lager said people should think of children when they see them.

Pinwheels became a national symbol for child abuse prevention in 2008 as part of the “Pinwheels for Prevention,” according to preventchildabuse.org.

“They should think of all the children that are being abused or neglected in the circuit (the office’s five counties),” she said. “In order to represent that we would need over a hundred of them.”

“The hotline is still operating 24/7,” Smith said. “We have team members there ready to take calls. … If you’re concerned about a child or family … go ahead and make that call because our team members at the hotline are still there accepting calls and our frontline investigators are still responding to calls.”

According to the Missouri Department of Social Services Children’s Division website, reporting child abuse is everyone’s responsibility and there are several things required when reporting abuse.

When making a report have the following: the name of the child, name of the parent(s), name of the alleged abuser and where the child can be located. Other questions will be asked of any person reporting abuse.

“Err on the side of over-reporting,” the state website notes. “If you have the thought, ‘Maybe I should call ...’ - Do!”

Not all calls to the hotline are determined to be abuse/neglect. However, the Children’s Division can often provide services and assistance that can help families prevent abuse.

The Children’s Division Child Abuse and Neglect Hotline is a toll-free telephone line that is answered 24 hours per day, seven days a week, 365 days a year.

Online reporting is also now available for mandated reporters only and should only be used to report non-emergencies.