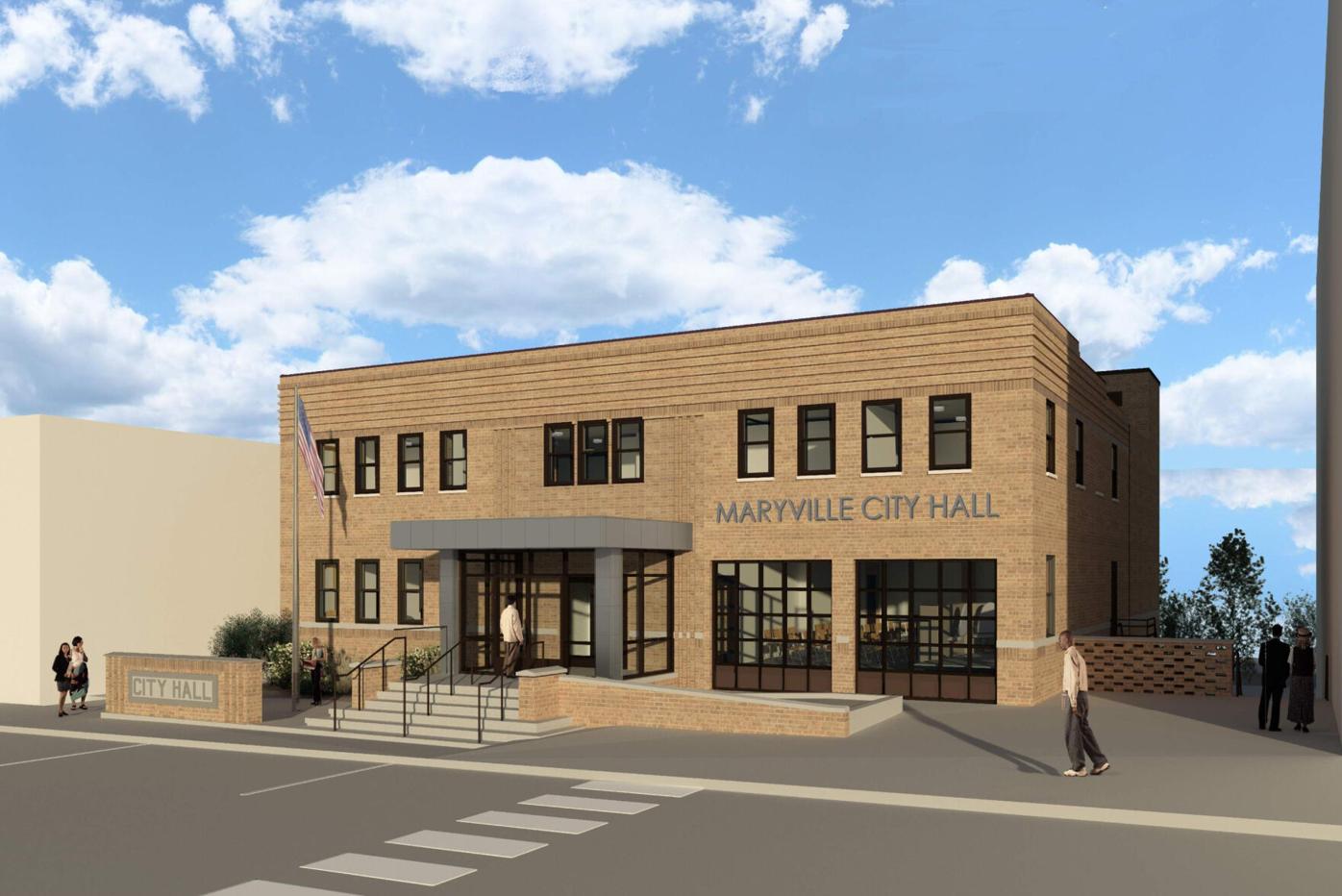 The front side, facing Market Street, of Maryville’s City Hall as it would look according to the schematic preferred by city officials of those presented by Strata Architecture and Preservation. The renovated building would receive structural and aesthetic upgrades, come into ADA compliance and keep historical elements that date back to its construction in 1938. 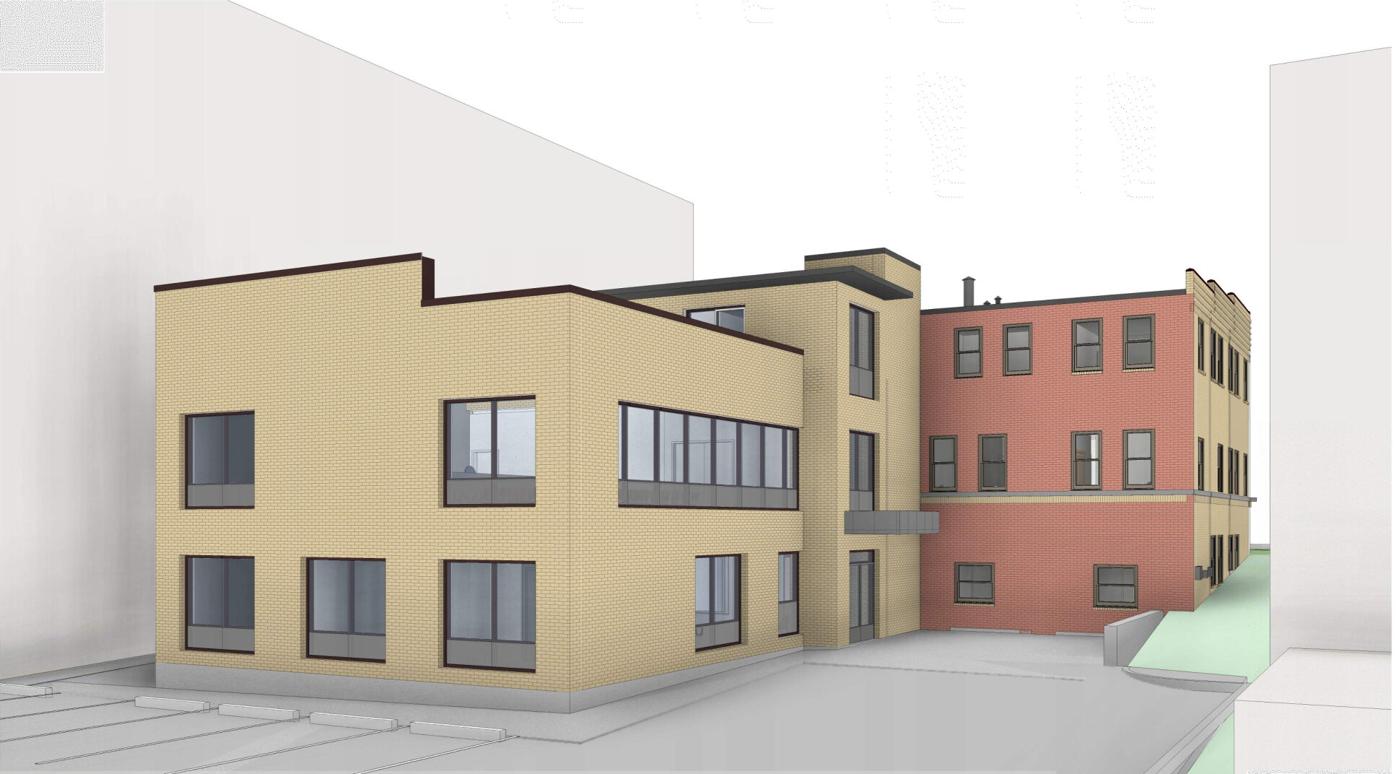 The back side of the renovated City Hall would feature a new, 6,000-square-foot expansion with a new public entrance and parking spaces. Inside, the existing building and addition would nearly double in size from what it is currently, including larger spaces for employees and a new City Council chamber.

The Black Pony Brewery, at the site of what was formerly The Hub at 104 E. 4th St., will benefit from a Chapter 353 tax abatement program through the city. The new restaurant, brewery and bar will feature outdoor seating a new second floor with residential elements.

The front side, facing Market Street, of Maryville’s City Hall as it would look according to the schematic preferred by city officials of those presented by Strata Architecture and Preservation. The renovated building would receive structural and aesthetic upgrades, come into ADA compliance and keep historical elements that date back to its construction in 1938.

The back side of the renovated City Hall would feature a new, 6,000-square-foot expansion with a new public entrance and parking spaces. Inside, the existing building and addition would nearly double in size from what it is currently, including larger spaces for employees and a new City Council chamber.

The Black Pony Brewery, at the site of what was formerly The Hub at 104 E. 4th St., will benefit from a Chapter 353 tax abatement program through the city. The new restaurant, brewery and bar will feature outdoor seating a new second floor with residential elements.

MARYVILLE, Mo. — Maryville city officials unveiled renderings of a new-look City Hall at the regular City Council meeting Monday, one of the city’s top priorities heading into this fiscal year.

The renovation and expansion plan presented would remake the existing space and add significantly more as well, rehabilitating a building first constructed in 1938 and showing its age.

The preliminary renderings — the schematic preferred by city officials among several presented by contractor Strata Architecture and Preservation — shown at the meeting put on display a more modern, structurally sound and practical building, designed in accordance with the city’s new downtown development guidelines. City leaders said they see the project as an opportunity to lead the way in demonstrating what the future of Downtown Maryville should look like.

The renovation and expansion has been a long time coming. A needs assessment in 2014 estimated that the city would need to nearly double the space available for employees to keep up with growth, and since then, the building has only continued to age, creaking along with water leaks, HVAC problems and other issues. For a time, a new City Hall was planned to be built alongside what became the R. Keith Wood Public Safety Facility, but the extra costs associated with the City Hall portion nixed that idea early on.

The full collection of renderings of the proposed renovation and expansion of Maryville's City Hall.

Now, with the public safety building completed and in use, City Hall is a top priority.

“To me it seems very similar to building the public safety building,” said City Council member Tye Parsons at a Sept. 24 budget meeting. “That was a project that was way overdue and it just didn’t meet our needs anymore, and now we finally moved into the future with that facility. I feel the same way about City Hall.”

The extensive renovations would give more than a facelift to the exterior, keeping existing historical signage, like the “City Hall” sign, but also centering the front entrance and putting the facility in ADA compliance. In front, larger windows would be added, contributing more natural light inside the building, among other aesthetic improvements.

At the back side, a new 6,000-square-foot extension would be constructed — nearly the size of the existing 7,000-square-foot building itself — and would include another dedicated public entrance. Indoors, a new central corridor would make for easier public access, including to a new, larger City Council chamber. Outside of the central corridor would be larger, more modern office spaces for employees.

All told, Strata estimated the cost to build what’s shown in the schematic at about $4 million, but City Manager Greg McDanel has made it clear that after the design process is completed, that number will likely be closer to $2.5 million than $4 million. That process will begin in earnest in November, and could yield a finalized design by February.

Once construction eventually begins — a possibility sometime in late 2021 — McDanel said that it will likely take about nine months to complete the renovation and expansion. During that time, employees would largely work remotely, something that McDanel said city officials have already become well-practiced in during the pandemic.

Council members also approved a redevelopment plan Monday that will provide tax abatement incentives to the owners of the future Black Pony Brewery, located at 101 E. 4th at the site formerly home to The Hub.

The brewery’s owners, Four Horsemen Properties, LLC, will see 100 percent tax abatement for the first 10 years and up to 50 percent for the following 15 years on real property at the location, taking advantage of the state’s Chapter 353 program through the city. The program is designed to incentivize redevelopment of “blighted” areas. A blight determination is made based on a variety of factors such as vacancy rates, assessed property values and other economic indicators.

In April, the city commissioned Ochsner Hare & Hare, a Kansas City firm, to conduct a blight study of Downtown Maryville, and the ordinance passed Monday determines that both the property that will become the Black Pony Brewery and the entire downtown overlay district as blighted areas. In the future, the city will extend similar Chapter 353 tax abatement incentives to new projects in the overlay district.

MARYVILLE, Mo. — Despite a plea from the City Council to cancel over COVID-19 concerns, the …

The new 7,200 square-foot restaurant, bar and brewery will be built with about $750,000 in private investment, city documents show. The project, when completed, will also feature outdoor seating and add a second story with “residential components.”

“I couldn’t be more excited about what you guys are doing,” said Council member Rachael Martin to the property owners. “I think that it seems like right now it’s really easy to focus on a lot of negative things that are going on. But this is a very clear positive for the whole community, and the fact that you’re cooperating with the city to make it, to think outside the box and get creative, that’s what’s going to make it attractive, I think, to a lot of people — is that it’s different. And I’m pumped.”

Brandon Jensen, one of the Four Horsemen present at the meeting on Monday, said that they hope to be ready by April.

All projects facilitated through the city’s Chapter 353 tax abatement incentives, including the Black Pony Brewery redevelopment project, will require adherence to the city’s downtown design guidelines, as will all new additions in the overlay district.

“We’re really excited about this project and believe it aligns with what we intend to do in downtown going forward,” McDanel said.

In addition Monday, the Council approved an agreement with Nodaway County Economic Development for $61,000 for economic development services.

The amount is functionally the same as last year’s contribution by the city, when it kicked in $66,000, but received $5,000 back as part of a deal to contract with Retail Strategies, a firm that focuses on retail development. That agreement — an annual $40,000 deal — remains in place through September 2022.

Altogether, the city has invested more than $100,000 in the two groups toward economic development efforts, with NCED, like most regional economic developers, focusing largely on manufacturing and other large employers. Retail Strategies was brought on last year to focus on retail.

Across the board, the city is continuing to hone its agreements with its partners, like NCED and the New Nodaway Humane Society. Prior to two years ago, the city had traditionally made donations to such organizations, rather than agreements for services, but city officials changed the practice to better align with state regulations. Since then, the city has been making its agreements more specific, and has asked for more transparency from its partners on how the city’s money is being used, and what benefits the city is seeing.

McDanel said that process will continue throughout this year with NCED as well, as the two entities will work to more closely define the services provided by NCED, which also serves all of Nodaway County, not just the city.