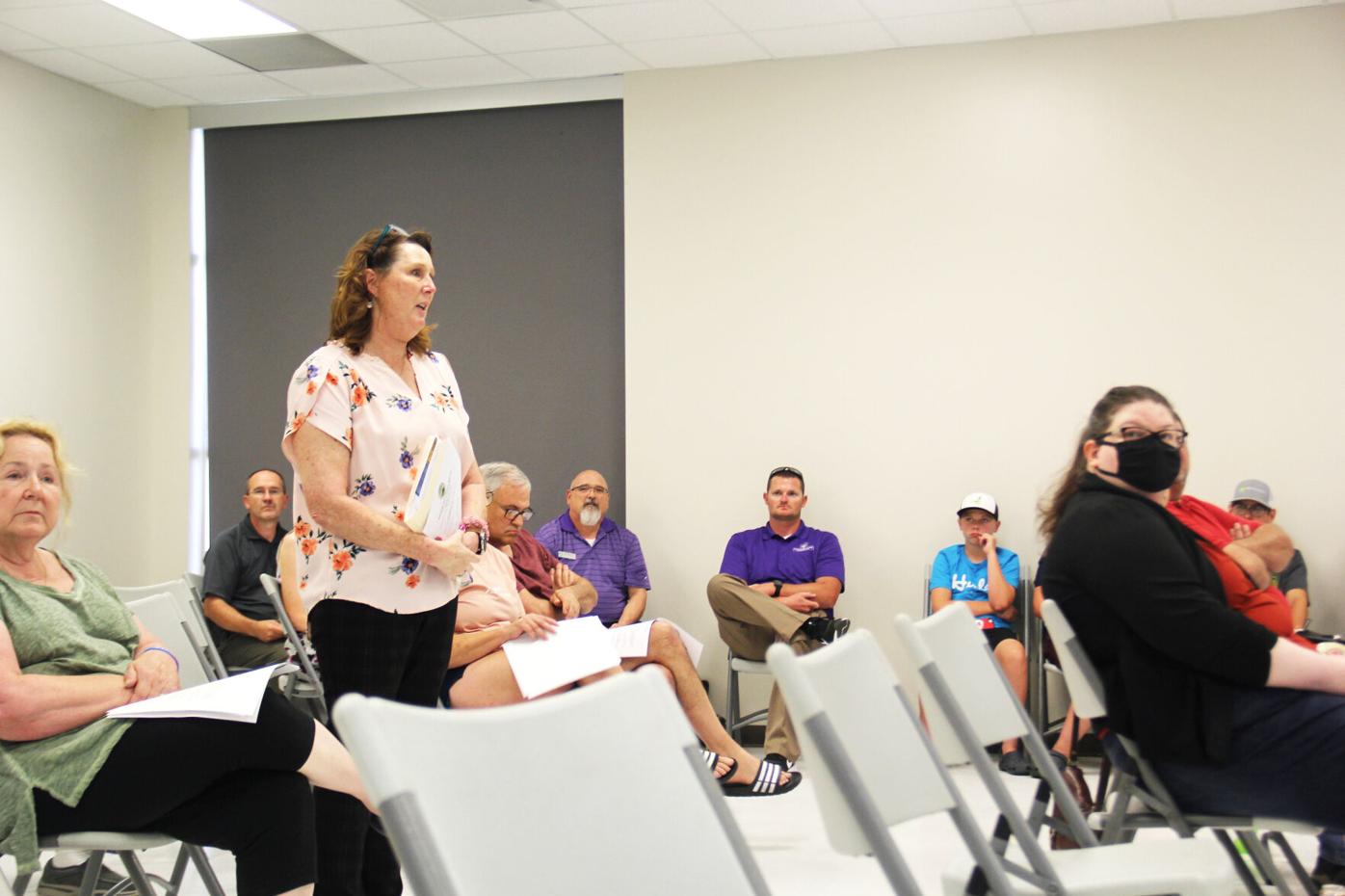 Renee Schlag, whose property borders the land leased to The Fields Paintball, asked the company and local officials to establish a buffer zone between her backyard and the paintball fields. The company will instead plant large trees along the border of the properties to mitigate noise and sight lines. 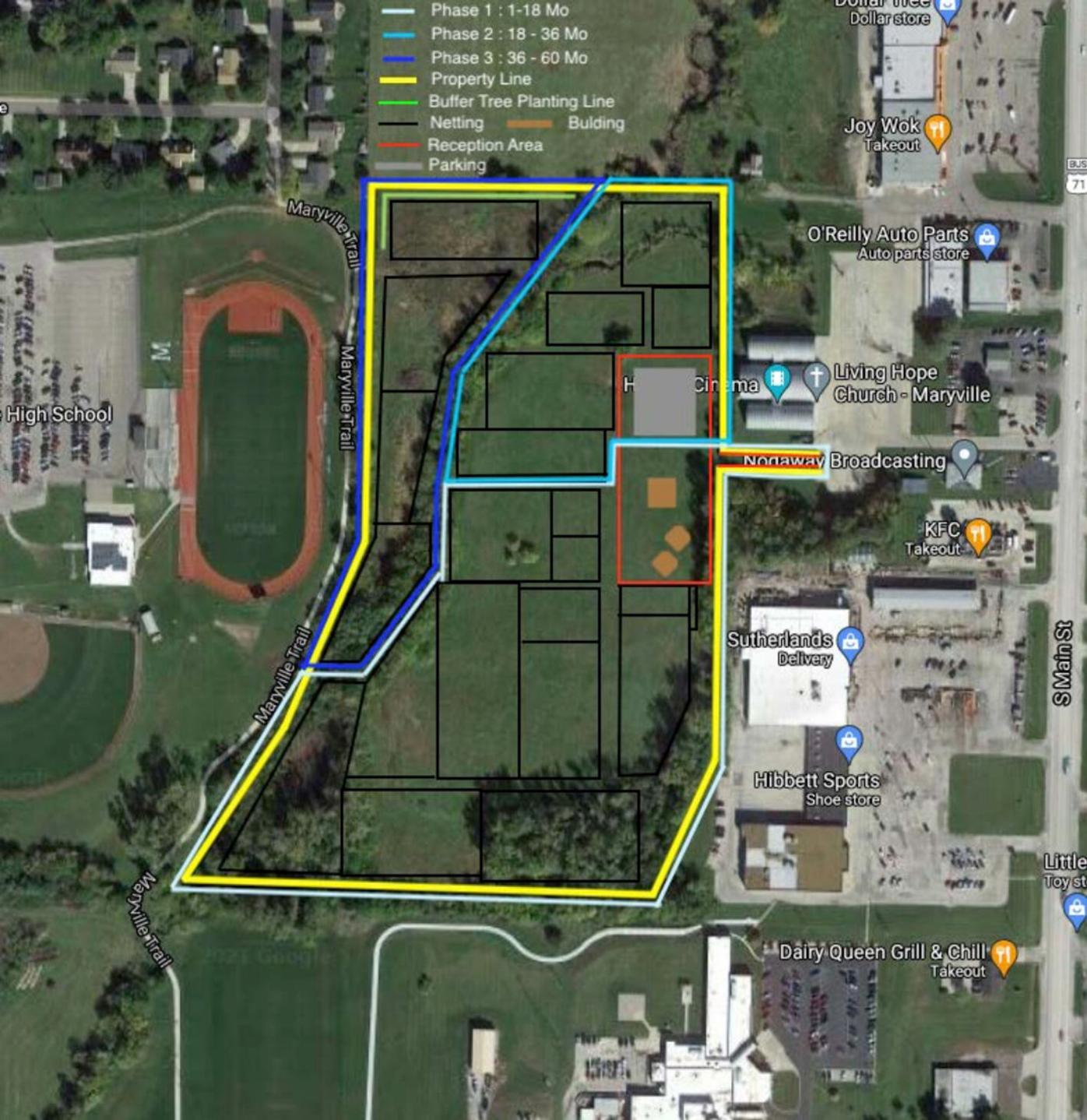 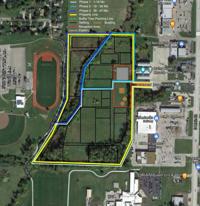 This map submitted to the city shows the phasing plan for The Fields Paintball’s proposed paintball fields. Rezoning of the area to allow for it to proceed was approved by the City Council unanimously on Monday.

Renee Schlag, whose property borders the land leased to The Fields Paintball, asked the company and local officials to establish a buffer zone between her backyard and the paintball fields. The company will instead plant large trees along the border of the properties to mitigate noise and sight lines.

This map submitted to the city shows the phasing plan for The Fields Paintball’s proposed paintball fields. Rezoning of the area to allow for it to proceed was approved by the City Council unanimously on Monday.

MARYVILLE, Mo. — A new paintball business is a go after the Maryville City Council on Monday unanimously approved a rezoning measure to allow The Fields Paintball to operate on land east of the high school football stadium and west of The Hangar cinema.

The rezoning was necessary because most of the 22-acre area was zoned residential. But council members agreed that the vacant land was better suited as a new, unique sporting attraction. Most attendees to the well-attended hearing were enthusiastically in favor of the business starting up in Maryville.

The owners, David Baker and Chelsey Clark, said they plan to develop up to 13 individual paintball fields on the property that will operate from 10 a.m. until dark, which would mean longer hours in the summer until 8 or 9 p.m. and closer to a 5 p.m. end time in winter.

Baker and Clark said they have not determined a target date for opening just yet, but told The Forum they’re “very excited” to have approval to move forward.

Entry to the park will be on the east side of the property, south of The Hangar, with a parking lot planned as well.

According to the council briefing packet, The Fields Paintball will surround each course with a 10-foot special net made to keep paintballs from going outside the area, and will further surround the entire property in a similar netting. Lighting will be restricted primarily to the proposed parking lot, but could be installed at a few of the fields if later converted into “tournament” fields.

In addition to the rezoning, the council also approved a change to the city’s municipal code having to do with the discharging of air guns. The change will now allow paintball guns to be discharged within city limits within commercially zoned areas used for recreational paintball, and will require safety equipment for players and warnings placed on the property. The new measure also makes it an ordinance violation for a paintball to be shot beyond the designated property boundary.

Under its agreement with the Maryville R-II school district, which owns the property, The Fields Paintball will lease the land for the next five years at a rate of $166.67 per month, or a total of $10,000 over the five years. The company has also agreed to purchase the land for $180,000 following that lease period.

During Monday’s meeting, Maryville R-II Superintendent Becky Albrecht told the council that the school district was desperate to offload the land, which it has owned for several years without finding a buyer.

“There has not been a lot of interest in that land, to be very honest with you,” Albrecht said. “But we do have interest from The Fields Paintball, and so we had some lengthy discussions with David and Chelsey — privately with myself and some administrators in the district — and then they came to a board meeting and talked with the school board. And we vetted them out very carefully with their plans and their intentions; it felt that it might be a good solution for the problem that we had: it was just 18 acres that was sitting there, tying up some of our money.”

The district had been paying for upkeep on the land to keep it from becoming an eyesore, Albrecht said.

Once the school board approved the lease and sale agreements in April, though, the plan did have its hiccups. Some neighbors voiced concerns about safety, but the concerns that came to the forefront during Monday’s public hearing on the rezoning were about noise and traffic for what The Fields Paintball hopes will be a bustling regional hub for the sport.

Renee Schlag, whose property abuts the proposed paintball field in the northwest corner, is the only property owner whose property directly borders the land. She said that more of her neighbors in the East Crestview neighborhood, north of the park in a zoned residential area, were similarly concerned. Although some of them attended, Schlag was the only one to speak at Monday’s meeting.

She said that she was in full support of the paintball park, and thinks it will be a great attraction for Maryville and a great activity. But she said she had proposed a buffer zone between her property and the paintball fields to help mitigate noise, the risk of any errant paintballs and to help retain some privacy in her backyard.

“We’ve all purchased in that area for that quiet, serene area,” Schlag told the council. “We enjoy the football games … because they’re playing once, maybe twice a week and it’s seasonal for four to five hours. Maybe twice a year because of track meets that come in the spring.

“(The Fields Paintball is) talking about running six days a week, possibly seven if their business is doing fantastic. … I know the decibel level is lower than what is required by city law, but … it’s still going to be annoying to those of us who like to sit out on the back deck in the evenings and enjoy that time and have our conversations with friends and family.”

Schlag had proposed a 324-foot zone, or about 1.68 acres in the corner near her home.

The company refused the proposal and plans to have no land buffer between the paintball fields and Schlag’s property, but did agree to plant several trees along the property border. Schlag’s property next to the northwest corner is nearest to the last phase of Baker and Clark’s proposed development plan. The pair said by the time they get to that section of development, the trees — Thuja Green Giant evergreen trees — will be large enough that they will be effective noise barriers, in addition to physical ones.

Baker said that he and Clark had considered the buffer zone but opted against it because it would have reduced the value of the potential purchase in five years, and if the zone was as large as Schlag had proposed, it would have resulted in the loss of two of the proposed paintball courses that are planned for development in 3-5 years.

“So we’re purchasing all this land at a fair market rate from (the school district),” Baker said. “… So if you break that out on a price per acre, we would be taking a hit. And it’s not also just about the value of the land split out like that, but it’s the value of the business. You have the economic impact on your company that if you just lopped all of this off for one person’s sake, you know, I guess to say, plainly, it doesn’t make sense from a business standpoint. But that’s why we’re doing everything that we possibly can to make sure that the neighbors are all treated well during the process.”

The buffer zone had proven to be one of the first roadblocks to the land’s rezoning when the Planning and Zoning Commission last month initially failed to get a second to the motion to approve the rezoning without a buffer. Ultimately, the recommendation passed 3-2 without any changes and went on to the City Council for Monday’s approval.

Albrecht, too, told Schlag during the meeting that the school board had talked about her concerns, but opted to support the proposal unchanged.

Schlag said she was disappointed that public officials at three levels — the school board, the Planning and Zoning Commission, and the City Council — seemed to make no serious attempt to address her concerns or work with The Fields Paintball on a compromise buffer zone, whatever the size.

“I guess my opinion would be, is if this is truly their passion, and if the school board truly wants it to happen, rather than upsetting a group of neighbors who have supported the Spoofhounds, and supported the school district, and continue to support the city, why aren’t we working to get along with our neighbors?” she told The Forum. “Why can’t they … refigure the dollar amount that they’re buying it for or they’re leasing it for? Negotiations happen all the time.”

Baker said the company is committed to continuing to work with neighbors on any concerns as the project moves forward.

“We’re not here to ruin somebody’s experiences,” he said. “We’re here to elevate those experiences.”