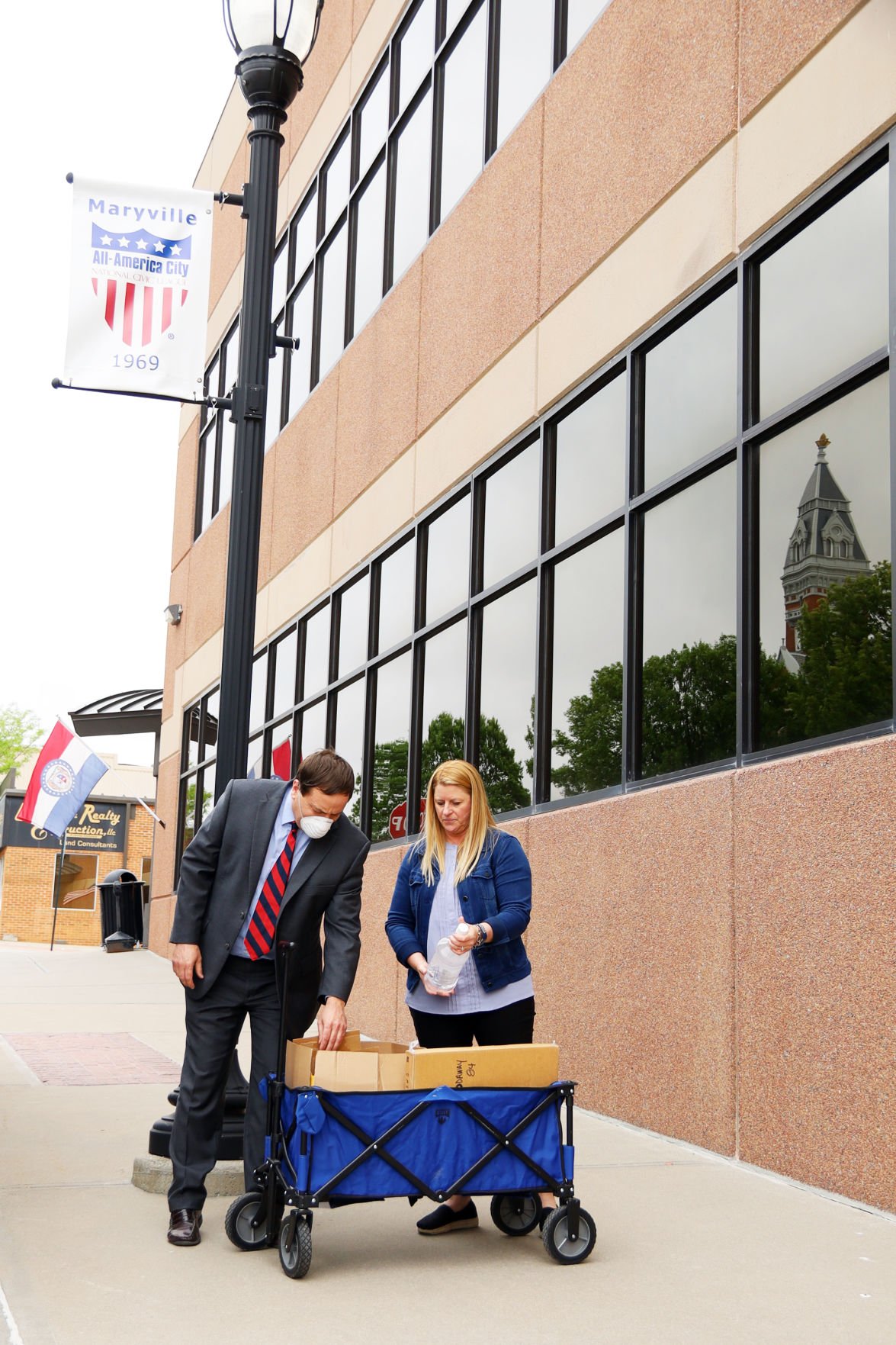 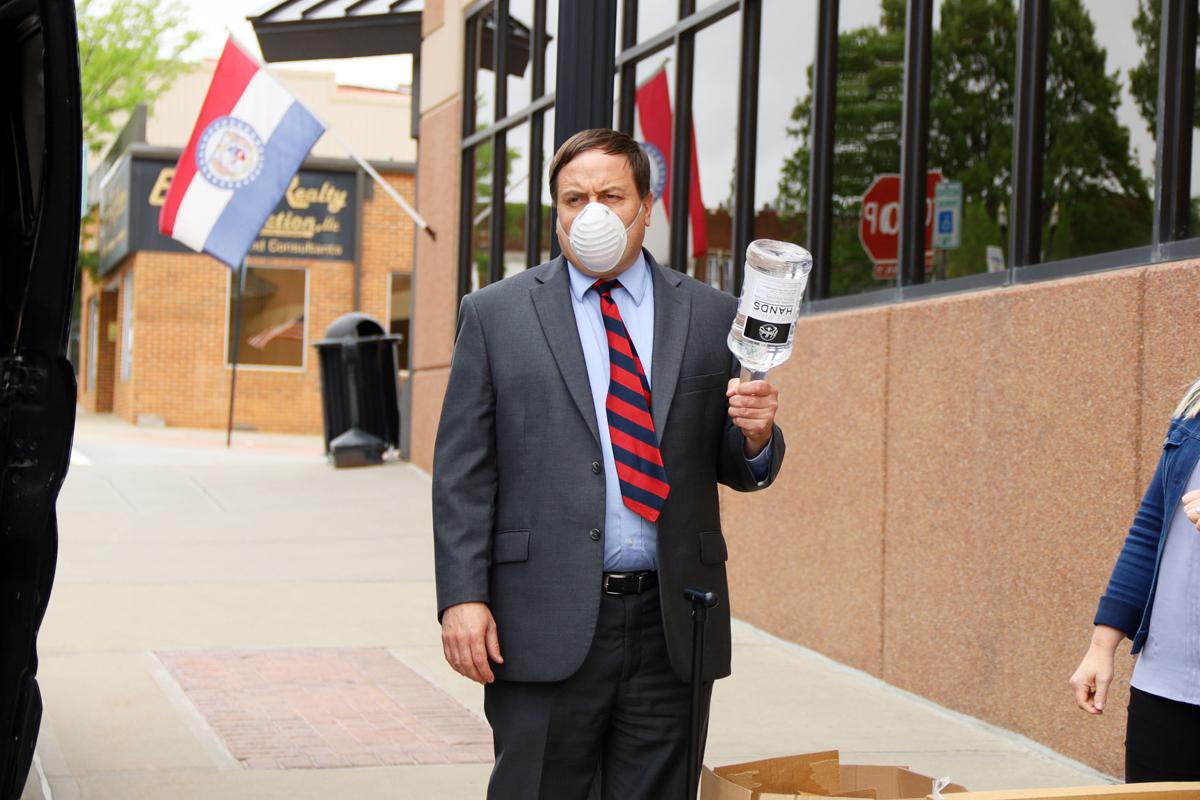 Missouri Secretary of State John R. Ashcroft holds a bottle of hand sanitizer created by Holladay Distillery in Weston, Missouri. He explained that the distillery switched from making liquor to bulk sanitizer during the COVID-19 health crisis. 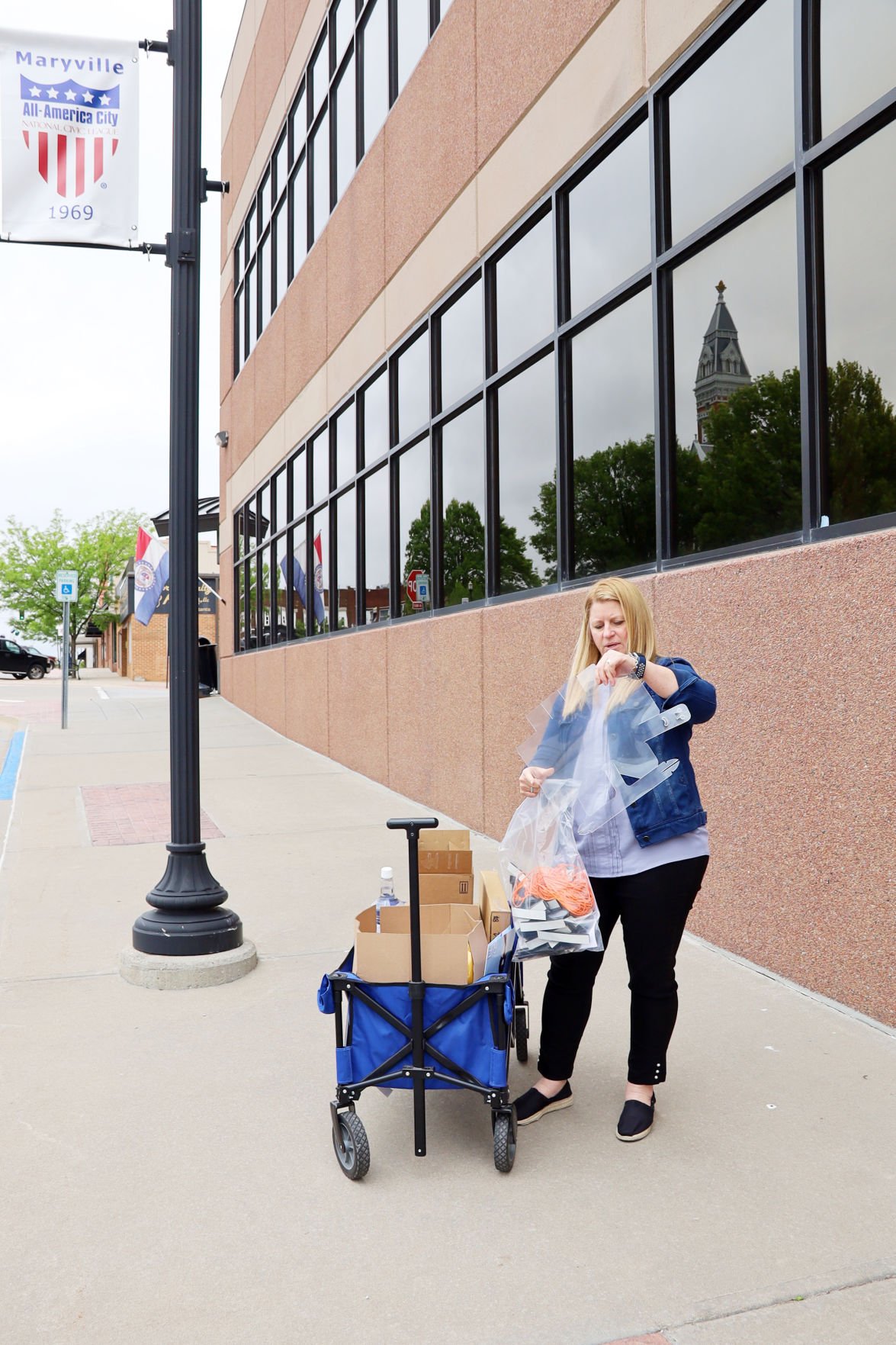 Missouri Secretary of State John R. Ashcroft holds a bottle of hand sanitizer created by Holladay Distillery in Weston, Missouri. He explained that the distillery switched from making liquor to bulk sanitizer during the COVID-19 health crisis.

The secretary started May 11, dropping off supplies including face masks, distancing strips, sanitizer, face shields and posters to local election authorities for their polling places in the upcoming 2020 elections.

“I think this will be the safest election they’ve ever participated in,” Ashcroft said. “We’ve never thought about worrying about this. In November we always have flu season. It kills 1,400, 1,500, 2,000 people a year depending on the year.”

He said that the state has never had to consider social distancing or marked where people should stand so they’re apart during an election.

“They’re (county clerks) getting little shields to stand up on the tables almost like you see at the bank where you slide it underneath it,” Ashcroft said. “I think that what the clerks are doing across the state is incredible. It’s going to be far safer to go vote than it is to go to the grocery store or frankly the other things you do in everyday life.”

The state ordered 17,000 to 19,000 face masks for delivery throughout the state. He believed they can be laundered up to five times, and asked that they be kept for the August election as well.

Ashcroft said 14 liters of sanitizer he brought Nodaway County is part of a large donation from the Holladay Distillery in Weston, Missouri, south of St. Joseph.

“They made enough for every election authority and they donated it free of charge,” he said. “We had actually reached out to them to purchase it. They agreed. They got it ready for us, said ‘You know what we don’t want to charge you.’”

He told Patton that Holladay (also known as McCormick) donated so much sanitizer that only specially trained personnel could transport that amount of flammable liquid.

“There was so much of it that we volunteered to go pick it up and it would have violated the Department of Transportation regulations,” Ashcroft said.

Patton asked if the sanitizer could be used to wipe down common surfaces, because that’s what the clerk’s office is most lacking. She said they only have eight bottles of sanitizing wipes.

“The wipes are very difficult to find,” Ashcroft said. He suggested buying the concentrated disinfectant. “It’s not quite as easy, but it will kill anything.”

Just updating the secretary, Patton told him that she has masks for election officials thanks to two local sisters, Sheila Smail and Sharon Adwell. The two created 75 cloth masks for election judges who don’t feel comfortable wearing the shields on election day.

She told him that a handful of poll workers did not want to participate in this election, but believed the county still to be well positioned for the upcoming election.

The county ordered shields made of LEXAN (a strong polycarbonate polymer) for the polling places from Maryville Glass and Lock. Patton explained that they were able to custom order so that the polling book will be able to slide under for signatures.

Wearing a mask, Ashcroft said he feels plenty safe traveling around the state to deliver the supplies.

“I wear my mask for other people,” he said.