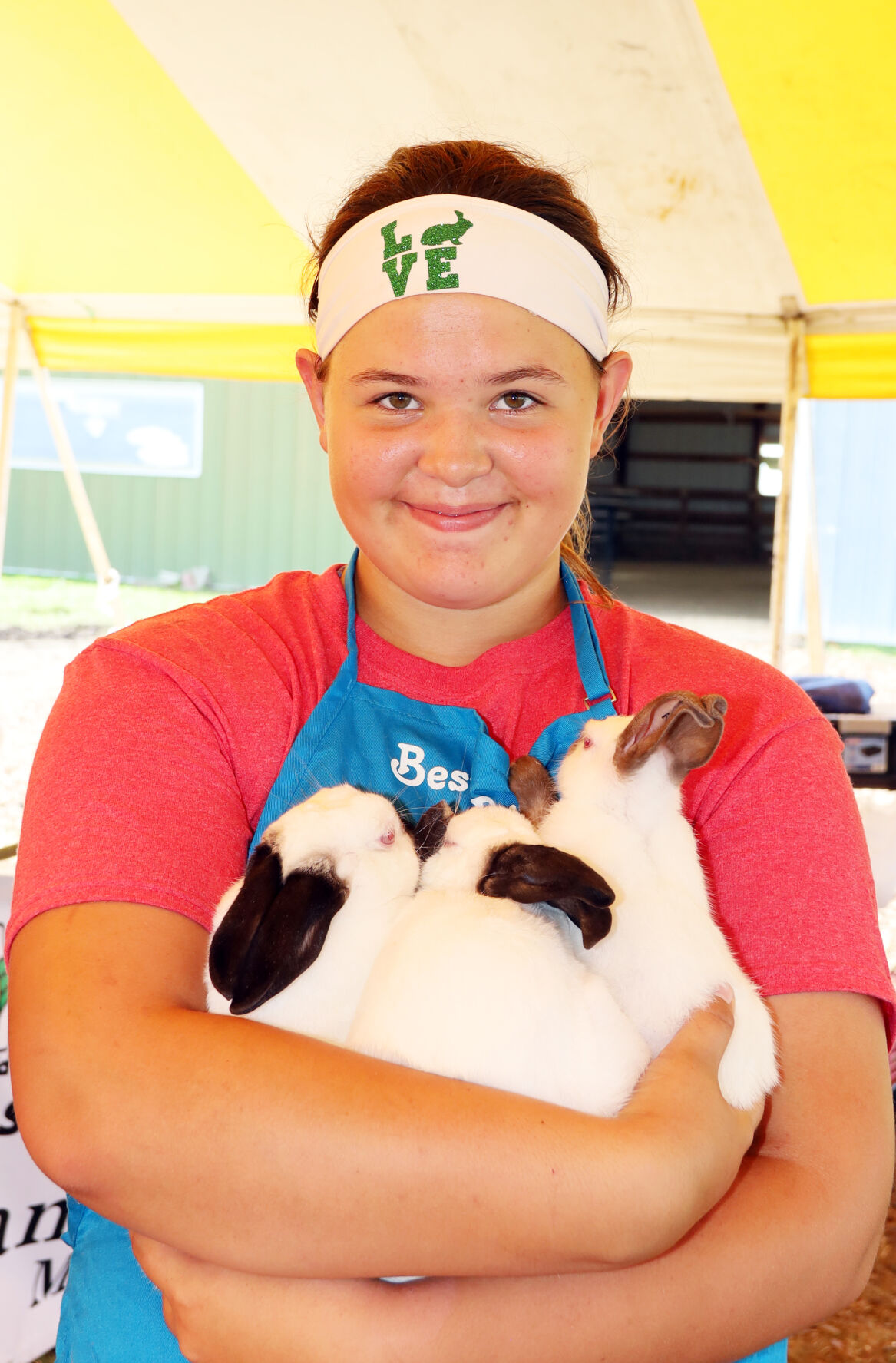 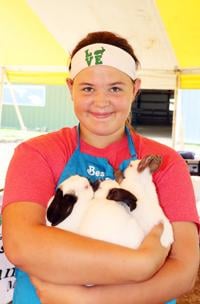 Dalanie Auffert and her friend Shelby McAvoy assist the host club by taking comments and class placings during the show.

Dalanie Auffert participates in the Showmanship contest at a county fair last year. She received Champion Showmanship in her age division. 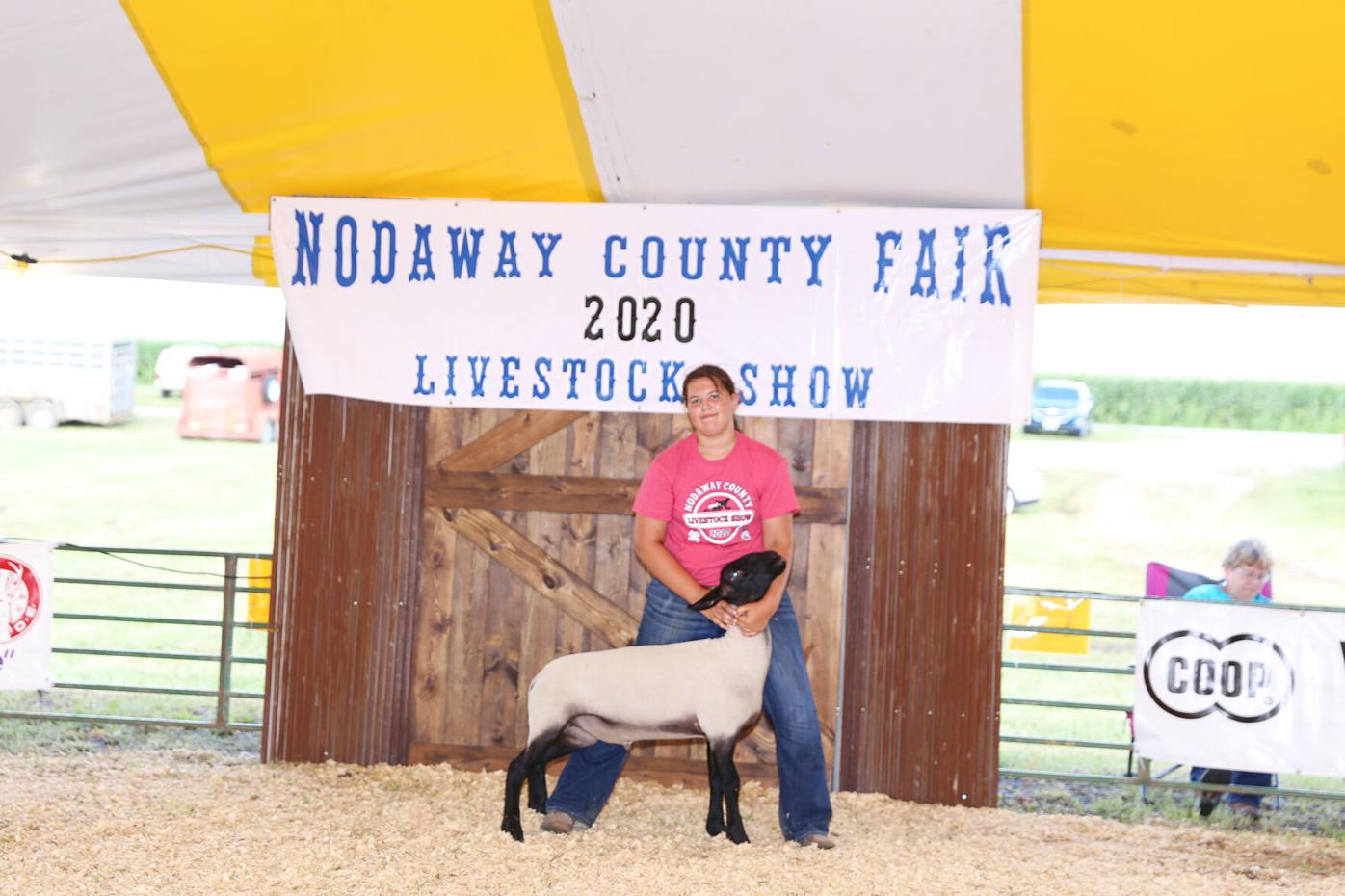 Dalanie Auffert and her friend Shelby McAvoy assist the host club by taking comments and class placings during the show.

Dalanie Auffert participates in the Showmanship contest at a county fair last year. She received Champion Showmanship in her age division.

MARYVILLE, Mo. — Shooting guns, basketballs and photos, local 4-Her Dalanie Auffert likes to stay active, both in school at Northeast Nodaway and in life. Add breeding rabbits and sheep, Science Olympiad, track and her American Legion Auxiliary duties, it becomes a little more obvious just how many irons she has in the fire.

Hard-pressed to pick a favorite activity, Auffert spoke longest about rabbits and what goes into purchasing, breeding and raising them.

“They kind of just multiply,” she said.

Auffert, a fourth-generation 4-Her and member of the Bluejays 4-H Club, raises two breeds recognized by the American Rabbit Breeders Association, of which she’s also a member. The rex is a gentle, affectionate, playful and intelligent breed that can grow to a weight of 7½ to 10½ pounds. The Himalayan is a rare, medium-sized breed with a white body and colored points. The ARBA recognizes black, blue, chocolate and lilac.

Auffert said she did have some that when bred ended up with colors she couldn’t take to contests. Explaining that when it happens she tries to find someone who wants a pet, but has eaten and enjoyed rabbit in the past.

Of the two breeds, Himalayans are her favorite because “They’re docile and have personality,” she said.

In April she has the 2021 Himalayan Nationals in Biglerville, Pennsylvania and the Heart of the Ozarks Rex Rabbit Club National Show, this year being held in Sedalia, Missouri. In Sedalia, Auffert will also help set up and run the event, because it’s being held in her home state.

Gaining experience at every event, she also runs Honey Creek Hoppers Rabbitry, which can be followed on social media.

Last weekend she took part in two different shows: one in Palmyra, Missouri, where she had rabbits place Best of Breed and Best Opposite in both breeds with completely different rabbits. The other show was in Maquoketa, Iowa, where several of her rabbits received "Best of" in their varieties.

Each year, she also takes part in the Nodaway County Livestock Show showing her rabbits and sheep as part of her 4-H group.

With sheep, Auffert is no less knowledgeable about her animals. She told The Forum last week that with sheep the competition is all about the rate of gain (weight), meat quality and animal structure.

Learning about her animals through 4-H ties in nicely with Auffert’s participation in FFA in school. She raises sheep as part of her Supervised Agricultural Experience gaining production proficiency and entrepreneurship skills.

The day-to-day chores of raising animals is nothing new to Auffert whose family has been involved in the program for generations.

“I’ve been in it since I could walk,” she said laughing.

Dana Auffert, her mom and Nodaway County 4-H youth program associate, clarified that it was only since she was 5 years old, and that it’s her family line that Dalanie is in the most recent generation.

“I just really enjoy the fact that my children were able to continue on with the multi-generation in my family,” she said. “This is truly a family thing for me.”

With her dad Damian and two brothers, Dalton and Dakota, the family enjoys helping each other succeed and share their knowledge with friends through 4-H and FFA. The two men have since graduated from the program.

Dalanie said she has friends in school who know more about sheep and rabbits “than they probably want.”

But 4-H is not only about raising livestock for Dalanie.

“It’s fun to meet new people and see what they like to do,” she said.

Dalanie also paints and makes crafts for local and state contest. She painted a cow skull with a sunset and windmill for a previous competition.

She also takes part in 4-H Shooting Sports. Dalanie shoots a .22 and a 12-gauge shotgun and gets to practice “when it’s nice outside,” she said.

For those not interested in animals or firearms training, 4-H offers a lot of options, photography being one of them.

Dalanie said she takes photos of her animals, “and stuff.” She described one featuring a chicken wire fence with frost on it.

Shooting with an iPhone 11, Auffert likes to go for walks outside and take photos of what she sees.

“It’s almost more artsy, and has more of an artistic flow than a portrait,” Dana said her daughter’s photos. “She’s had several selected for state fair.”

Dalanie also is a starting freshman on the Northeast Nodaway basketball team. The 5-foot, 10-inch, post player attributed her height to her dad who is 6 feet, 9 inches tall.

“My dad taught me, our team,” she said of her first years learning the sport. Auffert plans to play, “as long as my ankles and knees allow.”

Dalanie plans to continue showing her rabbits and sheep in various contests in the upcoming show season to make up for last year’s somewhat lesser one due to the COVID-19 pandemic.

“There’s things that I think we missed out on,” she said, but thanks to social media Dalanie has been able to stay connected to her community of rabbit enthusiasts and stay on track for this year’s shows.

For more information about 4-H in Nodaway County visit extension.missouri.edu/counties/nodaway/4-h.