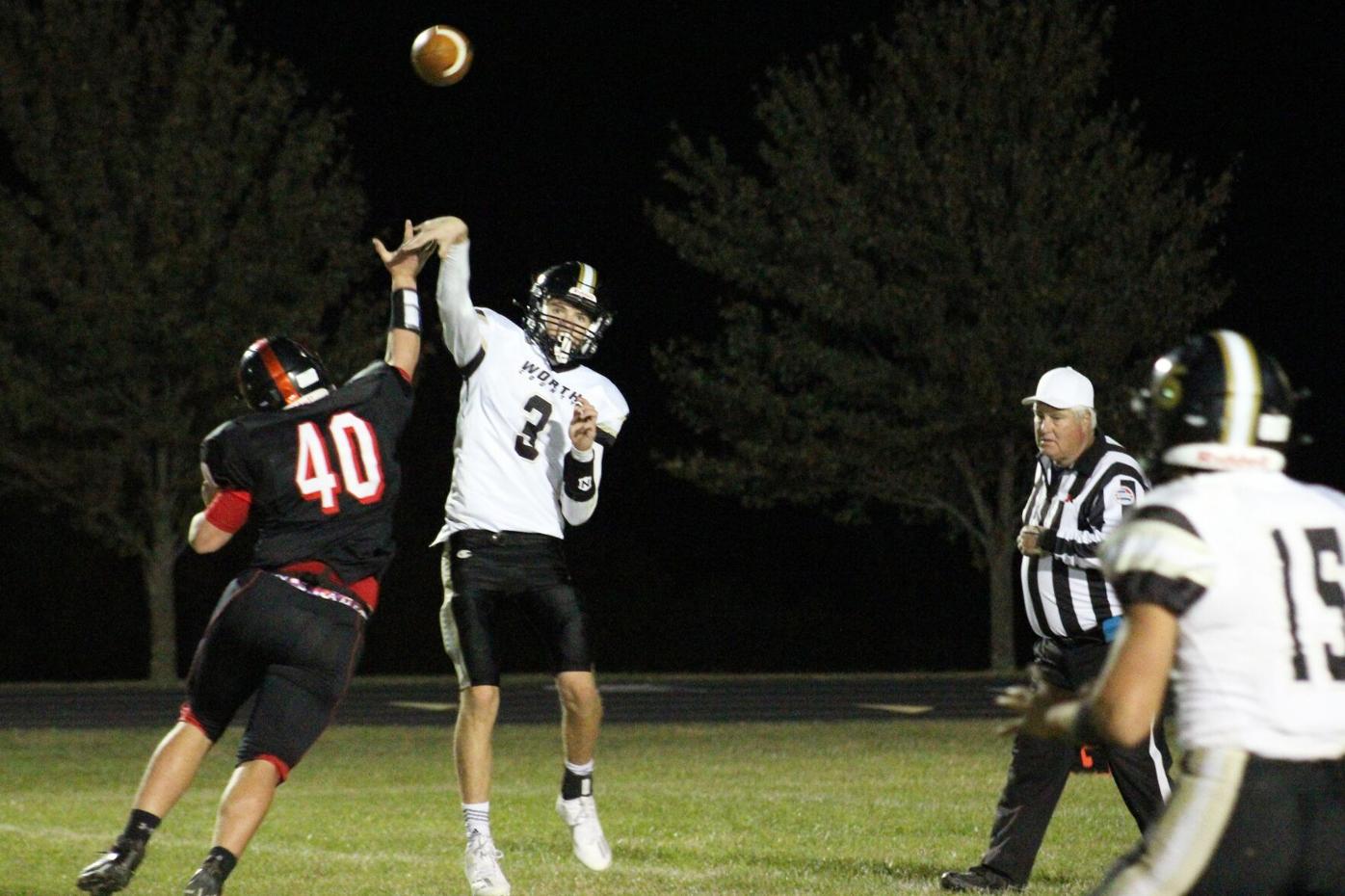 Worth County's Ayden Gladstone throws a pass to Andrew Alarcon on Friday night against North Andrew in Rosendale. 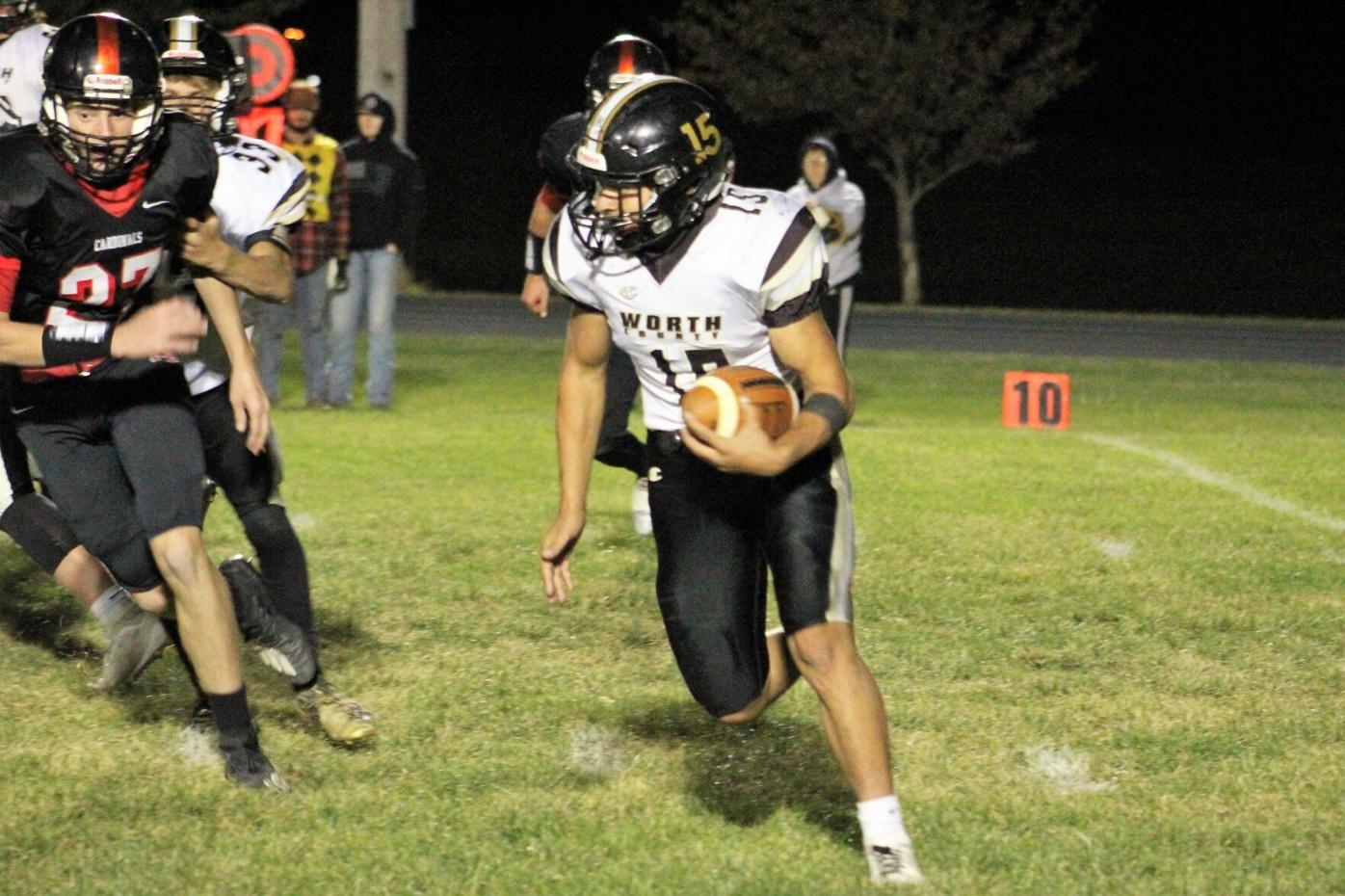 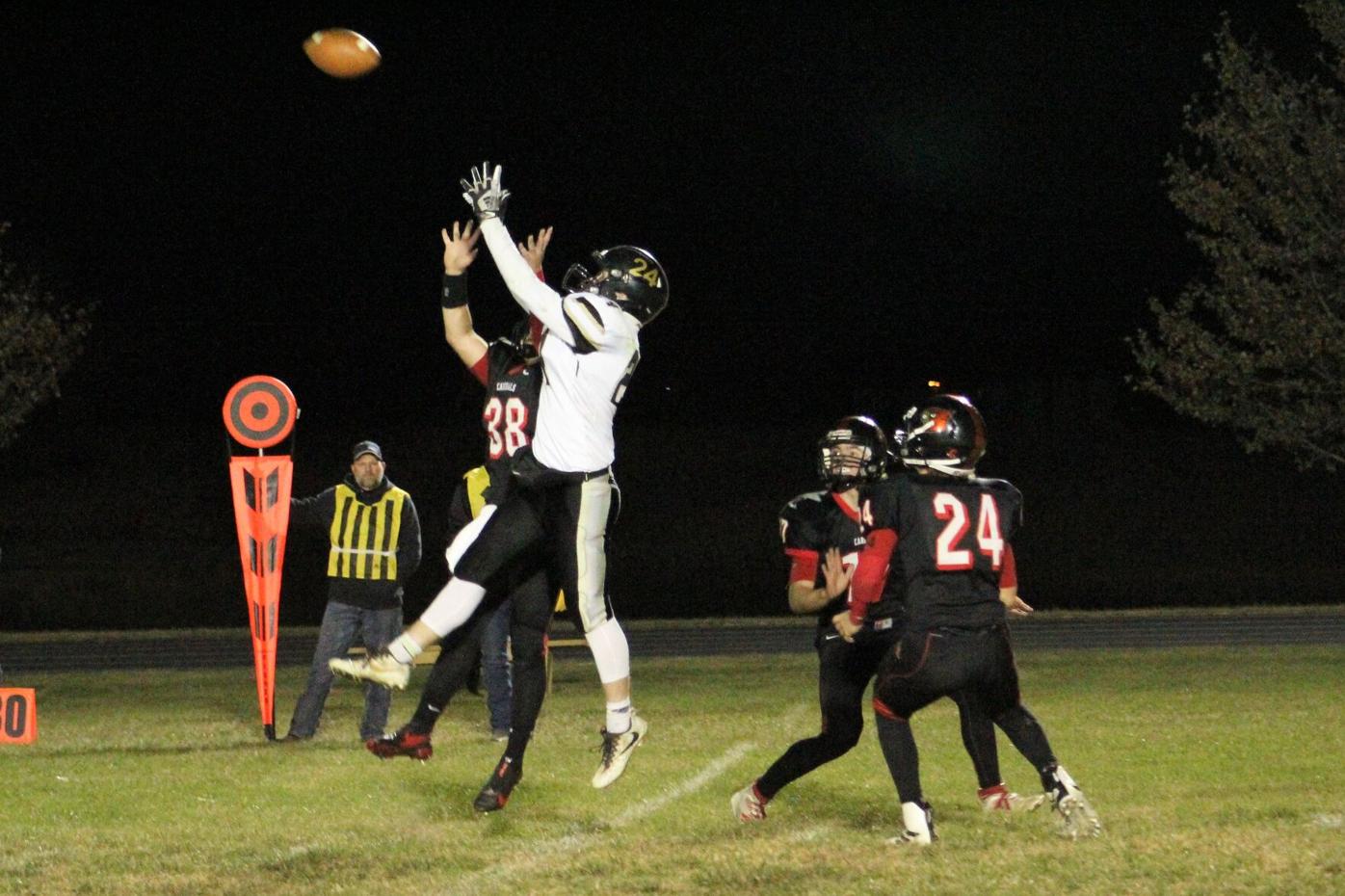 Worth County's Jackson Runde goes up for a pass Friday night at North Andrew.

Worth County's Ayden Gladstone throws a pass to Andrew Alarcon on Friday night against North Andrew in Rosendale.

Worth County's Jackson Runde goes up for a pass Friday night at North Andrew.

ROSENADALE, Mo. – The Worth County Tigers went into halftime tied with the number one team in the state. In the end, the North Andrew Cardinals rushing attack got the best of the Tigers, winning 30-14.

“We probably don’t have as many players that make you go ‘Wow’ but I think we’re a better team,” North Andrew coach Dwayne Williams said. “Our guys don’t bicker, they don’t fight and they don’t do things off the field that other teams have to deal with. I really feel like that team thing is what has carried us through all of this — the ups and downs.”

The Tigers have struggled on the defensive side of the ball for two years, and it was the defense that propelled them to two-straight appearances in the state title game. For the first quarter and a half, it was the defenses that controlled the game.

The Cardinals forced a three-and-out on Worth County’s first drive. North Andrew went straight to the running game on its opening drive, carrying the ball five times for 18 yards. On the sixth play of the drive, Cardinals’ quarterback Carson Thomas was intercepted by Jackson Runde.

“He did well after just a week of practice with no live stuff before the No. 1 team in the state,” Worth County head coach Chris Healy said. “He made a lot of good plays tonight and there were times when you could tell that is was week one for him. But overall, it was nice to get him on the field and his leadership alone adds another dimension.”

The defenses continued to be the dominant force in the game as each team swapped punts after the Tigers’ score. Gladstone was not just a force for Worth County on offense in the first half, but also made his presence felt on the defensive side of the ball — intercepting Thomas on North Andrew’s third drive of the game.

After the interception, the Tigers went straight to their workhorse in running back Andrew Alarcon. Alarcon carried the ball on three of the offense’s first four plays for 15 yards. But the drive ultimately went to the Cardinals’ defense.

Worth County moved the ball down to the two-yard line, but Gladstone and Alarcon were held to zero yards on the next two plays. After a Worth County timeout, Gladstone rolled right and threw a ball that landed incomplete — turning the ball over on downs.

“First and goal on the one-foot line and we couldn’t put it in, that’s tough because that could have put us up two scores,” Healy said. “You never know what happens after that. But I think a lot of that comes when you have a new guy up front and a new guy under center with just a week of practice. We weren’t completely confident going under center, but we might not have gotten a look that hopefully we’ll be able to do next week or in the future.”

The Cardinals’ offense took advantage of the defenses’ big stop and found a way to get through a Worth County defense that had held them in check up that point. North Andrew ran the ball four times for 11 yards on its first four plays, then Thomas came up with the team’s longest play to that points, a 54-yard run down to the Worth County 10-yard line.

Sophomore running back Hayden Ecker’s name was called on the next two plays, starting with a five-yard run. On the second play, Ecker cut through the Worth County defense for a five-yard touchdown run to cut the lead to two with 4:14 left in the first half.

After almost two quarters of football that bred just one score, the two teams combined for three touchdowns over the final four minutes of the half.

Alarcon began the Worth County drive with a 15-yard run that ended with additional yardage due to a personal foul penalty. Gladstone kept things moving with a nine-yard run, then two more runs from Alarcon got the offense down to the North Andrew 15-yard line.

Gladstone connected with freshman Grant McIntyre on a 12-yard touchdown pass to that gave the Tigers a 14-6 lead with 1:44 left in the half. The momentum was stolen for just a short period of time, as Eckler took the ball 51 yards on the Cardinals’ second play from scrimmage to tie the game at 14 right before halftime.

The third quarter was once again dominated by the two defenses. The Cardinals and Tigers traded turnovers on down in their first two possession.

“I think we’re making our fits a little better and doing our job because once you start as a whole, you start playing a lot better,” Healy said. “I think we had a good scheme going into tonight, Coach Adwell did, and I thought the guys executed it well. I just think they were able to come up with a few big plays to score those four touchdowns.”

North Andrew’s second drive of the half was a drive filled with what the Cardinals do best. Three different runners carried the ball on the first three plays, combining for 25 yards. The Cardinals almost replicated that production on the next four plays, gaining 19 yards off those four carries. Ecker finished the drive with a four-yard touchdown run, giving the Cardinals their first lead of the night.

North Andrew answered the touchdown with a defensive drive that led to a Worth County punt. The Cardinals once again drove the ball down inside the Tigers’ five-yard line. This time the Tigers caught a break, forcing Thomas to fumble at the one-yard line and recovered the ball for a touchback.

Worth County just couldn’t find a rhythm offensively in the second half and the muffed pitch on the first play of the drive that ended in a 12-yard loss was symbolic of its offensive woes in the third and fourth quarters.

Alarcon gained most of that yardage back on second down with a 10-yard run. Gladstone’s third-down pass then fell incomplete, leaving Healy with the decision of punting the ball back to the Cardinals, or attempting a fourth and 12.

Healy decided to punt, knowing that he still had around four minutes and three timeouts. But two plays into the drive, Ecker scored from 21-yards out to give the Cardinals the 30-14 score that would be the final score.

“I think we ran that third-down play and if he would have kept going, I think we would have had fourth down and under 10, but I think he turned around and went the other way and it was fourth and 12,” Healy said. “We had three timeouts left, four minutes left and I think that’s plenty of time in 8-man if you can get a stop. I’d like to think our defense was playing well and we could get that stop, but we just didn’t get it done.”

The Cardinals will finish their regular season schedule at home against Schuyler County next week. The win over Worth County gave North Andrew the outright conference championship, becoming the first team to win multiple GRC championships.

North Andrew ran the ball 51 times for 351 yards. Thomas led the team with 163 yards, just ahead of Ecker who finished with 155 yards.

Gladstone completed nine of his 16 passes for 144 yards in his first game. Runde led the Tigers with six receptions for 103 yards. Alarcon carried the ball 16 times for 62 of Worth County’s 96 rushing yards.

“I do like to brag on my assistant coaches because they do such a fantastic job of teaching our guys the plan each week,” Williams said. “We may do it a little bit different than everybody else because we have all three coaches putting the offensive and defensive plans together.

"All three of us meet, watch film and do the job. They’re responsible as much as I am for implementing the plan that we put together each week and they do such a fantastic job of teaching the plan. Last week we got away from that, our players did, but this week we stuck to the plan and you see the results.”

The road doesn’t get any easier for Worth County next week as they travel to Stanberry for their regular season finale. The Bulldogs are 6-1 win this season and coming off a 20-18 win over East Atchison.

“Coming into the year we expected to compete against teams like North Andrew and Stanberry,” Healy said. “In the GRC, every week is going to be a tough matchup and we expected to be up with that group and hopefully we can get there over these next few weeks.”