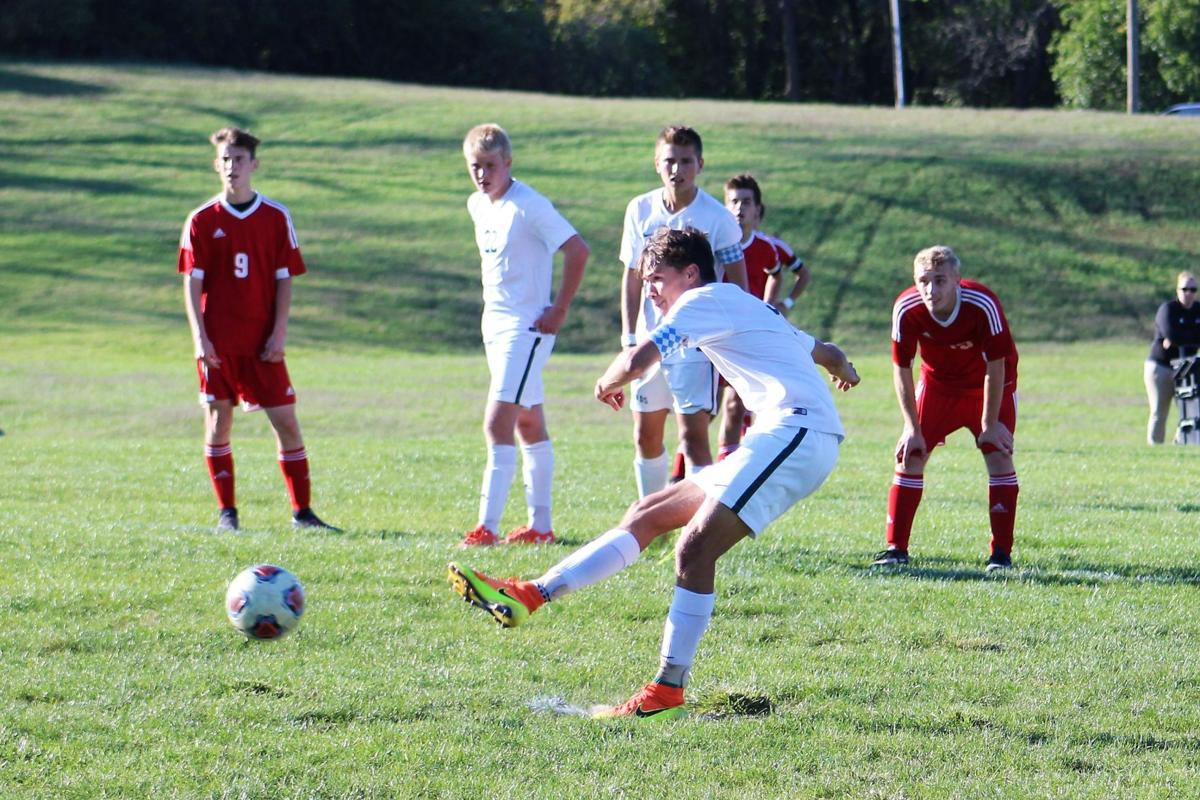 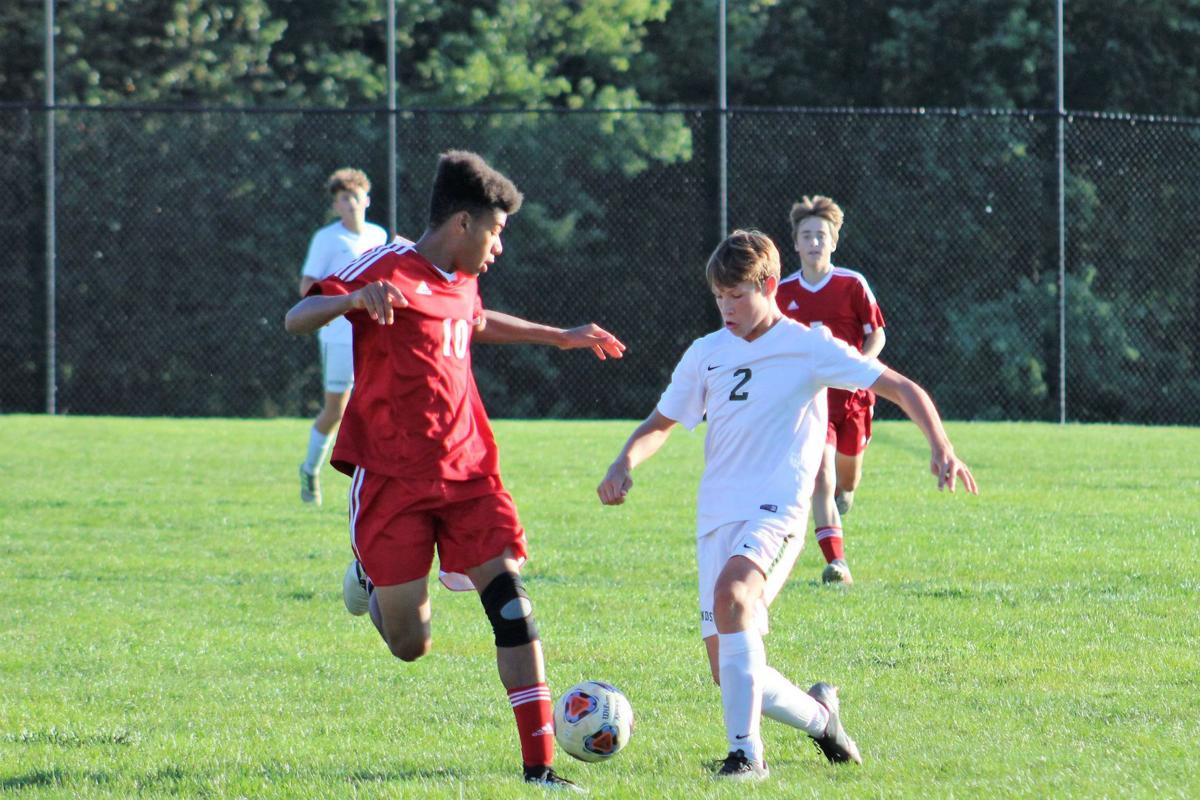 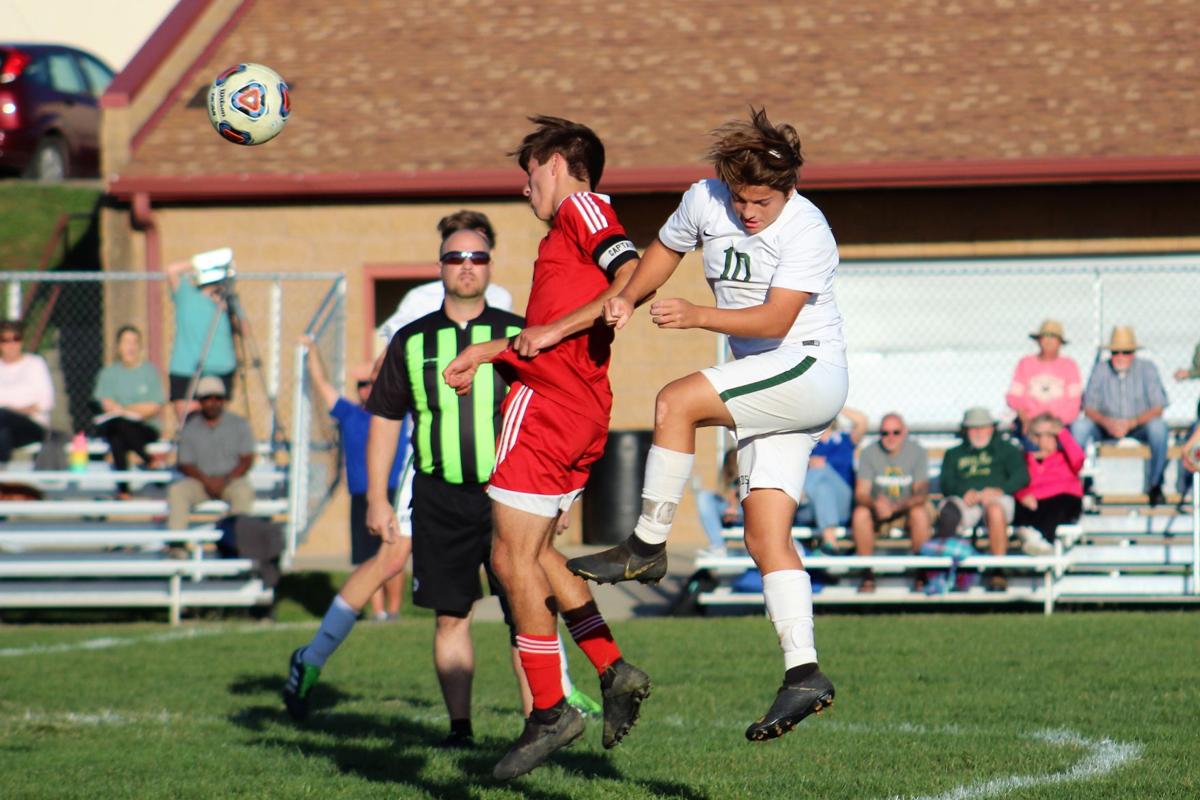 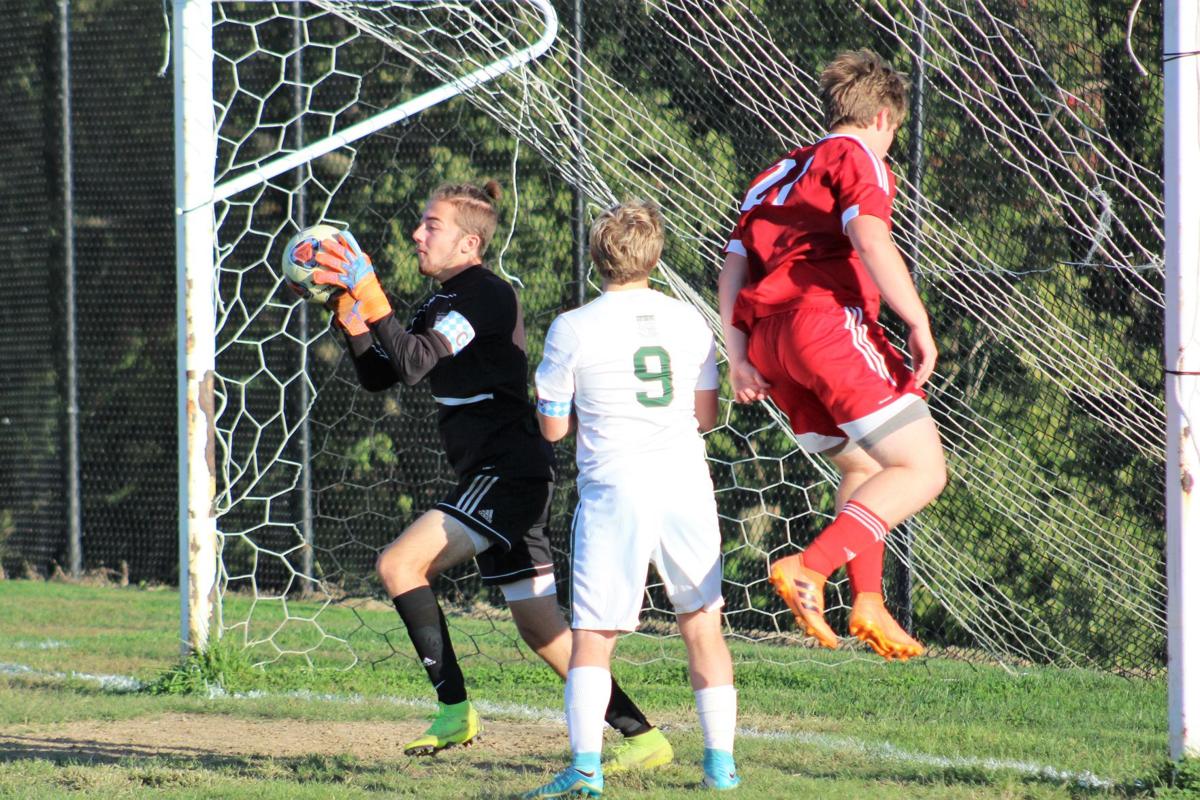 Maryville's Hunter Johnson makes a save in the second half Tuesday evening at Spring Garden Middle School.

Maryville's Hunter Johnson makes a save in the second half Tuesday evening at Spring Garden Middle School.

ST. JOSEPH, Mo. – It wasn’t long ago that the Maryville Spoofhounds looked like a bad soccer team. The Spoofhounds had lost four in a row and five of six. The team was outscored 26-5 in those six matches. But with their 2-1 win over the Benton Cardinals Tuesday night at Spring Garden Middle School, Maryville pushed their winning streak to four and have allowed just five goals over that stretch.

“The thing is that I knew that they had it in them and it was just trying to extract that and we talked several different times during those games about them just believing in themselves,” Maryville coach Dale Reuter said. “What we did was we just simplified everything, we simplified the whole concept of practice and everything it is. Since that time—we’re 4-0.”

The Spoofhounds had revenge on their minds after losing 4-0 to the Cardinals on Sept. 10.

“They beat us 4-0 and so it felt great to down here and beat them,” Forward James DiStefano said.

Maryville struggled early to get things going on offense against a Benton defense that had allowed just five goals over their last six matches.

“Their goalkeeper was really good, he was getting everything,” DiStefano said. “We had like 12 crosses and he got like every one of them. They just played good defense today and we had a few good goals.”

The offense found some life late in the first half off the foot of forward Jacob Ferris. Ferris broke free down the right side and finished off the play by placing the ball in the top left-hand corner of the net to give the Spoofhounds a 1-0 lead in the 32nd minute.

Maryville worked the ball back down the field a few minutes later that ended with a corner opportunity. The corner itself was unsuccessful, but DiStefano found the net off the rebound to make it 2-0 in favor of the Spoofhounds in the 34th minute.

As the half came to an end, Maryville was given the chance to stretch their lead to three with a penalty kick. Jaden Hayes took the kick but came up empty handed after a save from the Benton goalie.

The defensive battle continued in the second half as neither team could find an offensive rhythm early on. The Spoofhounds had their opportunities, but it was the Cardinals who took the momentum midway through the second half.

Benton’s lone goal came in the 60th minute of the match. Goalkeeper Hunter Johnson made a save on the first attempt, but the Cardinals found the back of the net off the rebound. Johnson was key in holding Benton to one goal, finishing the match with 11 saves.

“He made three very nice saves after struggling a bit in the first half,” Reuter said. “I told him that he was playing way too chill for me right now and you’re going to have to play with a sense of urgency and go at it a little bit. He agreed and he stepped it up in that second half.”

The Benton keeper continued making it hard on the Spoofhound offense in the second half. Ferris had an open shot in the 65th minute but another save kept it a one-score match. Forward Justin Staples had his opportunity a few minutes later, but missed high on the shot.

The Cardinals controlled the ball and held the momentum over the final 20 minutes of the match. Johnson and the Spoofhound defense bent at times, but never broke.

“Those last 20 minutes were pretty intense because it’s conference, but I was glad to get the W because we lost to them at home—so we had to get the win here,” Johnson said.

Benton’s final opportunity came in the closing seconds as they were awarded a free kick just outside the goalkeeper’s box. The Cardinals’ shot missed high and Maryville kept them at bay over the final seconds of the match. Johnson said he thrives off of the pressure of a close match.

“I think it makes me play better because I don’t want to let my teammates down,” Johnson said. “It’s the worst feeling for me when we have the lead and I let a goal in. It’s really good motivation knowing that we’re not up by much because it makes you play better.”

The win was the seventh of the season for Maryville who will look to add a few more wins this weekend in the K.C. Showcase.

“It’s the right time of the year, that puts us at 4-1 in the conference and now we got to a tournament in KC and so play some different teams so we get a little bit of a break there,” Reuter said.

The Spoofhounds will face Frontier STEM on Friday and then face St. Paul Lutheran on Saturday. Maryville then comes home to face Guadalupe Centers Charter on Oct. 15 before finishing with four conference games to end the regular season.

“We’re doing well, we’ve played pretty well in our last four performances and you can tell we’ve grown just by watching us,” Johnson said. “We’re passing a lot better, playing as a team and the new formation has helped a lot.”