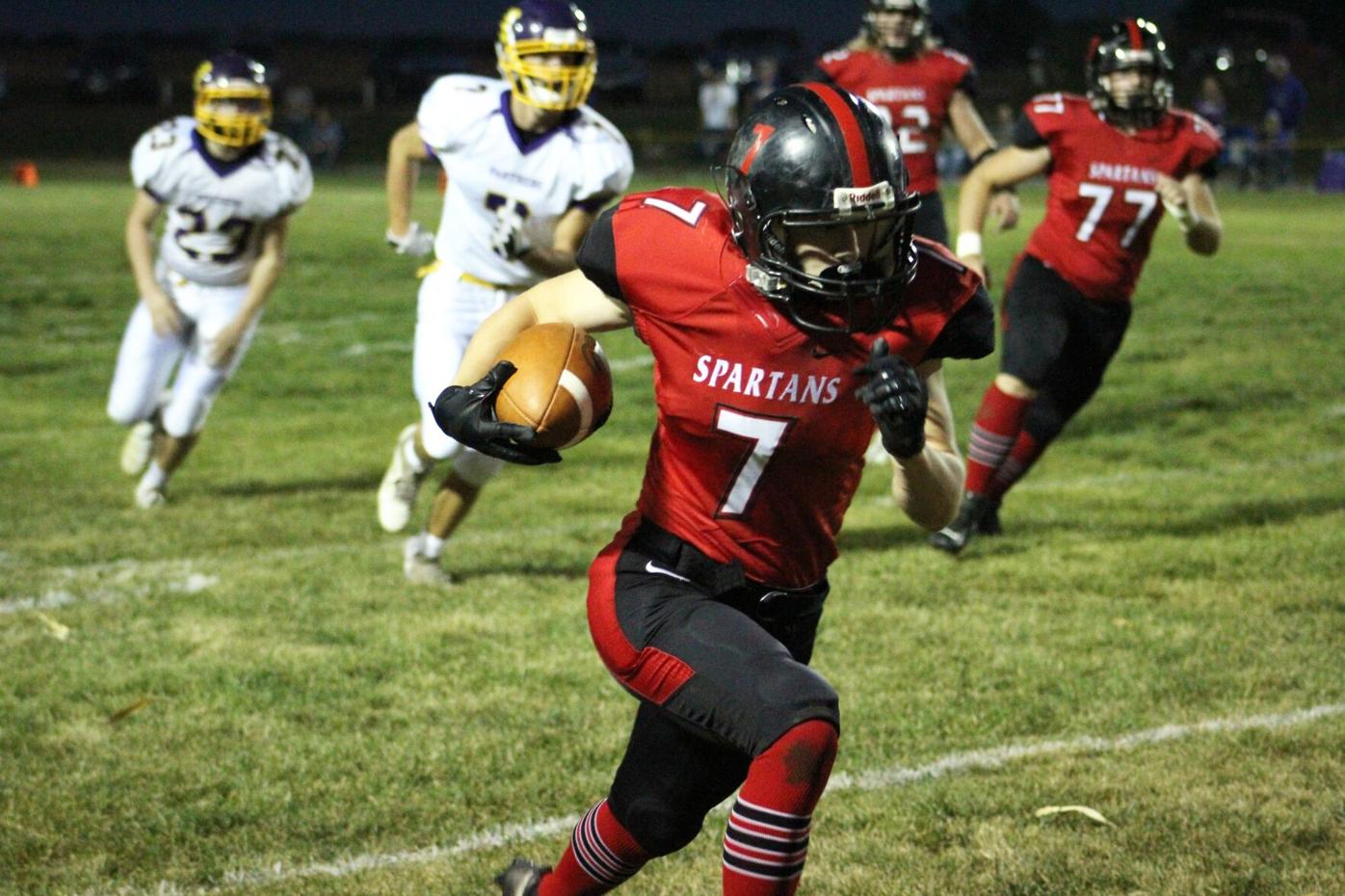 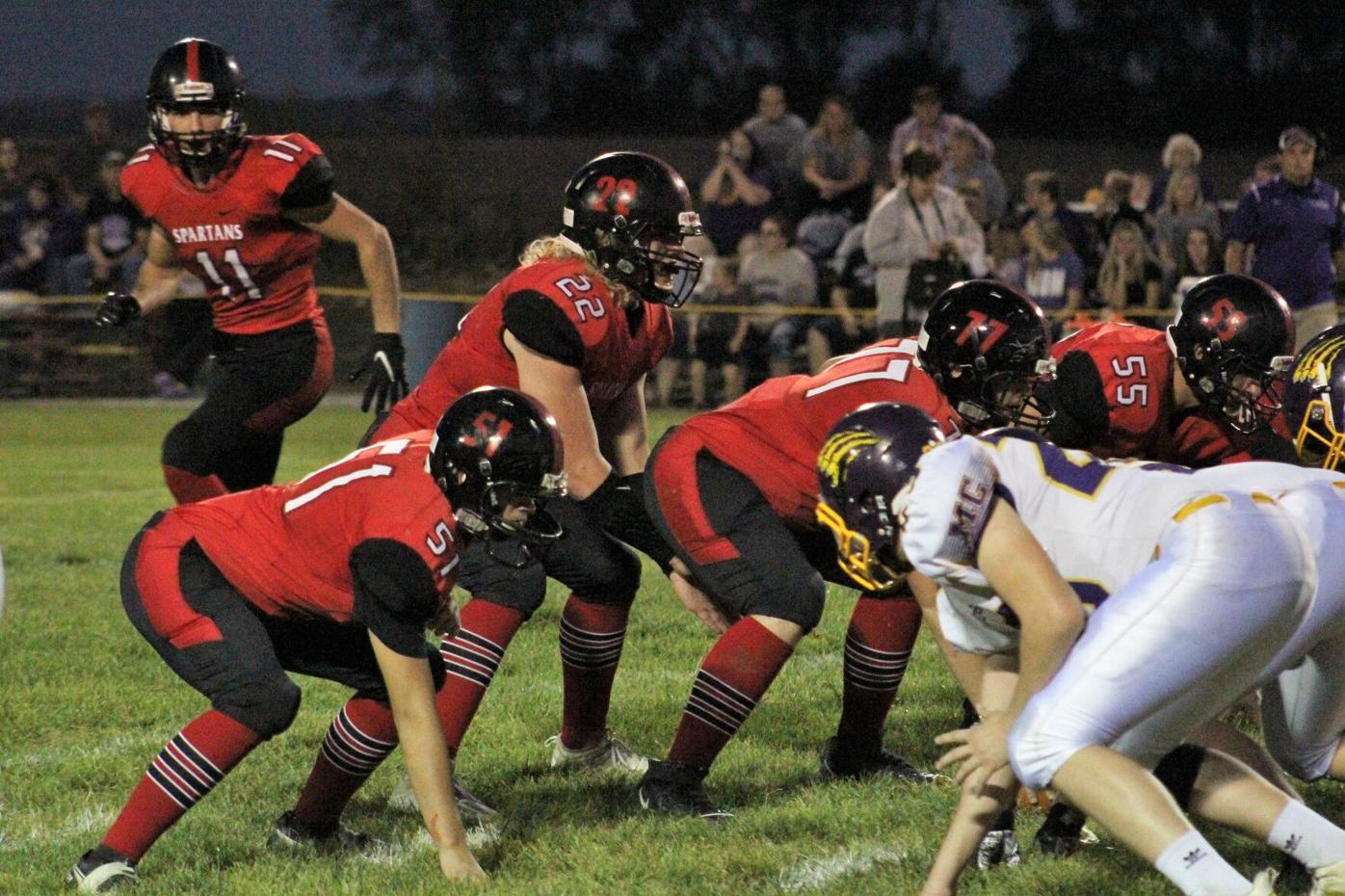 The South Holt/Nodaway-Holt offense gets ready to run a play Friday night in Graham against Mound City. 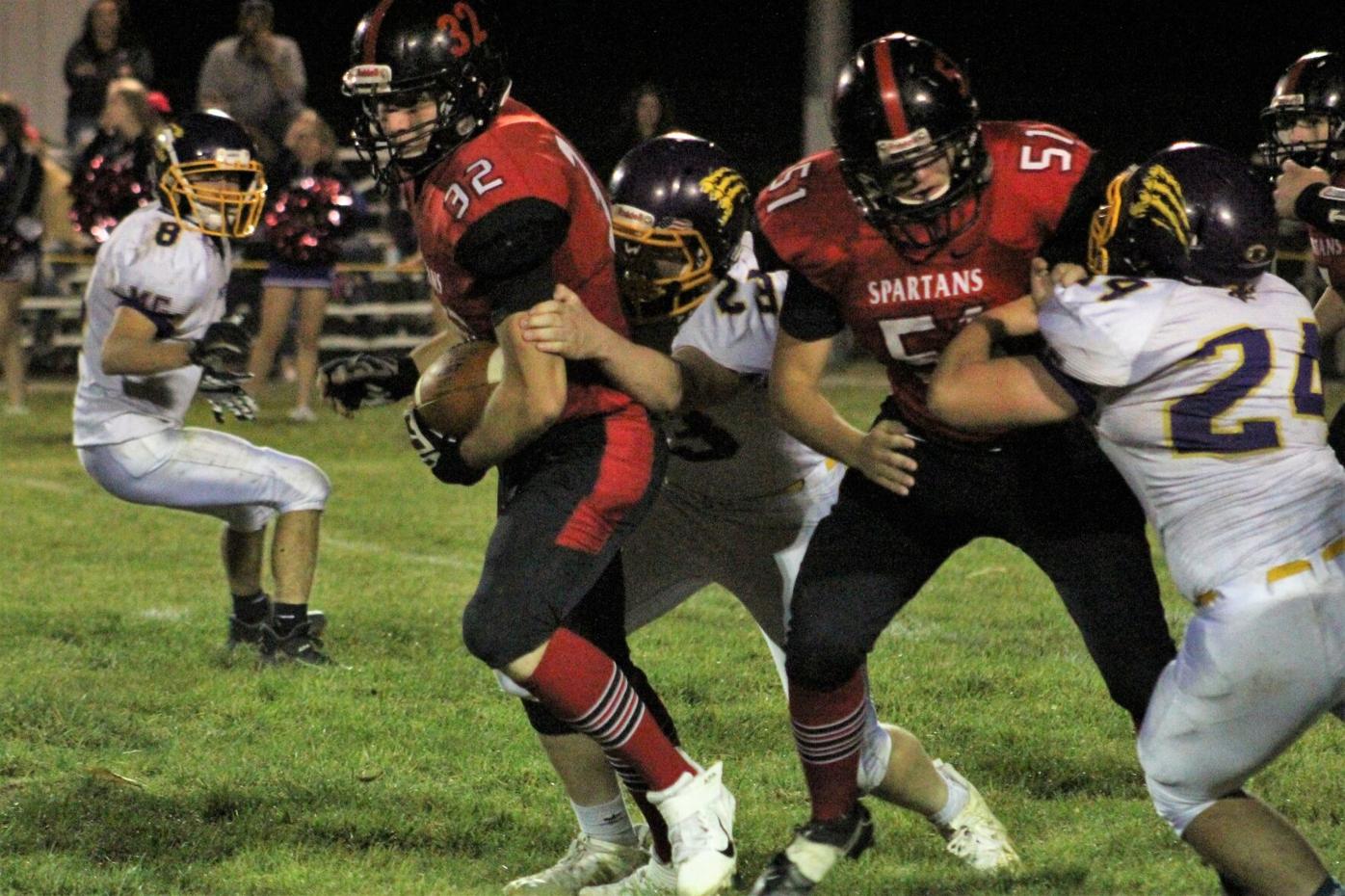 The South Holt/Nodaway-Holt offense gets ready to run a play Friday night in Graham against Mound City.

GRAHAM, Mo. – The South Holt/Nodaway-Holt Spartans rushed for 423 yards in a 69-24 win over the Mound City Panthers. The 69 points was the most allowed by the Panthers since their 76-74 loss to Stanberry in 2013.

The win ended a three-gaming losing streak to the Panthers for the Spartans.

“As big as the rivalry game is for us, we had to treat it like any other game preparing for them,” Spartan quarterback Drew Quinlin said. “That was really tough this week, but to come in and beat them after three years of being embarrassed by them felt really good.”

The Spartans rushing attack got going early with a 45-yard touchdown run from Alex Harris on the second play of the game. The SHNH defense then took its turn at making a play on Mound City’s opening drive, forcing senior quarterback Conner Derr to fumble.

The Spartans then used a trio of rushers to find the end zone once again. Houston Coleman began the drive with an 11-yard run, then Brody Scroggins added five yards and finally Gannon Phelan scored with an 11-yard touchdown run.

“We have three running backs that can all run the ball really well,” Scroggins said.

The Panthers had little offensive success on their first eight plays, gaining just one first down via penalty. Mound City then struck gold as Derr connected with receiver Gage Salsbury on a crossing route for a 58-yard touchdown.

The Panthers caught the Spartans off guard early on, running an offense that SHNH hadn’t prepared for.

“We anticipated that they would run their basic stuff and so that’s what we repped all week,” Spartans coach Josh Petersen said. “Both defensive coaches had an inkling that they might come out and do something screwy and it worked for about the first quarter, quarter and half.”

The offenses continued to trade blows over the next 12 minutes of game time. Quinlin answered Derr’s touchdown pass with a three-yard touchdown run, then Derr responded with another touchdown pass of 29 yards.

“For the first time, they ran a four-wide set,” Quinlin said. “I’ve never seen that in the history of Mound City, ever. So we weren’t prepared as no team would be in that situation. We let a couple slip early, but the final score says it all. The second half was a whole different ball game.”

Mound City took momentum for the first time in the first half with a stop from its defense. The Spartans turned the ball over on downs after a dropped pass in the end zone. Derr didn’t waste that opportunity as he cut the lead to two with 10:59 left in the half with a 15-yard touchdown run.

SHNH got back to basics on its next drive, going 40 yards on eight plays. Fullback Brody Scroggins played a key role, carrying the ball four times for 27 yards. Quinlin ended the drive with a five-yard touchdown run to give the Spartans a 26-18 lead with 6:33 left in the half.

Quinlin’s touchdown was the beginning of a 14-second period in which the two teams combined for three touchdowns. Mound City took all of one play to respond as Derr connected with Salsbury for the second time in the half with a 61-yard touchdown.

The Panthers’ last gasp came on its opening drive of the second half. Mound City had a chance to cut the lead to one score, but the Spartans’ defense forced a three-and-out. Scroggins opened the drive with a 34-yard run and Quinlin scored once again with a 13-yard touchdown run.

The Spartans forced another three-and-out, starting the race to 45. Scroggins and Harris combined for 11 yards on the first two plays. On the offense’s third play, Phelan took the pitch 47 yards for a touchdown, only for it to be negated by a penalty.

SHNH overcame 25 yards in penalties on the drive, mostly due to Scroggins, the guard turned fullback. Scroggins carried the ball five times for 51 yards, including an eight-yard touchdown run with 1:53 left in the third to give the Spartans a 54-24 lead.

“We can just give it to Brody and let him eat,” Petersen said. “I think he was full after last week, I think he’s full after tonight and I think he’ll come back hungry next Friday.”

Scroggins believes he only gets stronger as the game moves along.

“In the first half I felt kind of slow, didn’t really do much but in the second half I came out and made some big plays.” Scroggins said.

The Spartans’ defense continued their strong second half with a safety on Mound City’s next drive. Defensive tackle James Herr made the tackle that led to the two points on a night where he also recorded a sack and forced a fumble.

Scroggins’ big night on the offensive end continued with a 28-yard touchdown to make it 62-24. Mound City’s next drive came to a close on a fourth down sack by senior Tristan Steinart. The Spartans then ended the game as Quinlin connected with Dylan Schuetz for a 36-yard touchdown.

SHNH carried the ball 44 times in the game. Scroggins led the Spartans with 197 of their 423 yards, while Coleman finished with 44, Phelan with 76, Harris with 73 and Quinlin with 36. Quinlin led the team with five total touchdowns, four of which came on the ground.

“He’s just doing Drew things, that’s really the only thing I can say about him this year,” Petersen said. “Drew is going to do Drew things, he’s Superman, I’ll give him that nickname and if people are mad about it, they can try and stop him.”

Derr finished eight of 16 for 190 yards and three touchdowns through the air. The senior was also the team’s leading rusher, carrying the ball 12 times for 63 yards and a touchdown.

Mound City travel to face winless DeKalb next week and try to end its first losing streak since 2017. The Spartans schedule is unknown as Rock Port has already cancelled next week’s game due to COVID-19.

“We knew going into this that if we beat them, we were in for a conference championship hunt and we knew that North Andrew and Albany were playing tonight and it would be a good game,” Petersen said. “We can only control what we can control, but we have to win and we have to win convincingly to try and bump us up to a one seed and if not, we’re sitting at two and we’ll get two home games before we play North Andrew for a district championship. But right now our focus is on maybe getting a game next Friday and if we don’t, we’ll continue to rep for North-West Nodaway.”