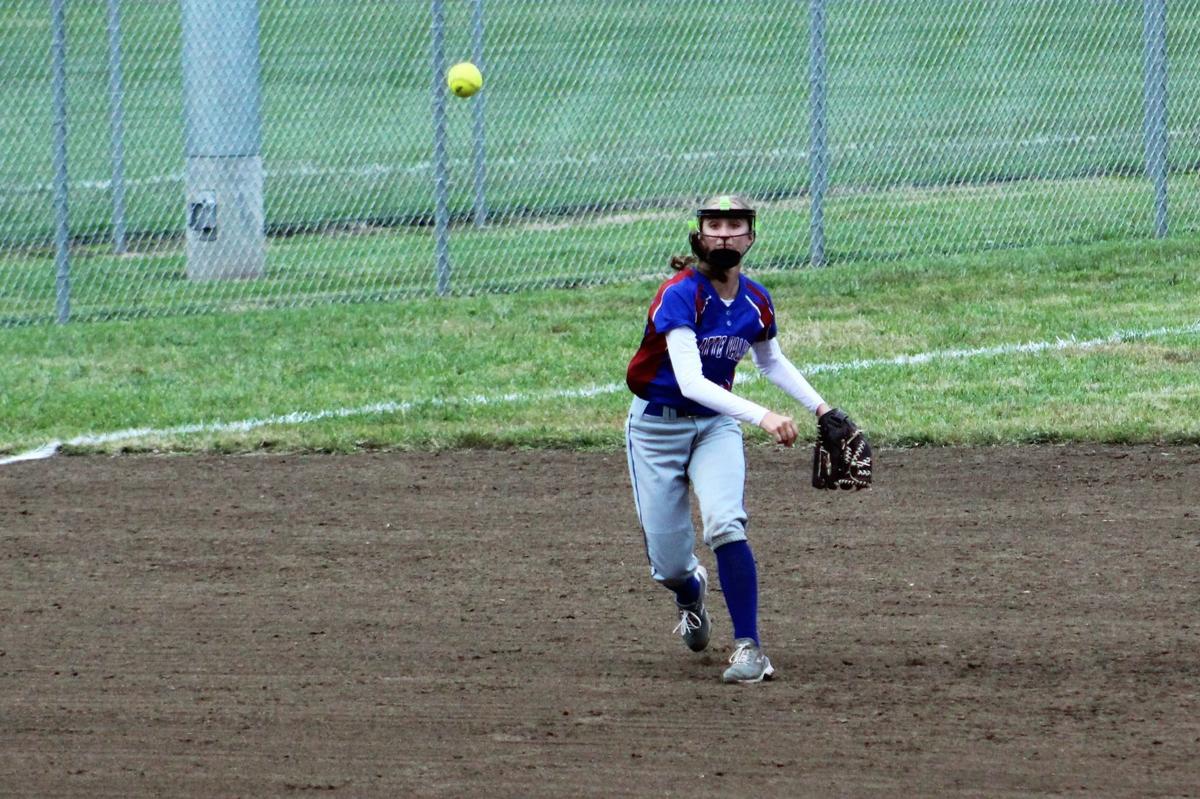 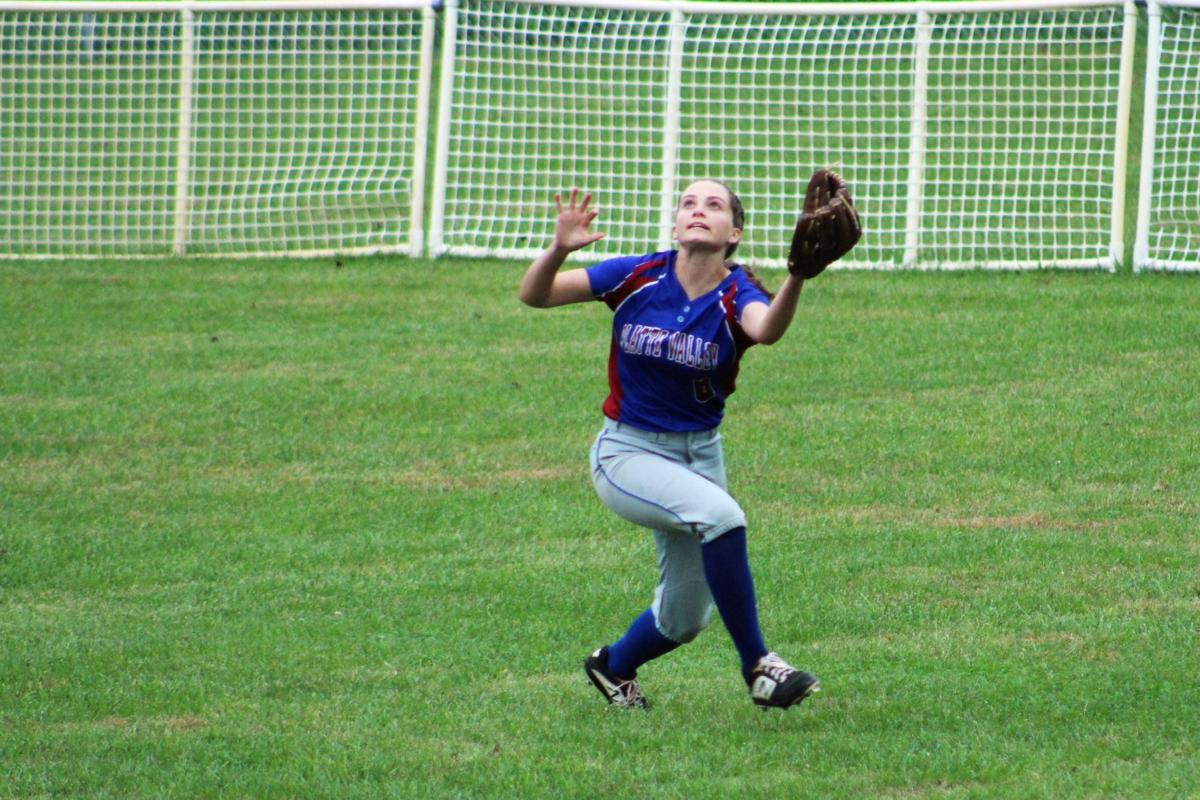 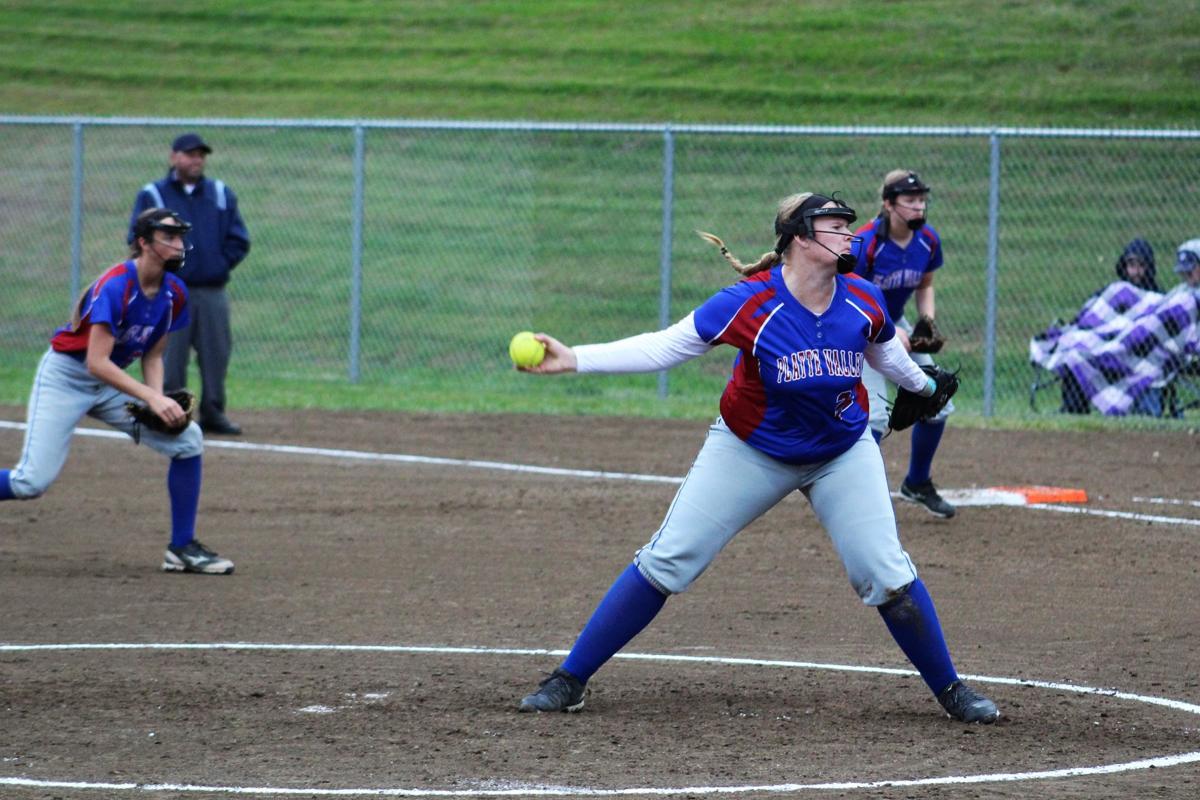 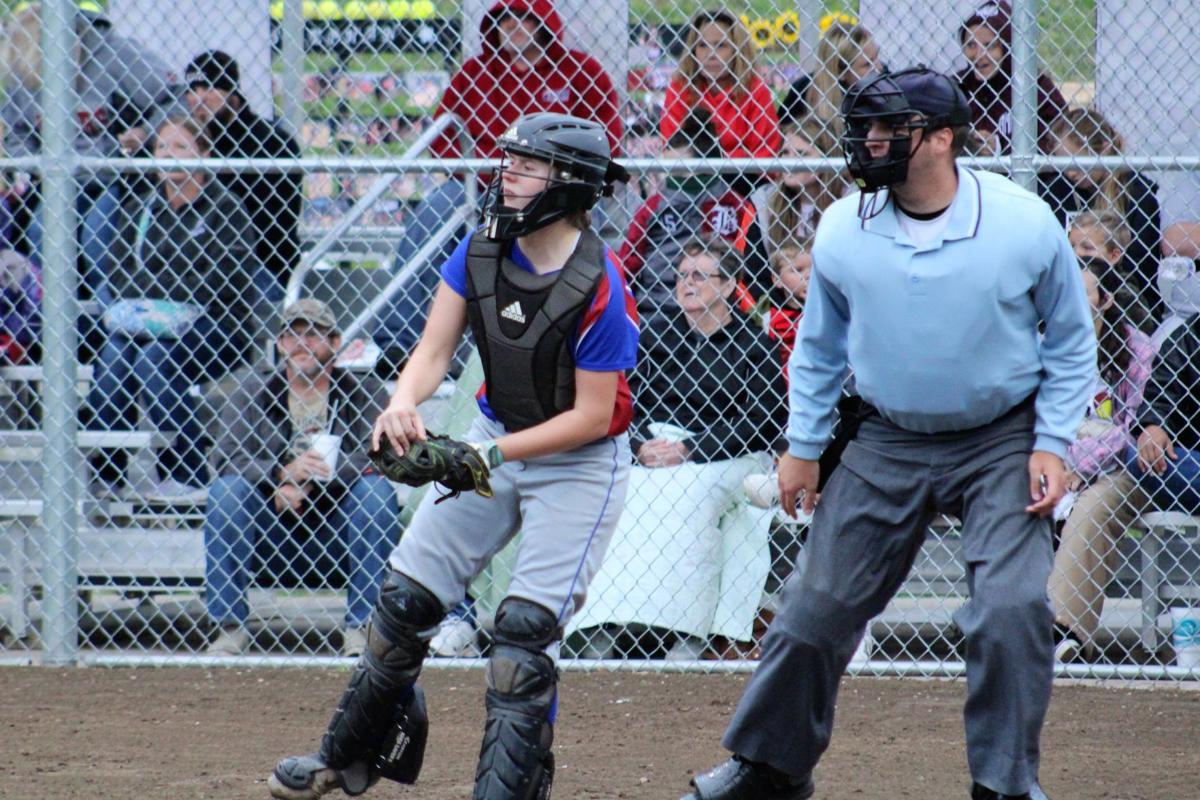 Platte Valley's Kaylin LaMaster throws the ball down to second base Thursday night in St. Joseph. 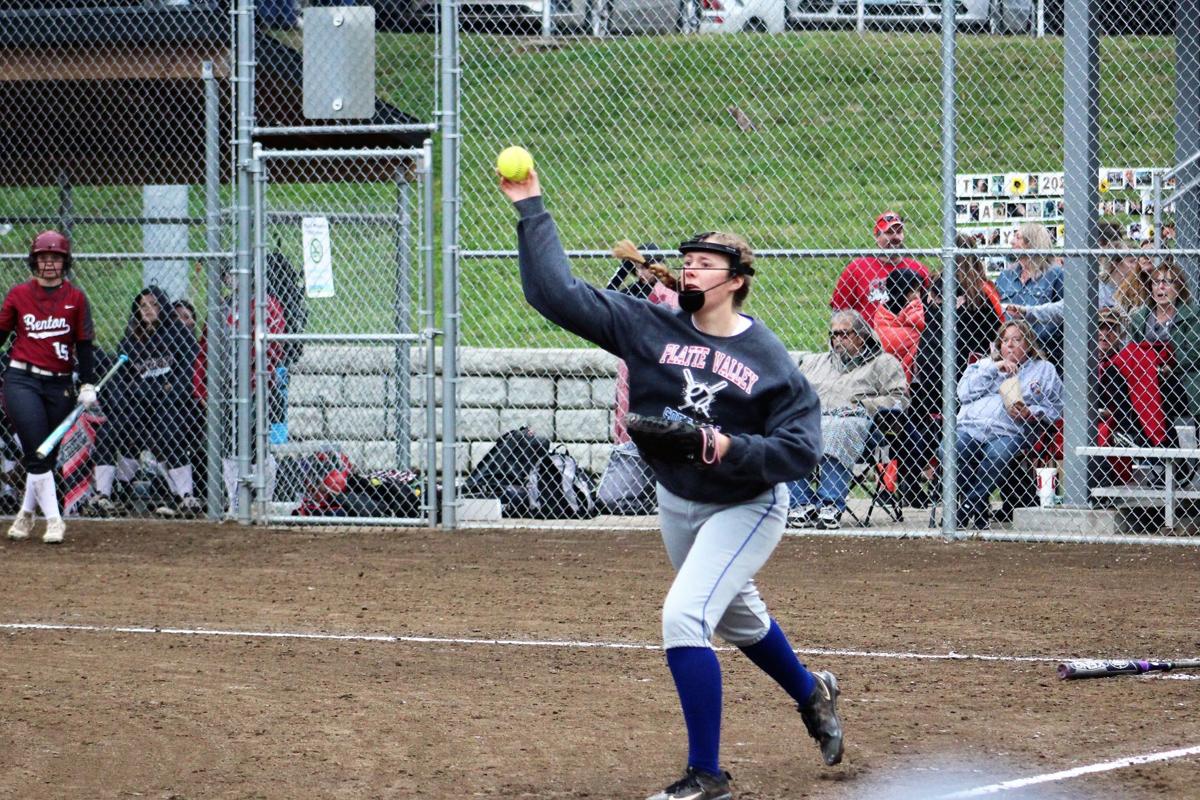 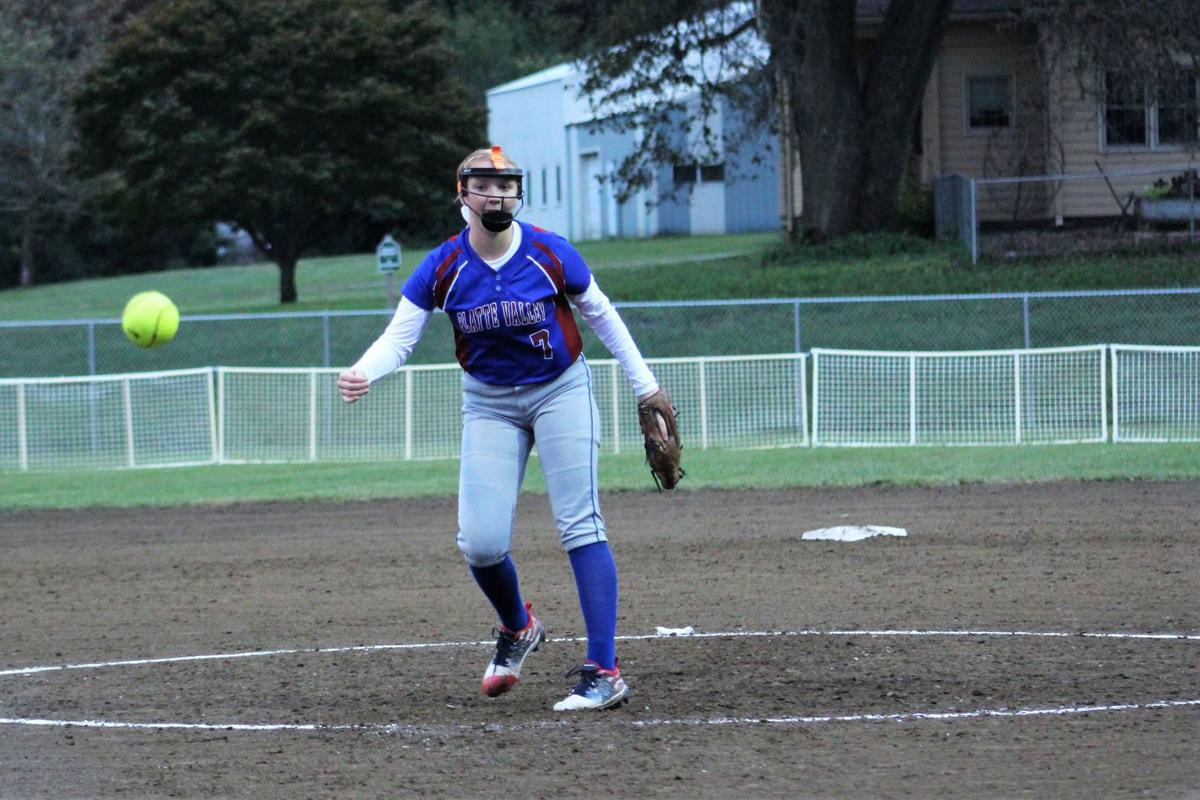 Platte Valley's Kaylin LaMaster throws the ball down to second base Thursday night in St. Joseph.

ST. JOSEPH, Mo. – The temperature dropped 20 degrees in the top of the first inning Thursday night at Hyde Park. The weather may have been cold, but it didn’t take long for the bats to heat up in Platte Valley’s 11-8 win over the Benton Cardinals for their fifth win in their last six games.

“We came down here a few years ago and we got spanked,” Platte Valley coach Shelly Deen said. “I know they’re young, but they battle and that’s what we want to see. I love playing these bigger schools just to get the experience of seeing different pitchers and they can run—we need to see that.”

Malia Collins led off the top of the first with a single to center field. The junior shortstop then stole second and third base. Kaylin LaMaster dropped a bunt that scored Collins and an errant throw to first base allowed LaMaster to reach third.

“It felt good hitting my first career homerun,” Sydnee Deen said. “It was nice to see us hit all of those homeruns.”

The lead last just a short time as the Benton’s first two batters reached with a single and on a dropped fly ball. Sydnee Deen struck out the Cardinals’ number three hitter, but a passed ball allowed Keylee Buxton to reach first base.

Benton cut the lead to two on Bailey Stephan’s groundout. A second error in the inning allowed the Cardinals’ Adleigh Wilkerson to score. The third Platte Valley error tied the game at three. The Valley ended the inning tagging out Andee Magness trying to score on a passed ball.

Platte Valley went down in order in the top of the second. Benton started the bottom half of the frame with a strikeout, but a walk and a single gave the Cardinals runners on first and second. Wynter Hurst didn’t let those baserunners go to waste, hitting the game’s second homerun—giving Benton a 6-3 lead.

The third inning was the only inning in which neither team scored a run. The Platte Valley offense regained its rhythm in the top of the fourth with Jackie Pappert and Blair Stoll reaching base with walks.

Stephanie Turpin loaded the bases with a bunt single with one out. The Valley retook lead with an inside-the-park grand slam from Collins. Collins led Platte Valley with three hits and three stolen bases.

“I was in a little bit of a slump on Tuesday and so it felt good to come out and get some hits,” Collins said. “They made some good defensive plays against us, but it felt good.”

After retiring the first batter in the bottom of the fourth, Jessica Miller came in to relieve Sydnee Deen. The Platte Valley started pitched three and a third, allowing three hits, three earned runs and two strikeouts.

“Like I’ve told them, I love our pitching but we’re not dominant,” Coach Deen said. “We’re not always going to strike them out, so we want to put them in play and once you get baserunners on you’ve still got to perform, and they did that tonight.”

Sydnee Deen began the top of the fifth with a single. Benton retired the next two batters but Pappert gave Platte Valley a three-run lead with a two-run homerun over the left field fence.

“We’ve just got to battle on our end, on the offensive and hit our balls,” Coach Deen said. “We don’t have to hit homeruns but we’ve got to have baserunners and that’s what we did tonight.”

Miller allowed her first run of the game in the bottom of the sixth on a homerun from Magness. Miller then allowed back-to-back walks. The junior pitcher then settled in and struck out the next three batters.

Benton scratched across one more run in the bottom of the seventh to give the game its final score at 11-8. Miller pitched three and two-thirds innings, allowing two runs and striking out five. Deen and Miller together allowed five earned runs on seven hits.

“Their coach told me at the beginning of the game that they are good hitters and they did, they hit them hard,” Coach Deen said. “I told the pitchers that when you miss, they’re going to hit it.”

The Platte Valley offense finished with nine hits and scored double-digit runs for the third time in their last six games.

“We’re not going to give credit to the wind today, I think we finally clicked, we all really gelled tonight and our offense was there for us,” Collins said.

The win over Benton improves the Valley’s record to 13-6 this season and Coach Deen’s team is now 3-1 in their last four games against teams from St. Joseph.

“It really shows our potential and shows how much we’ve developed, and it feels good to get that win going into districts,” Collins said.

Platte Valley will finish the regular season with a trip to South Harrison on Monday before starting districts on Thursday against Albany.

“I told them tonight that they have to dig deep, find it and a week from tonight we’re going to put it all out there,” Coach Deen said.