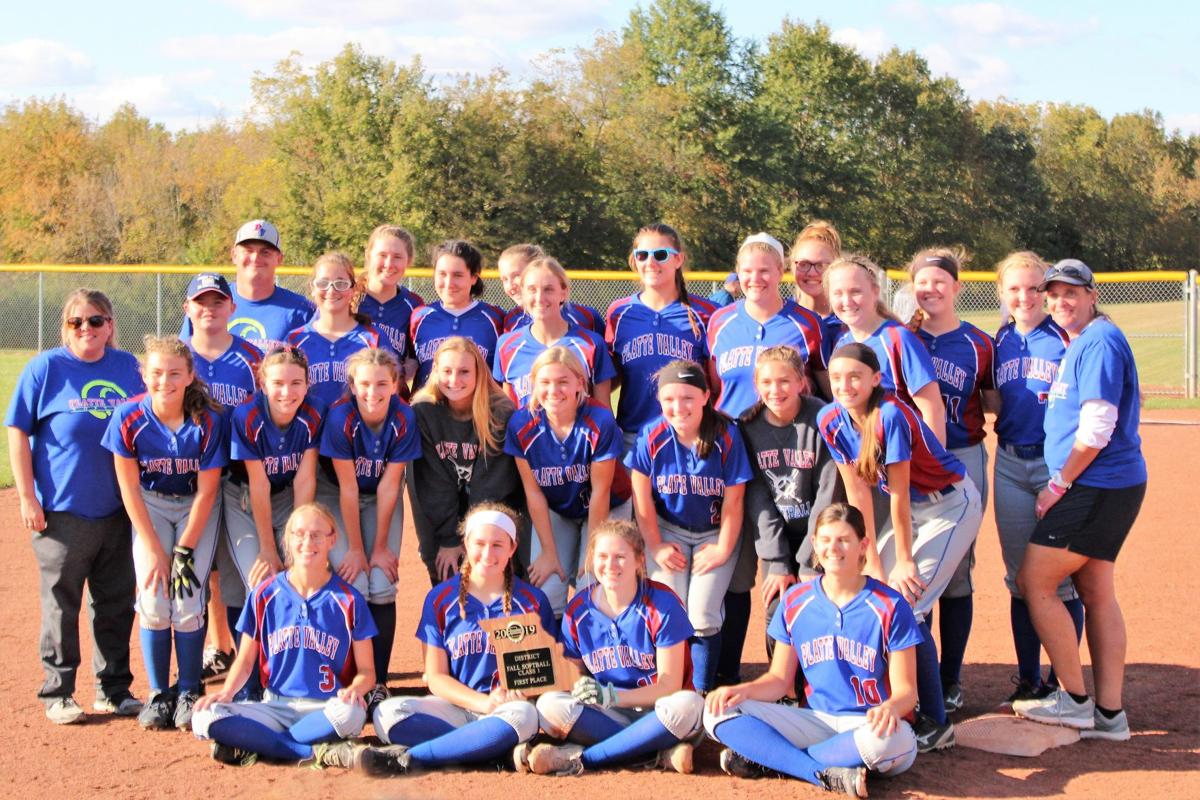 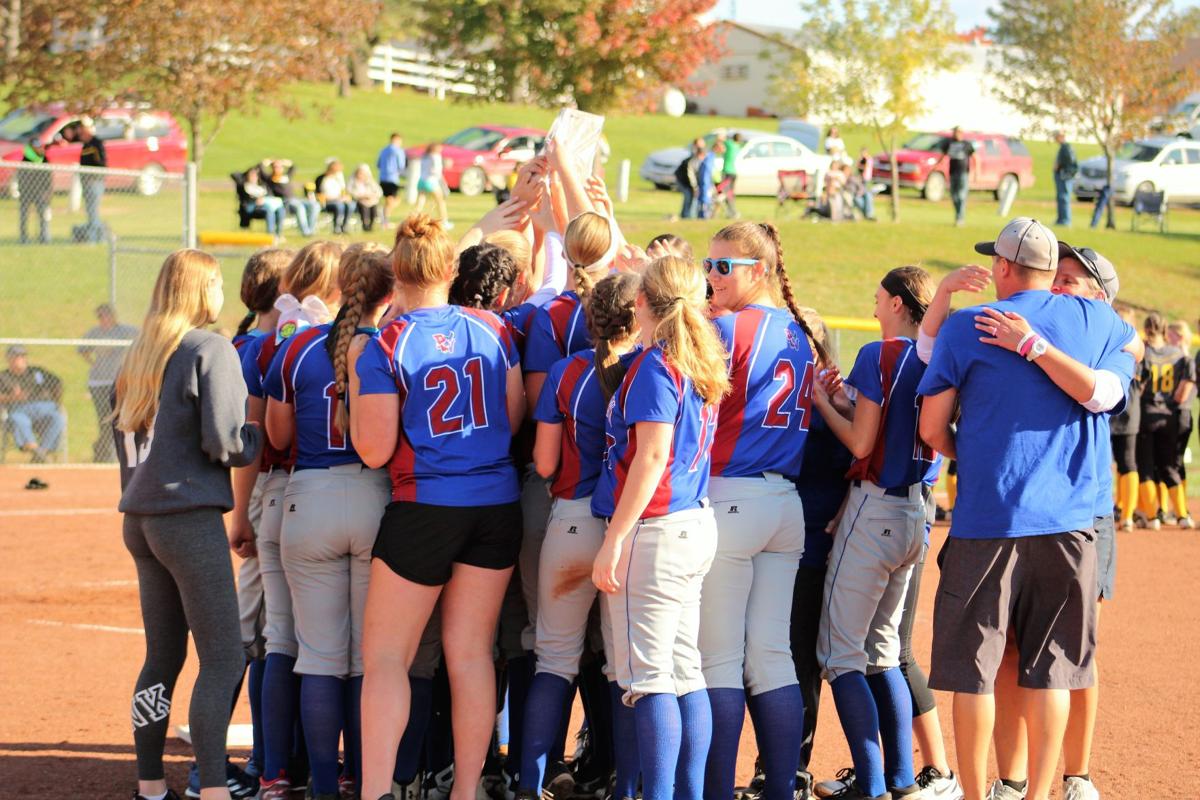 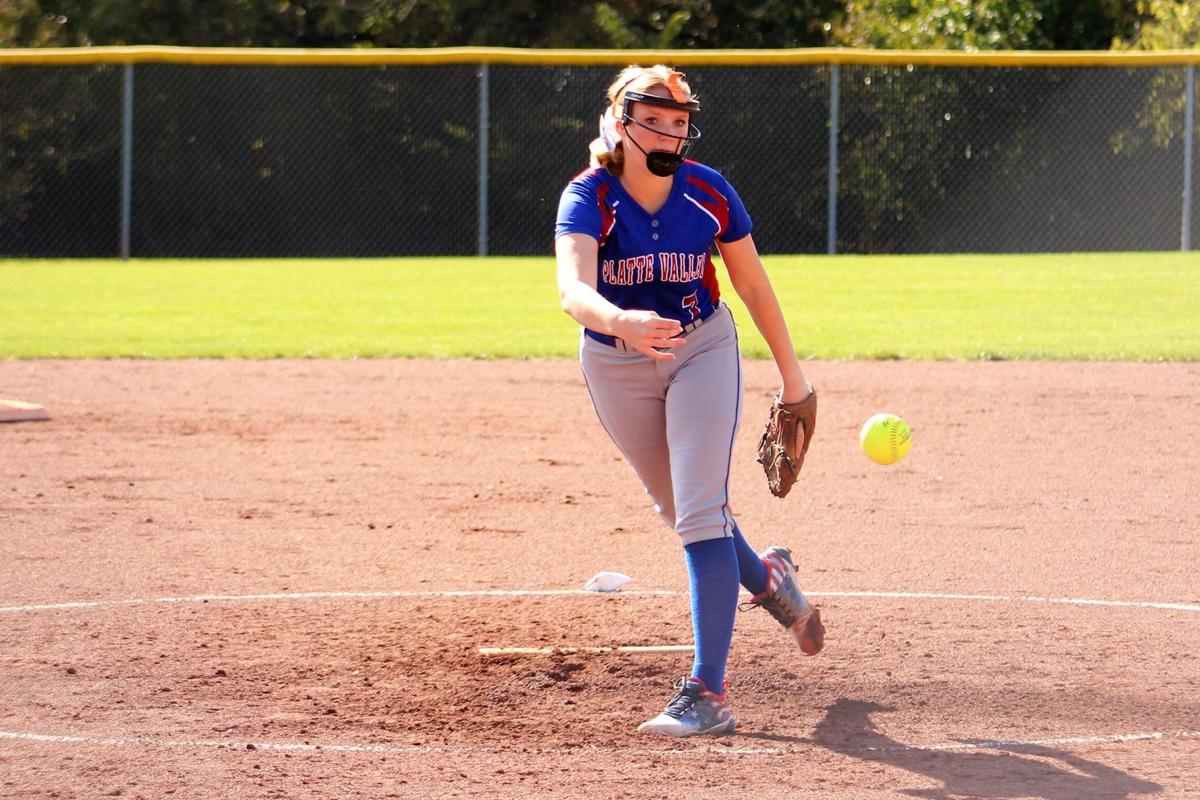 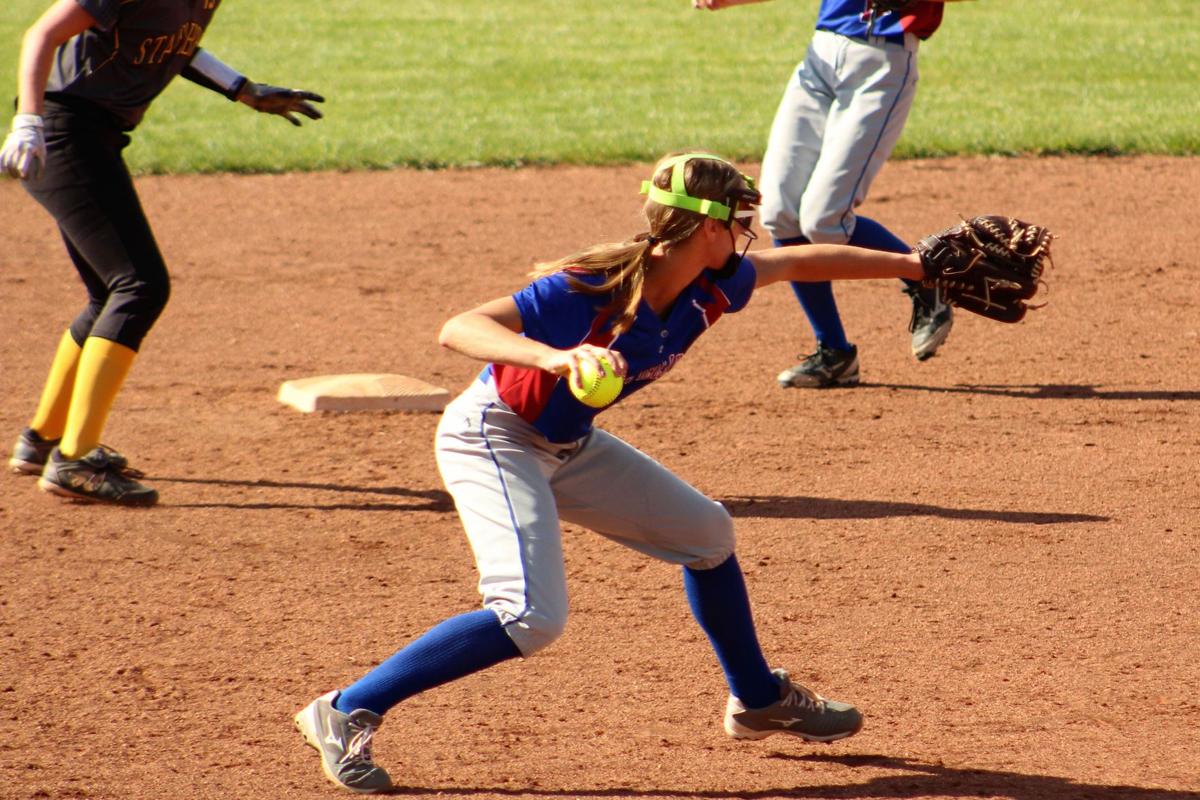 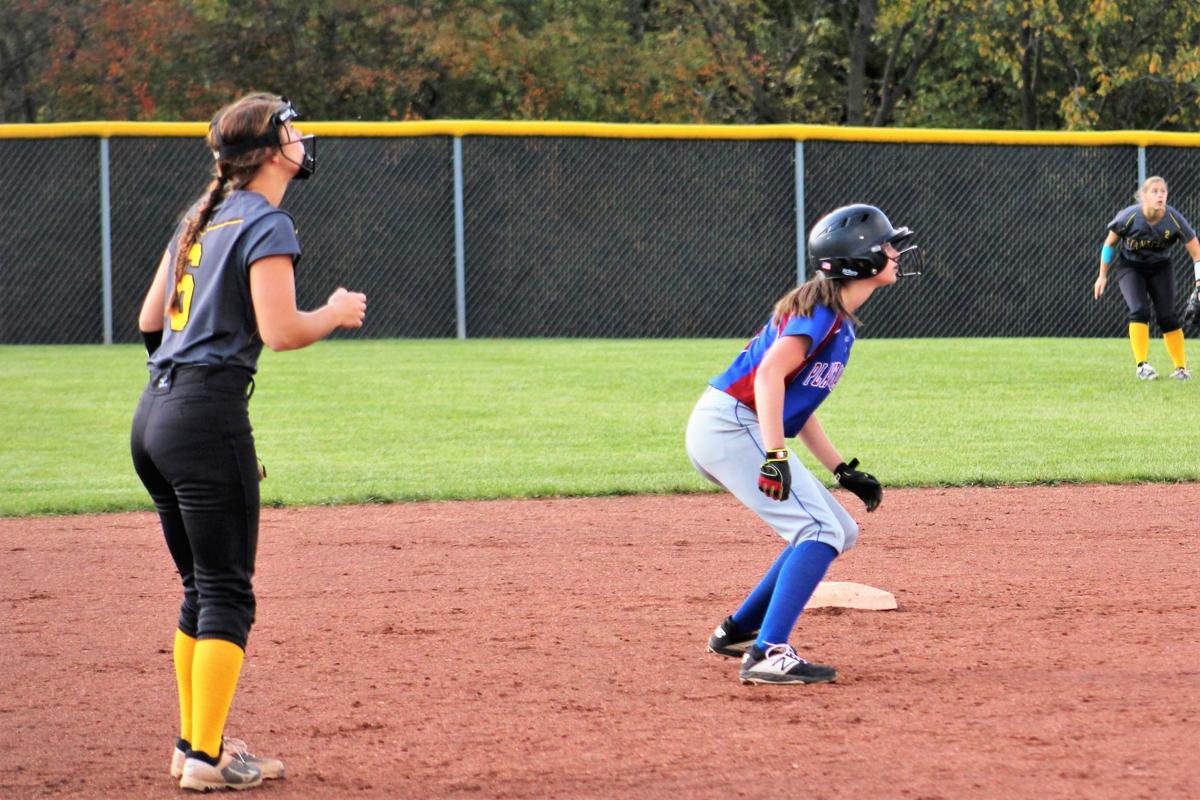 Platte Valley's Stephanie Turpin leads off second base in the third inning Saturday in Stanberry.

Platte Valley's Stephanie Turpin leads off second base in the third inning Saturday in Stanberry.

STANBERRY, Mo. – Hugs were a dime a dozen Saturday afternoon in the Class 1 District 16 Championship. There were also tears, and pictures. Lots and lots of pictures after Platte Valley rallied to win the district championship 8-7 in eight innings over the Stanberry Bulldogs.

“It’s really exciting, it’s been two years since our last win so it’s nice to win again and now we have to get ready for the next game,” Senior catcher Kaylin LaMaster said.

LaMaster was responsible for the game’s winning run after scoring on a fielding error after Stanberry’s first baseman pulled her foot off the bag fielding the throw from the infielder with two outs in the bottom of the eighth. In all the confusion, LaMaster broke for home and beat the throw to give Platte Valley the win.

“I was just waiting and I kind of got off a little bit and she turned her back, so I took off,” LaMaster said. “I saw an opportunity, so I just went with it.”

LaMaster hasn’t spent much time running bases this season as she is normally pulled for a pinch runner. Platte Valley coach Shelly Deen said it has nothing to do with her ability to run the bases.

“She is good at base running, she is one of my better baserunners and she has always known that she has permission to go,” Deen said. “She just read it right, she said she saw her turn her back and the catcher wasn’t there and so I went, and it all worked out.”

It wasn’t pretty in the beginning for Platte Valley who fell behind early. Starting pitcher Jessica Miller allowed a leadoff single to begin the game. Miller retired the next two batters and appeared to be on her way to a scoreless inning.

Miller walked Stanberry’s Lexi Craig to give the Bulldogs two runners on with two outs. Sadie Runde then hit a long fly ball to left field that was misread, landing behind right fielder Blair Stoll. The error allowed the two runs to score.

Malia Collins led off the bottom of the first with a double to center field. It was the first of four hits in the game for Collins. LaMaster then reached second on an error by the Bulldogs’ defense, the error allowed Collins to score for their first run of the game.

Stanberry retook the lead in the top of the third with an RBI single from Craig after Miller walked the inning’s first two batters. Ashley Petersen drove in the Bulldogs’ fourth run with an RBI double after working the count full.

Down 4-1, Platte Valley’s Stephanie Turpin started the bottom of the third with a single that turned into a double. Turpin then scored on a single from LaMaster, cutting into the Bulldogs’ three-run lead.

“I kept telling myself that we’re okay, we’re okay and that our bats always come through in the end,” Coach Deen said.

Craig’s second RBI of the game came in the top of the fourth on a one-out single with two on. Miller retired the next two batters to keep the deficit at three.

McQueen retired the first batter in the bottom of the fourth, but a single from Ally Wolf and a walk from Jackie Pappert gave the offense two on with one out. Stoll then drove in Wolf for Platte Valley’s third run.

Turpin and Collins completed the rally with a sacrifice bunt from Turpin, scoring Stoll and then a single from Collins to tie the game at five.

The teams remained tied through the fifth with Miller recording her first one-two-three inning of the day. Miller struggled with the Stanberry offense after pitching a no-hitter on Wednesday. Coach Deen went back-and-forth on whether or not to leave her in the game, but ultimately let her finish.

“All year long she has been that pitcher that is going to battle and she’s going to keep battling,” Coach Deen said. “Adam and I talked a lot and it was just one of those decisions you stick with and it worked out for us.”

McQueen’s RBI triple in the top of the sixth gave the lead back to the Bulldogs. Craig tried to give her team a little more insurance with a sacrifice fly to score McQueen and give Stanberry a 7-5 lead.

Platte Valley chipped into the lead in the bottom of the frame. Stoll’s second hit of the game gave her team one runner on with two outs and Collins up to bat. The Platte Valley shortstop then made it a one-run game with an RBI double.

“You have good days and bad days and today we just came with our game faces on and the ball was just there for me,” Collins said.

Miller allowed one walk in the top of the seventh but limited the damage to just the one walk. The Platte Valley pitcher turned around and led off the bottom of the inning with a single. Sydnee Deen followed her pitcher’s single with a double, giving the offense runners on second and third with no outs.

Ashley Mattson grounded out to the shortstop of the inning’s first out. Wolf then tied the game with a sacrifice bunt to tie the game at seven. Stanberry then intentionally walked Pappert before forcing freshman Kayley Hauber to groundout.

Miller retired the Bulldogs in order in the top of the eighth, leaving the Platte Valley offense needing just one run.

“Today let me know that I may not be on my best day, but we can pull together, help each other out and get through the game like we did,” Miller said.

Platte Valley will get a short three-day break before their sectionals game against the district two winner on Wednesday night. Coach Deen’s team will either travel to Princeton or will host North Harrison if the Shamrocks are victorious. Coach Deen said her team will focus on the little things this week in practice.

Confidence levels were high amongst players and coaches after rallying to advance to sectionals.

“I’ve told them all along that I think we’re just as capable as anyone here in northwest Missouri and we’re just going to have to keep playing our ball,” Deen said.