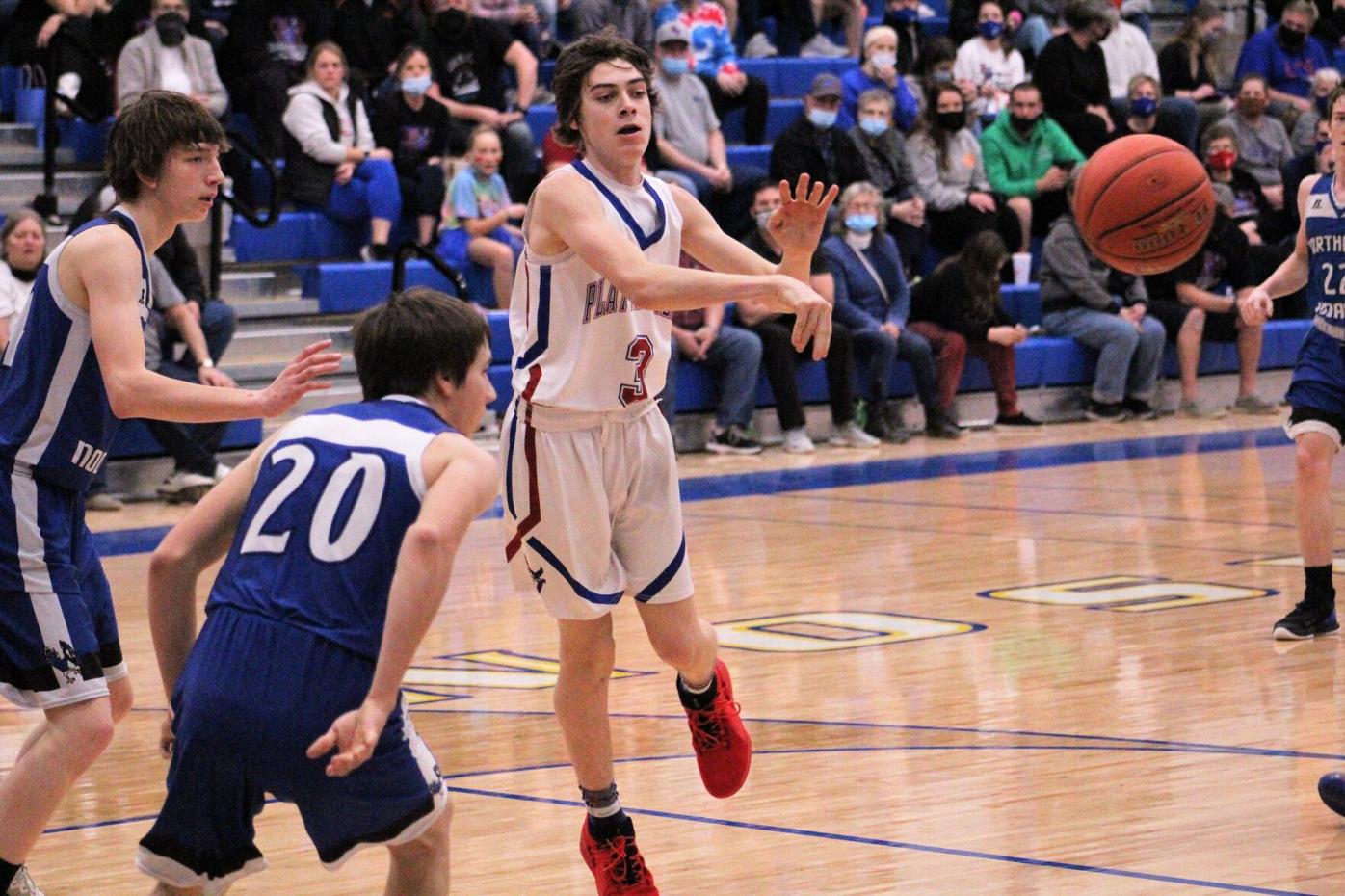 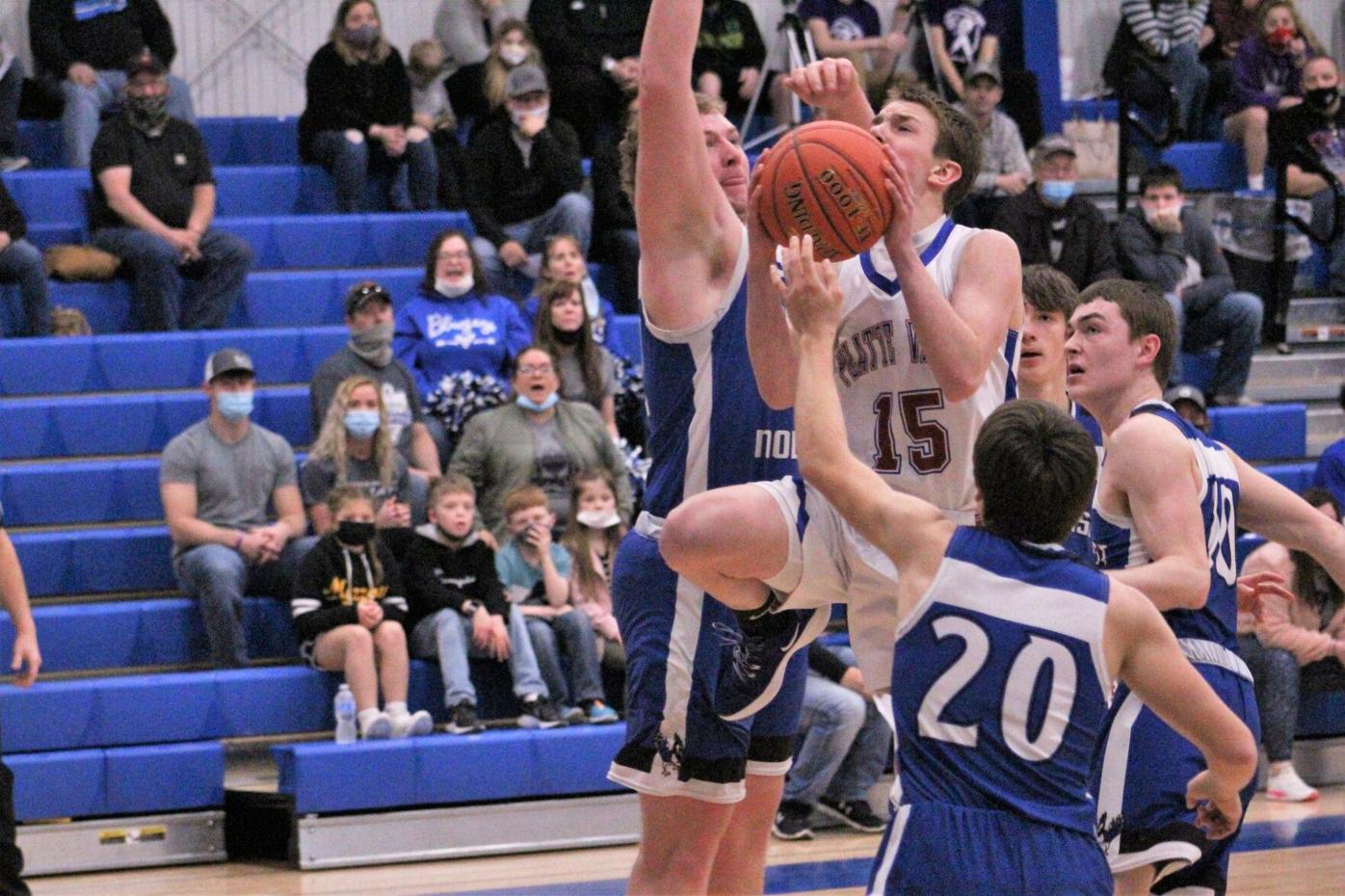 Platte Valley's Alex Mattson goes up between defenders for a layup Tuesday night at Jefferson. 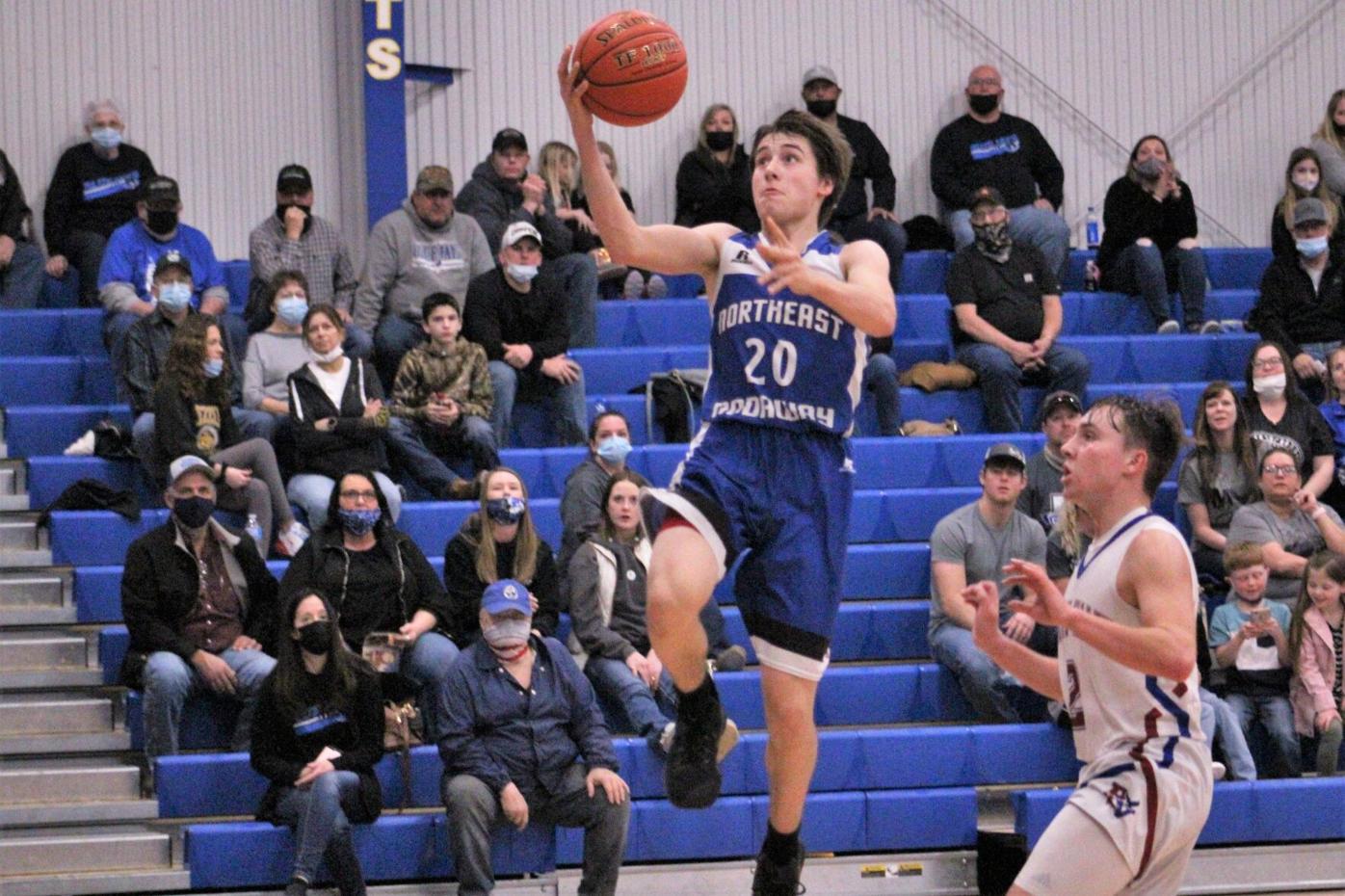 Northeast Nodaway's Ben Boswell goes up for a layup Tuesday night at Jefferson. 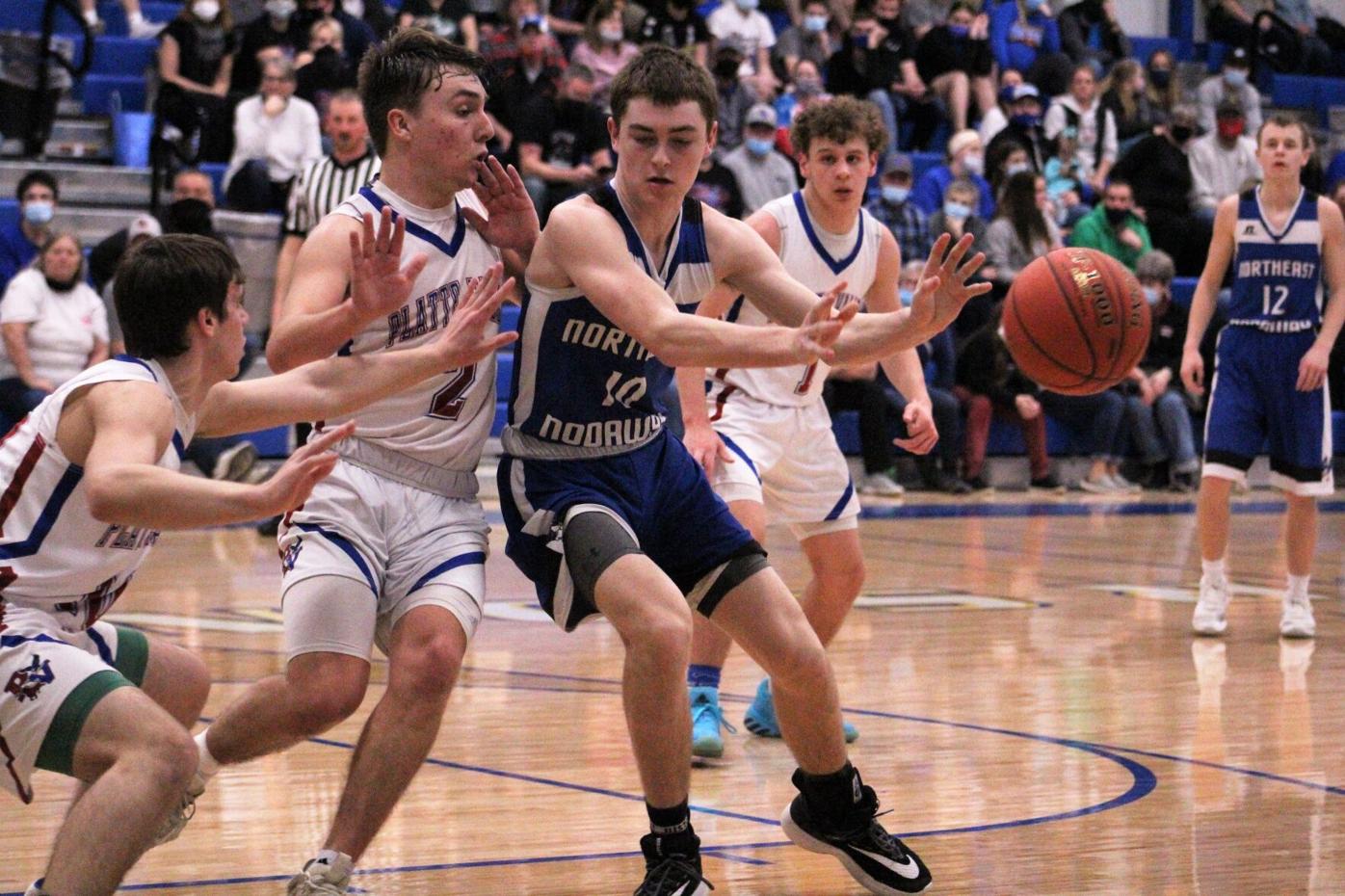 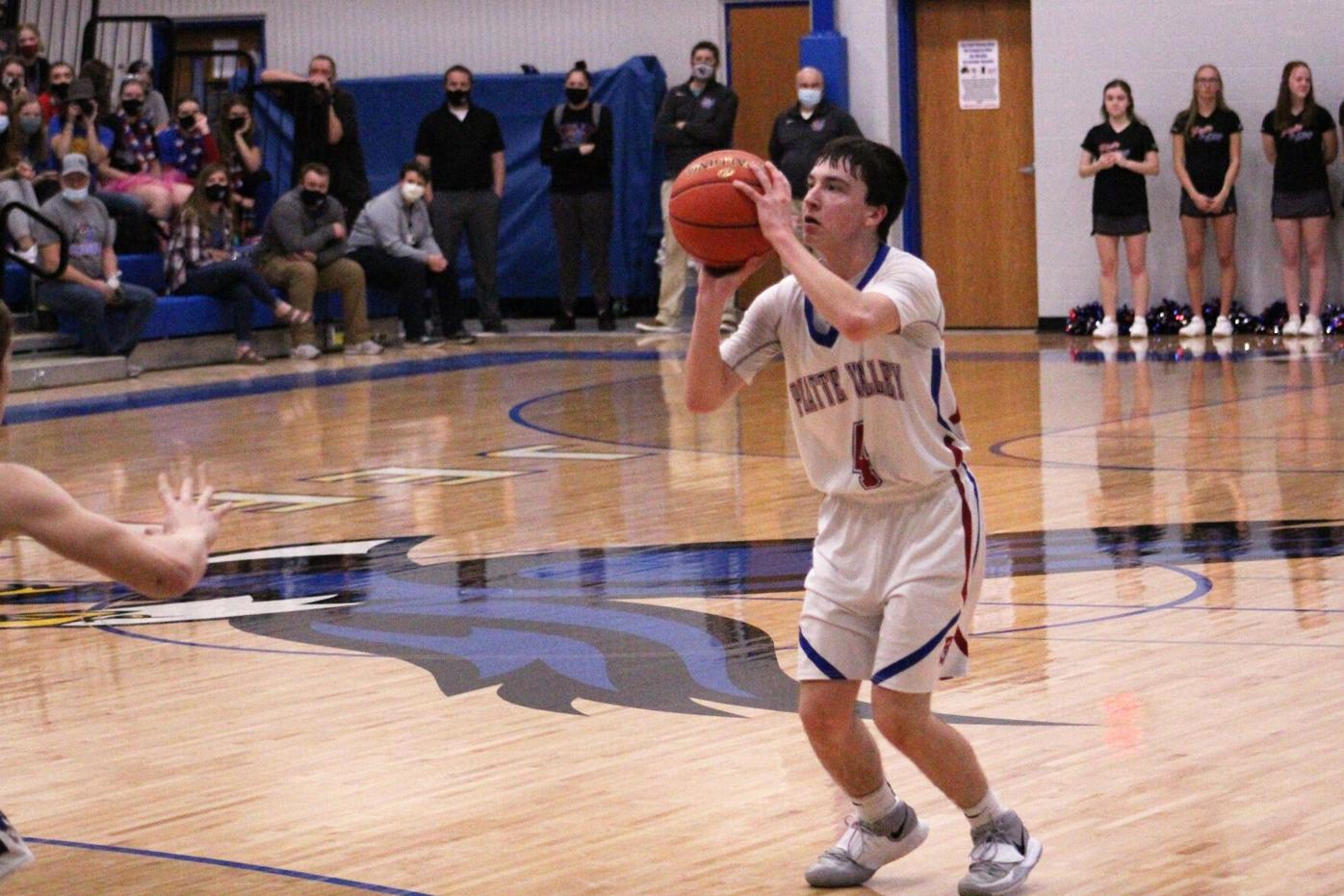 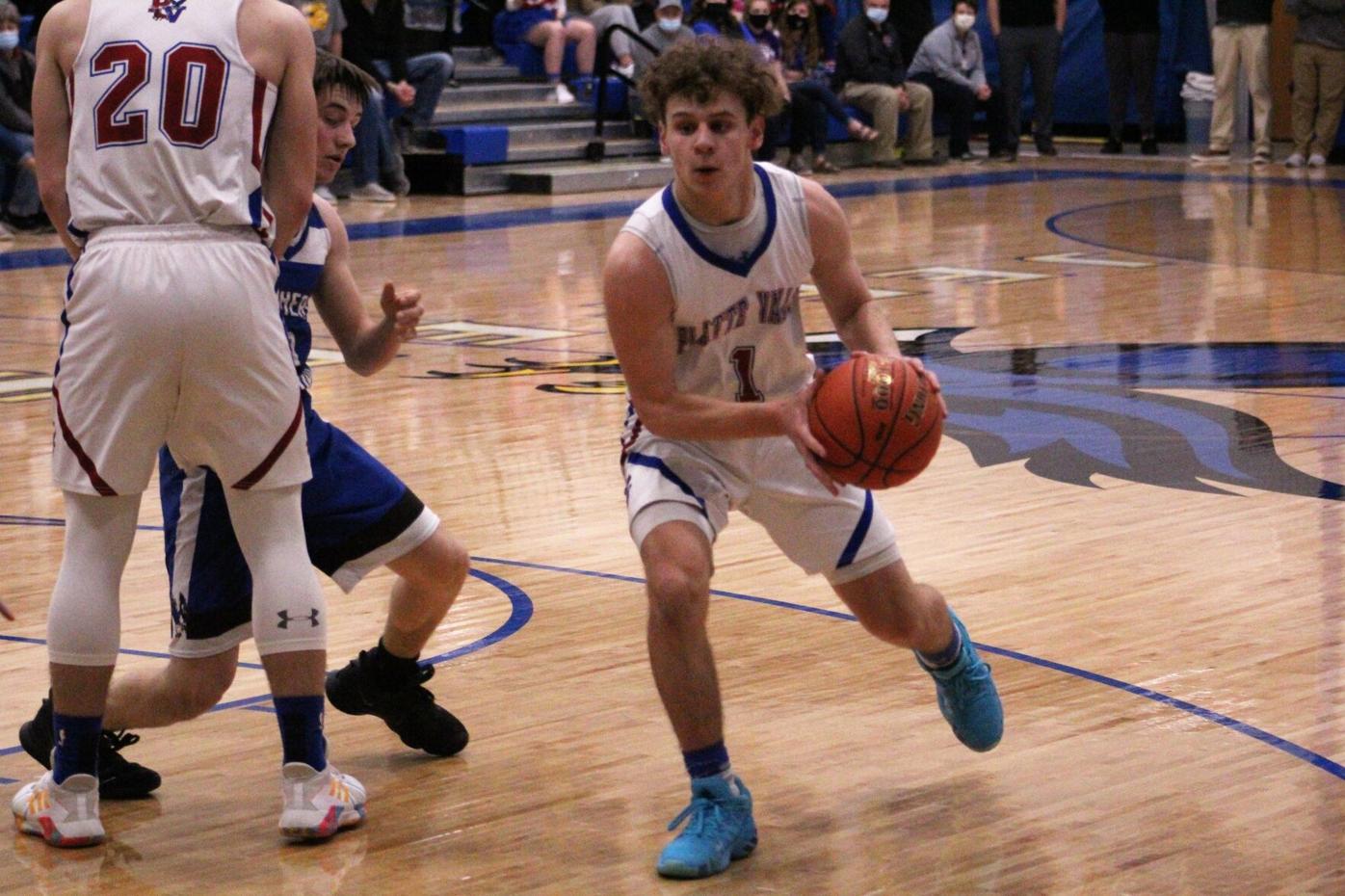 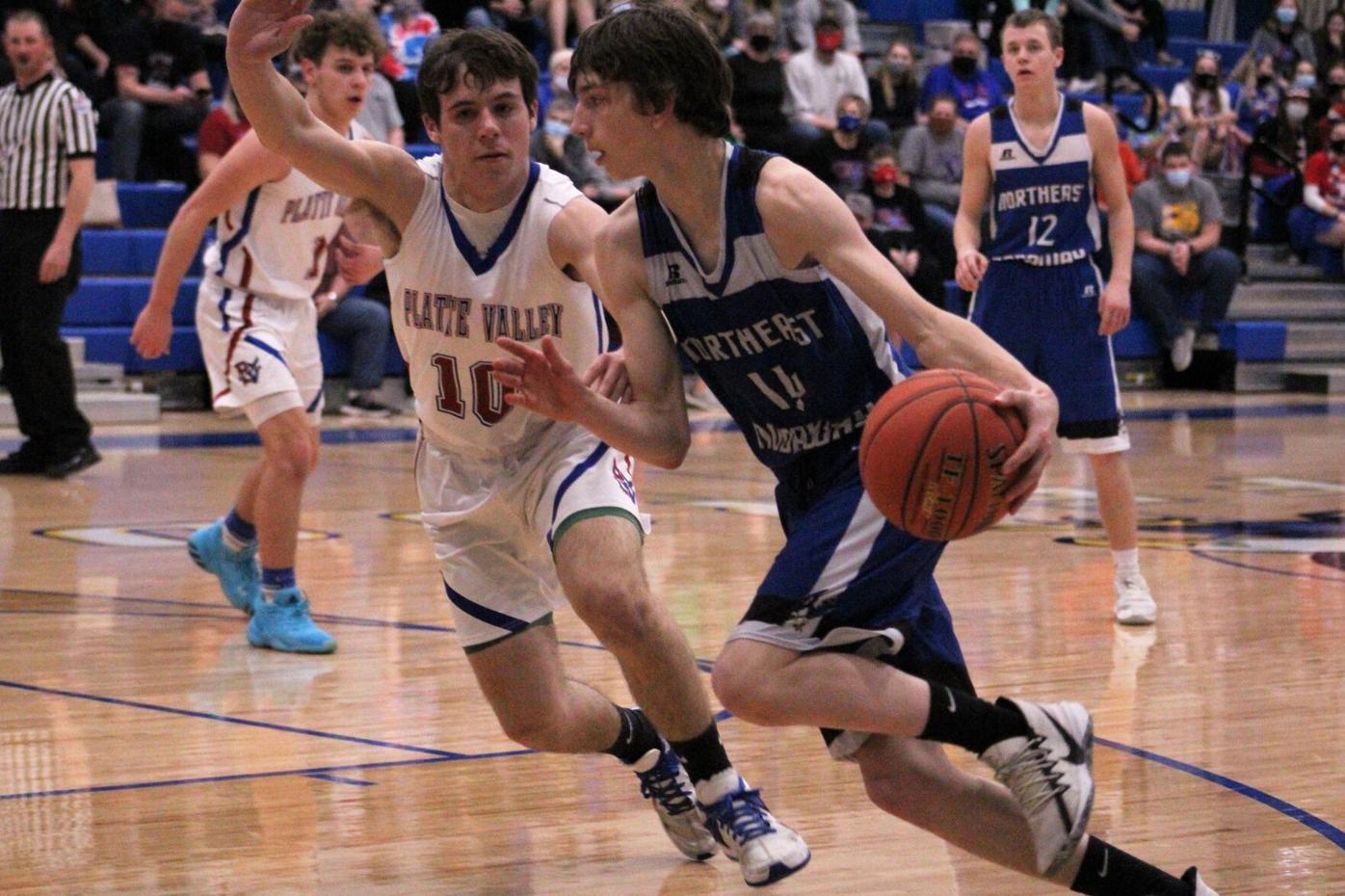 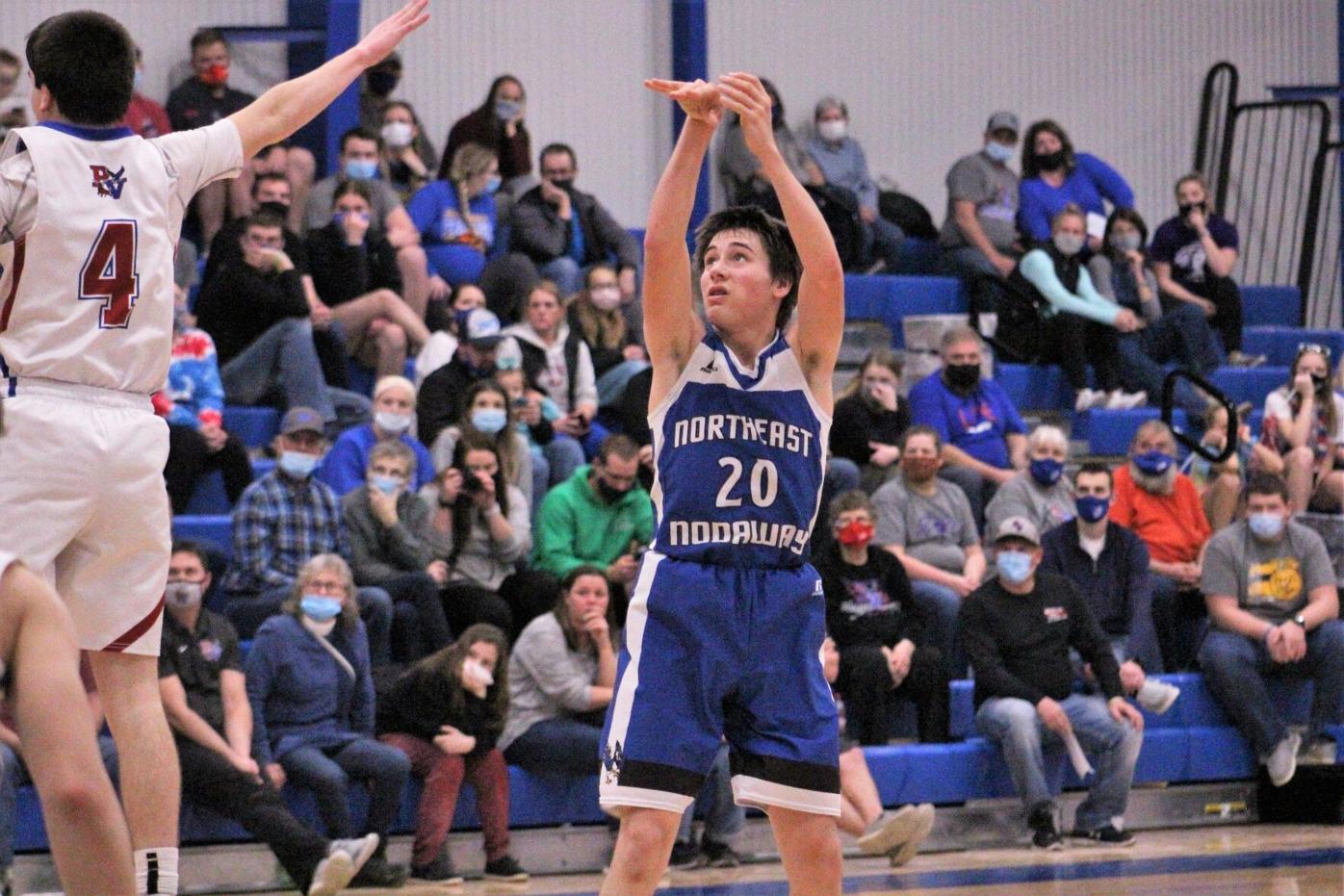 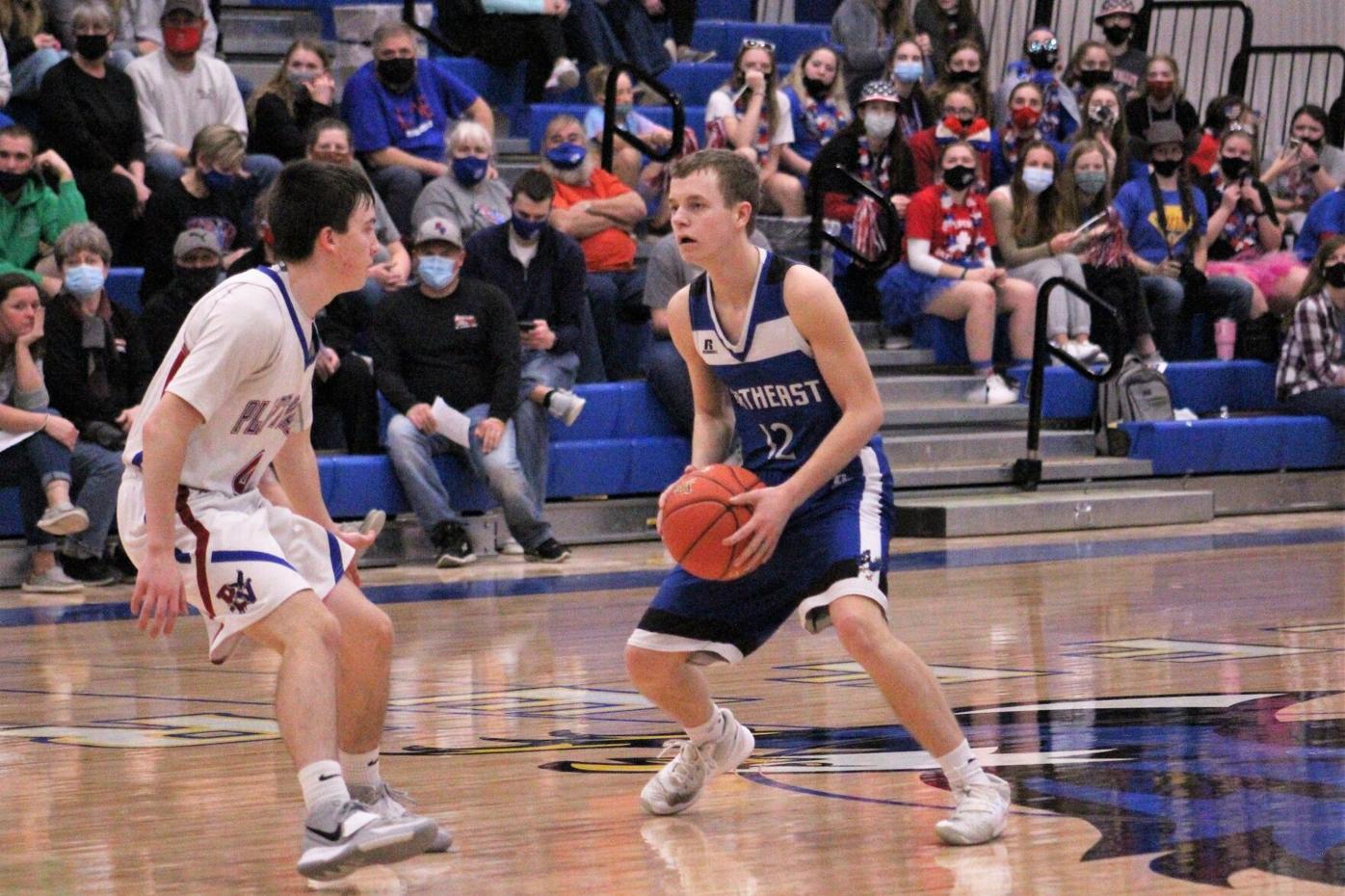 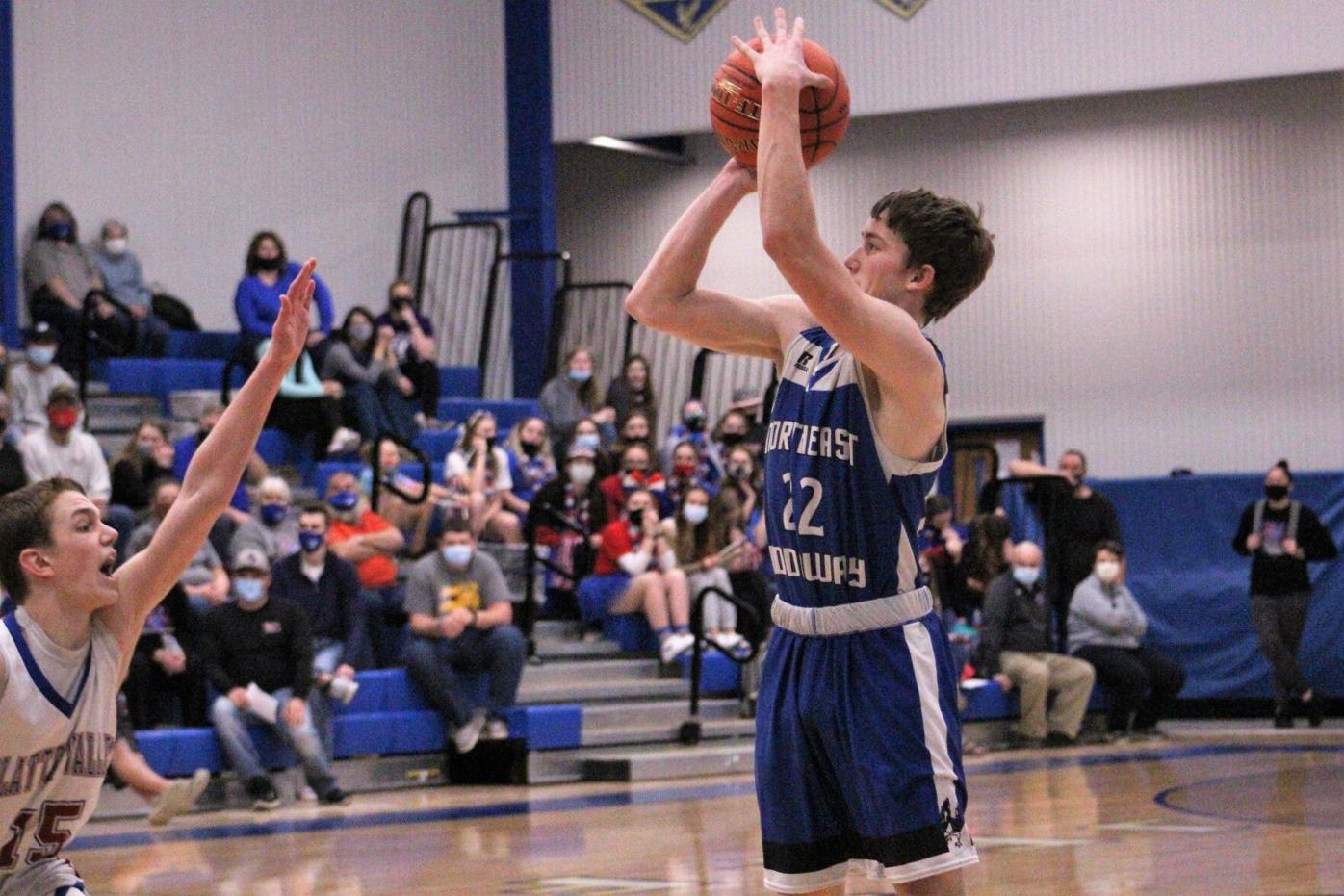 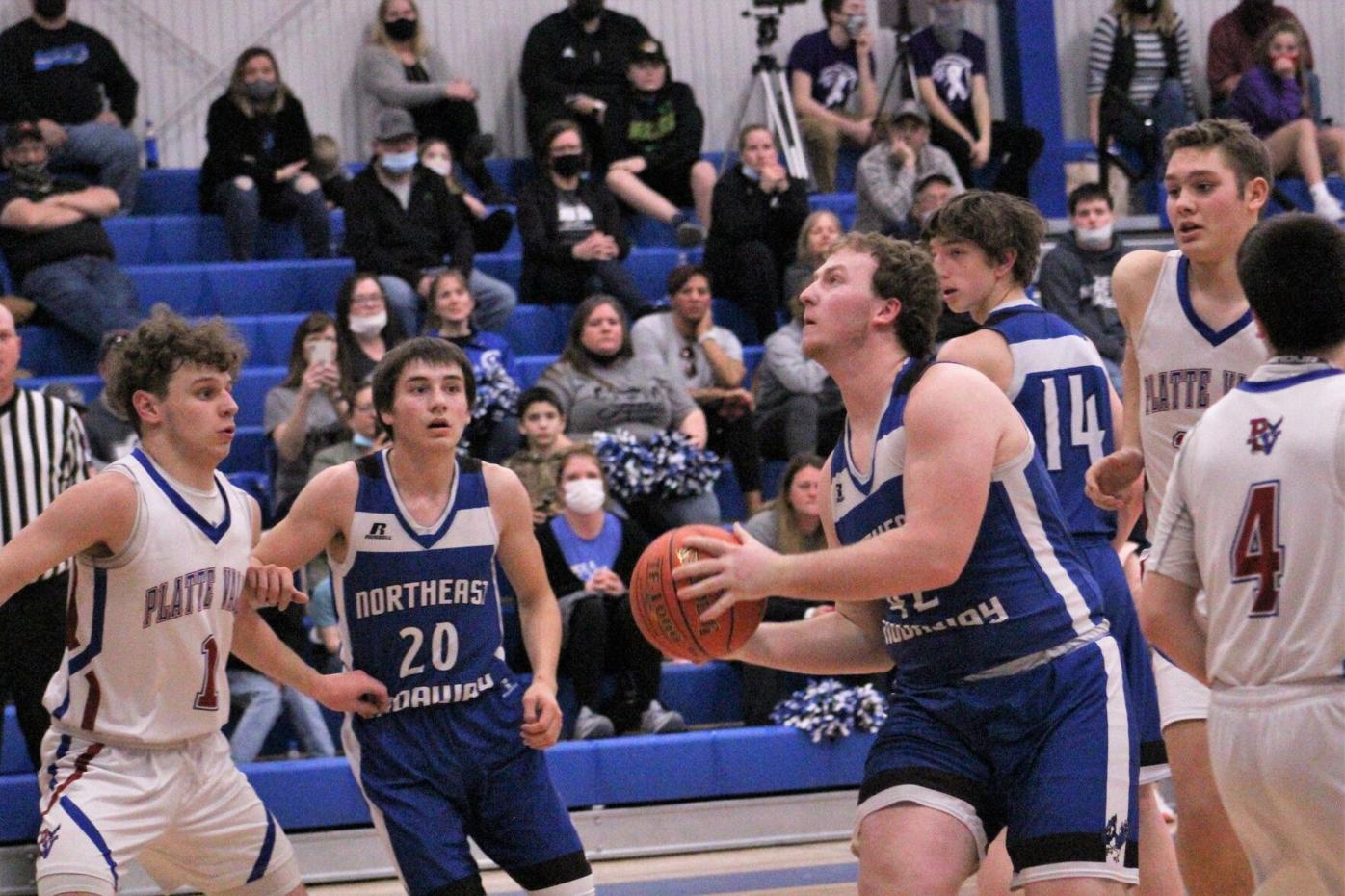 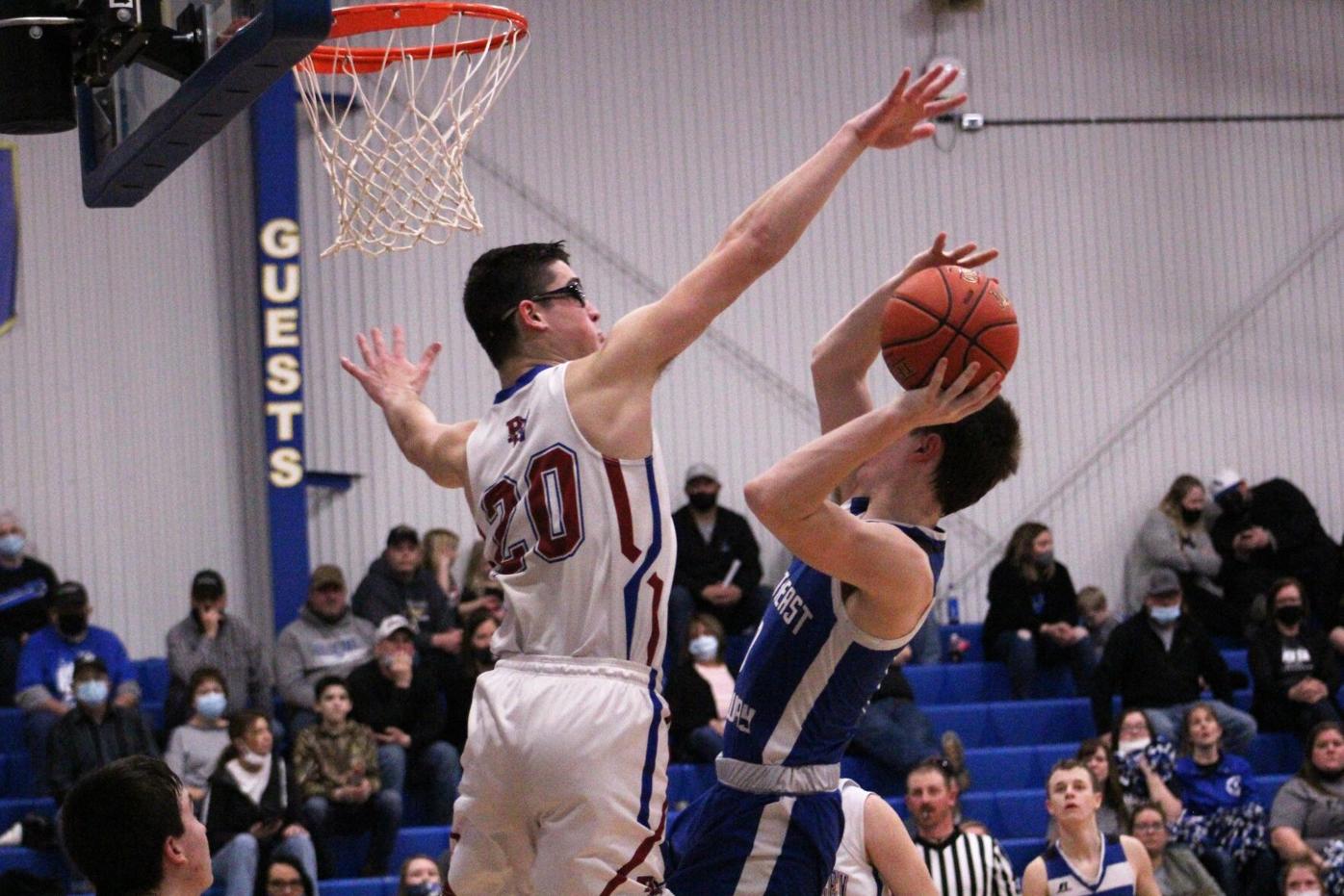 Platte Valley's Alex Mattson goes up between defenders for a layup Tuesday night at Jefferson.

Northeast Nodaway's Ben Boswell goes up for a layup Tuesday night at Jefferson.

CONCEPTION JUNCTION, Mo. – It was supposed to be a down year for Platte Valley. But they find themselves having won nine-straight and are headed to their eighth-straight district title game after a 66-44 win over the Northeast Nodaway Bluejays.

Despite the loss, Northeast Nodaway head coach Rory Jackson was happy with his team’s performance this season. The Bluejays finished with at least 17 wins for just the third time in the last 12 years.

“I thought they did a good job,” Jackson said. “You know if you look at our team as a whole, we only brought back two guys that had any varsity minutes last year. Two kids in a rotation of six kids and I know a lot of teams can say that, but for us, those other four kids and really all of them, improved throughout the season.

“Yes, we had our ups and our downs, but every team did. You can’t be mad at them for that because they’re teenagers and that’s life.”

The game was close to start as Gabe Nothstine and Gabe Swalley traded baskets to open the game. Dylan McIntyre then gave the Bluejays the lead with a basket on back-to-back possessions.

Trever McQueen tied the game at six with two free throws at the 5:17 mark. McQueen shot four free throws in the first three minute, but Nothstine picked up a pair of fouls over that same period. The two teams were called for a combined 11 fouls in the first quarter.

The game took a turn with just over four minutes left in the first with back-to-back 3-pointers from sophomore Matt Jermain. Wyatt Tobin added to free throws to cap a 10-0 run for Platte Valley over a two-minute span.

“I just thought that defensively, we executed well,” Platte Valley coach Tim Jermain said. “We played hard, but I thought that mentally we played really well defensively. Offensively, we really got in the flow of it and we’re playing with a lot of confidence right now.”

McIntyre scored six of Northeast Nodaway’s 10 first quarter points. But it was Jermain’s 10 points that helped Platte Valley to a 20-10 lead at the end of the first.

“We didn’t match their intensity level at all,” Jackson said. “I just thought they came out and wanted it more. I felt like we came out okay to start with, but we talked about how each side was going to make runs, but we can’t hang our heads. I just thought we got negative at times and that cost us possessions on both ends of the floor.”

A free throw from Lane Dack and a layup from McIntyre cut the lead to 11, but 3-pointers from Levi Burch and Jermain gave Platte Valley a 34-19 lead late in the second quarter. Bluejay guard Ben Boswell scored his first points of the game with 1:23 left in the first half. Burch then made two free throws and McQueen caught a half-court pass mid-air under the basket to beat the buzzer and give Platte Valley a 39-21 halftime lead.

“Gabe is starting to make post moves around the basket and defensively he’s doing some really good things,” Tim Jermain said. “He’s finished really well in the last month. A lot of those shots around the basket, he’s finishing and understanding what he needs to do. His development since Christmas has been tremendous.”

Matt Jermain led all scorers with 19 points, while McQueen was second with 16. For the Bluejays, McIntyre led the team with 15 and Austin Pride finished with 10.

For the third-straight year, Platte Valley will face Mound City in the district championship. Jermain’s team has gotten the better of the Panthers in their last two meetings, but it was Mound City who last defeated Platte Valley on Feb. 2, 72-37.

“Defensively, I think the biggest thing we learned from playing them is that they’re going to make shots,” Tim Jermain said. “I thought the first time we played them, we did a good job of contesting some shots that went in and then we kind of hung our heads. We just have to accept that they’re going to score and our biggest focus is that we’re going to have to worry about ourselves. We have to go play with a lot of intensity and just worry about ourselves to give ourselves the best chance we can.”