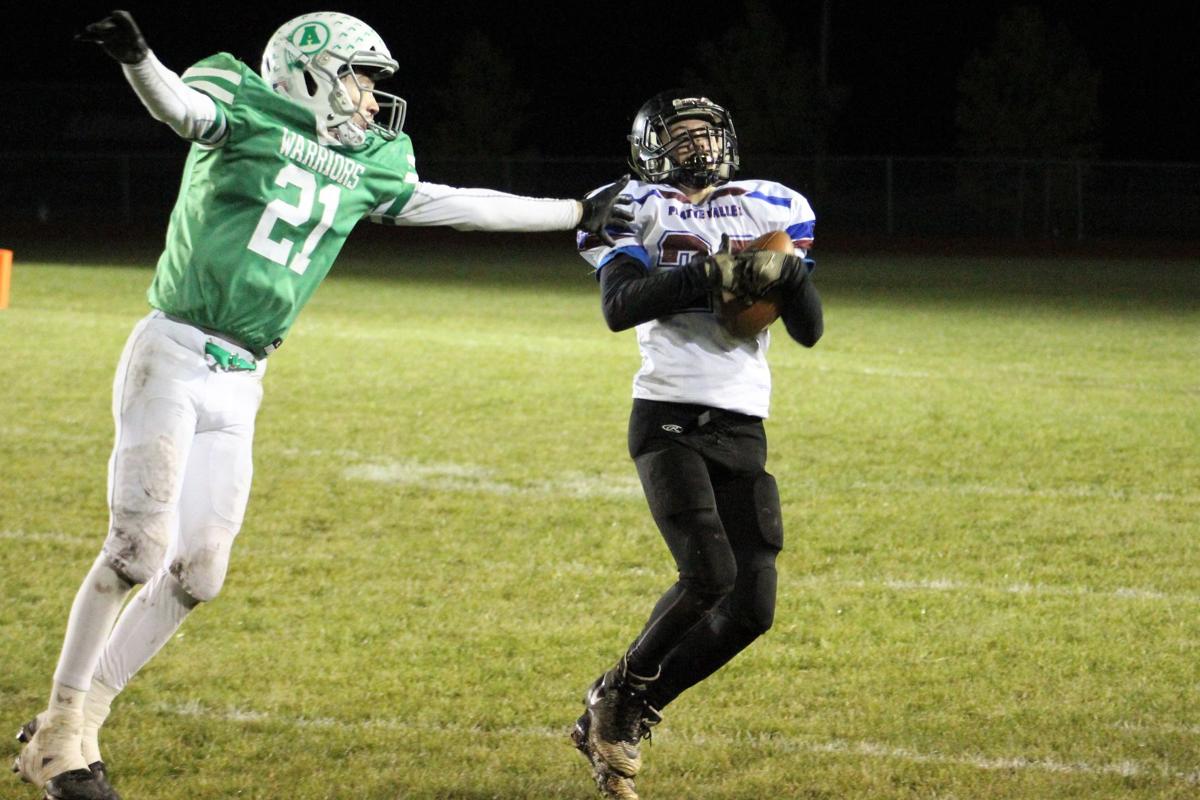 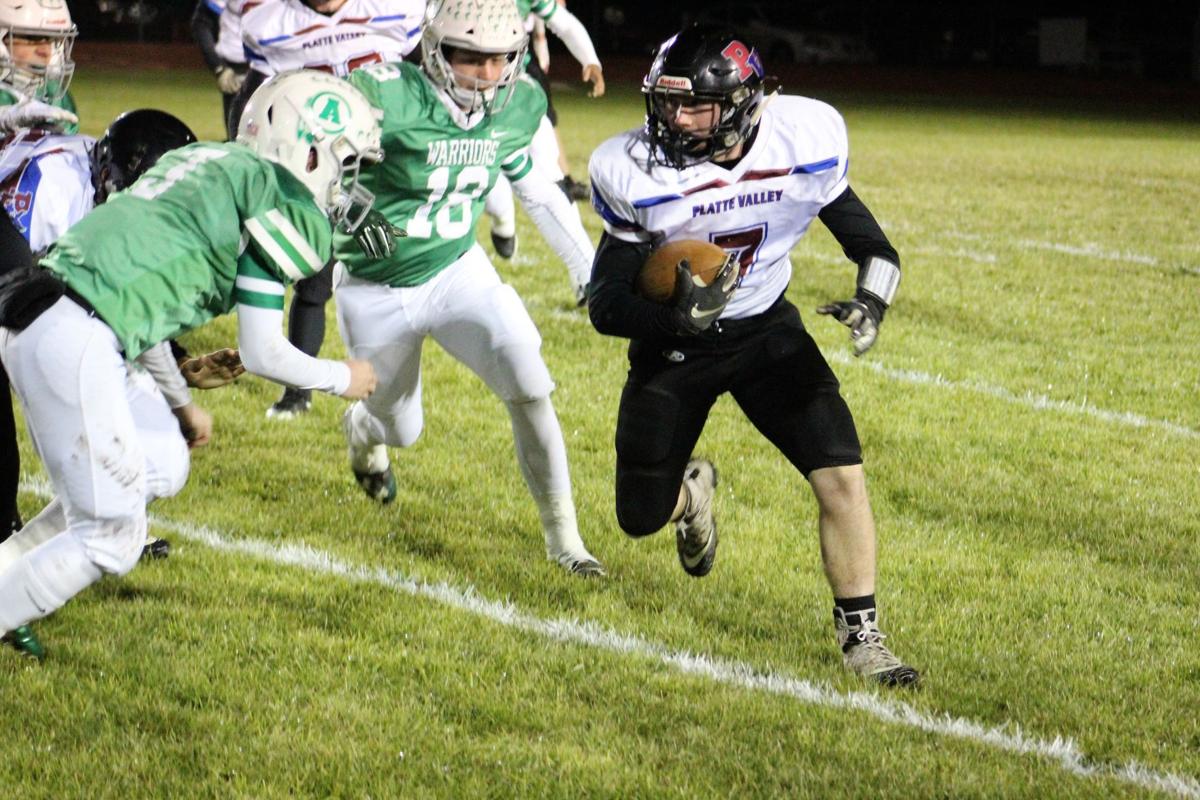 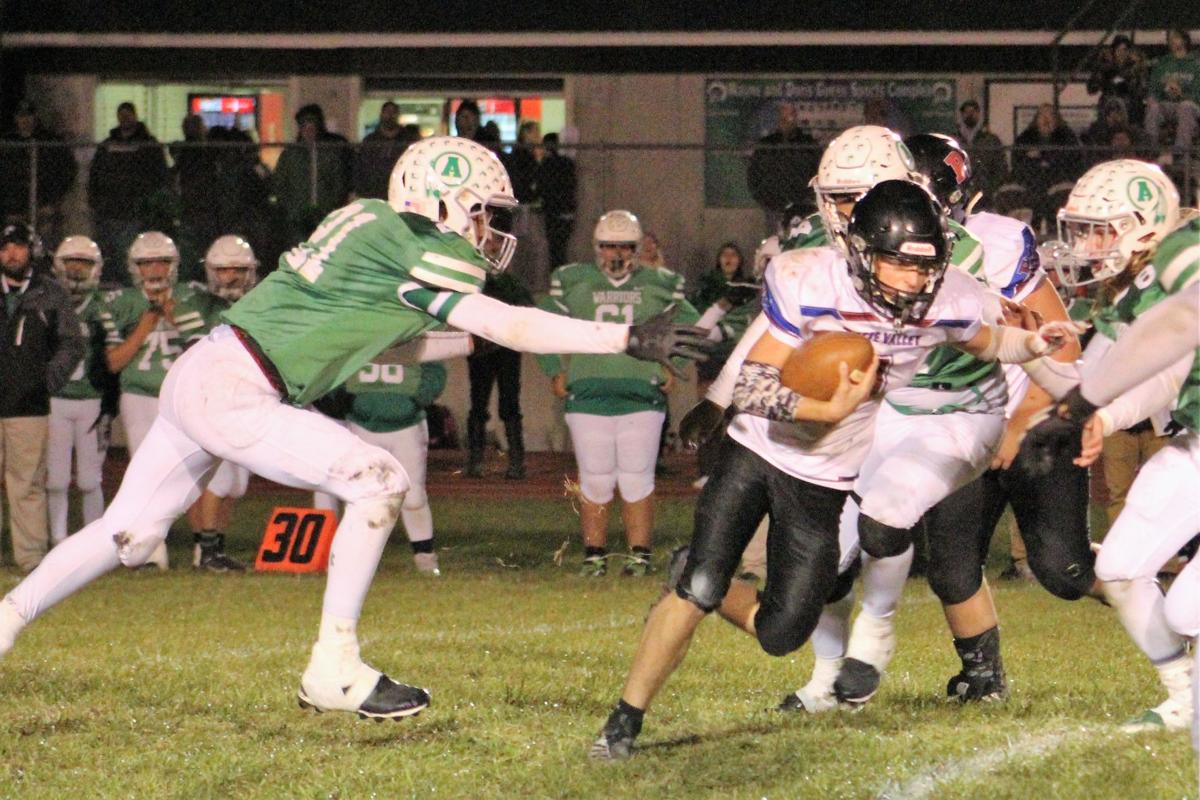 ALBANY, Mo. — The Platte Valley program is not what it was four years ago. Head coach Cree Beverlin has turned the Platte Valley team into a competitive program. Beverlin did that with the help of two seniors who's careers came to an end Friday night in a 78-32 loss to the Albany Warriors.

“Those two always found a way to make something happen, even if you were down 40 points, so we’re going to miss that for sure,” Platte Valley coach Cree Beverlin said. “We’re going to miss their leadership, our get-up guys and stuff like that. They meant a lot to the program; they worked hard, fun to coach and then good athletes that make good plays.”

“Back in the day we would have just laid down and let them steamroll over us,” Dalton Luke said. “We’re improving, we have younger guys coming up that are improving a whole bunch and they’re to takeover what Pat and I carried on.”

Luke rushed for 1,951 yards over his final two seasons at Platte Valley while scoring 42 touchdowns. Luke averaged 6.2 yards per carry and 103 yards per game.

O’Connor was the second-best weapon for Platte Valley over the last two seasons. The senior quarterback was second on the team with 192 carries over that two-year span, rushing 720 yards and passing for another 842.

“Practice was always fun, playing with Dalton who is the hardest working kid I know,” O’Connor said. “I hope he continues playing football. I wouldn’t have wanted to be in the backfield with anybody else.”

As for their final game, Platte Valley had no answer for the Albany rushing attack. The Warriors scored on rushes of 35 and 34 yards on their first two drives. Platte Valley trailed 22-0 after one quarter and had generated just 36 yards of total offense.

The Valley’s first opportunity to score came on their fourth drive as O’Connor and Luke combined to carry the ball eight times for 18 yards. Carter Luke helped get the drive going with a 13-yard catch. Platte Valley moved the ball inside the Albany 10-yard line, but on fourth and three—Dalton Luke came up a yard short, turning the ball over on downs.

Down 28-0 on their next drive, Carter Luke once again helped Platte Valley move inside Warriors’ territory with a 28-yard catch. A holding call on their second play of the drive took O’Connor’s touchdown off the board. O’Connor and Carter Luke connected for the second time on the drive on Platte Valley’s third play, resulting in a 21-yard touchdown.

“We’ve improved a lot of the last four years, the last three years we probably would have just given up,” O’Connor said.

The Valley defense could not stop the run and really struggled to stop Albany fullback Dawson Butterfield. Butterfield had touchdown runs of 34 yards and 19 yards in the first half. The latter of the two came with one minute and 46 seconds left in the half to give the Warriors a 36-6 lead.

The two offenses weren’t done trading punches, even with under two minutes left in the half. The Platte Valley offense netted just one yard on their first two plays of the drive. On the third play, O’Connor connected with Carter Luke for a second time, resulting in a 39-yard touchdown.

“I think it’s been great playing with him (Dalton), I’ve seen what he can do and I’m just trying to learn from that,” Carter Luke said. “I think the night I had is all because of him helping me and teaching me along the way.”

The momentum didn’t last long as Butterfield opened the second half with a 36-yard touchdown run. Platte Valley answered with a 35-yard pass from O’Connor to Dalton Luke, setting the offense up inside the Albany 10-yard line.

Platte Valley fumbled the ball on the next play, giving the Warriors the ball back with a 30-point lead. Butterfield then gashed the defense with a 66-yard touchdown run.

Dalton Luke responded on Platte Valley’s first play of the ensuing drive, rushing for a 39-yard touchdown. Platte Valley then recovered an onside kick attempt on the kickoff.

“Tonight, things didn’t work out in the first quarter, we were down 28-0 and our kids actually hung in there and responded in the second quarter and throughout the second half,” Beverlin said.

The Valley was unable to take advantage of the onside kick, turning the ball over on downs. The Warriors did take full advantage of their opportunity, scoring on back-to-back possessions to give themselves a 62-18 lead.

Carter Luke led Platte Valley with five receptions for 112 yards and two touchdowns. O’Connor finished the game going 10-of-16 for 187 yards, two touchdowns and an interception.

Platte Valley will have a few holes to fill next season, but Beverlin believes in the direction that his program is headed and saw some promise with the younger kids in the team’s final game of the season.

“It’s going to hurt for a while without those two, but for sure our young guys stepped up this year,” Beverlin said. “When you have a smaller program, you have to throw some freshmen in there, but we had some competitive freshman this year that helped us win some ball games. We’re not in a down spot by any means, I think there is some hope for the program, I think.”