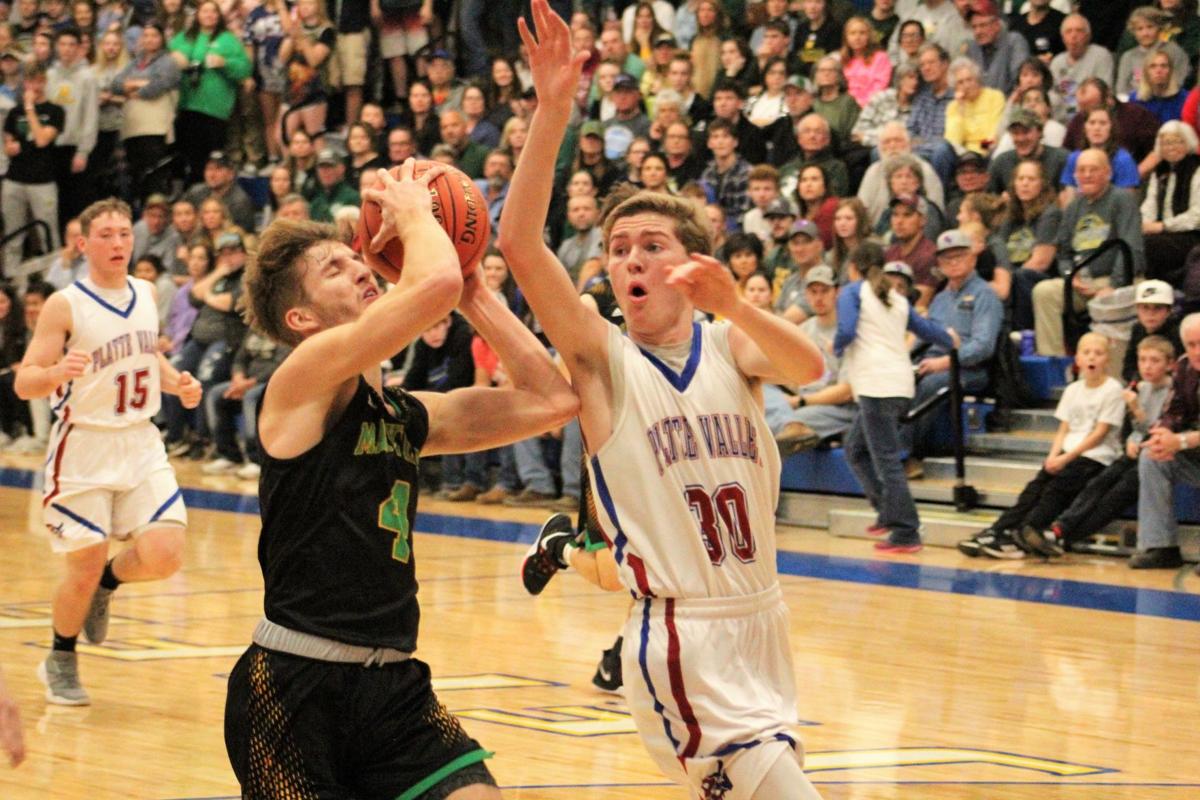 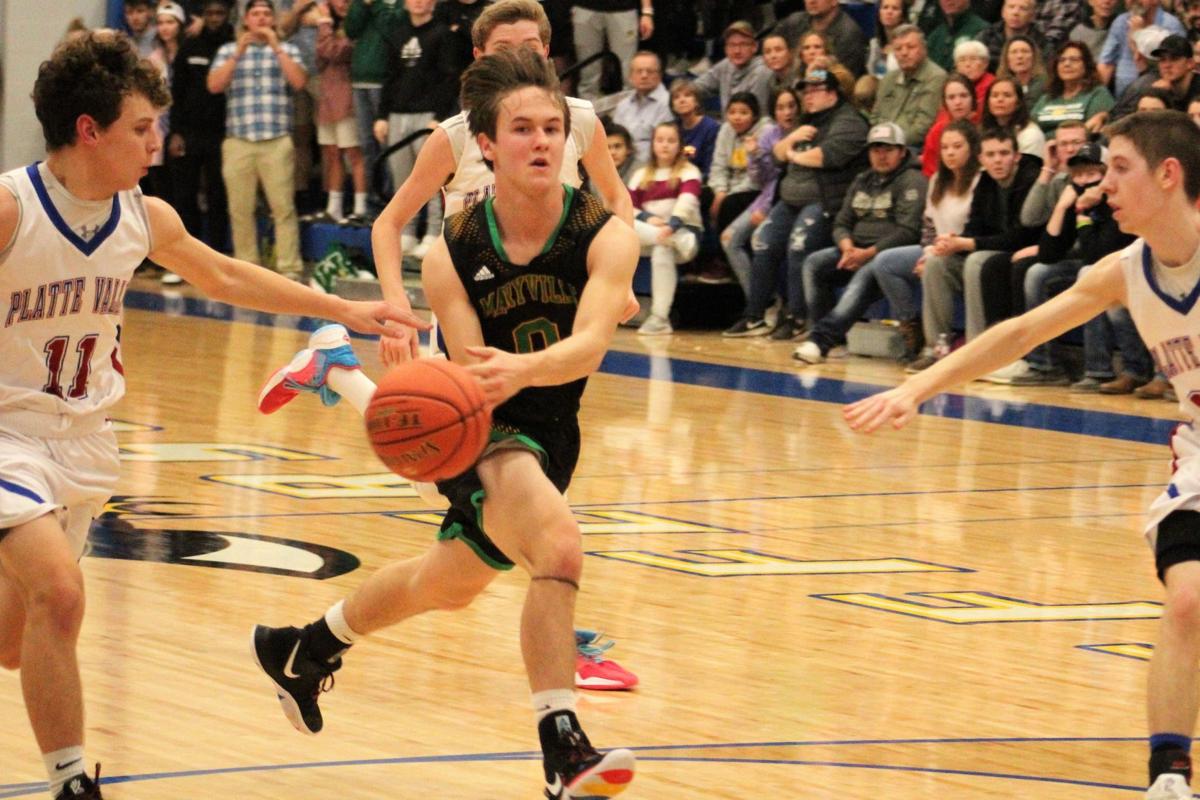 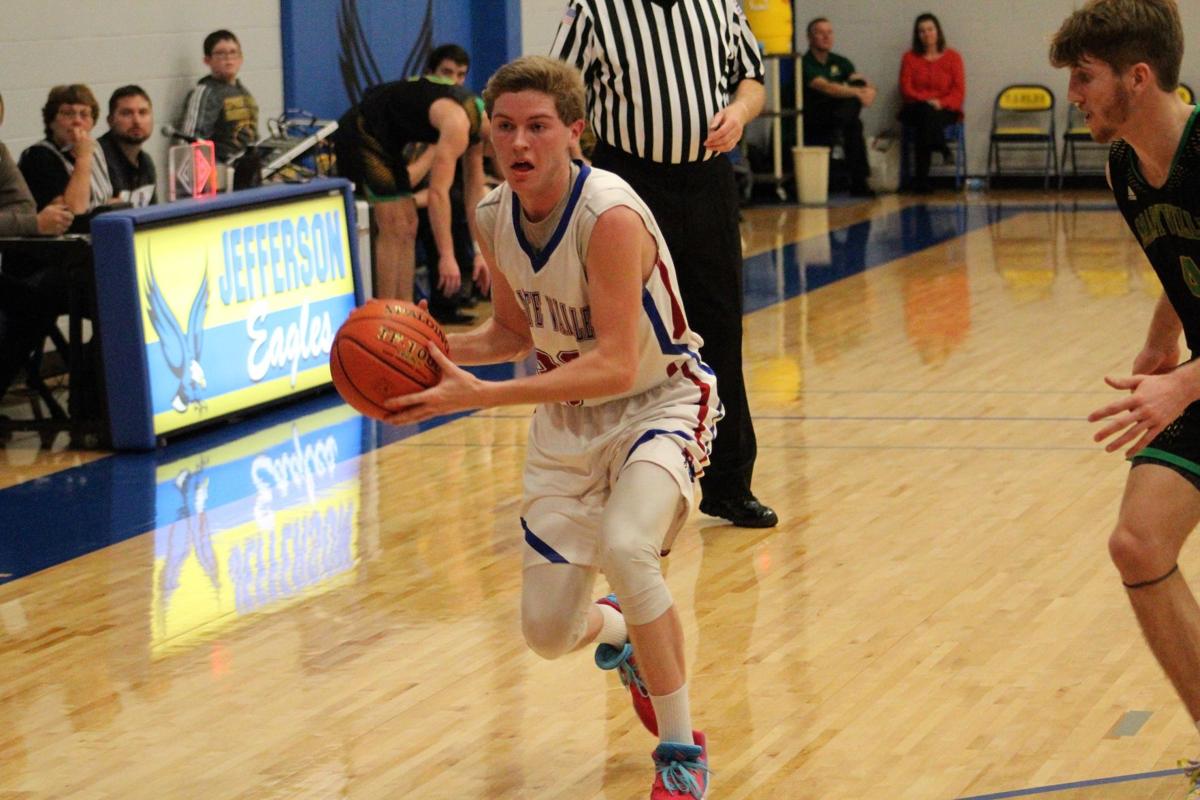 Platte Valley's Clayton Merrigan passes to a teammate against Maryville. 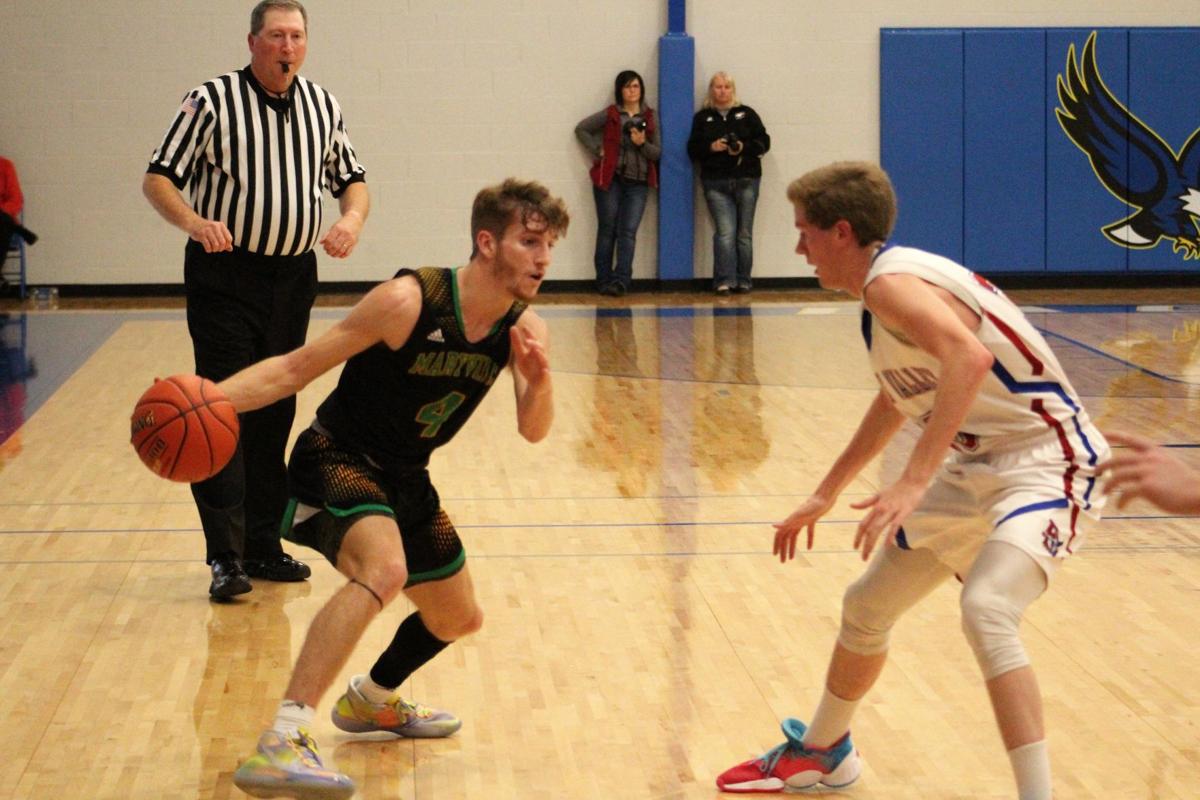 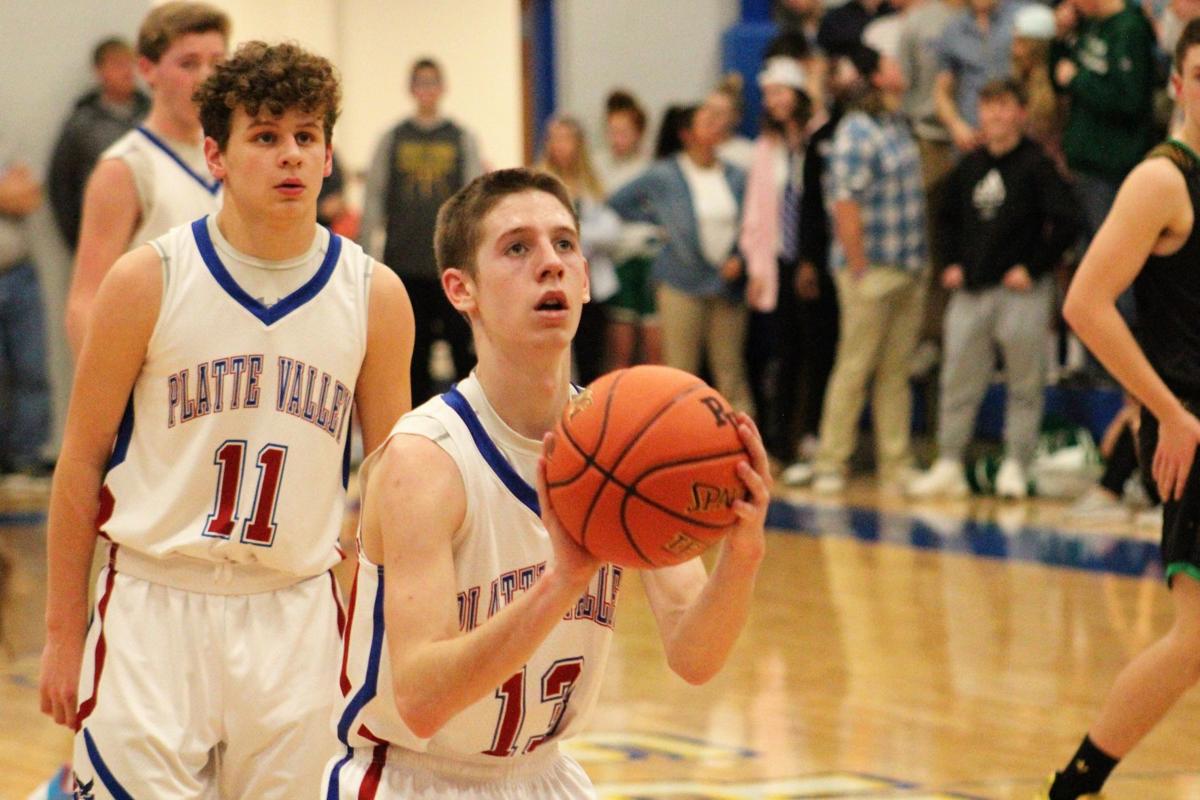 Platte Valley's Clayton Merrigan passes to a teammate against Maryville.

CONCEPTION JUNCTION, Mo. – The rivalry doesn’t involve a highway sign. There are no conference implications and by the end of the season the game will only show up in the win-loss column. But make no mistake, the Platte Valley and Maryville rivalry means something to both schools and that showed Friday night in the overflowing gym at Jefferson High School.

Platte Valley led and led by a good margin for most of the game. The Spoofhounds trailed by 10 with three minutes left, but cut that lead to three with five seconds remaining. Maryville’s final shot rattled out of the rim and Platte Valley left with a 69-66 win.

“Like I told the players, who could ask for a better atmosphere to play in,” Platte Valley coach Tim Jermain said. “It was a great atmosphere and a fun game to play in.”

Maryville took the initial lead on the game’s first possession with a drive from freshman Caden Stoecklein. The chants of, “He’s a freshman” quickly and loudly echoed off the gym walls from the Spoofhounds’ student section.

Platte Valley senior Steven Chor quickly quieted that quarter of the gym with a three-pointer to give Platte Valley its first lead. Chor was making his first appearance of the season after missing the first four games with an injury.

The back-and-forth tussle for the lead continued throughout the first quarter. The two teams traded the lead seven times in the game’s first three minutes.

Platte Valley center Chase Farnan gave his team its biggest lead of the quarter at the 3:15 mark at 16-11. A 5-1 run from the Spoofhounds cut the lead to one after Tate Oglesby made one of two free throws.

Senior Clayton Merrigan’s steal with 13 seconds left in the quarter pushed the lead back out to five. Merrigan scored eight of Platte Valley’s 21 points in the opening quarter. Caden Stoecklein responded with a jumper with one second left, leaving the Spoofhounds trailing 21-18 at the end of the first quarter.

Oglesby started the second quarter with a layup and a steal on back-to-back turnovers by the Valley. The four-straight points gave Maryville its first lead since early in the game.

Merrigan answered Oglesby’s run of points with five of his own to give Platte Valley a four-point lead. The Valley stretched its lead to 10 with two and a half minutes remaining in the half. Farnan scored nine points over the final four minutes of the half, helping to a 37-29 halftime lead.

“He’s (Farnan) really a tough matchup in there and does a good job of working for the ball and he finished well tonight against some really good players,” Jermain said.

Platte Valley had its  lowest offensive output in the third quarter, scoring just 13 points. Unfortunately for the Spoofhounds, their offense struggled as well—scoring just 11 points and trailing by 10 heading into the final period.

After a low-scoring third quarter, the two offenses came to life early in the fourth. For the Spoofhounds, it was Ben Walker who gave the offense the kickstart it needed to rally late in the game.

“The boys even mentioned that the one good thing that happened tonight was Ben finishing,” Matt Stoecklein said. “And did it with good sized kids inside, Farnan inside, Ben was finishing and going up with the mentality that I will make this. I think we take shots hoping it will go in, but Ben was finishing.”

“A couple of turnovers and we just let them back in it, but we do a good job in the end of closing this thing out and getting a good win,” Farnan said.

Platte Valley’s Trevor McQueen was fouled and sent to the free throw line with 23 seconds on the clock. McQueen made both free throws, but Stoecklein quickly made it a one-score game once again with 14 seconds remaining.

The Spoofhounds fouled Chor with just over five seconds remaining. Chor needed to make just one of the two free throws to give the Valley a two-score lead. Chor missed both, but with no timeouts remaining, Maryville was unable to stop the clock and Trey Houchin’s three-point attempt rimmed out.

“That’s just a team that we were having a hard time stopping on defense for us to even have a shot to tie it,” Matt Stoecklein said. “Trey had a great look to tie that ball game at the end and it just didn’t fall in—but a great effort there.”

Farnan and Merrigan led Platte Valley in scoring. Farnan scored 25 for the second-straight game, while Merrigan finished with 23.

“We knew coming into this that it was a pretty big rivalry, we’re friends with some of the Maryville kids and played with them in the past,” Farnan said. “It was good to see them out here, playing in a good game and had a lot of fun.”

Maryville coach Matt Stoecklein was disappointed in the final result, but was happy to see Walker and Caden Stoecklein’s performances. Walker led the team with 22, while Stoecklein finished with 13.

“I think his (Caden) points were more spread out, but I felt Ben’s points,” Matt Stoecklein said. “Caden really spread his points out which was great to help and Trey hit a couple of shots.”

Stoecklein believes there is still one player that the offense has to get more out of in the future.

The Spoofhounds will try and end a three-game losing streak Monday evening when they host the East Buchanan Bulldogs. The Bulldogs come in at 4-1 but have played just one team with a winning record so far this season.

“I’m trying to stress this to the kids, let‘s just survive this and let’s learn from it and get better,” Matt Stoecklein said. “When we get into the meat of our season, we’re going to be so much better prepared.”

Platte Valley will host West Nodaway on Tuesday evening before traveling to Rosendale on Thursday to face an undefeated North Andrew team.

“Games like this can be very beneficial because throughout the year we’re going to have several tough games and this really prepares us for the end of the season,” Farnan said.