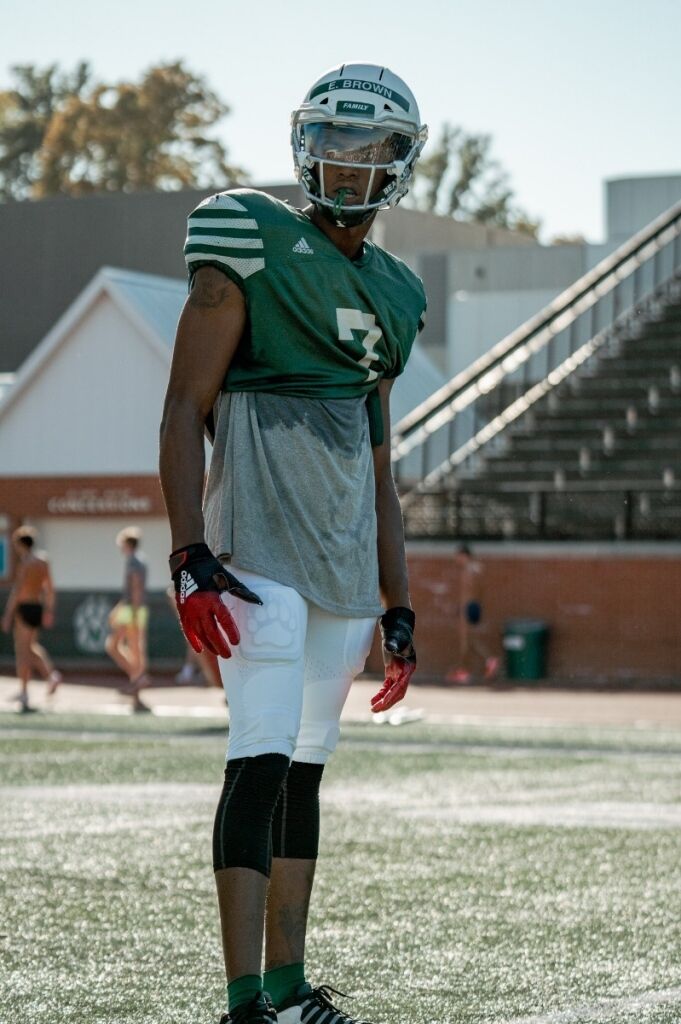 Northwest Missouri State junior Edwyn Brown looks to the sideline during a practice at Bearcat Stadium this fall.

Northwest Missouri State junior Edwyn Brown looks to the sideline during a practice at Bearcat Stadium this fall.

MARYVILLE, Mo. — The Northwest Missouri State fans are known to be among the most supportive college football fanbases in the country. During a normal fall, fans pack Bearcat Stadium on a weekly basis to cheer on their Bearcats.

Northwest head football coach Rich Wright is asking Bearcat Nation for another kind of support though as junior defensive back Edwyn Brown has been hospitalized since early November until recently being moved into a rehabilitation facility.

“He and his family have been in the hospital since the first week in November,” Wright said. “It is kind of amazing that we’ve all had three holidays that have gone by — Thanksgiving, Christmas and the New Year — and they’ve been in a facility for every single one of them.”

Wright has created a gofundme.com page for the family.

Brown joined the Bearcats this season after transferring from FCS program Eastern Illinois. The 6-foot-3 defensive back is in the perfect mold for what the Bearcats like to see on the backend of their defense.

“He is a long kid, runs really well and showed some glimpses as we went through practice this fall,” Wright said. “… Can play both positions on the backend — both safety and corner.”

Since being on campus, Wright has been really impressed with Brown in the limited practices this fall.

“He is a great character kid, has an infectious smile,” Wright said. “He has just been a really fantastic addition to our program.”

After the team’s scrimmages were canceled this fall, Wright received a call from Brown’s mother asking him to check on her son.

“It was a Friday night and his mom had called me because he didn’t want to go to the emergency room, but he was acting strange and not feeling well, so she reached out to me,” Wright said.

Wright was quarantined, but head football trainer Elizabeth Hevern went to make sure Brown was alright. Havern took him to the hospital in Maryville.

Once in the hospital, Brown’s condition went downhill in a hurry. He was transferred to St. Joseph, and after a little less than a week in St. Joseph, was flown to St. Louis.

“He really trended poorly,” Wright said. “He went to Maryville for just a short time and they just didn’t feel like they had the facilities to care for him. So he went down to St. Joe and he deteriorated quickly, so they made a decision to life flight him to St. Louis, and I guess, thank God they did.”

Brown’s illness continued to be a mystery as he began suffering from multiple emergency situations with clots in his brain, both his lungs collapsing, an inability to use his arms or legs and he needed a feeding tube and ventilator.

While Brown’s illness remains a mystery after a multitude of tests, Brown’s condition greatly improved as Wright says he has shown the determination and spirit that makes him the type of football player that the Bearcats covet.

“He really didn’t start to trend positive until Christmas, it was really that long,” Wright said. “When you start to think about a 22-year-old kid who has a (tracheostomy) tube, a feeding tube, is on a ventilator, has had multiple brain clots, couldn’t move his arms and legs, when you talk about the spinal taps that he had to go through, the CT scans, and just everything.

“It is amazing what that kid has been through in the last two and half months. It just says something about his spirit and his toughness.”

After nearly three months in the hospital, Brown has now been transferred to a rehabilitation facility in Chicago where he will be for at least four weeks.

Wright has set up a gofundme.com page in an effort to raise money for the family which has already eclipsed over a million dollars in expenses. The listed goal for Wright’s page is to raise $50,000 and through five days has raised over $28,000 from 479 different donors.

“It means a lot,” Wright said. “We tell kids when we recruit them here that when you come to Maryville, it is truly a family. Those people who sit up in the stands aren’t just fans. They get to know our kids and know them as people. When one of ours is going through a tough time, they respond.”

Wright has kept up consistent communication with Brown’s mother.

“We talk probably three or four times a week, and she’ll send me videos and things like that,” Wright said. “She has been great. She came up to campus one night and it has just been tough. Their resolve is truly impressive, as well as their faith. She was going to protect her baby and that is exactly what she did.”

Wright says he has been proud of how many former Bearcat players have contributed, many of whom have never met Brown. Some of those players haven't suited up for Northwest since the 1990's.

“This is a special place and I think that is what makes Maryville unique,” Wright said.

The Brown family posted an update to the page on Friday thanking Bearcat Nation for its “monetary support along with prayers and words of encouragement.”

The post also reads: “We are extremely grateful and appreciate all of the prayers and encouragement. His recovery is progressing nicely. He is getting stronger daily. This is definitely a marathon and not a race. Your continued support is appreciated.”

Brown himself tweeted out earlier this week, “Man the love is crazy, I’m extremely blessed and grateful to have everyone support me in this path to recovery!” and also added, “Shoutout Bearcat Nation! I appreciate everyone, and I’m getting stronger everyday! Can’t wait to get back on the field and get us a natty.”

Bearcat Nation can’t wait for that ‘natty’ either, but more importantly to see a healthy Edwyn Brown in the green and white again.

Shoutout Bearcat Nation ! I appreciate everyone and I’m getting stronger everyday ! Can’t wait to to get back on the field and get us a natty 💯 https://t.co/frwqu95Mj4