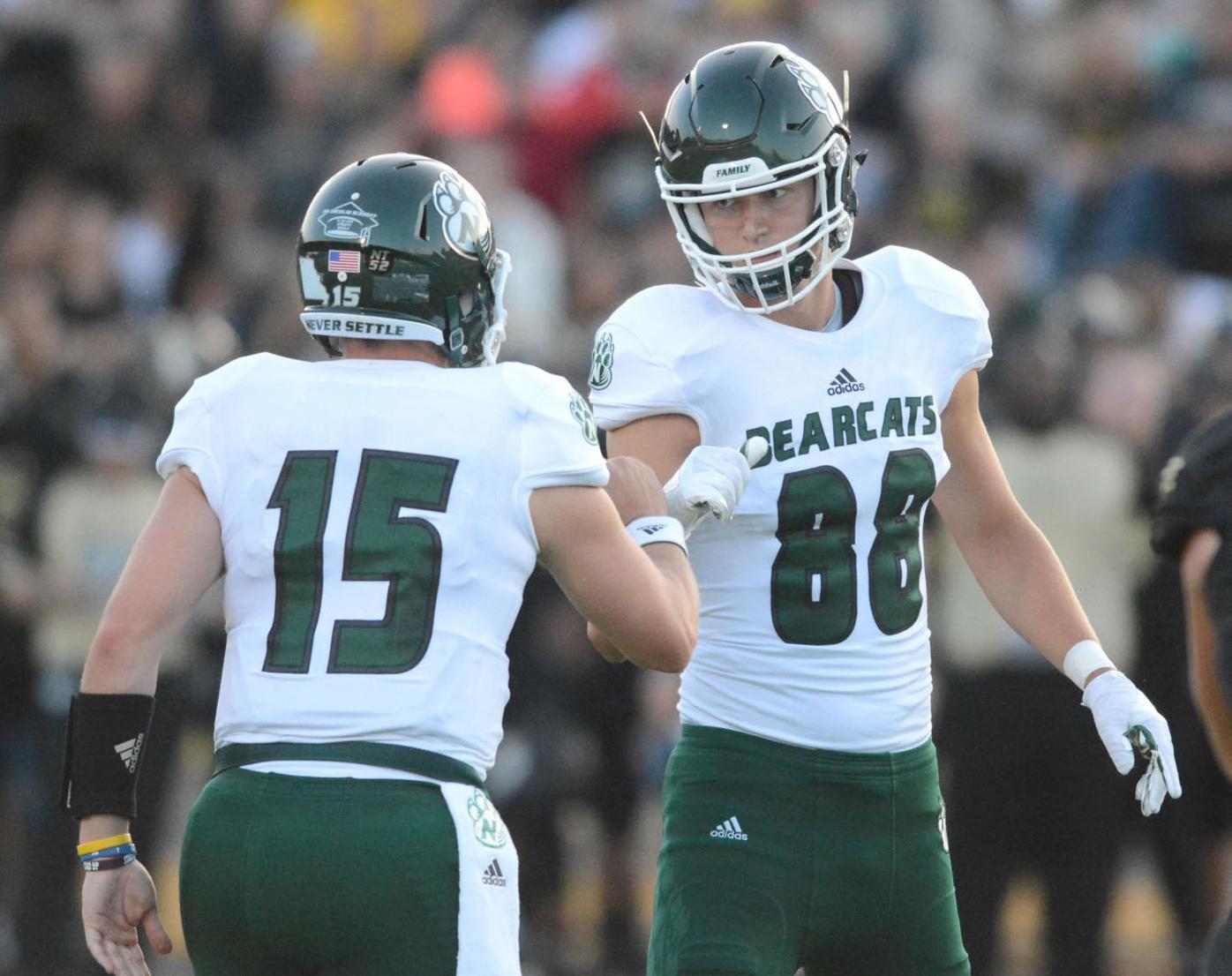 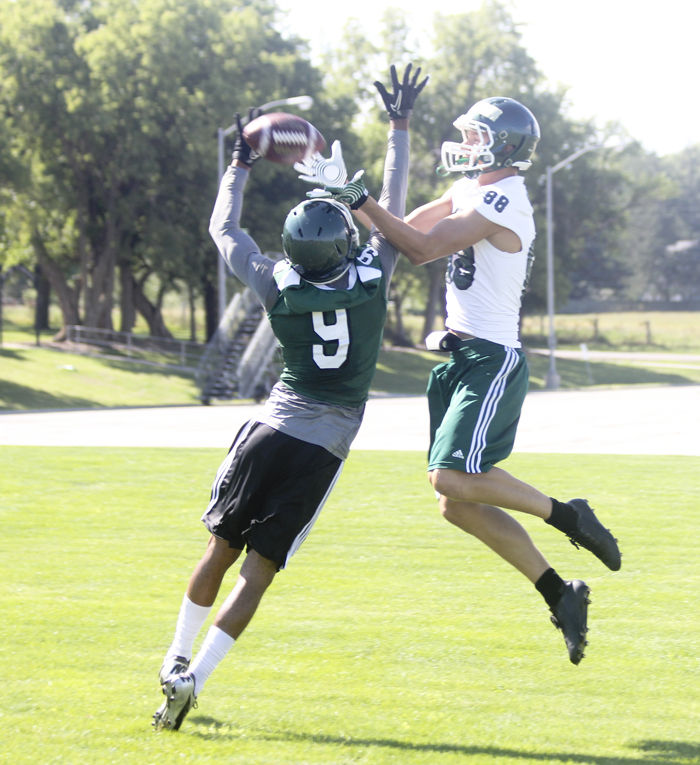 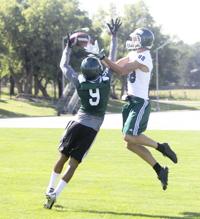 Northwest then-wide receiver Simon Mathiesen, right, battles with defensive back Marcus Jones during a 7-on-7 drill at the Bearcats’ first practice of the fall in 2014.

Northwest then-wide receiver Simon Mathiesen, right, battles with defensive back Marcus Jones during a 7-on-7 drill at the Bearcats’ first practice of the fall in 2014.

Northwest Missouri State prides itself of drawing athletes from its footprint and the local four-state area of Missouri, Iowa, Nebraska and Kansas.

Way outside of the area is an understatement with the big 6-foot-4 wide receiver that Adam Dorrel added to the roster straight out of the Copenhagen Business School in Denmark. Simon Mathiesen found his way from the capital city in Denmark to rural Missouri and the Bearcats anyway.

“I spent a lot of time contacting schools and sending out my highlight tape,” Mathiesen said. “Keep in mind, at that point I was a receiver, not a kicker. A.D. (Dorrel) got back to me and he said, ‘Hey, we kinda like what we see on film. We can’t give you a scholarship, but we will let you walk-on.’

“… It was definitely far from home. I did not expect to end up in small-town Missouri, but it was a good choice for sure.”

The Danish freshman said the transition to Maryville was surprisingly easy.

“You would assume that it might be a little tough to get adjusted moving from the other side of the world, but it was super easy for me,” Mathiesen said. “I didn’t even think about it because everyone was so welcoming and I just felt right at home there.”

Of course, Mathiesen wouldn’t be a wide receiver for long at Northwest as players like Reuben Thomas, Clint Utter and Bryce Young were in the way of Mathiesen earning playing time there.

The Bearcats were in need of a kicker though and Dorrel approached Mathiesen about giving that spot a shot given his soccer background.

“I got to be honest, I was not a fan at first,” Mathiesen said while laughing. “So it was halfway through my freshman year in 2013 and 10 minutes before the game against Washburn, I was told I had to kick. So that was fine.

“They kept having me kick during my freshman year, and I wasn’t getting any playing time at receiver anyway so I was completely fine with that.”

“Then the following spring, they said, ‘Hey Simon, we are thinking about moving you to kicker full time.’ I was very much against that idea. They still let me play receiver, but then I was kind of struggling and had some injuries and stuff. A.D. called me into his office and said that I basically didn’t have a choice,” Mathiesen said laughing again. “I was like, ‘Yeah I think it’s better that I become kicker full time.’ I was against it at first, but I realized that was by far that was the way I could contribute most to the team.”

The move work as he finished the year out as the team’s kicker, and went 10-for-10 on field goal attempts and made all 35 of his extra points. The team won its fourth national title.

The following year was a bit of a setback for he and the team as he hit just 8-of-12 field goals and missed three extra points. The Bearcats lost in the first round of the playoffs.

“In 2014, I went in with the mindset that kicking footballs are easy, then I only made 66 percent of my kicks,” Mathiesen said.

Mathiesen’s junior year was about redemption for himself and the Bearcats. The road wasn’t easy four the Bearcats though and a Week 4 home contest against Central Oklahoma proved to be just that.

“That year was the first year we went in as — everything is relative, but compared to Northwest standards, we were underdogs that year,” Mathiesen said. “I don’t think that many people expected that much from us. There were such high expectations for 2014 and obviously we disappointed that year, losing in the first round of the playoffs.

I remember in our preseason meeting, A.D. goes ‘Yeah, on paper, we are a 7-4 team,’ or something. I think he wanted us to get that underdog mentality a little. We were on such a high note the previous year, thinking we were about to walk back into Kansas City for the championship. I think the mentality in 2015 was way different than 2014, which I think was for the better.”

Following a comeback victory over Central Missouri the week prior, the winless Bronchos were supposed to be a breather in the MIAA gauntlet, but a young UCO squad had other ideas.

The Bronchos took a 7-0 lead midway through the first quarter.

Northwest came back with a 10-play drive, but in want became a theme for the day, the offense wasn’t able to punch it in. Luckily for Northwest, they had Danish kicker and he got them on the board with three points.

Special teams made a big impact on the next drive too as Northwest forces a Broncho punt. Eddie Richey blocked the punt, then scooped the ball and took it into the end zone for a 10-7 lead.

“It is always kind of overlooked to some extent,” Mathiesen said of special teams. “I think teams that really place an emphasis on it, usually tend to get an advantage.

“… I think Northwest always did a good job placing emphasis on the special teams, and that was probably one of the games where we came through the most.”

The second quarter saw the Bronchos pick up a pair offend goals of their own to take a 13-10 lead into halftime.

In the third quarter, Northwest safety Jack Young intercepted a pass which he took back to the four-yard line. Brady Bolles needed just one play to give Northwest back the lead with a rushing touchdown.

Central Oklahoma got back within 17-16 with a field goal to end the third quarter, but the fourth belonged to the Bearcat defense and Mathiesen.

Mathiesen connected on field goals on the first two drives of the quarter and the Northwest defense stopped the final UCO drive with sacks by Jacob Vollstedt followed by Nicholas Turner and Bobby Gruenloh combining for one.

“Great teams, we get things done even if it isn’t always super convenient, and I think that kind of set the tone for the rest of the season,” Mathieson said. “We had a ton of games that were complete walkovers, but that game and the UCM game, those were the two toughest challenges we had in the regular season at least.”

That would be the last game within 14 points the Bearcats would play in 2015 as they would roll to another national championship.

“I think it came down to having that different mentality that year,” Mathiesen said. “Hey, we aren’t getting anything served to us. We shouldn’t think we are as good as we are.’ We took that underdog mentality and that took us a long way that year.”

Mathiesen was named the MIAA Special Teams Player of the Year after setting the single-season record for field goals.

The next year was even better for Mathiesen as he earning second team All-American status and helped Northwest earn its third national title in his four years.

Since graduating, Mathiesen has kept close tabs on the Bearcats and currently lives with two former teammates — George Sehl and Kyle Goodburn.

Mathiesen has also stayed involved in the game as he helps lead the football department at Trackman. Trackman — a Danish company — is best known for its work with golf, but the company works with kickers too, giving them statistics like ball speed, hang time, apex height and distance.

“I contacted them about doing Trackman for kicking,” Mathiesen said on starting with Trackman. “They do it in golf and baseball and there are a lot of similarities between golf and kicking especially. I told them they should think about doing that.”

Kansas City Chiefs kicker Harrison Butker is one of the NFL players who uses the technology. It is also featured on NBC’s Sunday Night Football broadcasts to show, among other things, how far field goal attempts would have been good from.

“We are kind of turning into a practice product,” Mathiesen said. “So now I’m dealing with all of our relationships with NFL teams.”