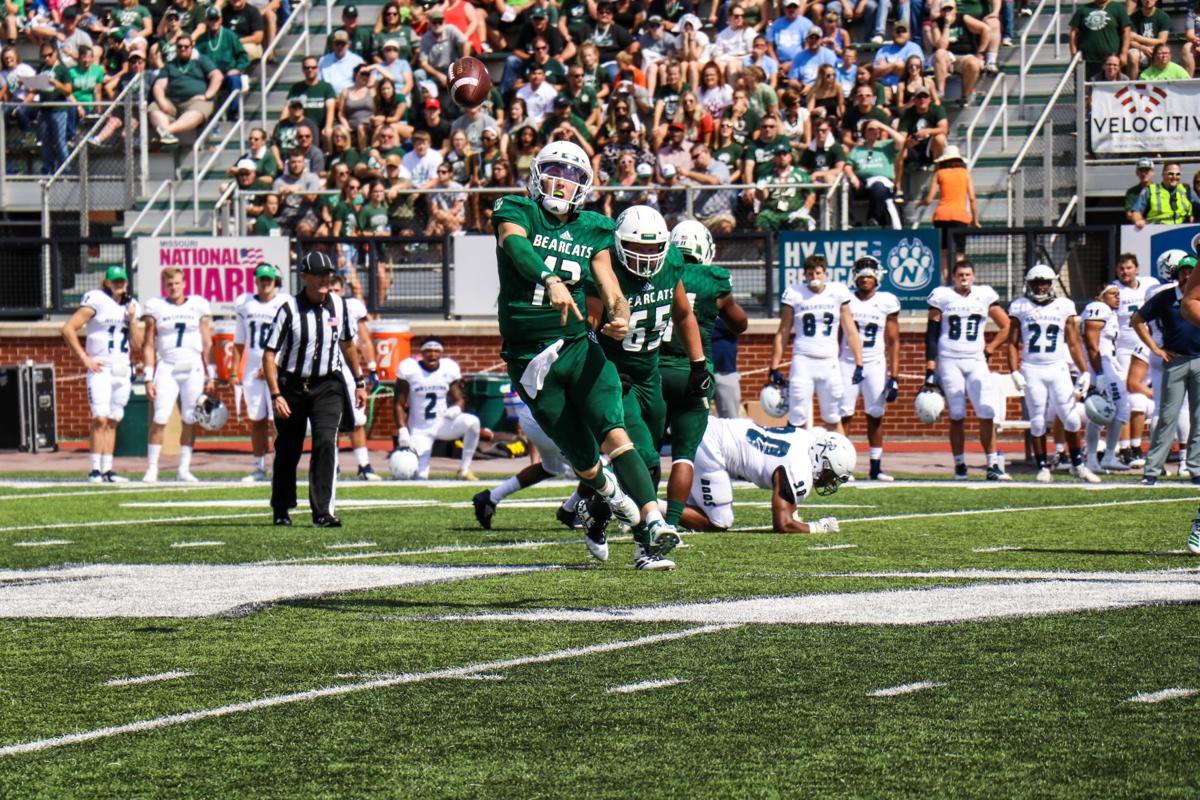 Sophomore quarterback Braden Wright throws a pass during the second quarter of Northwest's home opener against Washburn on Saturday. 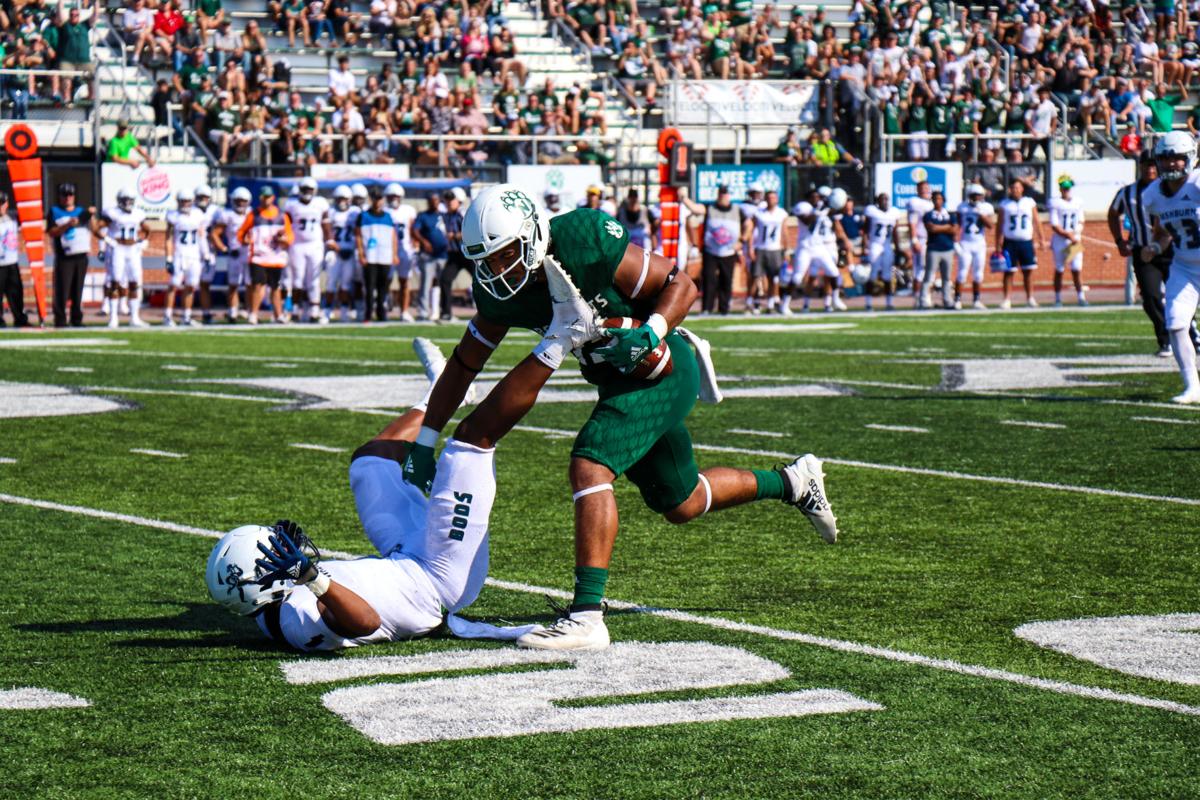 Senior tight end Marquis Andrews stiff arms a defender to the ground after catching a pass in Northwest's 38-17 win over Washburn at Bearcat Stadium. 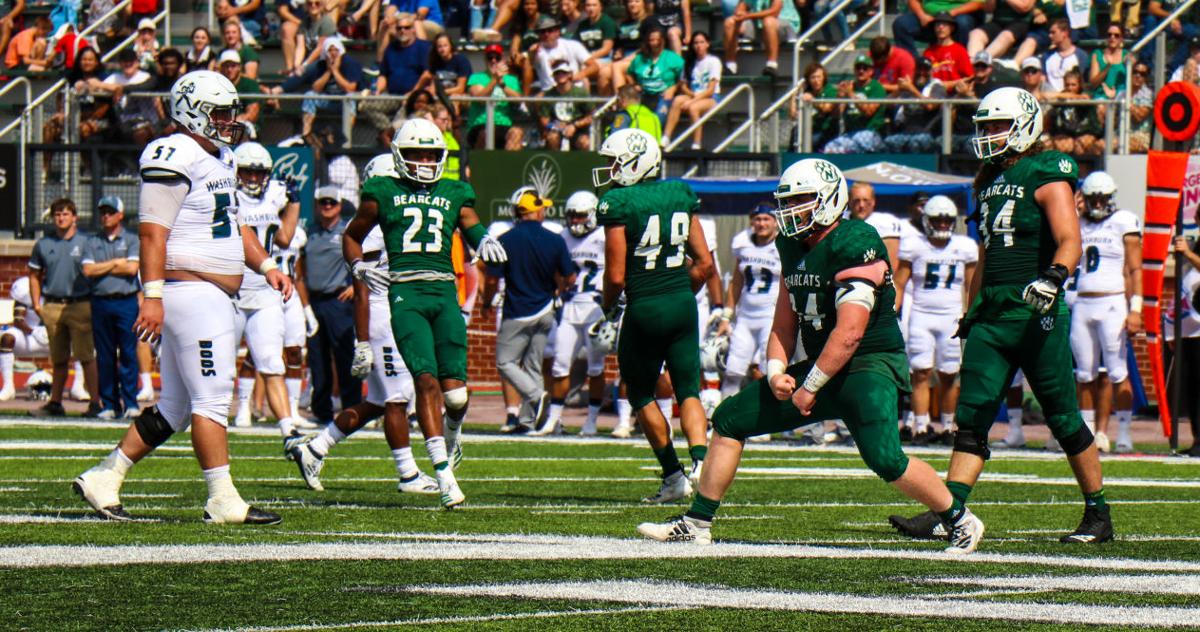 Sophomore Zach Howard celebrates after sacking the Washburn quarterback in the first half of the Bearcats' home opener. 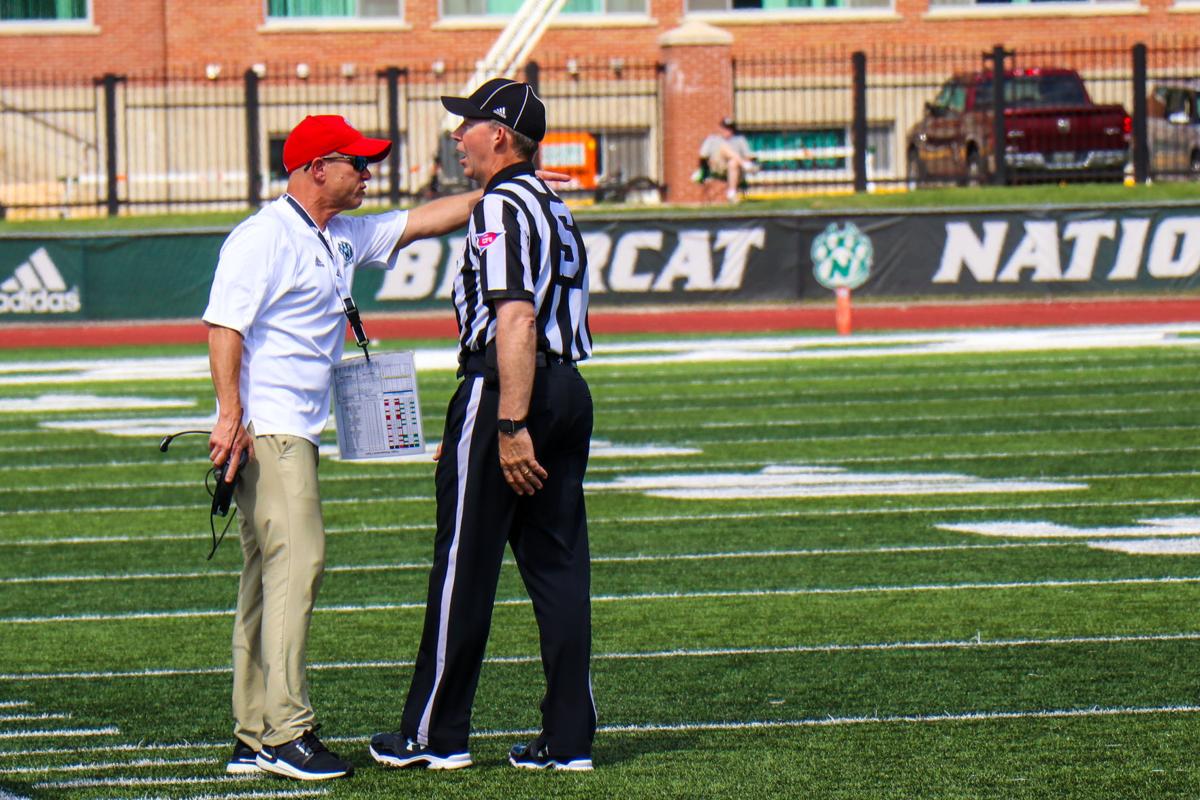 Northwest coach Rich Wright yells at an official after a call he disagreed with. Wright and company were penalized six times for 49 yards.

Sophomore quarterback Braden Wright throws a pass during the second quarter of Northwest's home opener against Washburn on Saturday.

Senior tight end Marquis Andrews stiff arms a defender to the ground after catching a pass in Northwest's 38-17 win over Washburn at Bearcat Stadium.

Sophomore Zach Howard celebrates after sacking the Washburn quarterback in the first half of the Bearcats' home opener.

Northwest coach Rich Wright yells at an official after a call he disagreed with. Wright and company were penalized six times for 49 yards.

MARYVILLE, Mo. — With uncertainty looming over Bearcat Stadium at the halftime intermission, the Northwest Missouri State football team was able to clear the air with its second-half performance.

Things were much closer in the first half of action than the final score denotes as the Bearcats’ offense turned the ball over on it’s first drive of the game and went into the halftime break with 199 yards of total offense and a tie score.

Although the Bearcats’ offense wasn’t firing on all cylinders in the first half, coach Rich Wright said alterations to the gameplan aided their production

“I felt like we played much better in the second half,” Rich Wright said. “We were really able to get the offense going. We made some adjustments and I thought Braden (Wright) threw the ball extremely well in the second half.”

The defensive unit didn’t help out the sluggish offense. The traditionally stout Northwest defense allowed the Ichabods to gain 238 yards of total offense in the first half while conceding 8-of-10 third-down conversions.

“I didn’t like the way we started the football game,” Rich Wright said. “We’re still making too many mistakes on defense. … We’ve just got to get better with our backups right now. It is what it is and we’re not going to make excuses about it.”

Northwest’s secondary still proves to be a weak spot for the Cats as senior safety Jake Gassman was still held out of the game with a hamstring injury he sustained last week. Senior Chama Pierre started the game, but only played the opening series. Rich Wright said he thought Pierre was rushed and wasn’t “100 percent.”

Sophomore cornerbacks J’Ravien Anderson, Trey Washington and senior cornerback Jerrell Green all got significant playing time in the secondary filling the vacancies left by the injuries. Junior Drew Dostal and sophomore Blake Bayer also rotated at safety for the Bearcats.

The Northwest defense was able to force two turnovers in the game. With sophomore Sam Phillips’ fumble recovery and Anderson’s interception, the Bearcats extended their streak of games with at least two turnovers to 10 consecutive games.

Sophomore quarterback Braden Wright followed up his less than stellar performance against Missouri Western with 325 all-purpose yards and accounted for three touchdowns. Braden Wright also was 20-for-29 and had a career-high 278 passing yards after his 8-for-18 game in Week 1.

“Once he got his rhythm I thought he executed really well,” Rich Wright said. “Even a couple of the balls that were incompletions or drops they weren't bad throws. For the most part, he threw some pretty good balls.”

Once again the Bearcats were led on the ground by Justin Rankin who had 93 yards on 17 carries and found the endzone twice. Rankin accounted for 102 yards of Northwest’s 458 total yards. The Bearcats’ quarterback was the second leading rusher for Northwest as he ran for 47 yards and a score on six carries.

“I thought (the run game) was good but it could have been a lot better,” Rankin said. “Obviously we started off slow so we went to the passing game and I thought all the receivers stepped up big time. They were making plays that … I haven’t seen them make plays like that. They stepped up.”

Northwest was able to distance itself from Washburn with big plays on both sides of the ball including a 41-yard touchdown run from Rankin.

“It was really just a mentality thing,” Rankin said. “We didn’t really change any schemes up. We ran the same plays like, ‘we got to go, it’s a whole other half of football, it’s zero, zero, let's go.’”

In the second half, Northwest’s defense only allowed Washburn to gain 112 total yards and held them to three third-down conversions on eight opportunities.

“We did a much better job of getting ourselves off the field (in the second half),” Rich Wright said. “We were able to corral the punter on a miscue on the snap and we did some things and created some shorter porches for the offense and obviously they took advantage.”

After beating the Ichabods for the 15th straight year, The Bearcats now turn their focus to Missouri Southern for a rare 6 p.m. kickoff Sept. 21 in Joplin, Missouri.

“You don’t get style points for winning,” Rich Wright said. “I’m tired of worrying about what everyone else thinks. I’m just going to do everything I can to have this football team learn, grow and develop.”

“Nobody remembers what Week 2 was off the 2016 team,” Rich Wright said. “… They remember the outcome.”

MARYVILLE, Mo. — Following a Week 2 performance where Northwest Missouri State football held Washburn to three points in the second half, the …