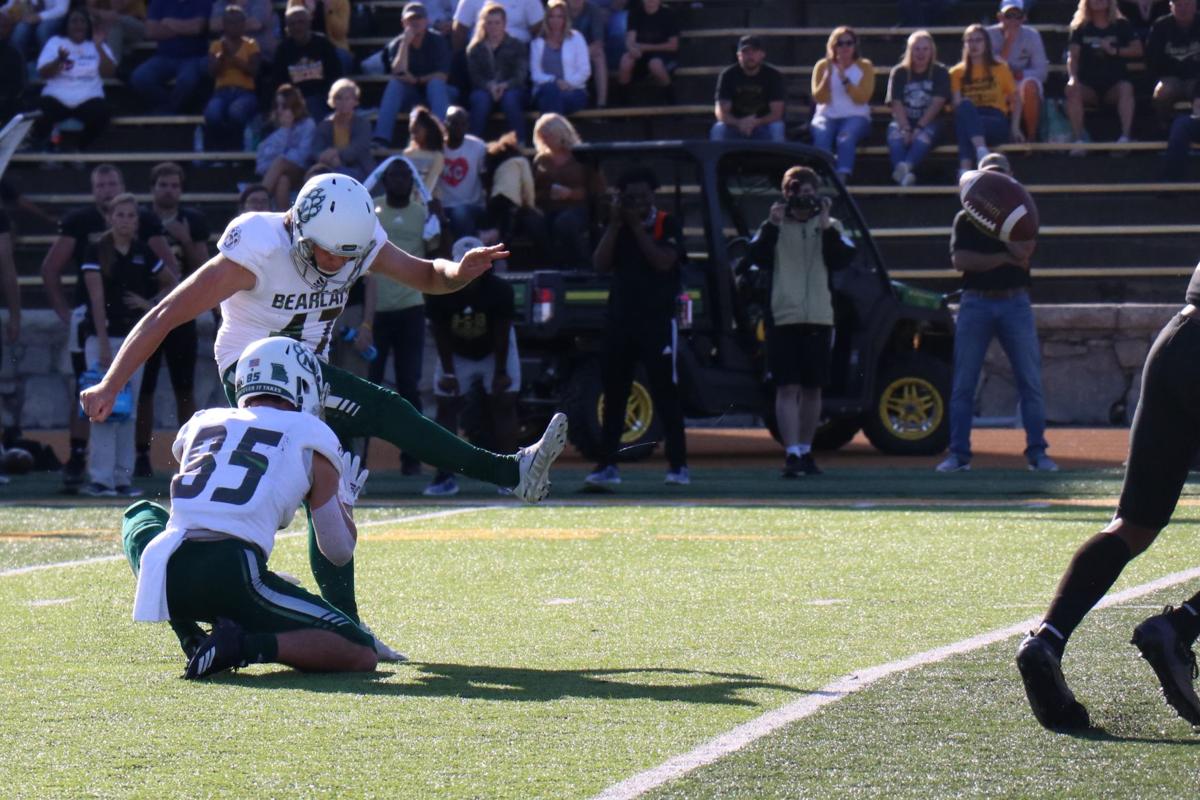 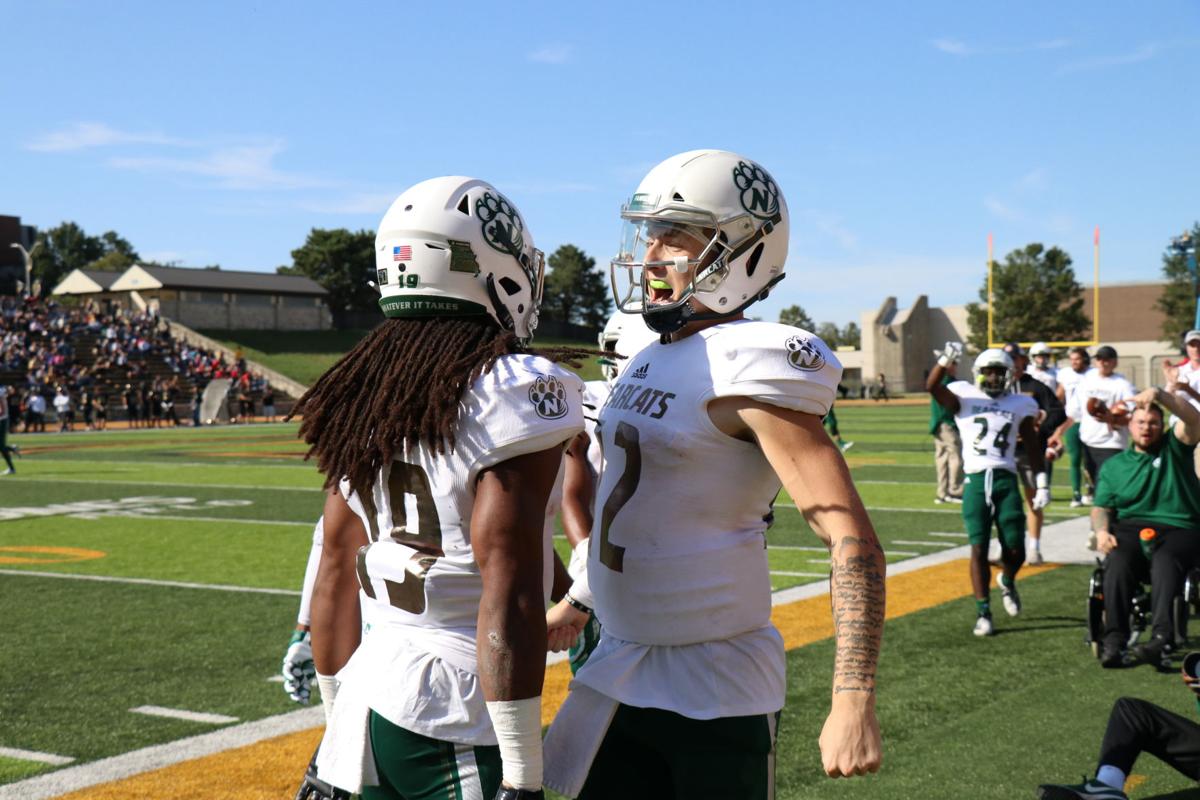 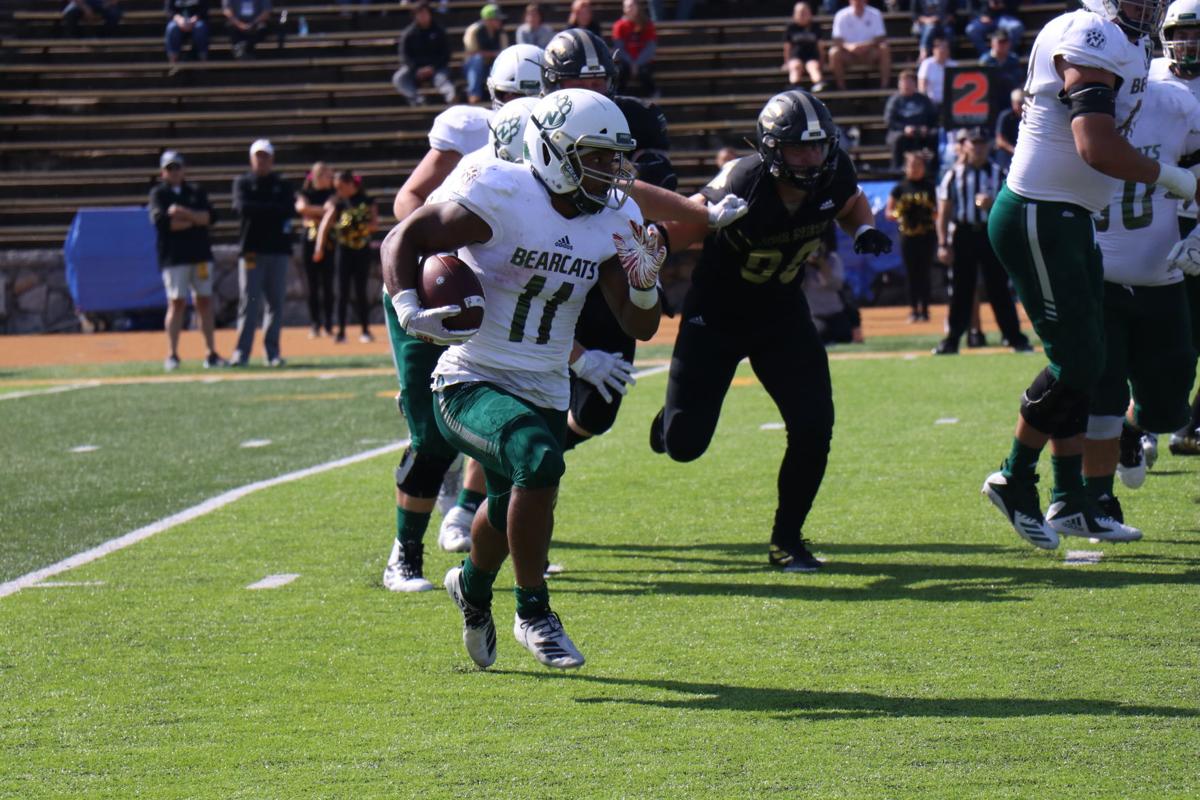 Although the Kansas City, Missouri, native nailed a career-long 53-yard field goal and added three more from 41, 35 and 27 yards to prove to be the difference in Northwest’s win, Saturday’s game was more meaningful than career highs. Last Saturday, Sampson said he lost his half brother, James, due to a tragic accident.

“I don’t want to get emotional, but I think he was with me today,” Sampson said about his performance.

Sampson took the field with, “FLY HIGH JAY BIRD,” and “Jay 6/18/74 Young King,” inscribed on the instep of both cleats.

“I’ve been going through a lot with my family the last week,” Sampson said. “The best thing for me was to come back and be with my teammates. I wouldn’t rather be anywhere else and I’m thankful I have them.”

“He was with me today,” Sampson said about his half brother. “I’m at a loss for words right now.”

The Bearcats had just taken a 25-23 lead with 7:06 left in the third quarter and after the defense forced a three-and-out from the Hornets, Northwest drove down to the field but stalled out on the Emporia State 35 yard line.

Coach Rich Wright trotted Sampson out to attempt the 53 yarder, after missing two 51-yard field goals earlier this year, to extend the Bearcats' lead to five.

“I had faith in him,” Rich Wright said. “He’s been through a lot this week so it was just nice to see him have some success today.”

Northwest faced some adversity early in the game as they allowed the Hornets to score in five plays. The Cats were never fully able to dig themselves out of the hole they made in the first half as they took a deficit into the halftime intermission for the first time this season.

“I just challenged them,” Rich Wright said. “I just said ‘This is not to our standard. You can’t do anything about what we did in the first 30 minutes but you darn sure can do something about what we do in the next 30.’ I felt like they responded today.”

It only took two plays before sophomore quarterback Braden Wright found junior Imoni Donadelle for a 57-yard touchdown pass to give the Bearcats their first lead of the day.

“The defense clearly knows what’s coming (when I come into the game,” Hohensee said. “They’ll point out it’s a run, but our O-line does a great job creating holes. There were a few times where (Emporia State) knew where it was going and loaded the box but our O-line just created a huge seam for me so that was great.”

The St. Charles, Illinois, native accounted for two touchdowns while Braden Wright threw for 87 passing yards and a score on 6-for-20 passing.

Northwest’s defense continued its string of dominant performances against the run game, allowing 58 rushing yards to the Hornets. The Bearcats dropped their season average of rushing yards allowed per attempt to 2.2.

Sophomore Blake Bayer led the way in tackles for the Cats Saturday as he recorded 10 total tackles in the game, making his season total of 39 a team-best.

After Emporia’s jolting start, Rich Wright and company switched from four defensive linemen to three to mix up coverages in the secondary and give Emporia State looks they hadn’t seen.

The Bearcats now turn their attention to Pittsburg State, who beat Lincoln 56-14. Northwest will be the home team on the scoreboard but the game will be played at Arrowhead Stadium.

“No, I wasn’t (pleased with the game),” Rich Wright said. “I had higher expectations for our football team today. We will get after it in practice this week. Was that straight forward enough? I’m as subtle as a trainwreck.”