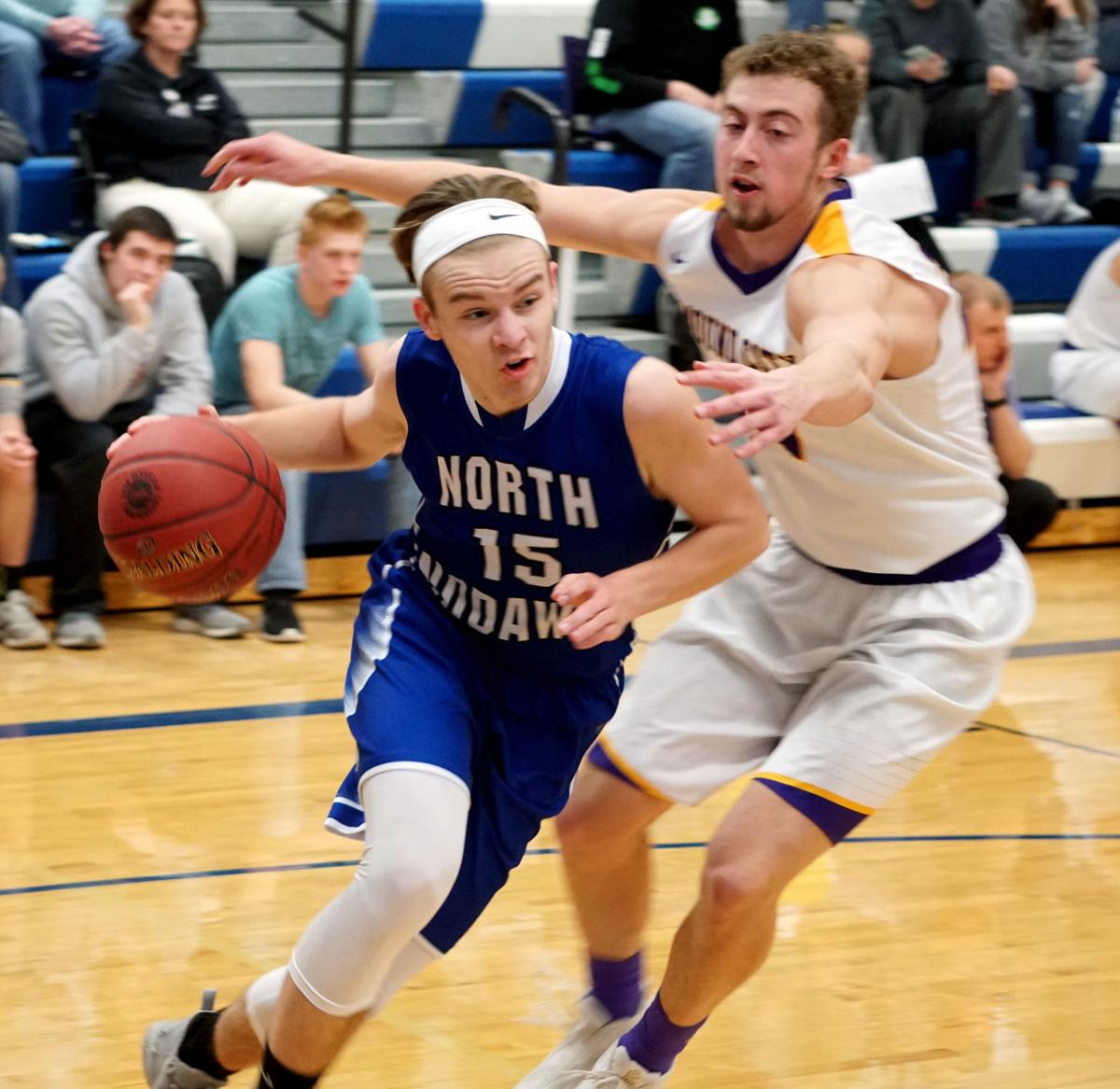 North Nodaway senior Cole Bird drives to the basket against Mound City on Wednesday in Ravenwood. 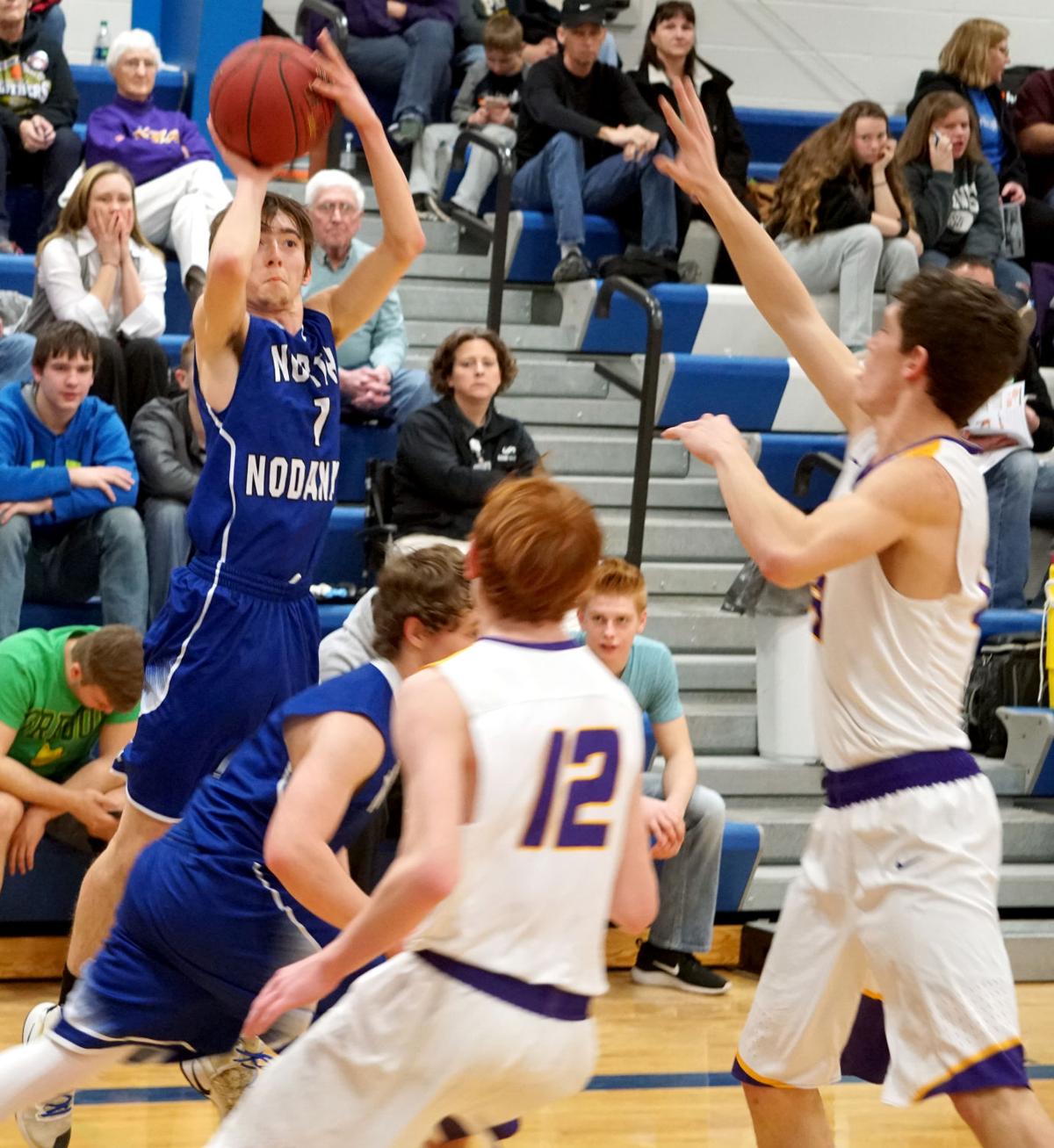 North Nodaway senior Cole Bird drives to the basket against Mound City on Wednesday in Ravenwood.

The seventh-seeded Mustangs were already facing a size disadvantage inside against the second-seeded Panthers, but that was added to with leading-scorer Arron Coleman unable to play.

“Mound City is a tough team and there is a reason they are a two seed in our district,” North Nodaway coach Jake Shipman said. “They are a very disciplined team and very athletic. One of those has to give for us to be in a game like that.”

Mound City attacked that size advantage time and time again and as the first quarter ticked down, the Panthers fed 6-foot-2 sophomore T.J. Hopkins for a basket inside to push the early lead to 12-3.

Mound City continued to attack the Mustangs with a combination of size and aggressiveness on fast breaks. After a basket by junior Matthew Poppa the lead was 20-6 midway through the second quarter.

“All the credit goes to Mound City,” Shipman said. “They just played that well of a defensive trap. We have to do a better job taking care of the ball. I thought the game was close given all the turnovers we had and the shots we weren’t getting to fall.”

North Nodaway sophomore Tyler Bix and senior Cole Bird each had two points late in the quarter to cut the halftime lead to 22-10.

“Scoring 10 points in a half is tough,” Shipman said. “You aren’t going to beat anybody if you are doing that.”

North Nodaway continued to play solid defense in the third quarter and held Mound City to just nine points in the quarter, but they struggled to find any momentum offensively. The Mustangs scored just five points in the third and went into the fourth trailing 31-15.

Mustang guard Cody Wood opened the fourth quarter with a three-point play and pulled his squad to within 13 points. The Panthers wouldn’t allow the Mustangs to get any closer and answered with a 13-3 run to seal the game.

Bird led the Mustang offense with seven points while Bix and Wood each had six. Ryan Riley and Austin Bird each added three.

Wednesday was the last game for seniors Cole Bird and Lucas Alvarez.

“They have meant a lot to the program and they’ve meant a lot to me too,” Shipman said. “Cole is the first kid that I’ve had for four years. The kid has come leaps and bounds from where he started and that is all a credit to him. He wanted be a good player and he put in the time and effort to improve. As far as Lucas, I was just glad he went out. I wanted to give him a good experience as a foreign-exchange student. … I got to know him as a person and he is a really good kid.”

While the Mustangs will have to replace Cole Bird at forward, they return four starters next season and Shipman is opportunistic about the team’s future.

Mound City will advance to play a semifinal game against Rock Port on Friday night with the winner playing the winner of Northeast Nodaway and Jefferson for the district title on Saturday in Ravenwood.