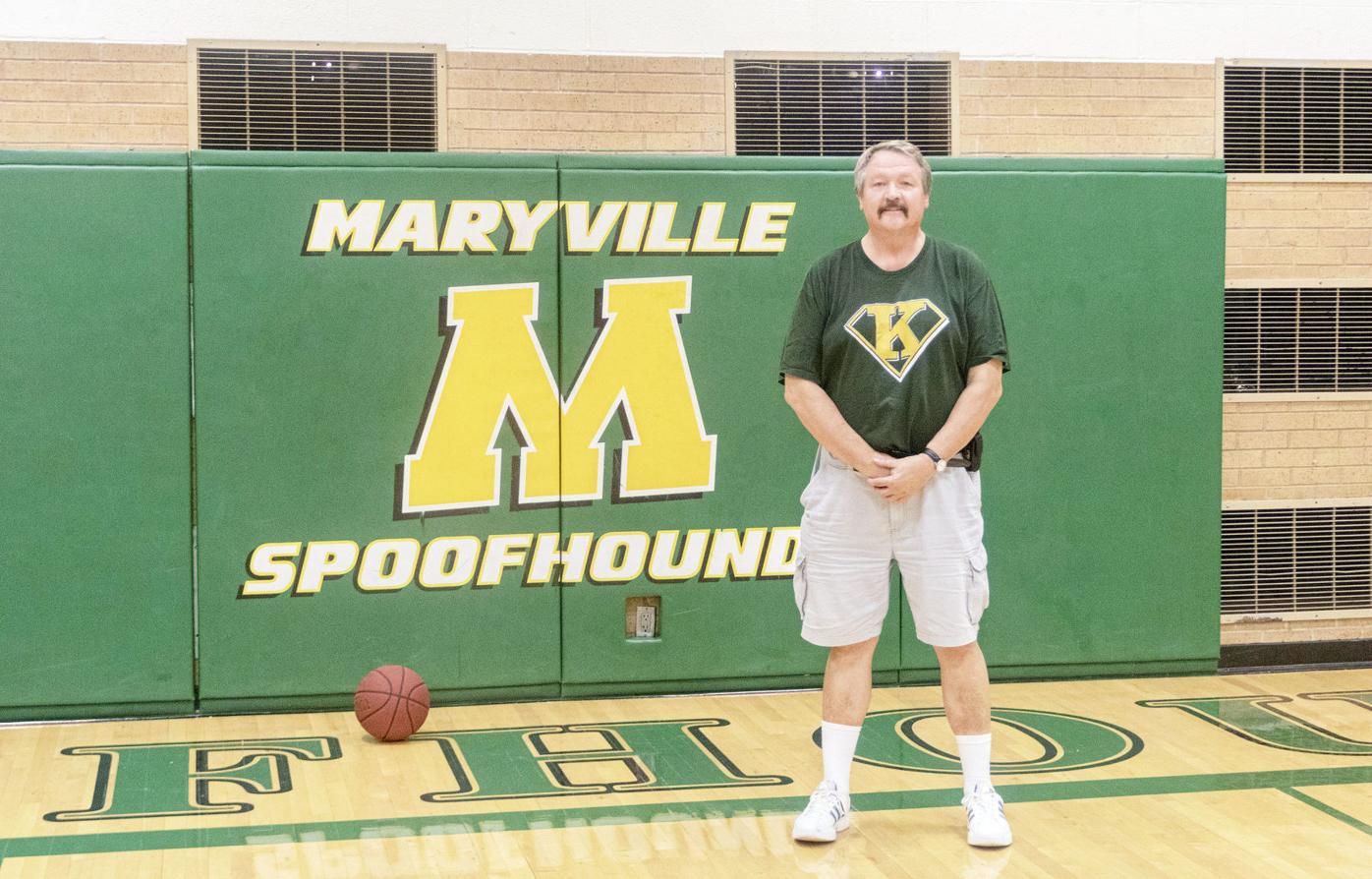 Former Maryville High School basketball head coach Mike Kuwitzky is shown in the gym he knew so well. Known simply as “Coach K,” he has retired from the school district after teaching 34 years, due to concerns about the COVID-19 pandemic. 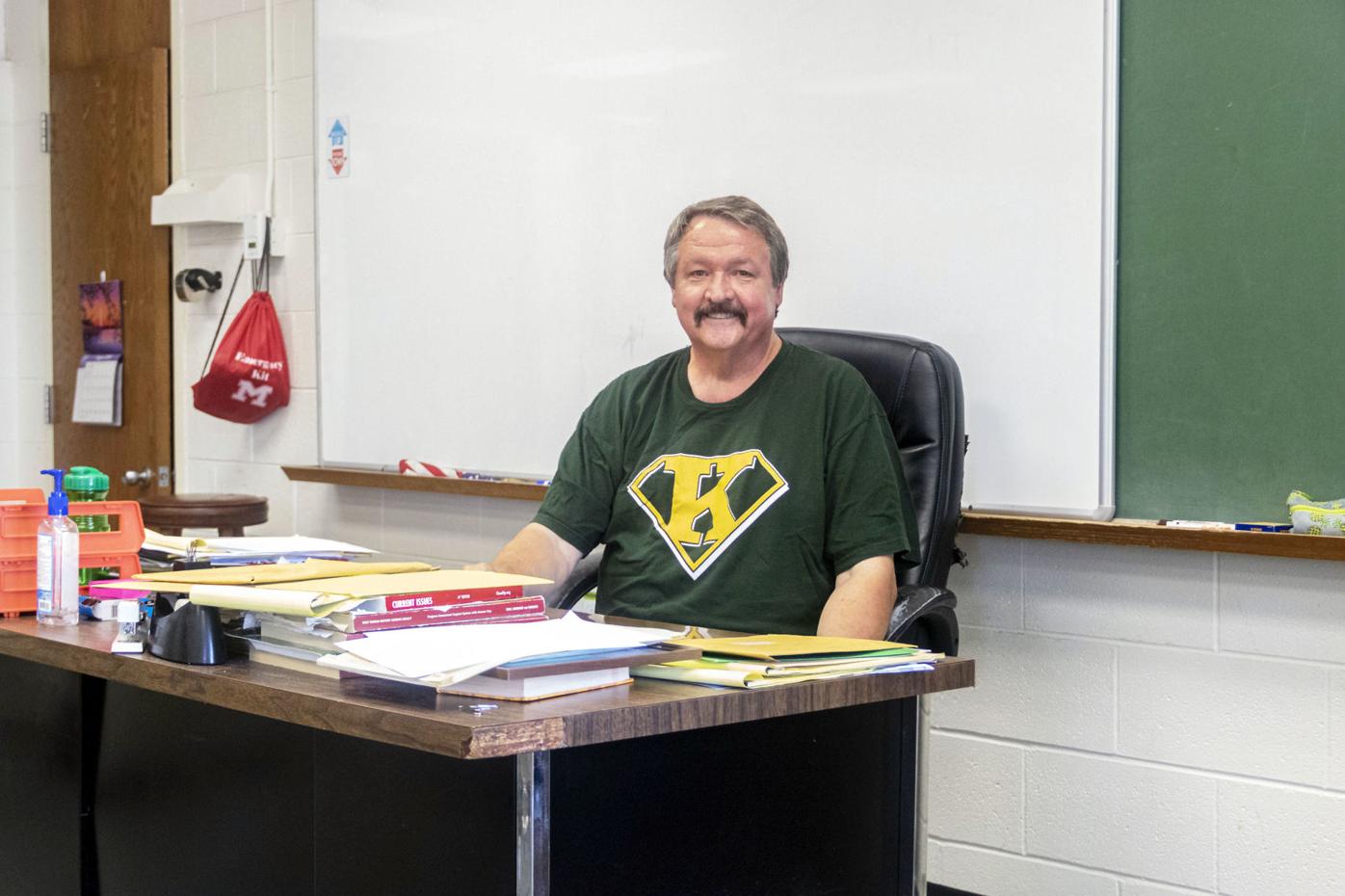 Now retired social studies teacher and former Maryville High School basketball coach Mike Kuwitzky is shown at his desk with a white board installed over his classroom chalkboard. High school principal Thom Alvarez didn’t want to fully replace the chalkboard “Coach K” fought to keep during his 34 years at the school.

Former Maryville High School basketball head coach Mike Kuwitzky is shown in the gym he knew so well. Known simply as “Coach K,” he has retired from the school district after teaching 34 years, due to concerns about the COVID-19 pandemic.

Now retired social studies teacher and former Maryville High School basketball coach Mike Kuwitzky is shown at his desk with a white board installed over his classroom chalkboard. High school principal Thom Alvarez didn’t want to fully replace the chalkboard “Coach K” fought to keep during his 34 years at the school.

MARYVILLE, Mo. — He had spent the last 34 years adding trophies, plaques and presidential portraits to the walls and shelves of his cramped social studies classroom at the end of an upstairs hallway at Maryville High School, and four months ago, Mike Kuwitzky figured he had at least a few more years to curate the museum of sorts that defined his classroom walls.

His room — which he thinks was first designed for drama classes, on account of the miniature stage that greets entrants near the door — had come to be a time capsule, yet one Kuwitzky kept updated. There were civil war posters and a photo of John F. Kennedy. There was a chalkboard he kept from being replaced by the school’s administration. And there were trophies his basketball team had won through his 28 years at the helm of the Maryville boys basketball team.

Much of the decor that lined Kuwitzky’s walls were relics of years past — including the trophies. Kuwitzky, who most students have simply called “Coach K” for the last three decades, stopped racking up mementos from his teams’ accomplishments on the hardwood in 2014, when a difference in philosophies between the coach and then-administrators forced Kuwitzky to step away from the game he coached at the high school level for 35 years.

Back in his classroom, though, the trophies are missing, and so are the shelves they once sat on. His trademark chalkboard — the one Kuwitzky insisted on keeping as the rest of the academic world moved on — has been replaced by a marker board.

The posters and portraits that once lined the wall are all gone, and before long, Kuwitzky, 65, will be too. For the second time in six years, he’s being sequestered from a passion and forced into retirement, this time by the COVID-19 pandemic that has taken the lives of more than 120,000 Americans, and now, the career of at least one Maryville man.

“I didn’t want to. I was gonna go another year or two, to be honest with you — maybe even five,” Kuwitzky said, sitting in the commons at Maryville High School on June 27 as he described the energy he still has for teaching hampered by the realities of his current situation. The longtime coach has a number of pre-existing conditions, further compounded by his age, that make him high-risk in the era of the coronavirus.

“I’ve been hearing over and over, talking with doctors, listening to doctors, and they say, ‘You know, if you’re in those high-risk categories, you might want to hold off going back to teaching right away,’” Kuwitzky said. “And, you know, I had to really think about that.”

And so Kuwitzky, who has taught history in parts of six decades after first starting in fall of 1979, is entering retirement earlier than he wanted to, and earlier than Maryville administrators wanted him to.

Maryville High School Principal Thom Alvarez was just starting out as a social studies teacher at the school in the early 2000s when he first met Kuwitzky, who he, like so many students, refers to almost exclusively as Coach K. The coach served as a mentor to the future administrator, who now has to find a way to replace a teacher no one wanted to lose.

Alvarez said he thinks the staff at Maryville High School might have as hard of a time adjusting to a school day without Kuwitzky as the students will, with Kuwitzky’s passion for teaching and his dedication to the school now forced to stay at home. The idea of moving on, to Alvarez, is hard to fathom. He said he couldn’t bring himself to get rid of the chalkboard at the front of Kuwitzky’s classroom — the last one of its kind at the school. Instead, Alvarez had the newly-installed whiteboard placed over the top of it.

“It’s really difficult,” Alvarez said. “Coach K’s dedicated his life to Maryville. Thirty-plus years in one district is almost unheard of, and so, for him to go out on any other terms than the ones that he wanted to — it’s hard.”

After paying his way through school at the University of Nebraska-Lincoln and starting his teaching and coaching career at a high school in Beatrice, Nebraska, Kuwitzky found his way to Maryville in the late 80s with the same. He went to college to be a teacher, he emphasized, not to be a coach. He still has a passion for both.

In the realm of basketball in Maryville, Kuwitzky’s impact was both immediate and lasting. He led the Spoofhounds to an 18-9 record in his first year at the helm of the program and had a winning record 23 times in his 28 seasons, including a stretch of 18-consecutive winning seasons from 1989 to 2005.

Over the course of nearly three decades, the coach led the Spoofhounds to five sectional championships and three Final Four appearances, while winning the MEC Coach of the Year award six times. He never won a state championship, something he said still disappointments him, but only mildly these days.

Even without a state title, Kuwitzky’s tenure was the kind that rallied a community, the kind that turned the phrase “Spoofhound Defense” into a proper noun around Maryville in the mid-2000s. Under Kuwitzky, it was the Spoofhound Defense that led the team to a 25-7 record in 2004 and got the phrase plastered on the back of T-shirts made to honor the coach that same year.

As the booster club sold T-shirts with a “K” on the front and the team’s calling card on the back, the Spoofhounds made a run to sectionals and the boosters presented Kuwitzky with a shirt of his own late that season. Nearly two decades later, the coach nearly teared up recalling the moment.

And perhaps that’s why Kuwitzky took it so hard when he was forced out of the program in 2014 by administrators he would eventually outlast at the school. He still had a lot to give.

“I wasn’t ready to retire altogether,” Kuwitzky said, though he said the forced retirement then served as a blessing of sorts. It meant no more late nights watching film followed by early morning classes. It allowed Kuwitzky to focus more on his health. And it gave the coach time to pour himself into teaching, no longer splitting time between the classroom and the basketball court.

And perhaps that’s what makes this forced retirement — his second in six years — as hard as the first. Kuwitzky never married, instead spending parts of six decades devoted to his craft. He said the students and staff he’s worked alongside at Maryville High School have been his family for the past 34 years.

Now, Kuwitzky is walking away, or perhaps more accurately, being dragged out by the threat of COVID-19. He plans to return to the district as a substitute when a vaccine for the virus is discovered and the threat to his life subsides, and Alvarez said the district will have a spot for the former coach whenever that day comes.

Until then, Kuwitzky is intent on enjoying the socially-distanced retirement he didn’t choose to enter, hunkered down in Maryville, waiting on the day he can return to the school he never planned on leaving.