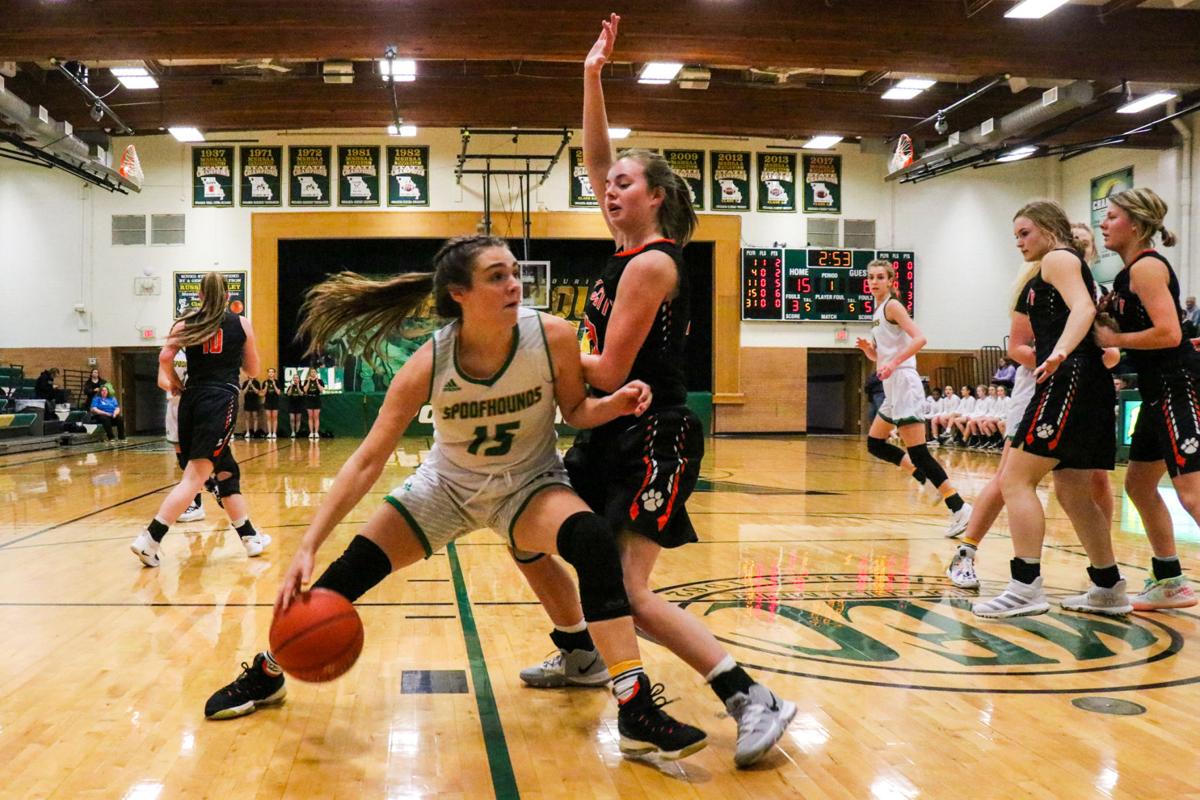 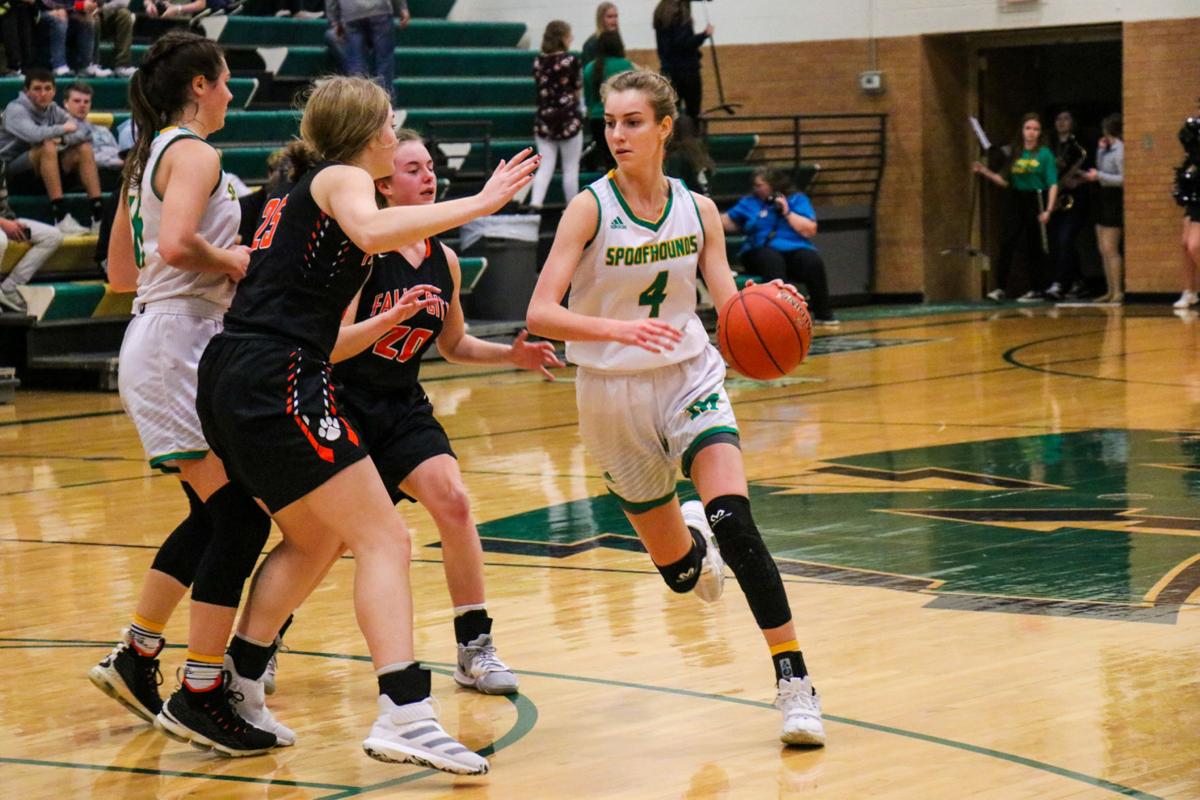 Junior guard Serena Sundell dribbles off of a screen in Maryville's 66-35 win over Falls City Thursday. 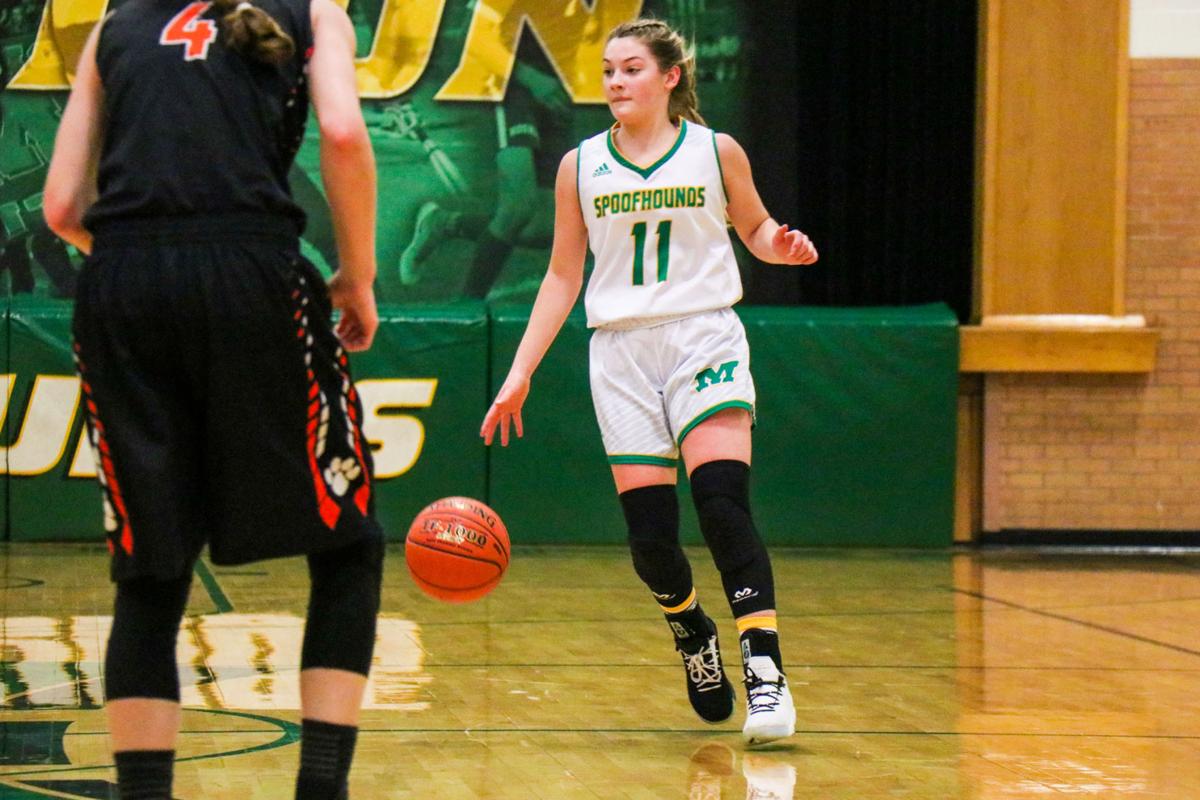 Junior guard Serena Sundell dribbles off of a screen in Maryville's 66-35 win over Falls City Thursday.

MARYVILLE, Mo. — The Maryville High School girls basketball team was able to breeze past visiting Falls City with a 66-35 victory for its 12th win of the season Thursday.

Unlike in their past couple of games, the Spoofhounds (12-2, 2-0 MEC) were able to get their offense going early as shots were falling for the home team.

Despite garnering a win against Lafayette, Maryville struggled to get shots to go in the bucket and the trend continued on Jan. 14 when the Hounds hosted East Buchanan. Head coach Quentin Albrecht said the biggest difference in his team’s two games this week was the effort level.

Albrecht also added seeing shots fall early and having things go right for the Hounds helped his team build faith in themselves and each other.

“Obviously when the ball starts going in the basket you gain some confidence,” Albrecht said. “In our last game, I think we lost a little bit of confidence but I think that goes back to controlling what you can control. Sometimes the ball just doesn’t go into the basket but down on the defensive end, you can control your effort.”

Maryville jumped out to an 11-0 run and a quick 27-10 lead thanks to its freshman duo of guard Anastyn Pettlon and forward Rylee Vierthaler.

The pair combined for 17 points and junior guard Serena Sundell joined the two freshmen in the double-digits club, while maintaining a 45-20 lead at the half.

“Rylee’s performance doesn’t surprise me,” Albrecht said. “(Wednesday night) our practice got over at 4:45 p.m. and at 6:15 p.m. I told her and Anastyn to go home. … I rarely kick kids out of the gym but I’ve got to kick her out of the gym sometimes.”

Vierthaler continued her dominance in the second half as she accumulated the majority of her points in the paint.

The freshman had nine points in the third quarter and only two in the fourth but finished with a game-high 23 points as the reserves took over for the starters to close out the game.

“It feels good,” Vierthaler said of her breakout performance. “It was my teammates that got me open and my coaches had good plays set up to give me those open shots.”

Sundell tallied her 10th game with at least 20 points this season, as she scored 20, while Pettlon added 10.

Maryville had eight players score at least one point. With just under three minutes left in the game, the Hounds went up by 30 and initiated a running clock.

Albrecht said having a successful game following a disappointing one is “really important.”

“The (East Buchanan) game kind of shook our confidence a little bit,” Albrecht said. “When you have a performance as we did against East Buch and things don’t go your way the next game becomes really important. I thought we bounced back really well.”

The Spoofhounds will wrap up their three-game homestand at 7 p.m. Tuesday as they host Penney High of Hamilton.