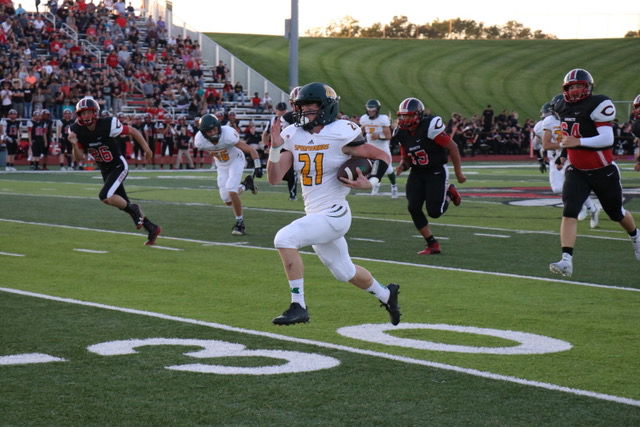 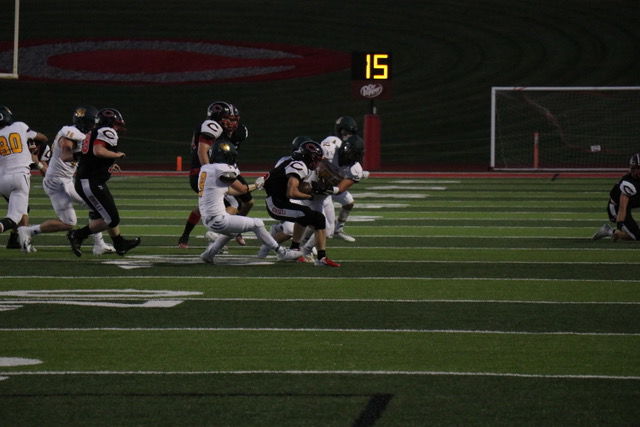 Senior linebacker Quinn Collins and a pack of Spoofhounds surround a Chillicothe ball carrier during the Spoofhounds’ 49-12 win over Chillicothe at Jerry Litton Memorial Stadium Friday. 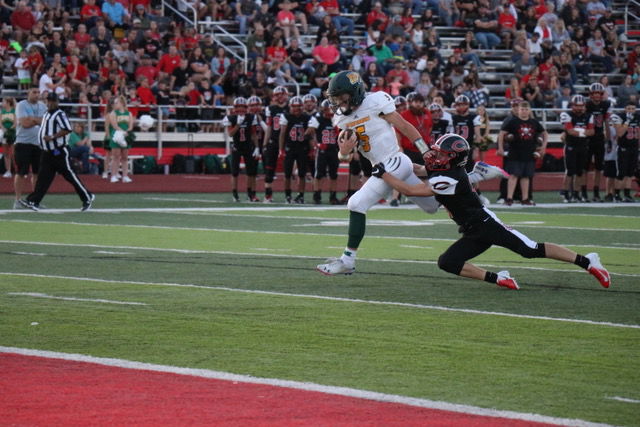 Junior running back Trey Houchin attempts to shake off a Chillicothe defender during a long run in the second quarter of the Spoofhounds’ 49-12 win over the Hornets at Jerry Litton Memorial Stadium Friday.

Senior linebacker Quinn Collins and a pack of Spoofhounds surround a Chillicothe ball carrier during the Spoofhounds’ 49-12 win over Chillicothe at Jerry Litton Memorial Stadium Friday.

Junior running back Trey Houchin attempts to shake off a Chillicothe defender during a long run in the second quarter of the Spoofhounds’ 49-12 win over the Hornets at Jerry Litton Memorial Stadium Friday.

CHILLICOTHE, Mo. — After playing its last three games on the road, the Maryville High School football team capped off its tour Friday with a controlling win against Chillicothe 49-12.

The Spoofhounds (2-1, 1-0 MEC) were able to put points on the board early and often against the Hornets (2-1, 0-1 MEC) as they cruised to their second straight victory.

Even in the waning moments of the Hounds’ dominating triumph over Chillicothe, coach Matt Webb sustained the same intensity with the second-string players as he did with the starters.

“It’s process football,” Webb said. “The scoreboard doesn’t really matter, it’s when you get an opportunity to play on the field you want to do your best. … We had some backups in and we still expect them to execute and expect them to do what the expectation is.”

Maryville kicked off the scoring with a 52-yard run from senior Aiden Cullin less than two minutes into the game.

Six minutes later junior Ben Walker found senior Tate Oglesby from 15 yards out for a pass in the back of the endzone to extend the Spoofhounds’ lead to 14.

Before the first quarter, Maryville pushed its lead to 21 with a 58-yard touchdown run from Trey Houchin.

“(Breaking big runs) feels pretty good,” Cullin said. “It’s pretty easy running behind that offensive line, those guys are studs. It’s nice having them and its good to hit my swing in Week 3 and I’m hoping to do more.”

With only 14 seconds remaining in the first half, junior Connor Weiss carved through the defense for a four-yard touchdown run. After a bobbled snap on the point after attempt, the Spoofhounds would take their 27 point advantage into the halftime intermission.

Maryville kicked off the second half but was able to recover the ball on the Chillicothe one-yard line after a Hornet miscue. One play later Walker punched the ball in and a two-point conversion from Oglesby increased the Spoofhounds’ lead to 35.

Chillicothe found the endzone for the first time on the next kickoff as senior Isaak Rasche returned the kickoff for a touchdown.

The Spoofhounds appropriated the ball well in the game. Maryville had six players score seven touchdowns on the night. Weiss was the only Hound to find the endzone twice. He said the team is the reason he was able to score multiple times.

“I mean (scoring twice) is always cool,” Weiss said. “It’s like a team effort, so I mean, I’m not really super excited because at the end of the day it’s not just a few people that help plays — it’s the whole team.”

Walker finished the game with 166 all-purpose yards and four touchdowns while completing 60% of his passes. Cullin led the way rushing for the Hounds with 109 followed buy Houchin with 104. Oglesby caught two passes for 53 yards and a touchdown to be the game’s leading receiver.

Since the second half in the Hounds’ defeat to Blair Oaks in Week 1, Maryville has outscored its opponents 119-32. Webb said his coaching staff deserves a majority of the credit for the success Maryville has been having recently.

“I can’t say enough … how proud I am of our coaching staff,” Webb said. “These guys know football inside and out. Beyond that, they are great people. We’re fortunate in Maryville to have kids that are coached by guys that know their Xs and Os and know how to coach football but know how to treat young men.”

After having its first three games and jamboree on the road, Maryville will now turn its attention to St. Pius who will be the first team in the Hound Pound this season.

The Spoofhounds are currently riding a 61-game winning streak at their home field.

“The focus was to start off 1-0 and understanding our schedule and realizing that next week we play St. Pius,” Webb said. “And that’s the only Class 2 team on our schedule until we get to districts. We play our cards right, the way the schedule looks, we have seven of the next eight football games will be played in Maryville.”