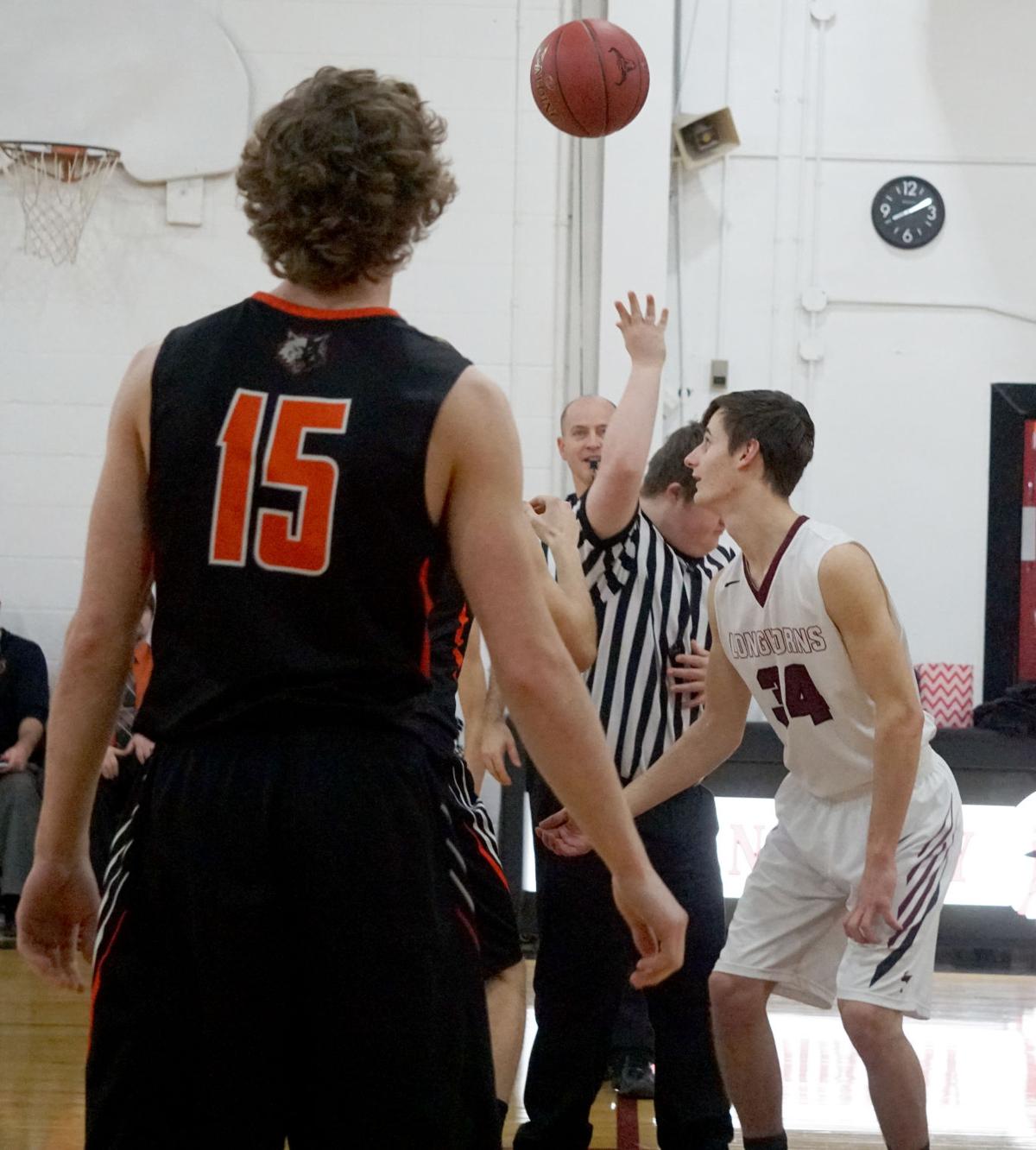 South Nodaway senior Cole Henggeler throws up the opening jump-ball against East Atchison on Friday in Barnard. Henggeler is a Special Olympian and someone coach Dustin Skoglund calls their "No. 1 fan." 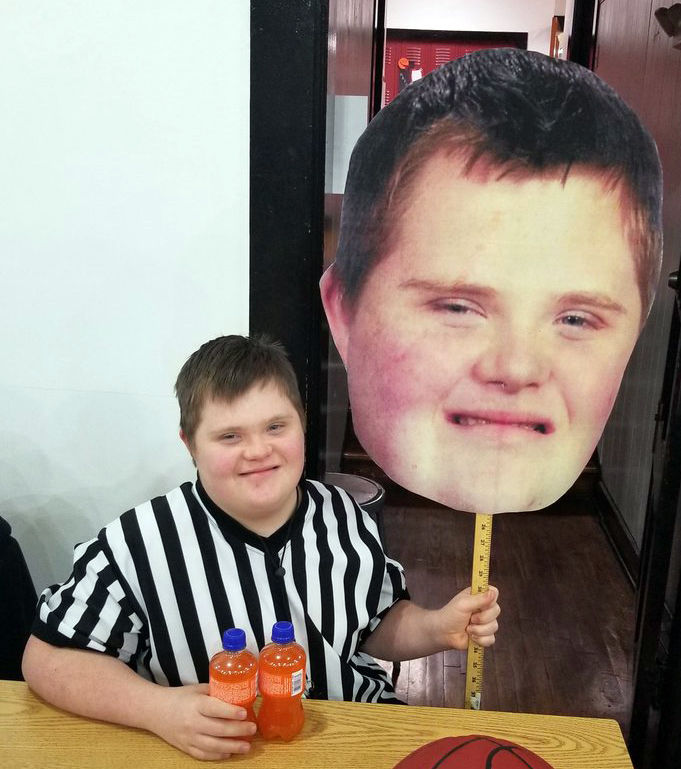 Cole Henggeler poses with his cutout following 'Senior Night' on Tuesday in Barnard.

South Nodaway senior Cole Henggeler throws up the opening jump-ball against East Atchison on Friday in Barnard. Henggeler is a Special Olympian and someone coach Dustin Skoglund calls their "No. 1 fan."

Cole Henggeler poses with his cutout following 'Senior Night' on Tuesday in Barnard.

BARNARD, Mo. — At a high school basketball game, it is rare to see someone wearing vertical back and white stripes get the biggest cheer of the night, but that was exactly what happened Tuesday in Barnard.

Cole Henggeler, a South Nodaway senior and Special Olympian, was among those honored during the ‘Senior Night’ against East Atchison. Henggeler sits at the scorers’ table during Longhorn home games wearing a referee’s shirt to cheer on his school. Longhorn coach Dustin Skoglund couldn’t be happier to have the team’s super-fan so close to his side.

“We love Cole and he sits on the bench with us on the road and at the scorers’ table at home games,” Skoglund said. “He is our No. 1 fan and he brings a positive attitude every time you see him. He is always smiling or giving you a high-five. He has drawn up some plays for me before. He just always brings that positive attitude.”

On Tuesday, Henggeler was able to join in the game even more as he tossed up the opening jump-ball for both the boys’ and girls’ games. Henggeler said afterwards that being able to do that and receive the cheers from the home crowd made him happy.

Unfortunately for the South Nodaway boys, that opening tip would prove to be the highlight in 65-48 loss to East Atchison.

The Wolves jumped out to a 30-5 lead midway through the second quarter and the Longhorns couldn’t establish any offense outside junior Taylar Freemyer, who had all five of the Longhorn points to that point.

“We really only have one player who has varsity experience before this year, just one guy,” Skoglund said referencing Freemyer. “In order to overcome that, we have to play really smart and really disciplined, but we weren’t able to do that early.”

In front of their home crowd, the Longhorns continued to fight and the Longhorns rattled off six-straight points — three from sophomore CJ Sipes, two from junior Clayton Walker and one from Freemyer — to climb back within 20 points.

For much of the second half it appeared the 30-point, running-clock rule could be triggered at any point, but the Longhorns continued to fight to stay within that margin. The Longhorns battled until the final buzzer and ended the game on a 9-2 run to get the margin down to 65-48.

“I’m proud of the way they fought in the second half,” Skoglund said. “We could have just rolled over and took it, but we didn’t. That is a good sign and sometime you can build on for the future.”

Freemyer led South Nodaway with 16 points and Walker joined him in double figures with 12 points. Senior Jordan Murphy scored seven in his final home game in a Longhorn uniform.

“Jordan is a kid who is a great example of a kid who has gone through the grind,” Skoglund said. “He struggled some early in his career and couldn’t find the minutes he wanted, but he is a great example of someone who stuck it out, was patient and trusted the process. Now, he is getting to play meaningful minutes in his senior year.”

“For Auston, this is really only his second year of basketball, but he has been an energy guy for us,” Skoglund said. “He brings a lot of enthusiasm and that is a quality that is important especially at our level.”

South Nodaway will wrap up its regular season on Thursday at Stewartsville before getting ready for district-play next week in Ravenwood. The Longhorns are the five-seed and will face Northeast Nodaway on Tuesday at 5:45 p.m.

“The rhetoric is going to be ‘finish’ and we have to finish,” Skoglund said. “Basketball, whether it is a good or a bad season, it can get to be a grind. … We want to finish. We’ve had some injuries and attrition. We’ve faced some difficulties this year, but we had pretty high expectations and even if we haven’t met those, we can finish strong and make a little noise down the stretch.”