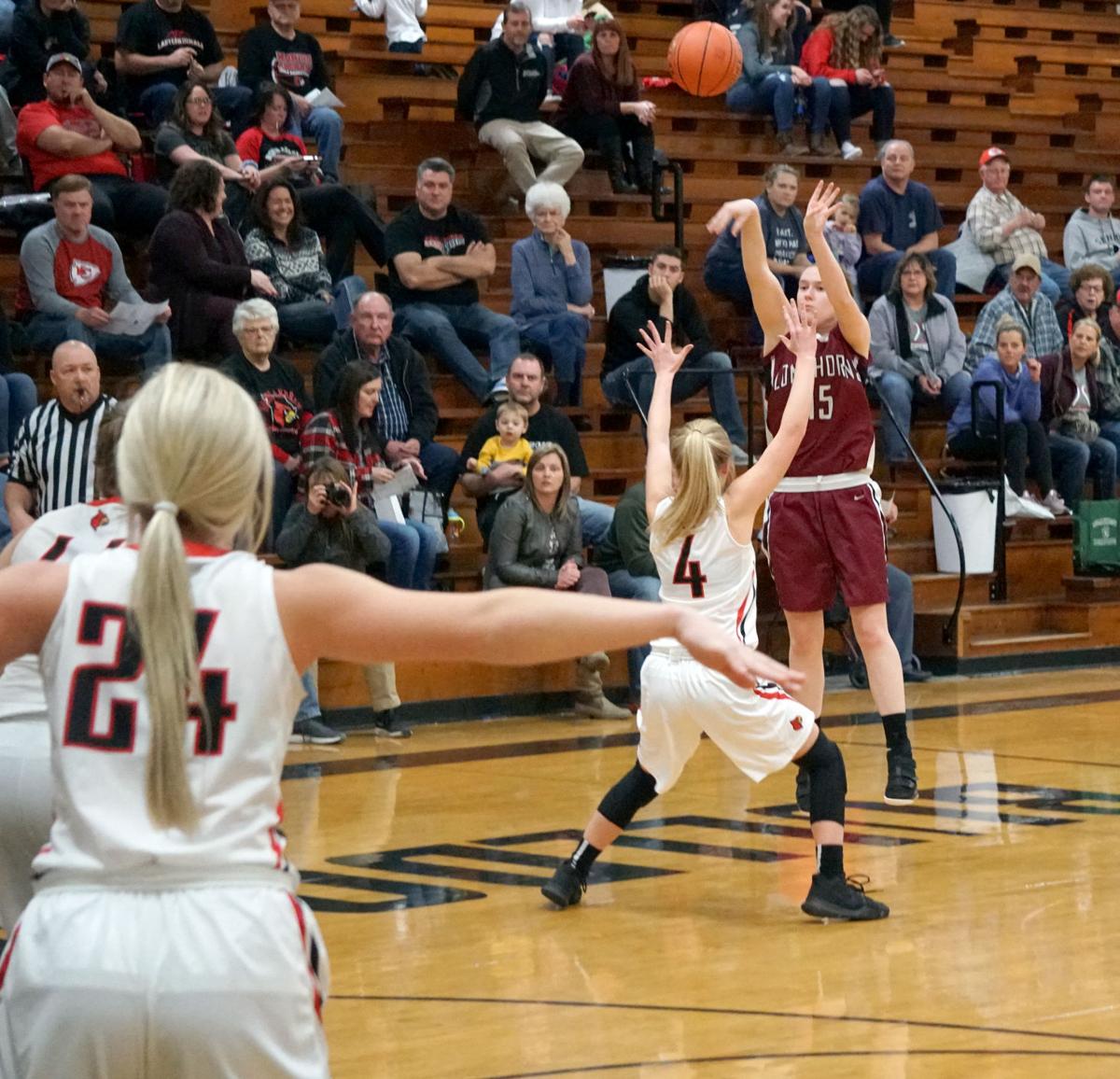 South Nodaway junior Kaylin LaMaster makes a deep three at the buzzer in the first quarter of Monday's game against North Andrew in the Stanberry Invitational. 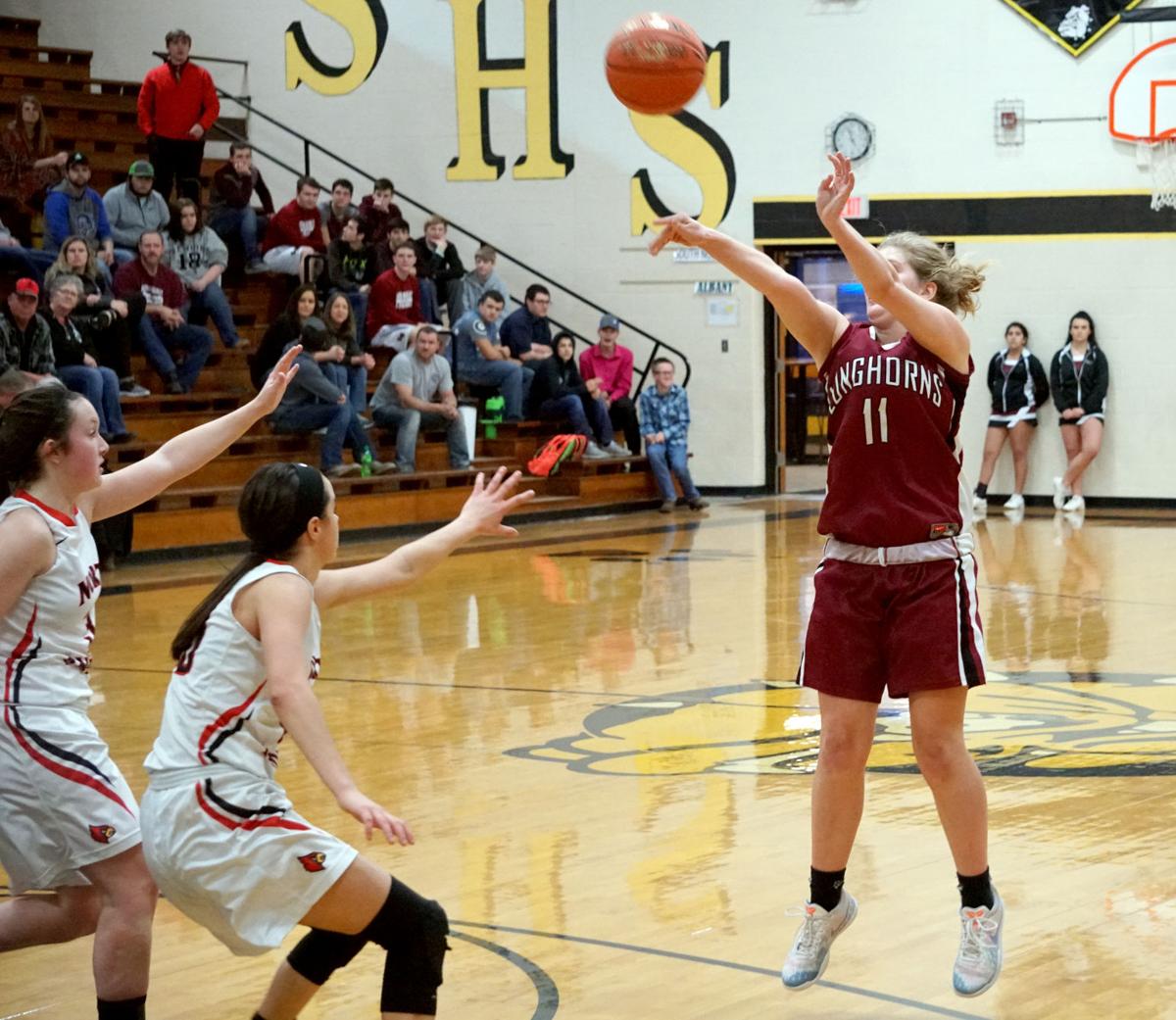 South Nodaway junior Eryn Kemper takes a jumper in the first half of Monday's game against North Andrew in the Stanberry Invitational.

South Nodaway junior Kaylin LaMaster makes a deep three at the buzzer in the first quarter of Monday's game against North Andrew in the Stanberry Invitational.

South Nodaway junior Eryn Kemper takes a jumper in the first half of Monday's game against North Andrew in the Stanberry Invitational.

STANBERRY, Mo. — The South Nodaway girls’ basketball team has a different look to it entering the second half of the season with junior guard Hannah Wilmes out of the lineup with a season-ending knee injury, but they showed on Monday that they are still able to compete on a high level even without her.

The sixth-seeded Longhorns gave the third-seeded North Andrew Cardinals all they could handle in the first round of the Stanberry Invitational, but the Cardinals were able to survive with a 40-32 victory.

“I liked how we were in the game, but until we can get all five players playing with the same amount of effort, we are going to lose close games,” South Nodaway coach Aaron Murphy said. “That is what we have been battling all year — to get all five to play equally as hard. That just isn’t happening yet. Momentum, the way the ball is going in or out — there are a lot of contributing factors, but the one thing we can control is our effort.”

Wilmes has been the Longhorns’ No. 2 scorer all season behind junior point guard Kaylin LaMaster; but without her, the team will be looking for other options to emerge and one of those options showed up early on to keep South Nodaway within striking distance.

“In sports, unfortunately, injuries happen, but it gives other girls the opportunity to come up and make the best of their opportunities,” Murphy said.

North Andrew jumped out to a 6-0 lead with senior Emily Cole scoring the game’s first six points, but Longhorn junior Eryn Kemper — who replaced Wilmes in the starting five — answered with a three to cut the lead in half. After Cole scored again, Kemper connected with another jumper to cut the lead to 8-5.

Without Wilmes, even more of the scoring burden will fall at the feet of LaMaster, but she proved capable in the early portions of the game. Her three-pointer tied the game 8-8 and then when the Cardinals went on an 7-0 run, LaMaster answered with back-to-back threes to end the first quarter, including a deep one to beat the buzzer.

Kemper stayed hot to open the second quarter and made another three to give the Longhorns their first lead of the game at 17-15. North Andrew answered quickly with a 5-0 spurt.

One of the Longhorns likely to be counted on to supply more offense without Wilmes is freshman Delanie Acklin, who found her stoke late in the half with four points, but a Jentry Copple three and two Cole free throws put the Cardinals up 25-21 at half.

“Watching the game, you know (Acklin) can do it,” Murphy said. “It just comes down to a confidence thing. … It is a confidence issue and she is a young player so hopefully she is getting more and more confident each game.”

LaMaster had a pair of foul shots to open the third quarter and Acklin answered an Alania Officer free throw with a bucket to pull within one point at 26-25.

That was as close as the Longhorns got as North Andrew put the game away with an 11-2 run to end the third quarter and begin the fourth.

The Longhorns only had three players crack the scoring column with LaMaster having 12 and Kemper and Acklin each having 10.

North Andrew was paced by Cole’s 20 points. The Cardinals will now prepare for a semifinal matchup with second-seeded Jefferson on Thursday at 4:30 p.m., while South Nodaway will play seventh-seeded Albany in Wednesday’s consolation semifinals at 4:30 p.m.