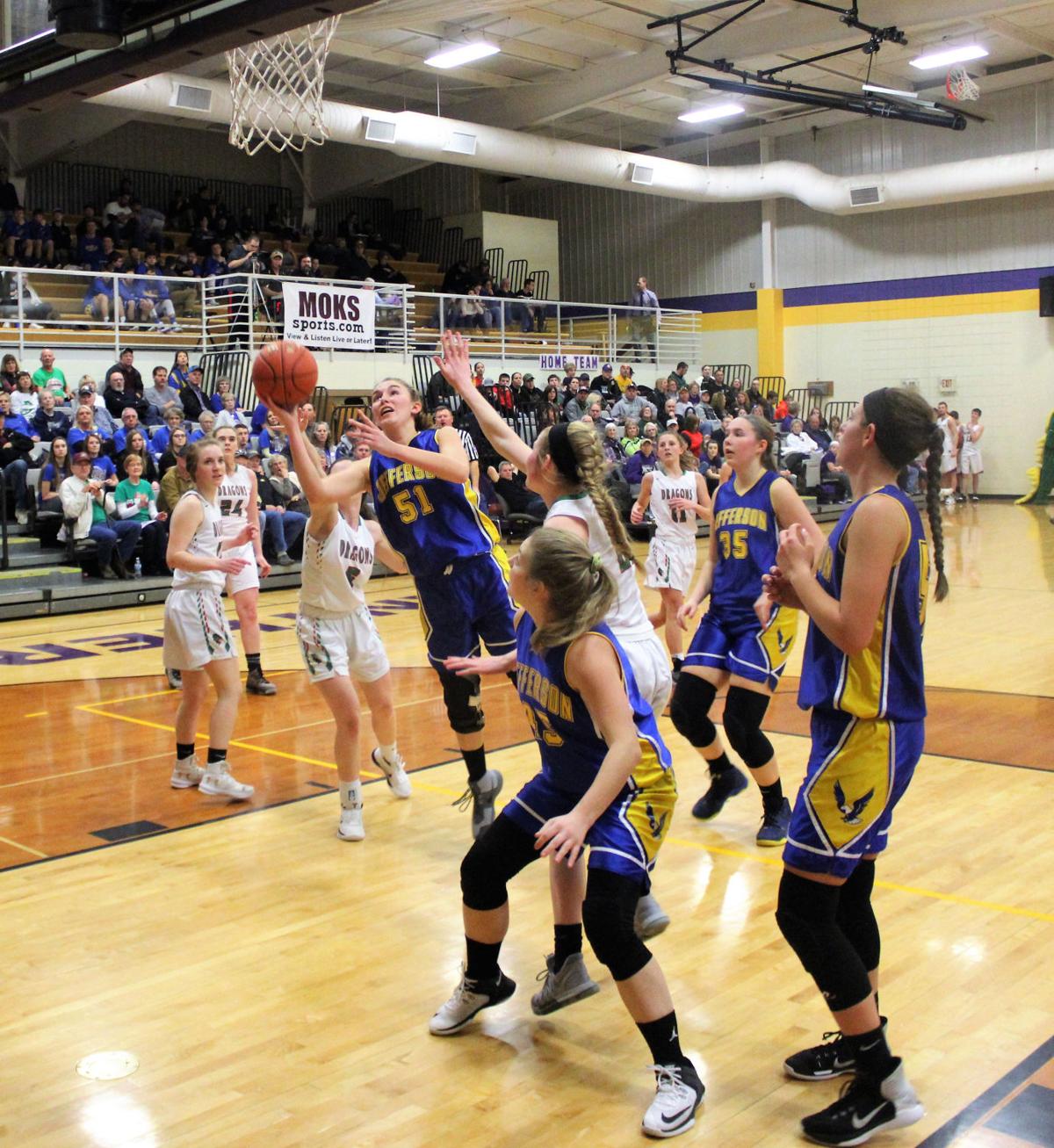 Jefferson's Vanessa Pappert fights through traffic to take a shot Saturday night in the North Platte Tournament. Pappert was second on the team with 14 points. 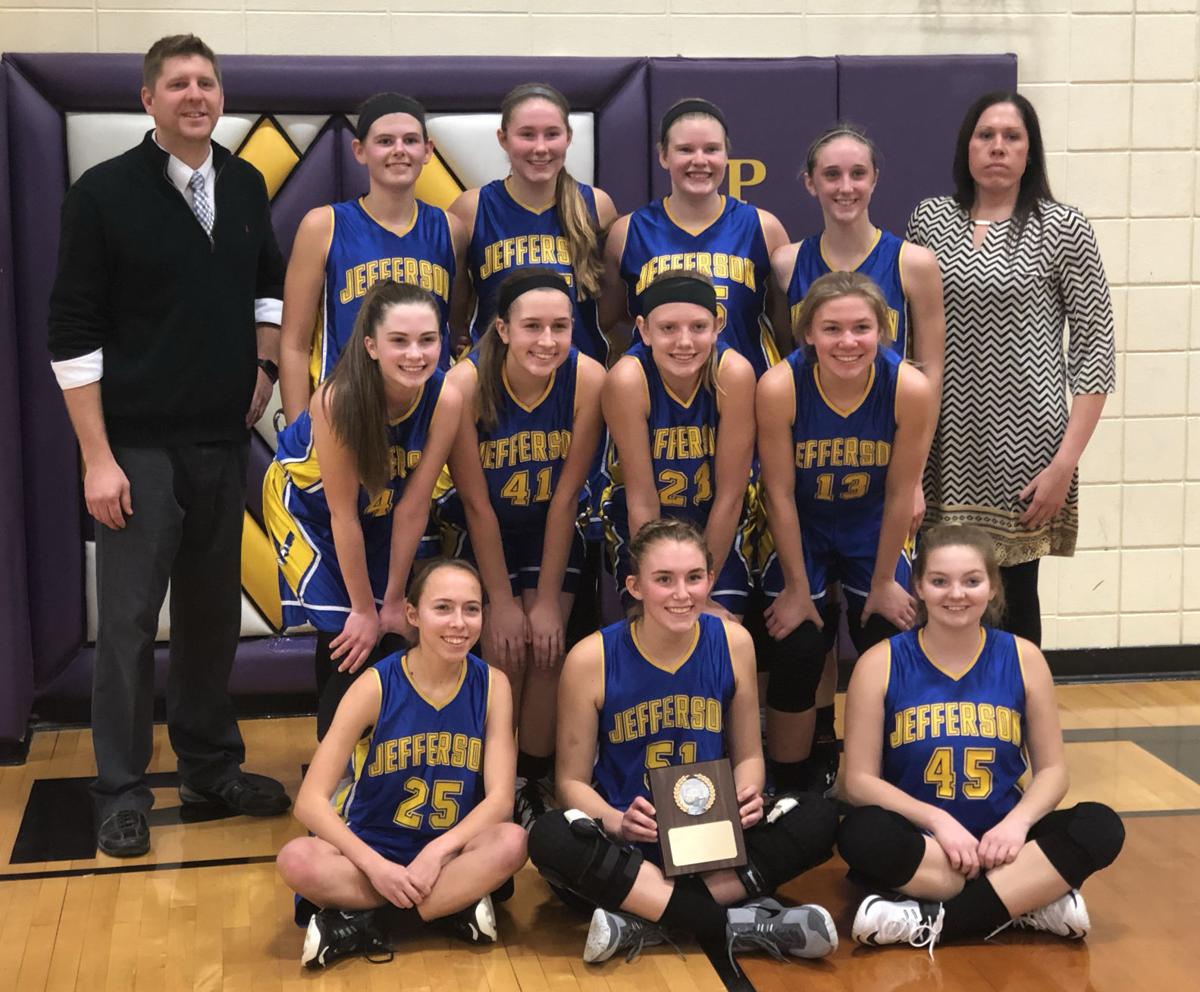 Jefferson won the North Platte Tournament on Saturday in Dearborn.

Jefferson's Vanessa Pappert fights through traffic to take a shot Saturday night in the North Platte Tournament. Pappert was second on the team with 14 points.

Jefferson won the North Platte Tournament on Saturday in Dearborn.

DEARBORN, Mo. — The Jefferson Eagles continued to play their best basketball of the season on Saturday afternoon in the North Platte Tournament. After defeating the two seed on Friday, the Eagles dominated the Mid-Buchanan Dragons, who came into the game ranked number eight in the state for Class 2, 58-29 in the championship game.

“This feels great, we came into this with a good mindset,” Jefferson sophomore Malia Collins said. “We came in knowing that we had to play hard and play our game to come out on top.”

The Eagles and Dragons traded baskets to start the first quarter, but Collins’ seven-straight points gave the Eagles a 9-3 lead halfway through the first. Mid-Buchanan quickly rallied to go on their own 7-0 run and take their first lead of the game.

After a Jefferson timeout, Collins connected on her second 3-pointer of the first quarter — giving the Eagles a 12-10 lead. Ashley Mattson kept the run going with back-to-back baskets to end the quarter. Collins finished with 10 points in the first quarter and 12 total. Collins was named tournament MVP one day after also winning the Missouri Young Farmers/Young Farm Wives State Speaking Competition.

“That tells you what kind of well-rounded person she is,” Eagles coach Tyler Pedersen said. “She drives to Columbia and then comes back and plays like she did today, it shows you what she is capable of.”

The Jefferson offense struggled to get going to start the second quarter, but that cold streak didn’t last long. Mid-Buchanan pulled within one at the six-minute mark but was unable to regain the lead. The Eagles’ offense ended the half with a 16-0 run to take a 34-17 lead into halftime.

“We played really well away from the ball and handled their pressure really well,” Pedersen said. “They really try to create turnovers and I thought our girls played under control and without a doubt the best we’ve played all season.”

Jefferson’s strong offensive performance continued into the second half with a 5-0 run to start the half as Vanessa Pappert scored four of the five points. Mid-Buchanan ended the run by making one of two free throws, but Mattson scored six of the game’s next eight points to stretch the Eagles’ lead to 29. The Dragons scored the final five points of the third quarter, but they were outscored by the Eagles 21-6 in the third quarter.

“We started something new tonight (defensively), we sent one girl up there to press and slow them down offensively,” Pappert said. “We just need to push them back so they had to slow down because the first time we played them in the beginning of the season (in the Mid-Buchanan Jamboree) they just ran and ran and we couldn’t keep up with them.”

The fourth quarter saw far less scoring as the Dragons struggled again to score any points on the Eagles’ defense. Mid-Buchanan scored just 12 second half points and the 29 points was a season-low. Jefferson held the Dragons to 28 points below their season average.

“We knew Mid-Buchanan wanted to play a fast game and we just need to slow things down and play at our pace,” Collins said.

The Eagles had three players finish with double digits: Collins 12, Mattson 16 and Pappert 14. Jefferson’s 58 points is the second most they’ve scored this season and the second time in three games they’ve scored more than 50 points.

“We were just hitting shots and that has a lot to do with repetition at practice or at least the practices that we’ve had over the last snow week at school,” Collins said.

Jefferson will try and extend their winning streak to six games with a trip to North Nodaway on Tuesday.

“I think this win is going to pull us together and now we’ll know that we can do it against very good teams,” Pappert said. “Teamwork pulls everything together and makes things easier.”