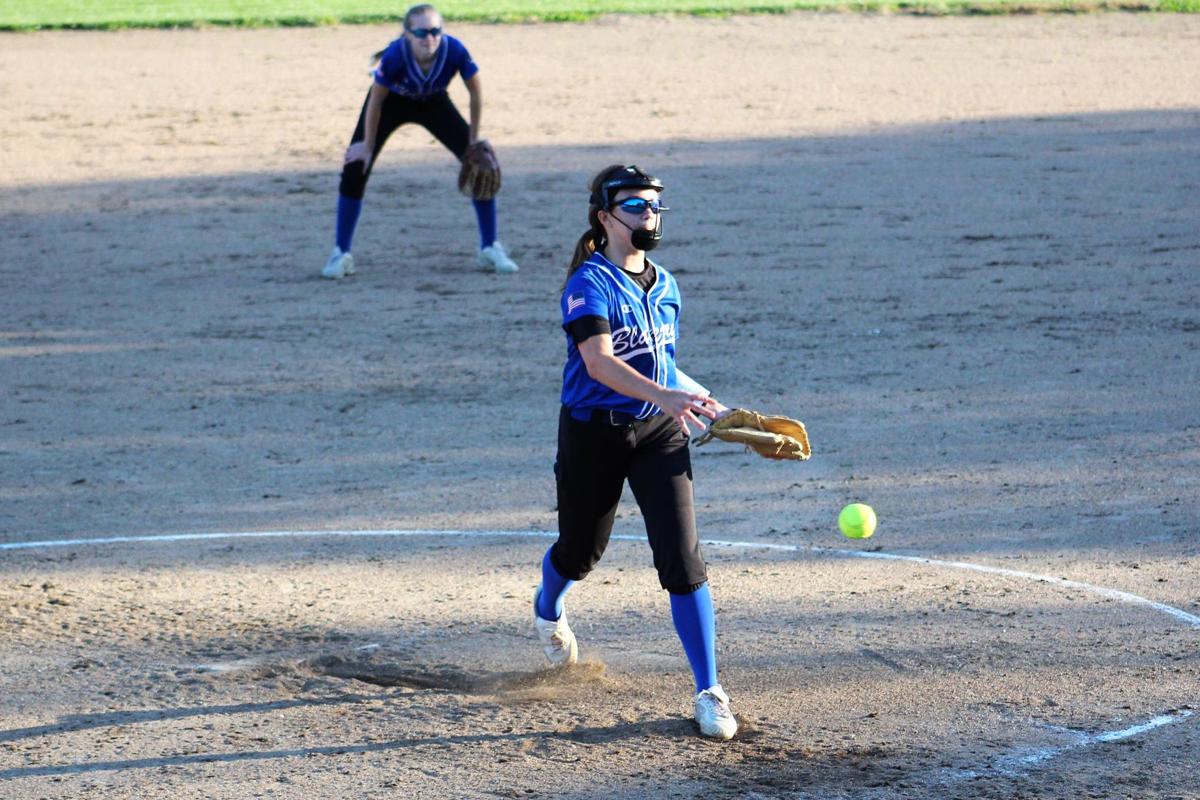 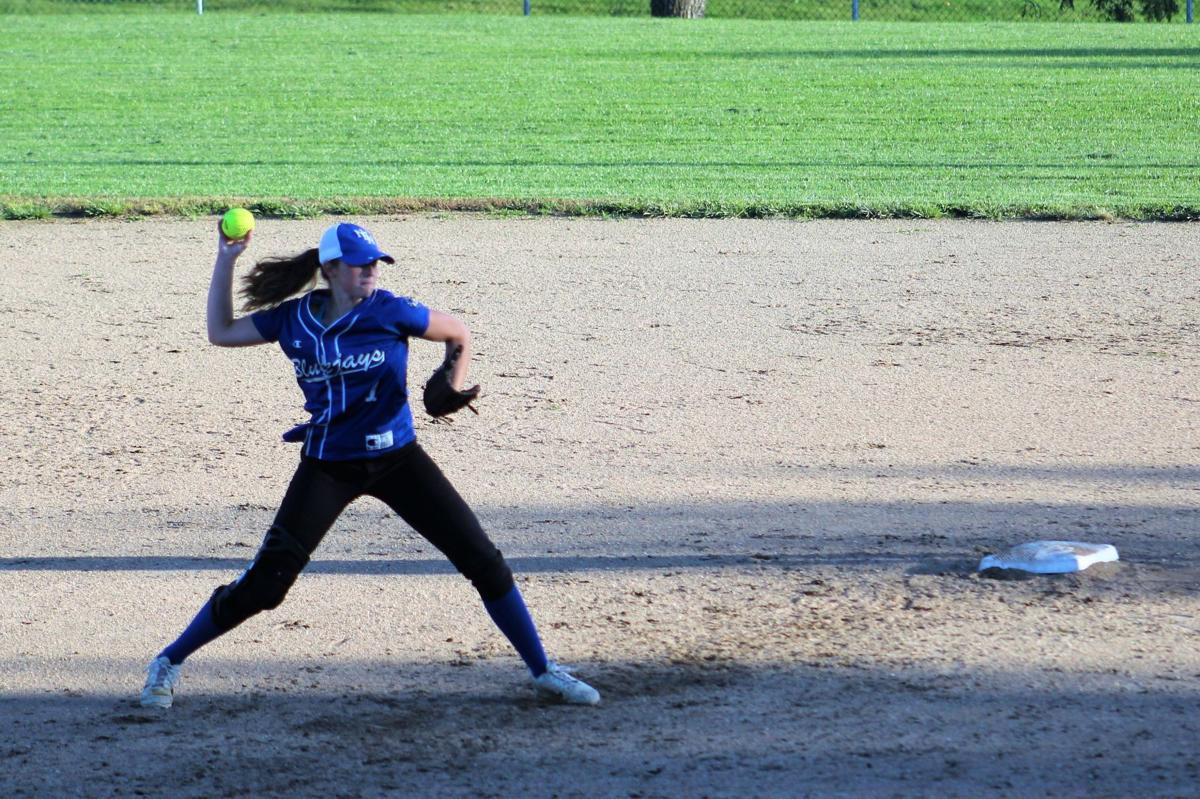 Northeast Nodaway's Cassy Redden throws out a base runner Monday night in Ravenwood. 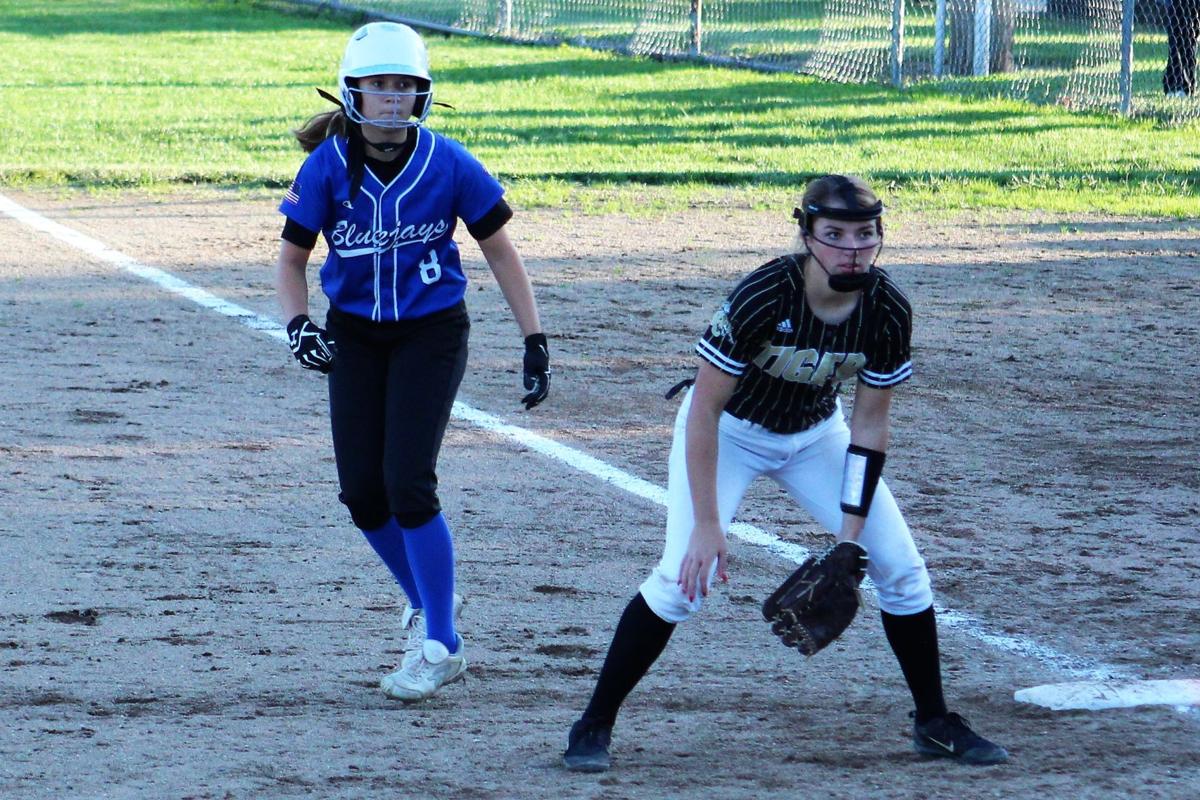 Northeast Nodaway's Anne Schieber takes a lead off of first base Monday night in Ravenwood. 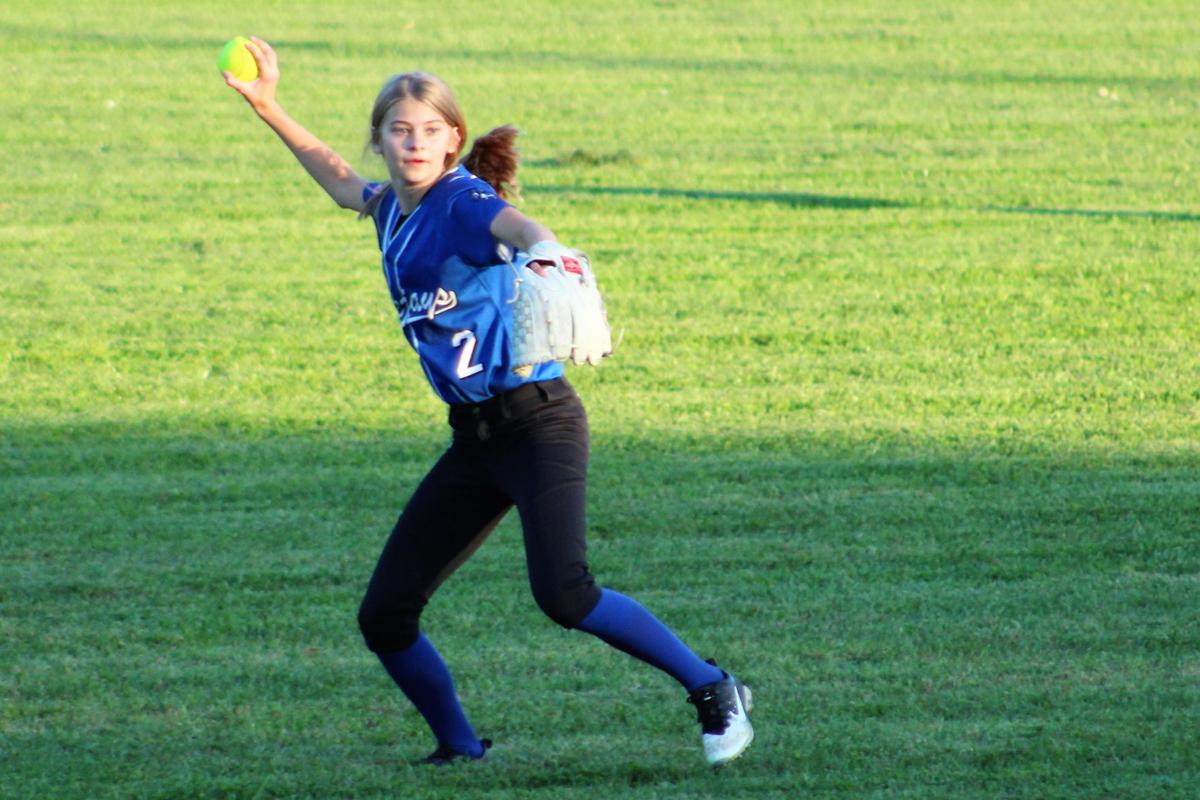 Northeast Nodaway's Jaden Atkins throws a ball back to the infield Monday night in Ravenwood.

Northeast Nodaway's Cassy Redden throws out a base runner Monday night in Ravenwood.

Northeast Nodaway's Anne Schieber takes a lead off of first base Monday night in Ravenwood.

Northeast Nodaway's Jaden Atkins throws a ball back to the infield Monday night in Ravenwood.

RAVENWOOD, Mo. – For the players and coaches of Northeast Nodaway, this season has been unpleasant to say the least. The Bluejays dropped to 0-12 on Monday night with their 9-1 loss to the Worth County Tigers. But it’s growth that head coach Mandy Adwell is looking for, and even with another game added to the loss column, the Bluejays continue to make progress.

Northeast Nodaway lost three players before the season started; one was their best hitter a season ago, the other was their top pitcher. The Bluejays are led by five juniors and zero seniors. So for pitcher Ann Schieber, it is all about growing as a team.

“Just getting better every game and keep improving,” Schieber said. “You know fewer errors, fewer strikeouts and just the fact that we keep getting better.”

Schieber and the Bluejays had their struggles early on. Worth County started the game with back-to-back doubles to give them a one-run lead before Northeast Nodaway ever recorded an out. Schieber retired the third batter of the inning, but Jill Hardy’s two-run double quickly made it 3-0.

Anna Spainhower followed Hardy’s double with one of her own. Hailey Adwell drove in the game’s fifth run with a single, but the Tigers were quickly back to hitting doubles with Morgan Beagle’s one out double to make it 6-0.

Schieber tallied her first one-two-three inning in the top of the second. MariBeth Lamb led off the bottom of the second with a walk. Tigers’ starter Braidy Hunt then recorded her fourth and fifth strikeouts of the game.

Northeast Nodaway, who had been held scoreless in their previous two games, then found a way to rally with two outs. Lauren McIntyre drew a walk which was followed up with a walk for Jaden Atkins. Sophomore right fielder Rachelle Rodriguez ended the Bluejays scoring drought with a two-out single to center field. A big run for the team who had been shutout in five of their previous six games.

The inning ended on that hit as some confusion on the base paths led to a runner being picked off going back to second. The opportunities were there for the Bluejays who stranded 11 runners in the loss.

“We had some good chances, we just couldn’t finish,” Coach Mandy Adwell said. “We’ve got good things happening, we had the bases loaded at once and we couldn’t score off of it. We just have to follow through with that.”

A misjudged fly ball to begin the third inning led to an inside-the-park homerun for Worth County’s Hardy. EmiLee Brown grounded out to third to give Northeast Nodaway their first out. The left side of the infield was a bright spot for the Bluejays as Delainey McIntyre and Cassy Reden as combined they recorded 15 outs for Northeast Nodaway.

“I like to pitch them inside to try and get them to hit it there,” Schieber said. “I know I’m not going to get it by them every time, but with them there it makes a big difference.”

A single and back-to-back doubles from the Tigers pushed the lead to seven. Schieber then struck out Anna Gladstone, but the past ball allowed Gladstone to reach first. Aivry Griffin drove in the game’s final run on a fielder’s choice.

Schieber led off the bottom of the third with a single. Standiford then reached first after getting hit in the head with a pitch. The two baserunners moved into scoring position on a double steal. Hunt struck out Dealiney McIntyre for the inning’s first out.

Lamb reached for the second time in the game with her second walk to load the bases for Northeast Nodaway. But Hunt settled in and strikeout Kirsten Morrow and Kami Adwell to end the threat and leave the bases loaded.

“I’m looking forward to tomorrow night, but we’ve got to get our strikeouts down and we have to hit the ball,” Mandy Adwell said.

The two offenses went silent after the third inning. Schieber and Hunt combined to allow just five baserunners over the final four innings. It wasn’t an easy outing for either starter, throwing 252 pitches between the two of them.

“Anne just is amazing, I don’t know what else to say, she does an amazing job,” Mandy Adwell said. “Defensively, offensively, an all-around good player.”

Schieber led the Bluejays with two hits, a single and a double. Northeast Nodaway had four hits total but reached base six times by drawing walks.

The Bluejays will travel to Cainsville on Thursday evening in search of their first win of the season. Ridgeway with Cainsville is 2-9 this season with six-straight losses.

“We did some good things and I’m looking forward to our next game and I hope this sets the tone,” Mandy Adwell said.