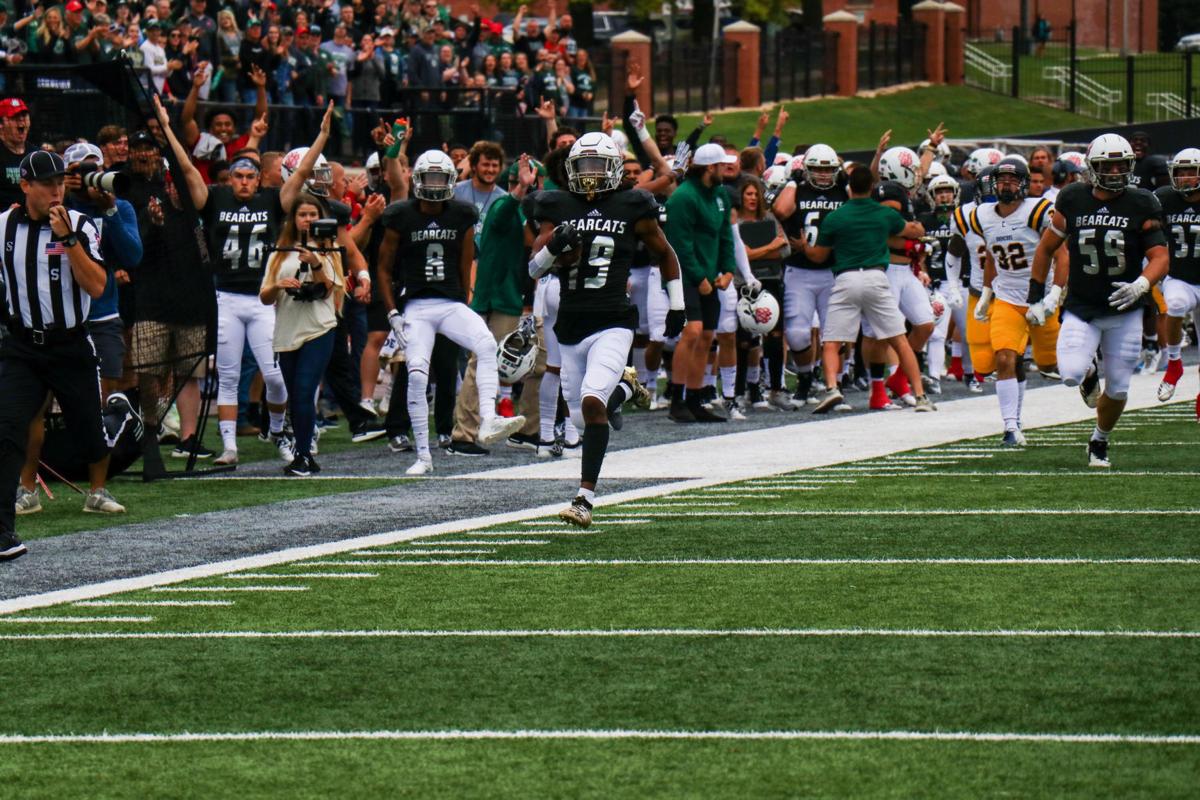 Junior wide receiver Imoni Donadelle runs down the Northwest sideline as he returns the opening kickoff back for a touchdown in the Bearcats' game against Central Oklahoma on Saturday. 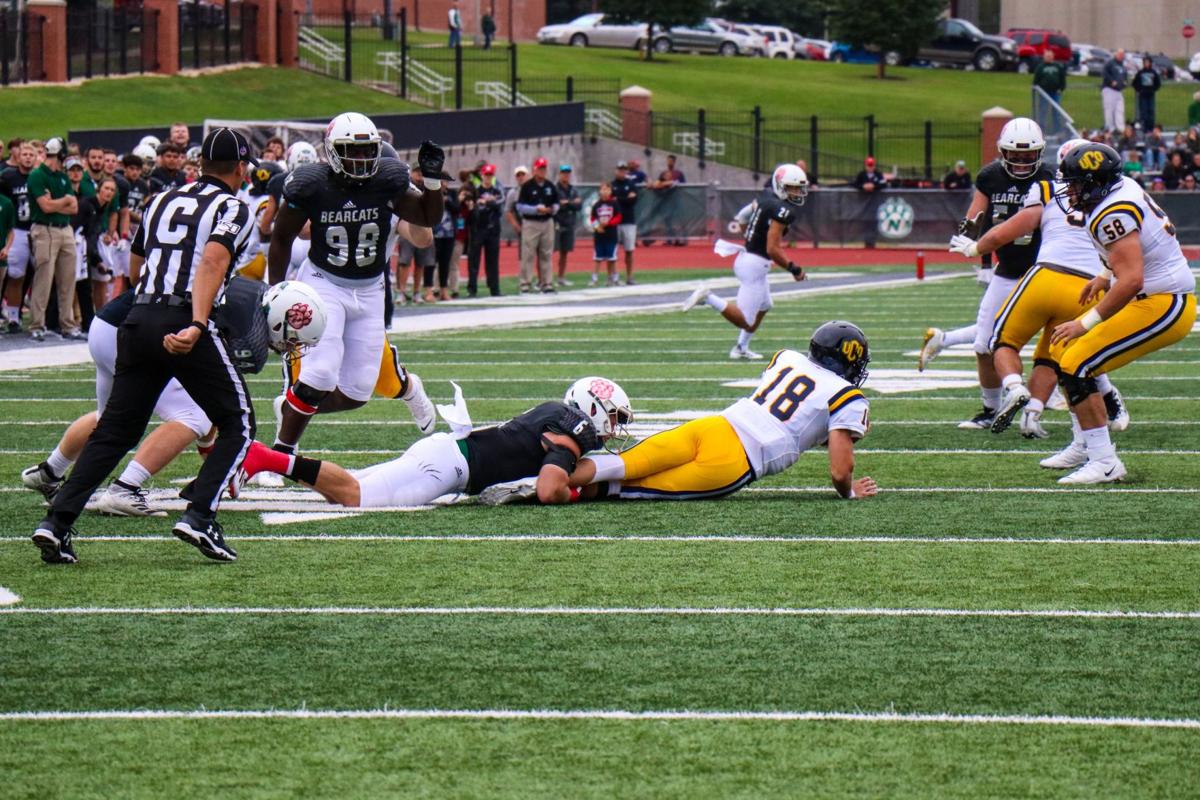 Senior linebacker Andy Hessler tackles Keats Calhoon behind the line of scrimmage in the first quarter of Northwest's game against Central Oklahoma. 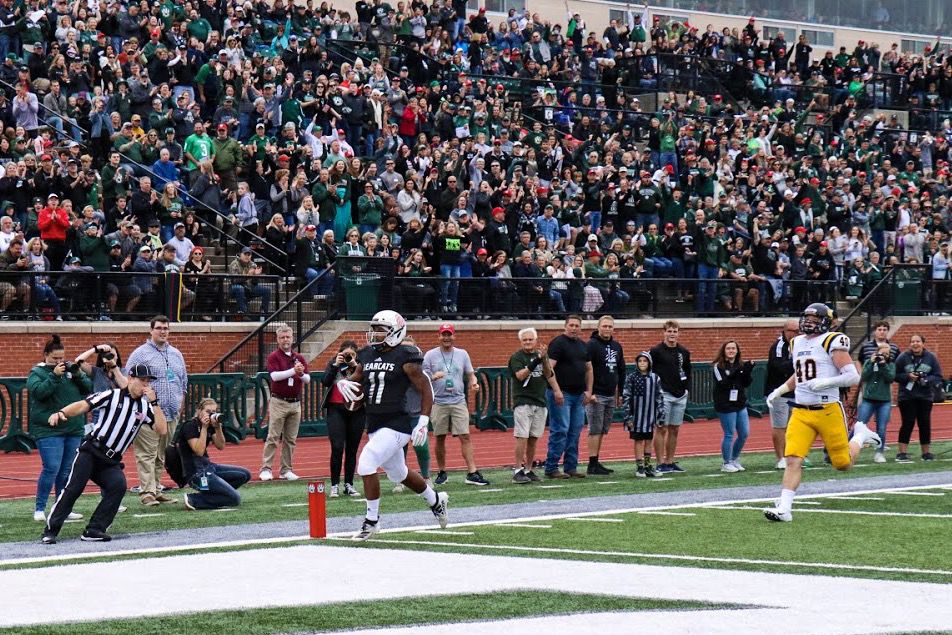 Senior running back Justin Rankin walks into the endzone after catching a pass from sophomore quarterback Braden Wright in the Bearcats game against Central Oklahoma Saturday. 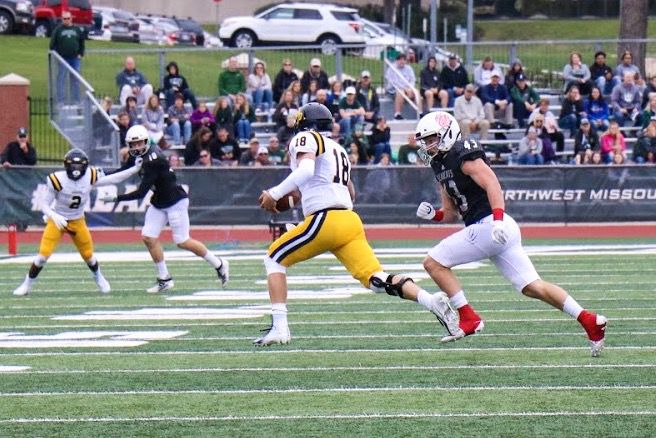 Junior wide receiver Imoni Donadelle runs down the Northwest sideline as he returns the opening kickoff back for a touchdown in the Bearcats' game against Central Oklahoma on Saturday.

Senior linebacker Andy Hessler tackles Keats Calhoon behind the line of scrimmage in the first quarter of Northwest's game against Central Oklahoma.

Senior running back Justin Rankin walks into the endzone after catching a pass from sophomore quarterback Braden Wright in the Bearcats game against Central Oklahoma Saturday.

MARYVILLE, Mo. — Every week this season Northwest Missouri State football coach Rich Wright has given his team an emphasis going into that week’s game and for the first time this year, his message is the same as last week.

Following their wet and high scoring 59-10 Family Day win over Central Oklahoma Sept. 28, and a 66-34 win over Missouri Southern two weeks ago, the No. 7 ranked Bearcats (4-0, 4-0 MIAA) are still searching for consistency as they travel to Emporia State (2-2, 2-2 MIAA) for the first time since 2016 to face the Hornets.

“We’ve got to continue to get better,” Rich Wright said. “Like I told the players (Monday), we played well and that’s great but now what I’m looking for is that consistency piece. So that’s the next challenge. Can we consistently play at a high level?”

Northwest showed it could play at a high level against the Bronchos by scoring on its first eight drives of the game. While the game was stalled by a three-hour rain delay, the Bearcats’ offense never stalled collecting 568 total yards of offense.

Sophomore quarterback Braden Wright had a career-day once again throwing for 305 yards and four touchdowns. Since the start of his second year under center, Braden Wright has set a career-high in passing yards each game. The Elkhorn, Nebraska native now has thrown over 1,000 yards this season with 11 touchdowns in four games.

Northwest has scored on 14 of 15 trips to the red zone this season, converting 11 touchdowns and three field goals. The only time the Bearcats were unable to get points was in the final seconds of their win over Missouri Western when they took a knee.

“It’s great to play well once,” Rich Wright said. “Are you going to play your best game every week? If we’re going to go where these guys have set as their goals then we’ve got to improve week to week. One of the things I tell them all the time is you either get better or you get worse but you don’t stay the same.”

Rich Wright’s calling card — the defense — had a big performance on Family Day for the coach. The defense allowed a season-low 4.7 yards per play against Central Oklahoma, moving its season average yards per play to 5.1.

The front four for the Cats has played well, allowing 2.3 yards per rushing attempt on the season. Sophomore Sam Phillips said he has seen the defensive unit improve throughout the season and has seen glimpses of consistency.

“I think that shows how we’ve been working together and trusting each other more as a defense,” Phillips said. “A lot of it is if you don’t trust your teammate and you try and do some of their job, then you’re going to get out of position and that’s when everything goes haywire. … With communication and trusting our teammates, I do think we’ve gotten a lot better and I think we can continue to get better.”

Northwest’s defense has played well when it comes to forcing turnovers. The Bearcats rank second in the country in interceptions and No. 8 in turnover margin with +7. Northwest has also recorded four defensive scores in four games.

“I attribute that to older guys and coaches really pushing our practice and energy towards practice, our energy in practice and overall, having a good practice start to finish,” Phillps said. “That’s something we struggled with early in the season and, as coach said, we’ve been getting better at it. … We’ve just got to keep building off that.”

Junior wide receiver Imoni Donadelle was named MIAA’s special teams player of the week as he accrued 174 kick return yards against Central Oklahoma, good enough for a school record. This marks the fourth time in four weeks a Northwest player has received an MIAA weekly honor.

The Bearcats lead the nation in kickoff return average with 40.5 yards per return. Northwest has returned six kicks for 243 total yards.

“It’s just doing something small that leads to big outcomes,” Rich Wright said of the special teams play. “You can change games on special teams. When you can open up a football game like that, it’s got a pretty powerful impact.”

Emporia State comes into the matchup after 50-7 win over Lincoln in Jefferson City. Redshirt freshman wide receiver Wil Amos had a career-high 12 catches for 143 yards in the Hornets win while redshirt sophomore quarterback Dalton Cowan threw for 331 yards and three touchdowns.

Complimenting those two is junior running back Carlos Grace. The 5-foot-10 junior has 295 yards on 59 carries this season.

For the second time this year, the Bearcats will face another three-man defensive front. Northwest managed to put up 66 points in the first occurrence they saw the set. Rich Wright said he is looking for an offensive uptick this week, despite putting up 59 points last week.

In the past 26 matchups against the Hornets, the Bearcats have come out on top. The last time Emporia State beat Northwest was Oct. 1, 1994.

“We’ve got to push the envelope as we progress through the season because the challenges are only going to get bigger,” Rich Wright said.