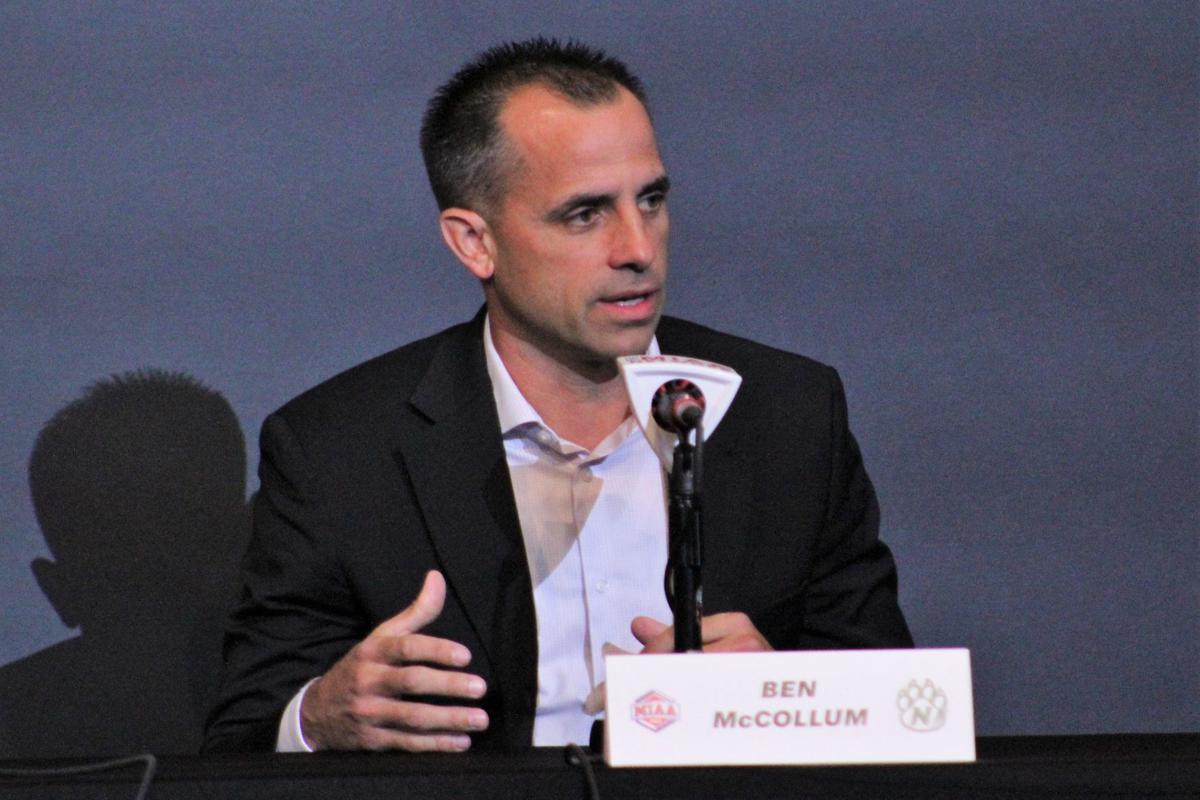 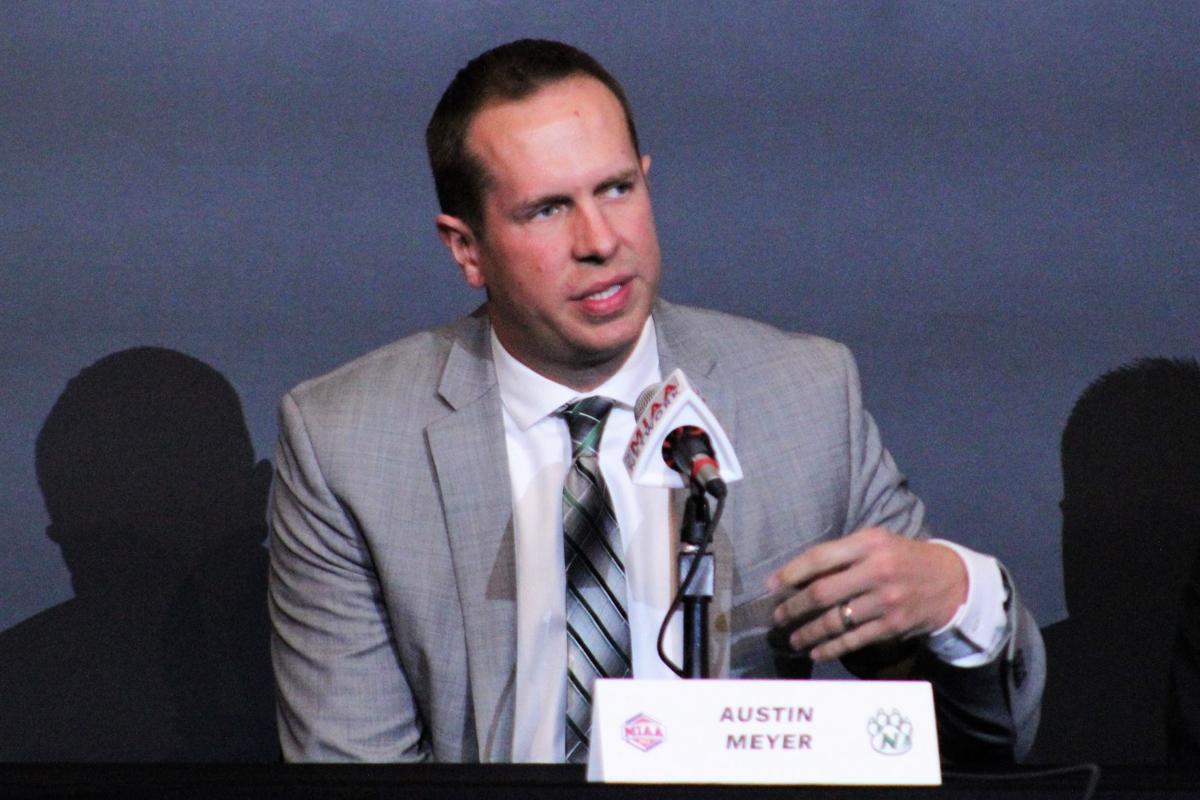 McCollum took over a Bearcat program that had won just 12 games the year before. Northwest was no stranger to success after two Elite Eights in the early 2000’s. But the program was in need of a fresh face and they found that and more in the former Bearcat.

Already on the staff was Meyer who began as an assistant coach the year before. The two coaches process of turning the Bearcat program into what it is today.

Success didn’t come right away for McCollum and the Bearcats, but McCollum’s passion was evident from the beginning according to Meyer.

“From day one he was really high-strung and everything was about how we could get better,” Meyer said. “It started with recruiting, we gotta get this kid, bring this kid, call this kid and that was the first thing we did. Those first two years weren’t a lot of fun, we lost games, had a losing record, didn’t make conference tournaments and he was always focused on just getting better.”

But success wasn’t far away, McCollum and Meyer went on to win 203 games together. The program went to its first Sweet 16 since 2004 in McCollum’s fifth year. That was the start of three-straight Sweet 16 appearances and a national championship in the 2016-2017 season.

“To remember those tough times and then win that championship in 17 was really rewarding,” Meyer said. “Then last year’s championship was rewarding because I know how much time and effort was put into it. I remember the day before the championship I was at practice and I said, ‘This is a lot more fun when you’re not actually coaching it and you get to hangout and watch.’”

McCollum has turned a university that has been known as a football school into one of the best basketball programs in the country. McCollum’s name will continue to be a popular one among bigger programs as he continues to stack up wins in the MIAA. The Bearcats are once again the favorite to win the conference. But for the 10th year head coach, it’s not all about wins or moving on to a bigger program.

“Part of it is, I don’t see it from the outsider’s prospective that we’ve accomplished so many different things, I see it as have you made an impact on these student-athlete’s lives,” McCollum said. “If you can continue to do that, I think it’s important to keep that going here and keep that trend going that direction. You can make just as big a difference here as you can anywhere else.”

All eyes will be on the men’s program as standards for success are as high as any school in the country. As for the coach down the hallway from McCollum, it is still a work in progress as he continues to try and pull the women’s program from the pits of the MIAA.

“I’m really excited about the leadership of the upperclassmen and the way they’ve worked,” Meyer said. “We have six new freshman and one new transfer, we’ve had a few injuries but we’re getting better.”

Recruiting has been a main focus for Meyer just as it was during his time with McCollum.

“Obviously from a recruiting standpoint it’s making those connections and developing those connections list of what programs we need to be recruiting in AAU and what players to look out for,” Meyer said. “From a basketball standpoint, we’re not putting in a new system, teaching it to our players and staff. In year two now we’re in a much better place because we have those returners who know what to expect.

Meyer benefits from having a close relationship with McCollum and the former assistant still makes time to learn a thing or two from his former boss.

“It’s a daily clinic with him, especially now that we’re not practicing at the same time I can go in there and watch him practice,” Meyer said. “Now a lot of stuff we’ve been doing for the last 10 years anyways, now from a personnel standpoint we won’t be running alley-oop plays or nothing like that. The biggest thing he brought to my attention was focusing on that culture, focusing on the relationship with the kids. Obviously putting in the time, working hard and not focusing on the wins and losses.”

McCollum is there to give advice when needed, but also respects his former colleague enough to run things his way.

“When he wants to ask for advice, he’ll ask it,” McCollum said. “I think going out of your way to give him too much advice hinders his growth. You want to tell him enough, but you don’t want to tell him too much. He’s very good at understanding that he doesn’t have all of the answers and seeking the advice for others. Similar as I was, even to this day I don’t have all of the answers.”

The culture at Northwest Missouri State is very important to both men. It is a university that has grown to have high expectations for its athletic programs. For McCollum, it’s continuing to build on that winning culture and infuse that into his players. For Meyer, it’s taking the experience gained from coaching with McCollum to build that winning culture in women’s basketball.

“It’s fun to look back, I think somebody sent out a picture one day with everyone’s head down on the bench after one of those early year games and it’s fun to see where it is now,” Meyer said.

Meyer has little doubt that his program is headed in the right direction.

“It would be really fun to get it going,” Meyer said. “I think we will, I’m confident we will. It’ll just take some time and good people.”

McCollum’s job will be difficult this season as he tries to instill in his players the hunger for winning after coming off a successful season last year.

“It’s not easy when you don’t have that natural hunger that comes externally from people doubting you,” McCollum said. “We have to find ways to manufacture that and hopefully our kids understand that.”

From a peer standpoint, McCollum will be there for Meyer if needed—but the men’s coach believes he got the message across from their near decade of coaching together.

“Coach (Meyer) was with me for eight or nine years so I think he got all the advice I think he was going to get during that time,” McCollum said.