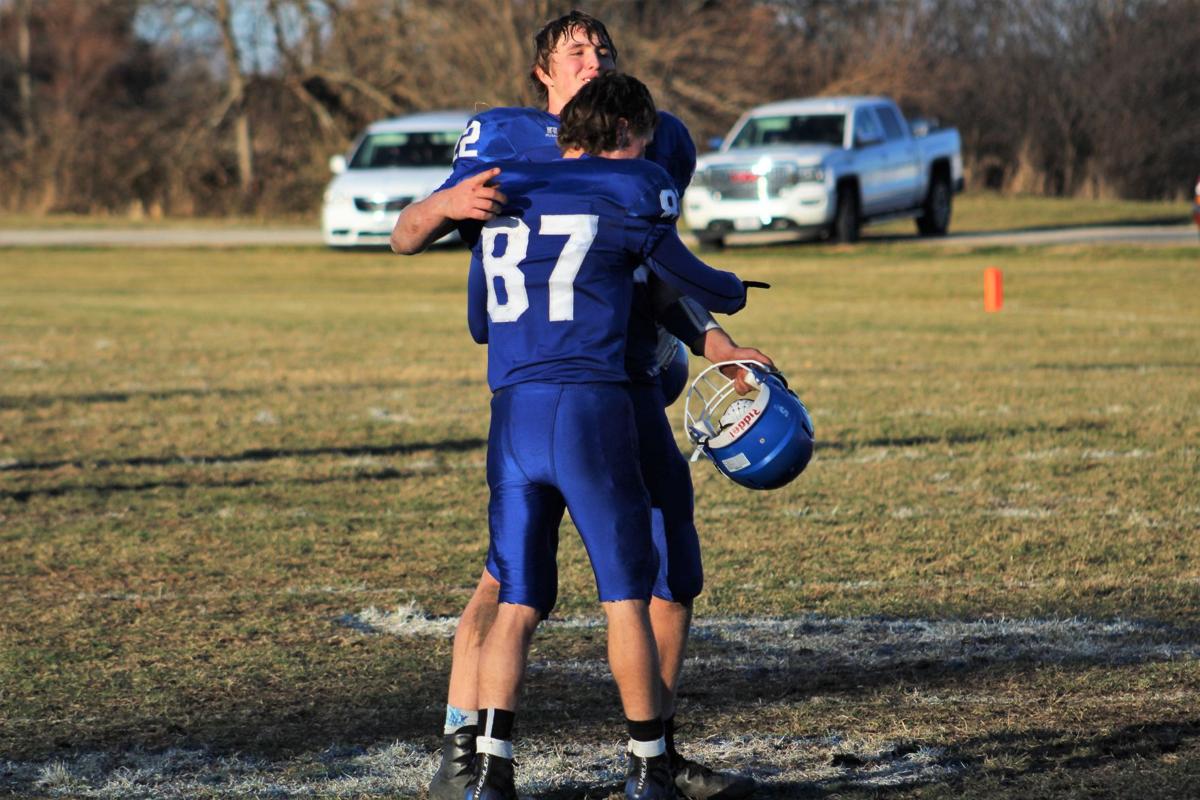 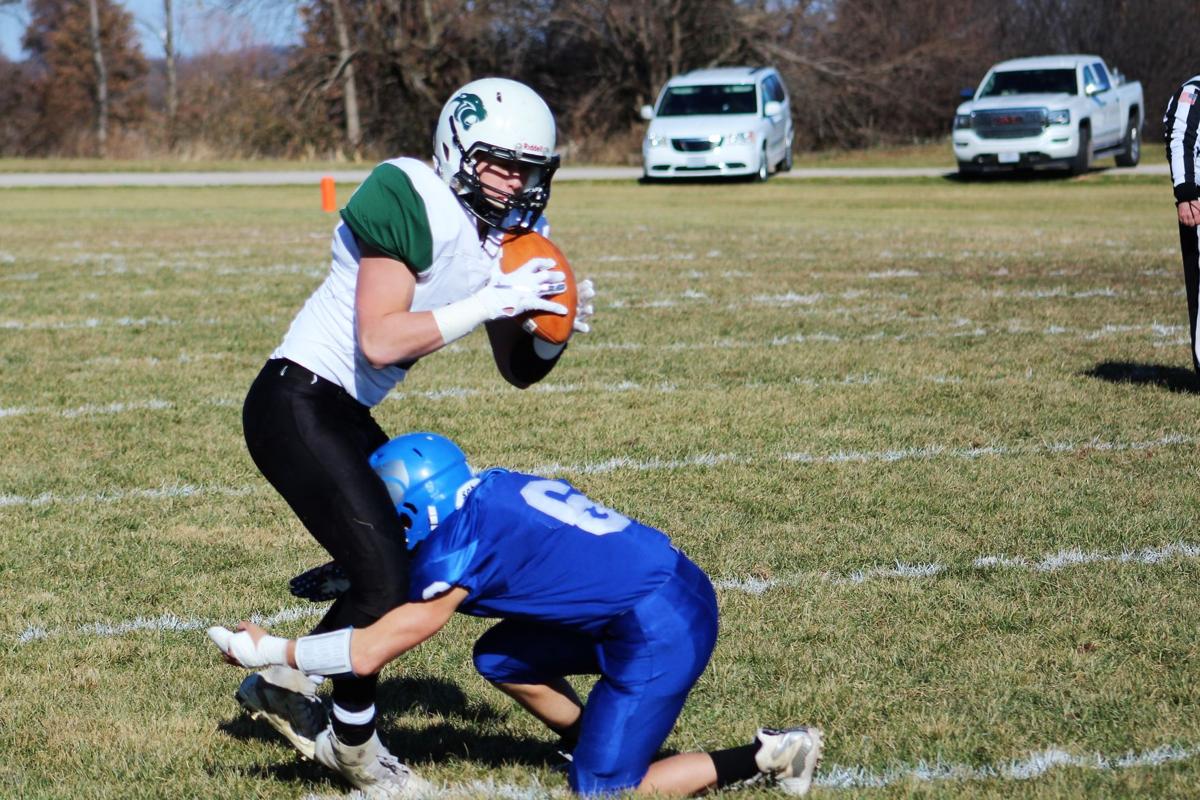 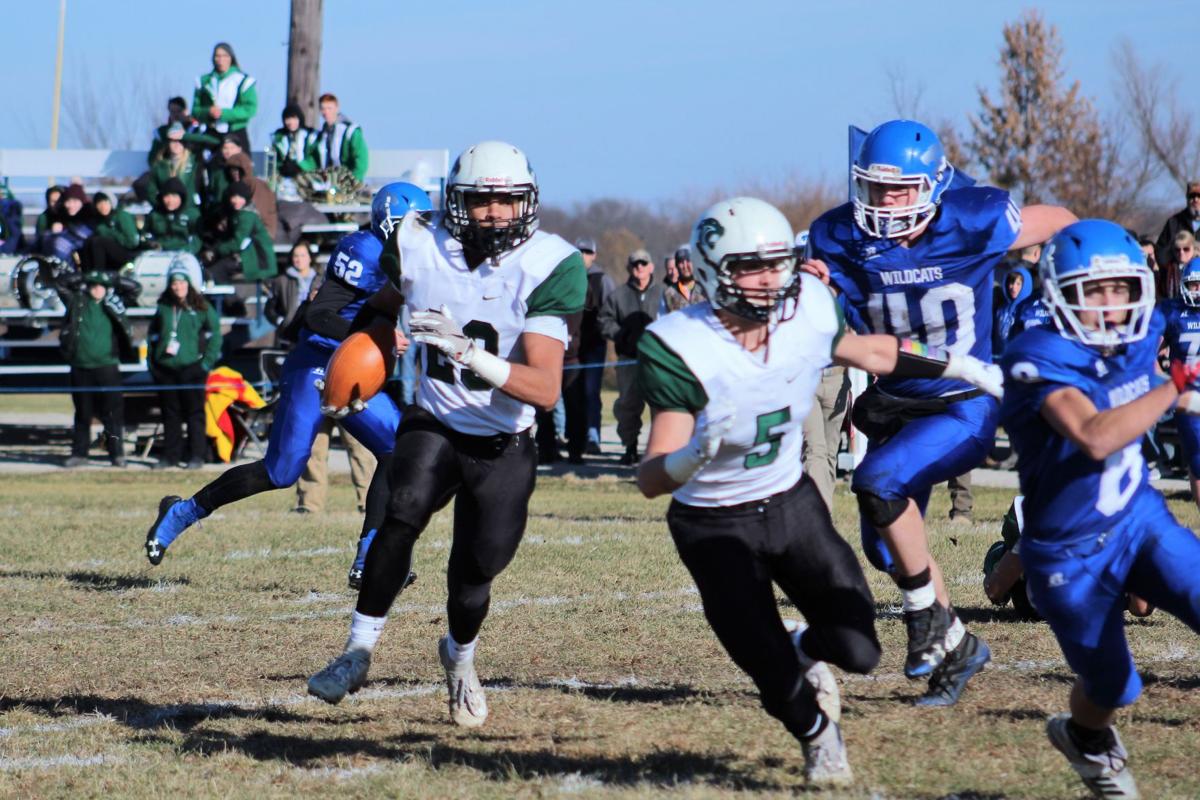 Pattonsburg's Patrick Cowley rushes for a first down Saturday afternoon in Ludlow. 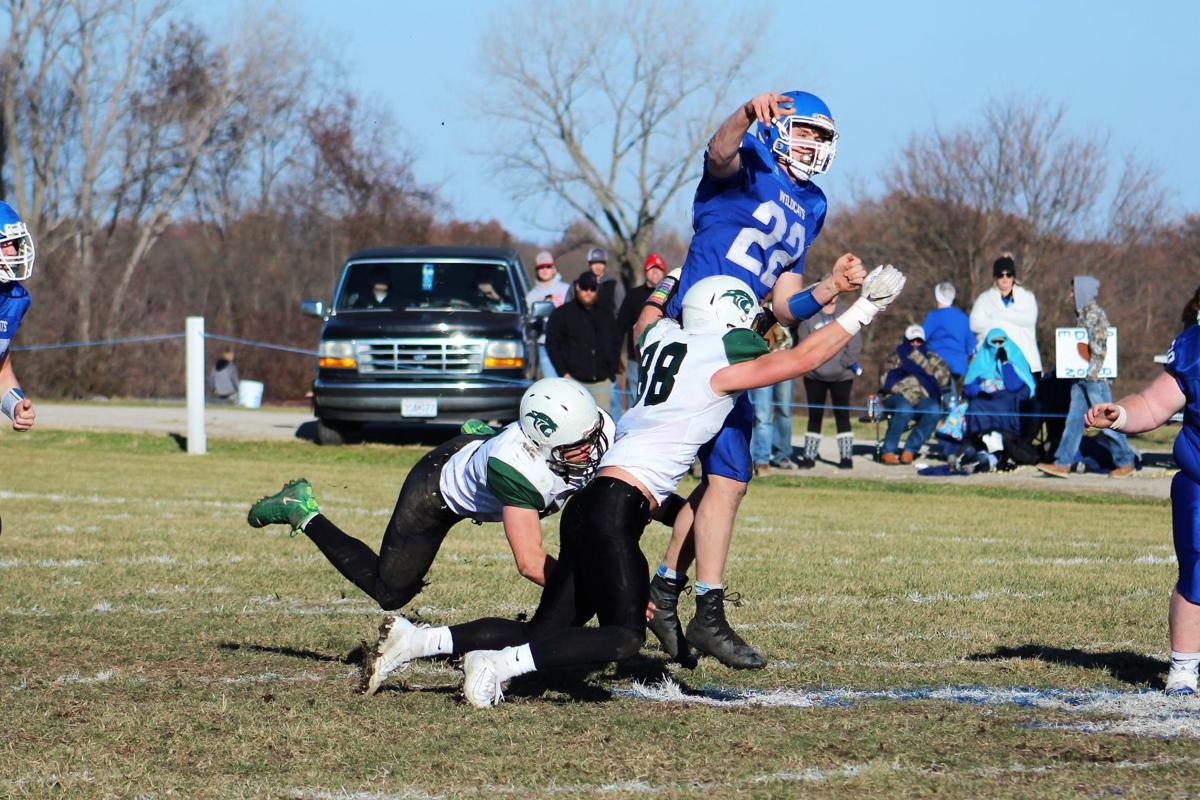 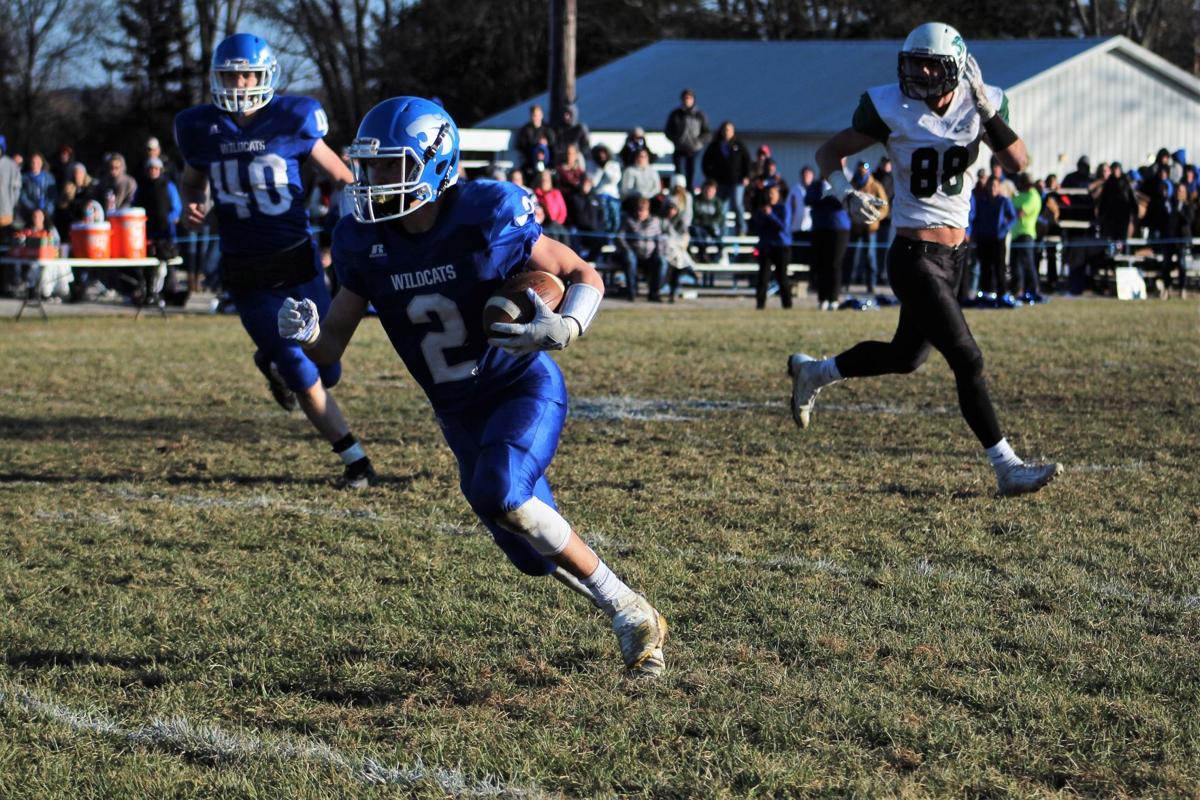 Southwest Livingston's Chase Neptune rushes for a first down Saturday afternoon in Ludlow. Neptune had 120 receiving yards in the Wildcats win.

Pattonsburg's Patrick Cowley rushes for a first down Saturday afternoon in Ludlow.

Southwest Livingston's Chase Neptune rushes for a first down Saturday afternoon in Ludlow. Neptune had 120 receiving yards in the Wildcats win.

“That was so intense, they’re so hard to defend and your mind is always think that they could score at any time,” Wildcats coach Oren Magruder said. “We turned it over that much and gave them a chance to creep back in. You know they’re so good of an offense that you don’t really get a chance to relax and so I’m going to relax a little bit and try to process what just happened.”

Anderson led the state with 2,574 yards rushing and finished four in the country with that total. The Panthers were well aware of Anderson’s ability coming into their Saturday matchup—but even with that knowledge, they had no answers for the senior quarterback.

“He’s good, once he gets rolling he’s hard to start,” Panthers coach Scott Cavin said. “That kid is heck of a ball player and showed a lot of grit and fight today. He’s fast, he’s big, just a good ball player and we gave him space and he took advantage of it.”

Southwest Livingston started with a dominant first quarter. The Wildcat defense forced a turnover on downs on each of Pattonsburg’s first three possessions.

Anderson took the offense’s first play of the game 51 yards for a touchdown. The Panther defense had multiple opportunities to stop the Wildcats and the first of those misfortunes came on Southwest’s second drive.

Cavin’s defense forced the Wildcats into a fourth and 14. Southwest Livingston kept the offense on the field and Anderson found his favorite target, Chase Neptune, open for a 41-yard reception. Anderson finished off the drive with a two-yard touchdown run.

Willhite and the offense started their third drive with passes of 11 and 16 yards. The Panthers followed those plays up with an incompletion, a negative play and a false start. The drive once again ended with a turnover on downs. Anderson took the next play 45 yards for a touchdown to give Southwest a 20-0 lead.

Pattonsburg and Cavin went with a different game plan on their next drive. Willhite carried the ball four-straight times to open the drive for 23 yards. Willhite connected with wide receiver Patrick Cowley for 14 yards and then gave the Panthers their first score with a nine-yard touchdown run.

“I don’t know if they were doing much to give us trouble, the ball was slipping out of the quarterback’s hand and he couldn’t really get a good grip on it to throw it,” Cavin said. “They tackled well and I should have ran the ball earlier than I did when they were giving us nobody in the box when they had just two there. I was trying to throw it and shouldn’t have done that.”

Anderson answered the Panthers’ score with a 50-yard touchdown run. Again, it was an opportunity for the Pattonsburg defense to make a stop as the run came on a third and 20 for the Wildcats.

With the game starting to look like their blowout loss in the semifinals last season, Willhite and the Panthers took some of the momentum back, starting with a 40-yard touchdown pass from Willhite to Cowley.

Anderson then made his first mistake of the game, throwing an interception to junior Brett Emig. Three plays later Willhite found tight end Carter Crone for a six-yard touchdown.

Southwest used just four plays on the next drive to push the lead back out to 20 with a touchdown pass from Anderson to Neptune. The Wildcats’ defense then forced a turnover on downs, giving the offense an opportunity to possibly put the game away.

The Livingston drive consisted of four plays and four runs from Anderson. Anderson carried the ball three times for 20 yards on the first three plays of the drive. On the fourth play, the Pattonsburg defense forced a fumble, giving their offense a chance to but into the Wildcats’ lead.

The Panthers, though, were unable to capitalize on their opportunity. Willhite connected with Crone and Cowley on back-to-back passes for a combined 23 yards. Miscommunication on the next play led to a Willhite interception.

The fireworks started early in the second half as for the third drive of the game, Anderson took the opening play in for a touchdown.

“Mack is a phenom,” Magruder said. “He’s the heartbeat of our offense, he runs it and has the ability to make checks at the line of scrimmage. We lean on him, but it takes the other seven guys blocking for him when we’re in the run game.”

Willhite and the Panthers have been known for their second half heroics this season and even down 52-24, their confidence never waivered. Willhite took snap on Pattonsburg’s second play of the drive and tossed it 58 yards to Cowley for their second touchdown connection of the game.

Southwest Livingston’s next drive saw them convert another fourth and long as Anderson found Neptune for 35 yards on fourth and nine. The Wildcats worked the ball down to the three, but the Panther defense forced Anderson to put the ball on the ground for the second time in the game.

Pattonsburg used the opportunity to force-feed their top receiver. Cowley caught seven passes for 34 yards and finished the drive with a five-yard touchdown run to make the score 52-38.

The Panthers’ Kaden Koch put the Wildcats in a hole to start the ensuing drive with one of his two sacks on the day. Anderson completed a short pass on second down and was tackled for a loss on third down—putting Southwest in a deep hole. Fortunately for the Wildcats, Pattonsburg was flagged for a personal foul on the Anderson run.

Anderson then rushed for 12 yards on fourth and three and then connected with Neptune for a 28-yard touchdown. The blows traded by the senior quarterbacks continued as Willhite ran the ball three times for 43 yards and a two-yard touchdown to make the score 60-44 with 1:13 left in the third quarter.

The tide continued to turn in the Panthers favor as Anderson turned the ball over for the fourth time in the game by throwing an interception to Dakota Eaton.

“We made some adjustments and made some stops,” Cavin said. “Our defense was good enough to win, I thought our offense was subpar until that fourth quarter.”

Willhite rushed for his third touchdown of the game after the interception, cutting the lead to one score for the first time since Southwest Livingston’s first drive. The Wildcats next drive consisted of two Anderson runs and a Neptune carry to set up a fourth and one.

The Pattonsburg defense, which struggled all day to stop Anderson, stopped him half a yard short of the first down. But the Panther offense couldn’t respond, fumbling on the second play of the drive.

The turnover-heavy game continued on the Wildcats’ possession. After a 20-yard run from Anderson, Neptune’s 12-yard catch ended with a fumble that was recovered by Eaton.

With a chance to tie the game, the Panthers went on an 11-play, 43-yard drive. But dropped passes hurt the Panthers all afternoon and one of the biggest drops came on a fourth and six attempt on the 11th play of the drive.

“They tackled well in space and didn’t give up any big plays on our screen ball like we’ve had all year,” Cavin said. “We dropped some balls too that are uncharacteristic of our guys.”

Southwest’s response to their defensive stop was a seven-play drive that ended with a 32-yard touchdown run from Anderson—his seventh of the day. The touchdown came with 2:32 left in the game and gave the Wildcats a two-score lead.

“Just being able to get out in the open and get some space where I can pick up as much as much speed as I can and I couldn’t do all that running without my teammates putting up good blocks in the open field,” Anderson said.

Pattonsburg wasn’t finished as Willhite again found Cowley on the offense’s first play for a 45-yard touchdown with 2:10 left in the game. But again, Anderson answered with a 40-yard touchdown run on the Wildcats’ second play from scrimmage.

The scoreboard continued its workout as Willhite found Emig for a 60-yard touchdown with just over a minute and a half left in the game. The Panthers needed an onside kick if they were to have any chance to tie or take the lead—and an onside kick recovery is what they got.

Willhite began the drive with a six-yard pass to Cowley, then a 10-yard pass to Emig. The Pattonsburg quarterback then scrambled for six to get inside the Southwest 20-yard line. But on the fifth play of the drive, Willhite’s pass attempt to Eaton was intercepted by Hoerr.

The rollercoaster of that final two minutes was almost too much for Magruder.

“Oh, man, you talk about the highs and lows of a football right there,” Magruder said. “Our kids are some gritty kids and instead of letting down, they kept playing through it. We switched back to our base defense after giving up a few big plays trying to play our sub defense. I get all frustrated and I’m trying to decide if I’m going to call a timeout, what I’m going to do with the clock here and Ethan Hoerr reads a slant beautifully and steps in front of it.”

For Pattonsburg, the loss means the senior group that means so much to Cavin and his staff will fall short of the state title game for the second-straight year. The Panthers will lose eight seniors this year, including Willhite, who set a new state record with 93 passing touchdowns this season.

“They were something special, they showed it today and there are a lot of guys that are going to play at the next level,” Cavin said. “You hate to see it end this way and it always ends unexpected unless you win it all. We had a good squad, we had athletic kids and a heck of a senior class and everyone knows that.”

Willhite completed 37 of 58 passes in the game for 485 yards and seven total touchdowns. Cowley caught 19 passes for 252 yards and three touchdowns.

For Southwest, they will travel to Columbia next Saturday to face the Mound City Panthers. The Wildcats defeated the Panthers 58-34 in week four. In their previous rematch against a team who defeated them, Mound City came out victorious the second time around. Southwest knows they will have their hands full with the defending state champions.

“We’re just going to have to match their physicality, take care of the ball and take advantage of every possession,” Anderson said.

For Anderson, going to the state title game runs in the family.

“It feels amazing, the last time the school went to state my dad was playing, so it’s pretty sweet,” Anderson said.

Anderson wasn’t shy about calling his dad old when asked when that was.