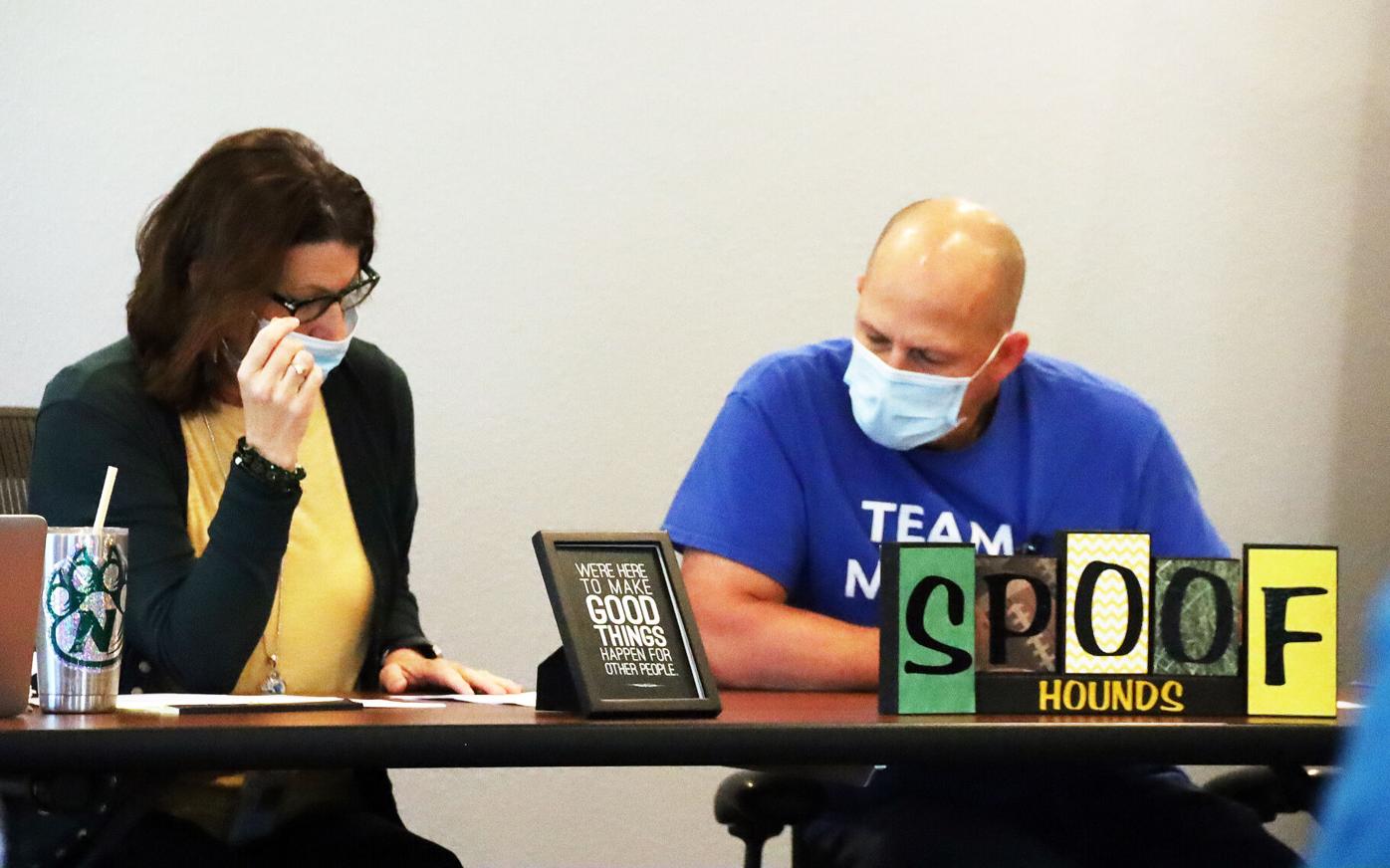 Maryville R-II Superintendent Becky Albrecht looks at paperwork with Board of Education President Jason Haer before Friday's special meeting. The R-II Board of Education approved with a 5-2 vote to shift to a hybrid teaching format starting next week. 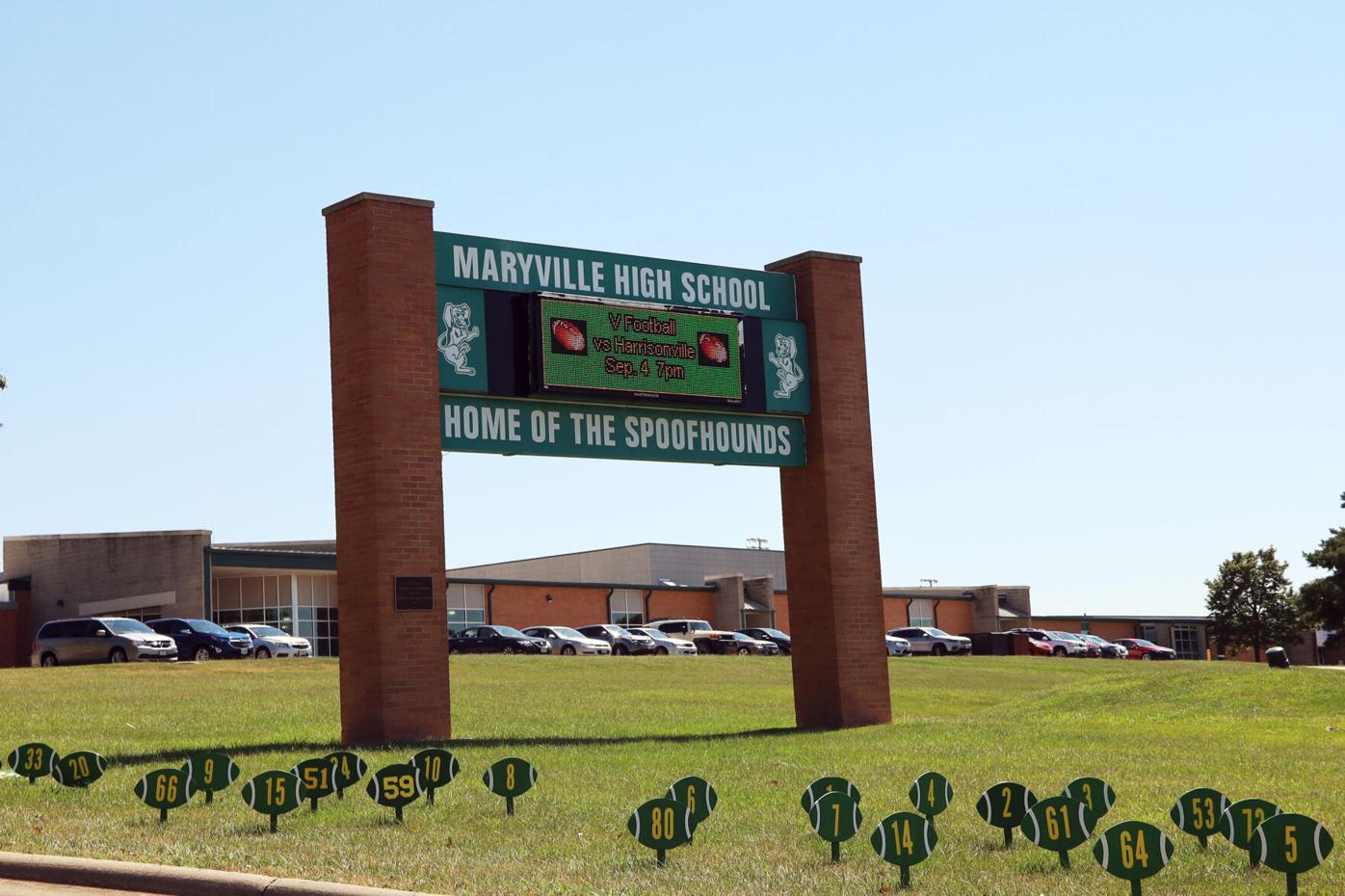 Maryville High School is shown Friday afternoon. The R-II Board of Education approved with a 5-2 vote to shift to a hybrid teaching format starting next week.

Maryville R-II Superintendent Becky Albrecht looks at paperwork with Board of Education President Jason Haer before Friday's special meeting. The R-II Board of Education approved with a 5-2 vote to shift to a hybrid teaching format starting next week.

Maryville High School is shown Friday afternoon. The R-II Board of Education approved with a 5-2 vote to shift to a hybrid teaching format starting next week.

MARYVILLE, Mo. — After only eight days of school, the Maryville R-II Board of Education voted to shift the high school to a hybrid-teaching format during a special meeting Friday due to the uptick in county and school district COVID-19 quarantine numbers.

After an hour of discussion about the pros and cons of the move, board members voted 5-2 — board members Josh McKim and Frank Grispino voted against — for the change in education structure at the high school that will last until the end of first quarter, Friday, Oct. 16. The district will re-evaluate at that point.

Starting next week, the high school will look a little more sparse.

Superintendent Becky Albrecht described the weekly structure with students being separated into two color groups, green and yellow. The green group (last names A-L) will attend in-person classes on Mondays and Wednesdays, and engage in remote instruction Tuesdays, Thursdays and Fridays. The yellow group (last names M-Z) will attend in-person classes on Tuesdays and Thursdays, but take part in remote instruction on Mondays, Wednesdays and Fridays.

Extracurricular activities and athletics will continue. Normal practice times will be held.

Next week’s classes also will be altered from the new regular schedule due to Labor Day. Albrecht said the green designated students will start class on Wednesday. The yellow group will begin on Thursday. This allows teachers Tuesday to prepare for the switch and still gives students Friday to contact their teachers directly with any questions.

“There is simply no way the district can get around the quarantine procedures set by the county; no matter what you may have heard. The state has actually told local health departments to make sure they are following the guidelines so there is consistency from district to district across the state,” Albrecht noted in her release to parents.

She explained in the meeting that because half of the student body will not be in class each day, it will allow for students to meet six-foot social distancing guidelines in assigned seats. She said this will help with contact tracing, which should lessen.

“You would be shocked to know the amount of time that administration, teachers and nurses are spending contact tracing.” Albrecht said. “It would go away if we went to this model. … The only solution that we can see is to move to the hybrid model and we’re ready to make that move.”

She described staff and administrators as having to look over cameras and talk to teachers about students leaving to use the restroom and being in unrecorded small groups, then aggregating that data and sharing it until late into the evening with Albrecht, just to get the information back to the Nodaway County Health Department.

She said there has been a lot of concern from students about being the one who gets others quarantined. Albrecht said, as of Friday the district has 49 students quarantined, and four active cases. According to Assistant High School Principal Bryan Grow, that’s about 11 percent of students in quarantine.

“When we look at the students in our hallways and classroom coming and going, the mental health is a concern that we share for our kids,” he said. “There are kids that are pretty stressed out and worried about getting quarantined or getting COVID. And we have a lot of students going to our counselors.”

High School Principal Thom Alvarez said the school has seen an uptick in students visiting counselors with concerns about the virus and that their stress level is already very high. He attributes this to being afraid they will be the reason classmates have to be quarantined, not that they’re scared to get the virus.

He described an interaction between a parent who “threatened” a student for causing his child to become quarantined.

“That is the level of that mental health,” Alvarez said. “Kids are terrified to be around their friends. … They’re so happy to be at school and then they’re so on edge to not mess things ups.

“I have been overwhelmingly impressed with the kids’ ability to wear masks. … The kids have stepped up to that challenge without hesitation. It’s because they want to be there and they want to be there with their friends. .. But I think now they’re in such an unknown limbo kind of thing. ‘Am I six feet from them?’ They are so concerned about that they’re maybe not absorbing what they’re learning.”

The district has had a lot of calls and comments from parents of students who are concerned for their children and want them in classes.

“The problem is the education’s interrupted, we just can’t keep the status quo right now,” said board member Kelley Baldwin. “The whole point of this year, was just to be flexible, re-evaluate as things go along. … Just doing nothing is not an answer.”

Alvarez said that the thought of having to call a parent and say their child has to have a second 14-day quarantine would be very difficult, but it would also be hard on teachers.

Alvarez explained that keeping up with students who are quarantined while also teaching their in-person students is already beginning to strain teachers. The difference between keeping up with 11 percent for a day or two of illness versus doing it with that 11 percent for the extended 14-day time, is where it becomes problematic.

Board member Rob Sparks agreed saying, “If you go to the hybrid model it puts students back on the same playing field.”

McKim stated that this would put students at a 40 percent reduction in education.

“How are you going to make it up?” he asked.

Albrecht said that class structure will change. An example she gave was that sustained reading in class or videos likely won’t be used during the in-person class periods.

McKim mentioned this would be changing a policy for only 11 percent of the student population and then asked if there will be expectations for teachers as well as students regarding the days off.

“There would be expectations,” Alvarez said.

Grispino said he was going to vote ‘No,’ because he disagrees with the “hypocrisy of the social distancing mandates.”

“I think we’re chasing our tails and a poor quarantine law,” he said.

“We feel like it’s a good-faith effort to keep in-person instruction alive and still keep things going that kids enjoy participating in and cut down on the quarantines,” Albrecht told the board.

In her note to parents she said, “There are things in life we cannot control. And things we can. It’s not a perfect situation, and these are challenging times. I’ve only asked one thing of you: to be flexible. We’ll get through it.”

“There are kids that are pretty stressed out and worried about getting quarantined or getting COVID. And we have a lot of students going to our counselors."