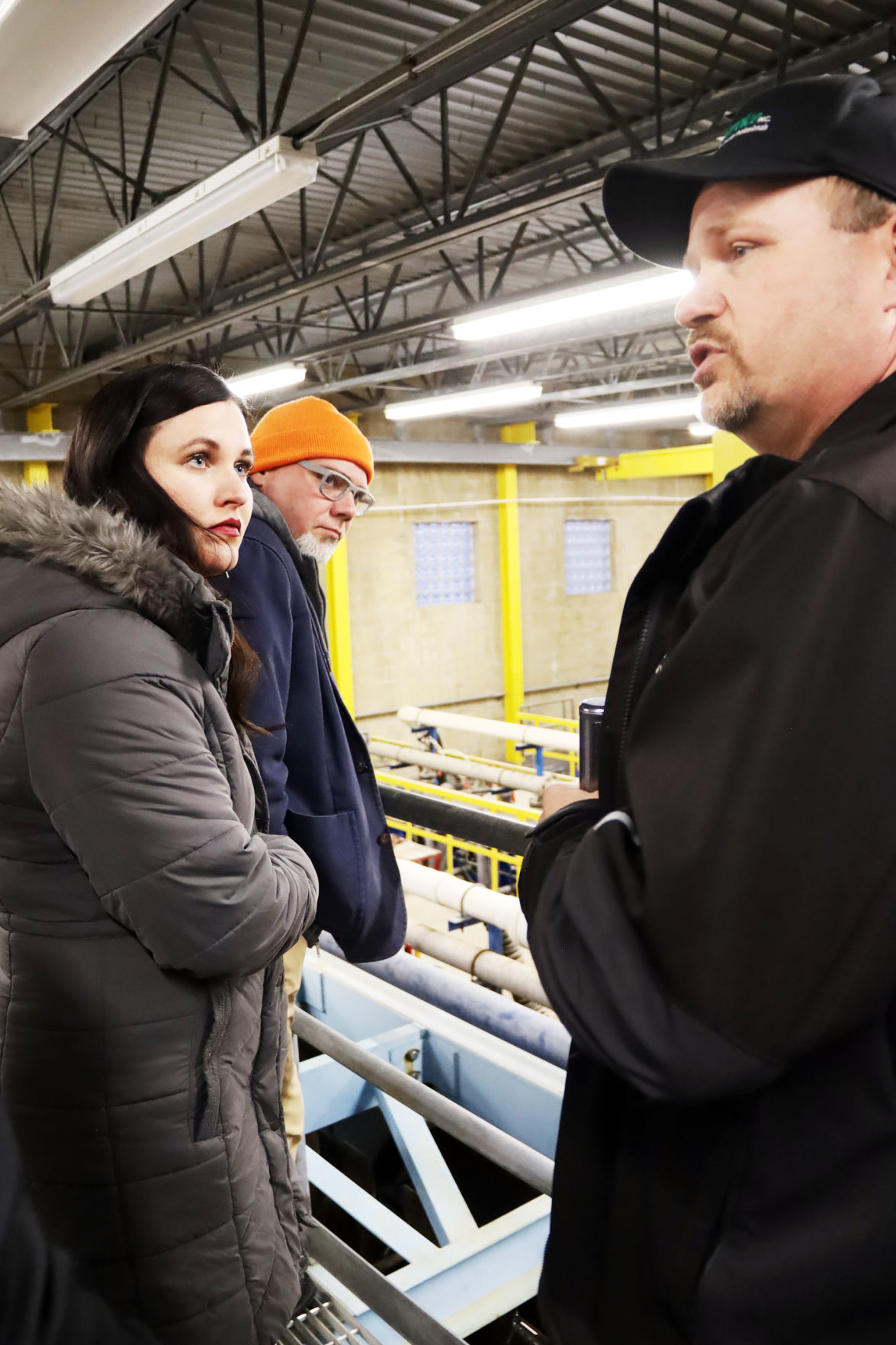 On the left, Maryville Mayor Rachael Martin and City Council member Matt Johnson listen to George Hulet, Missouri Region Manager for PeopleService, right, during a tour of the Maryville water treatment plant Monday evening. City Council members typically tour the facility every few years to ensure that each council member has done it at least once. 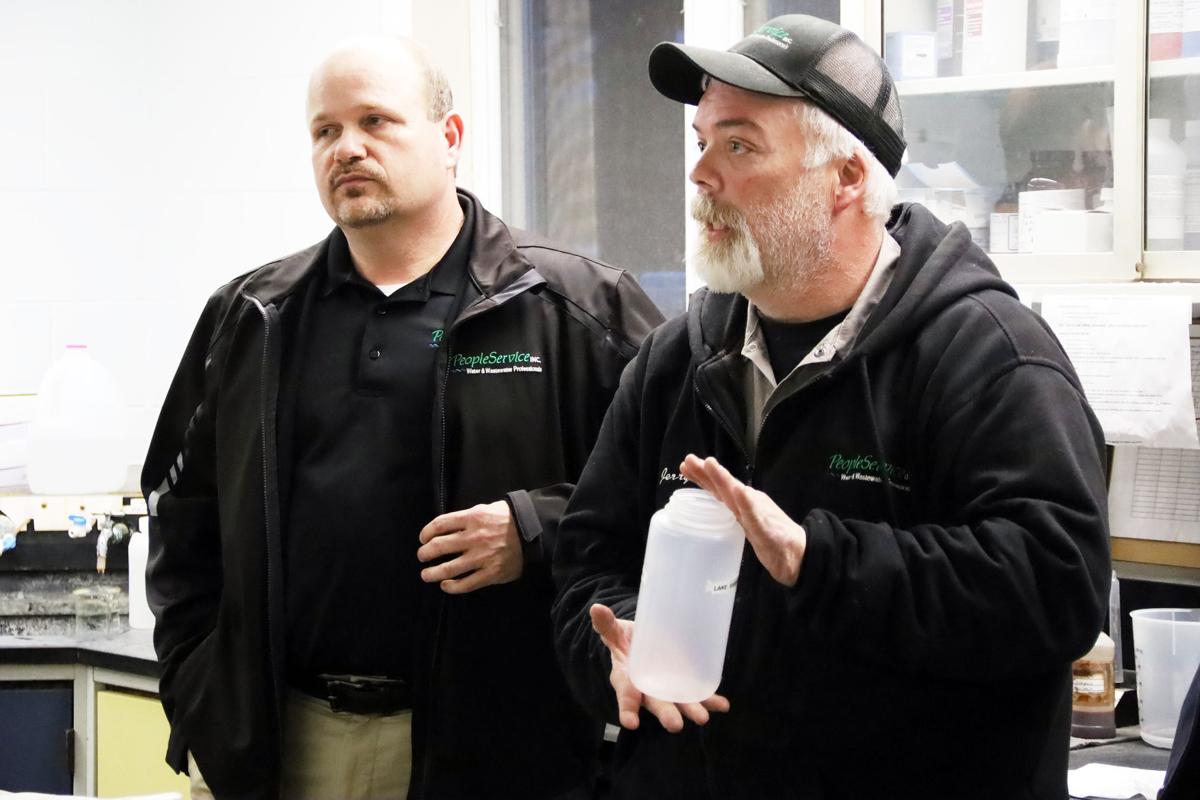 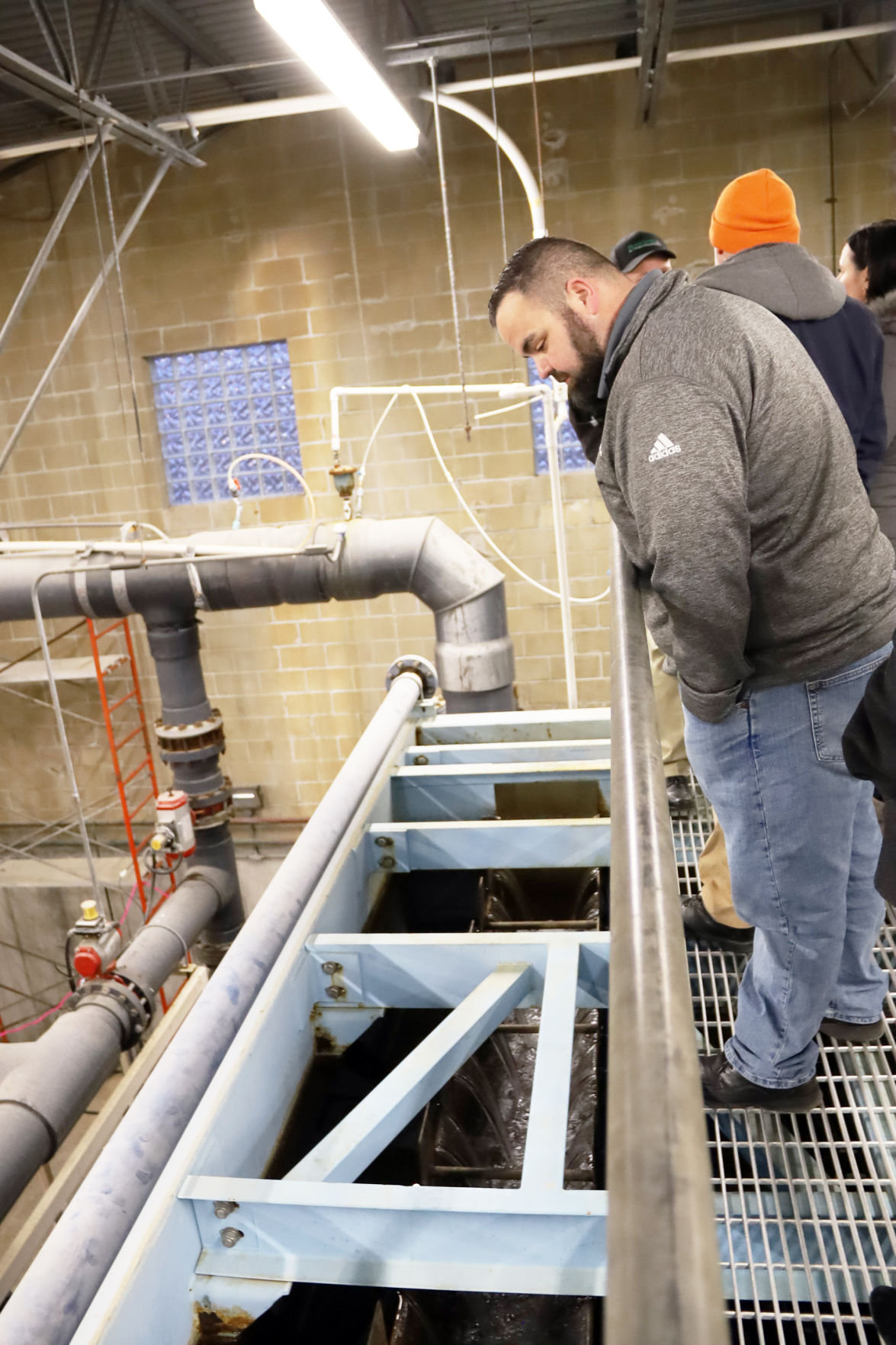 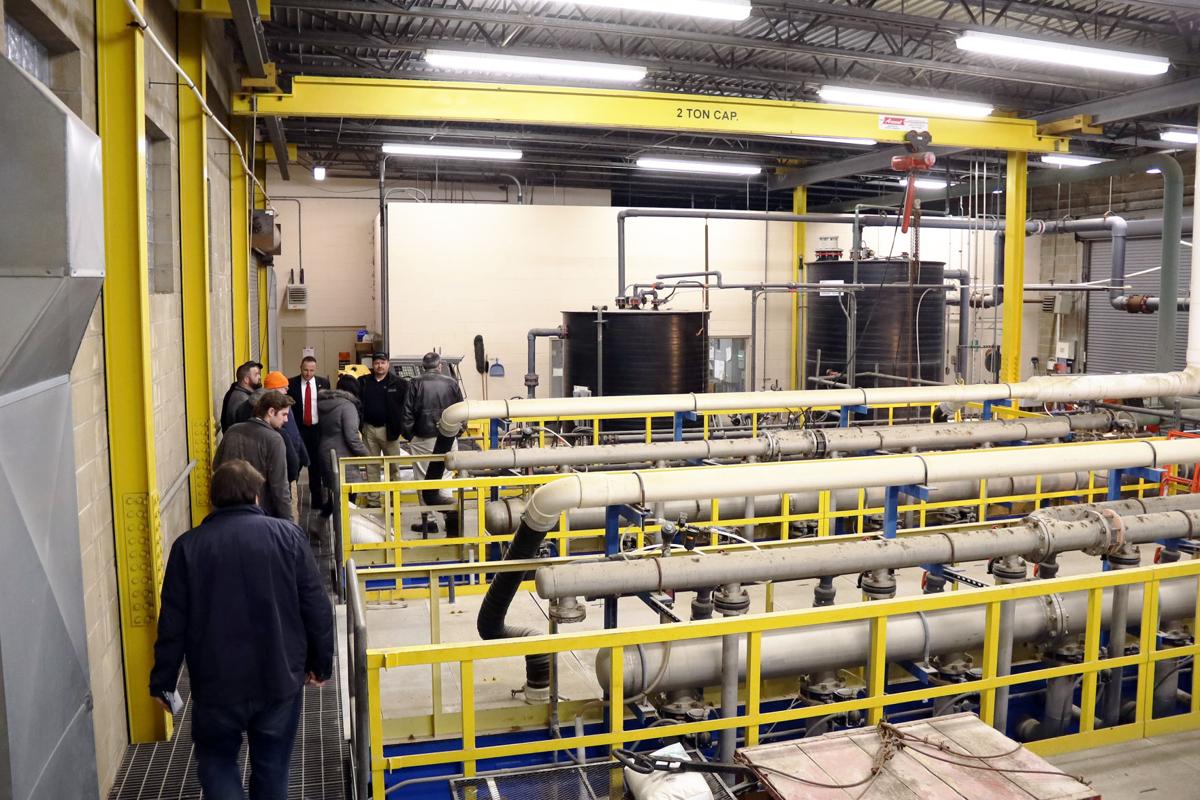 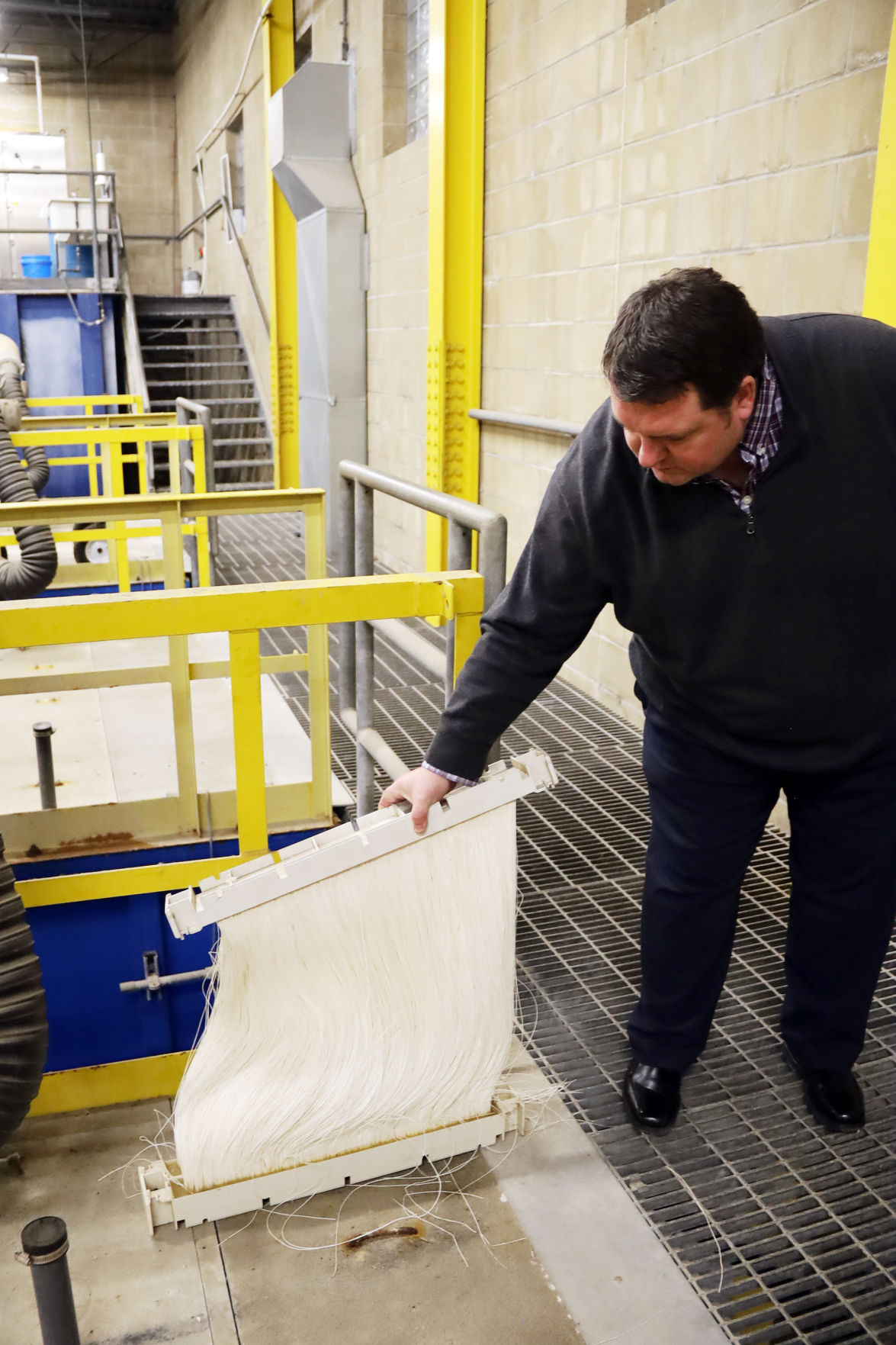 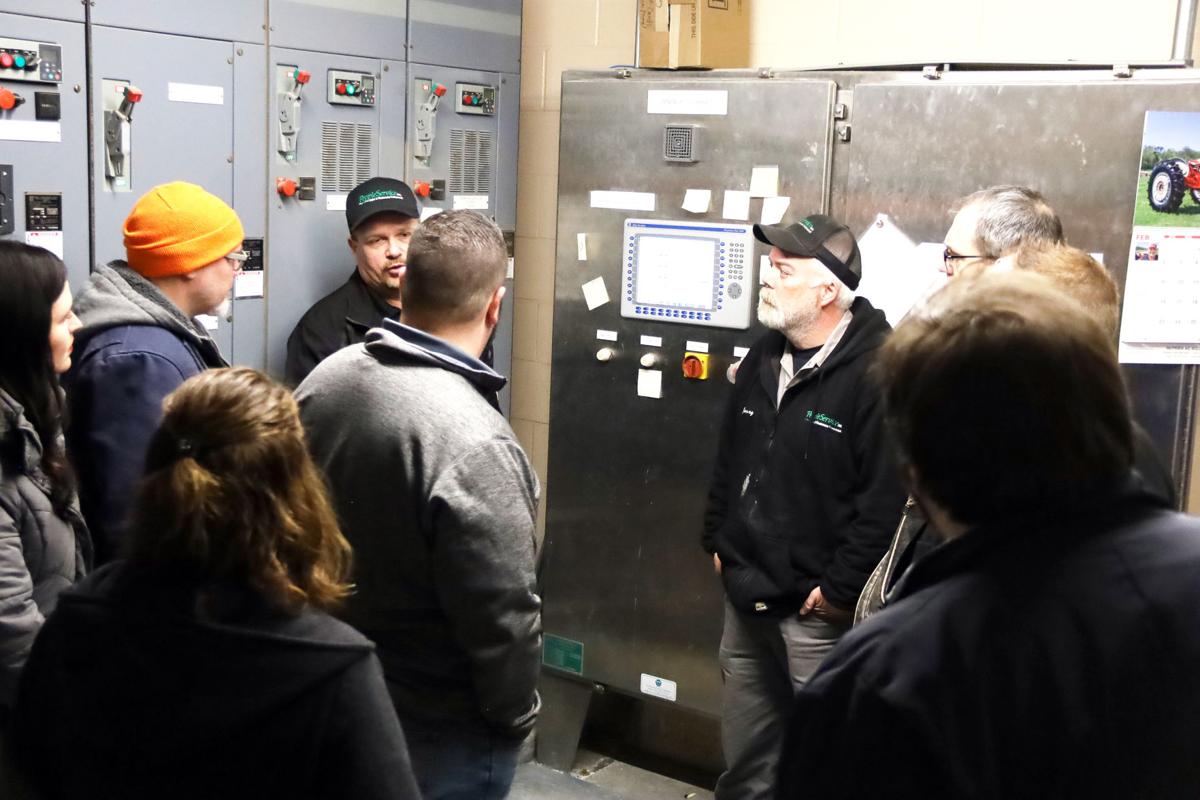 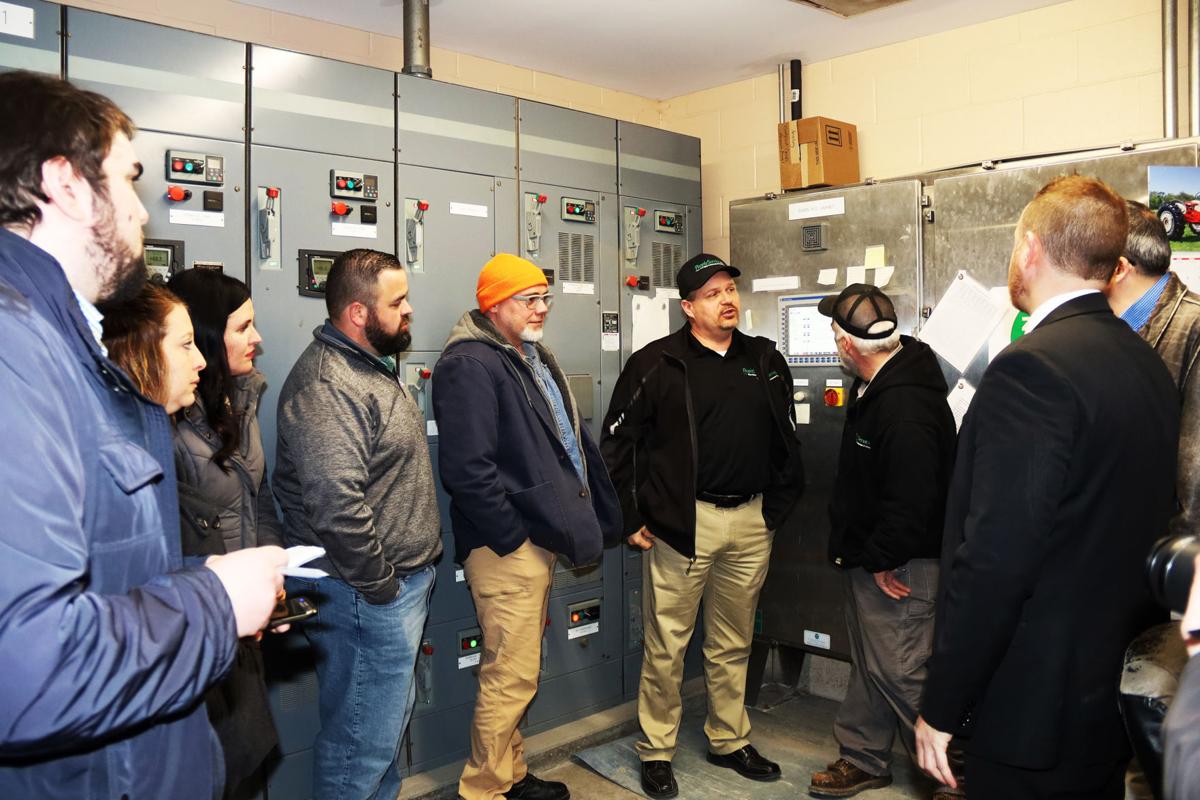 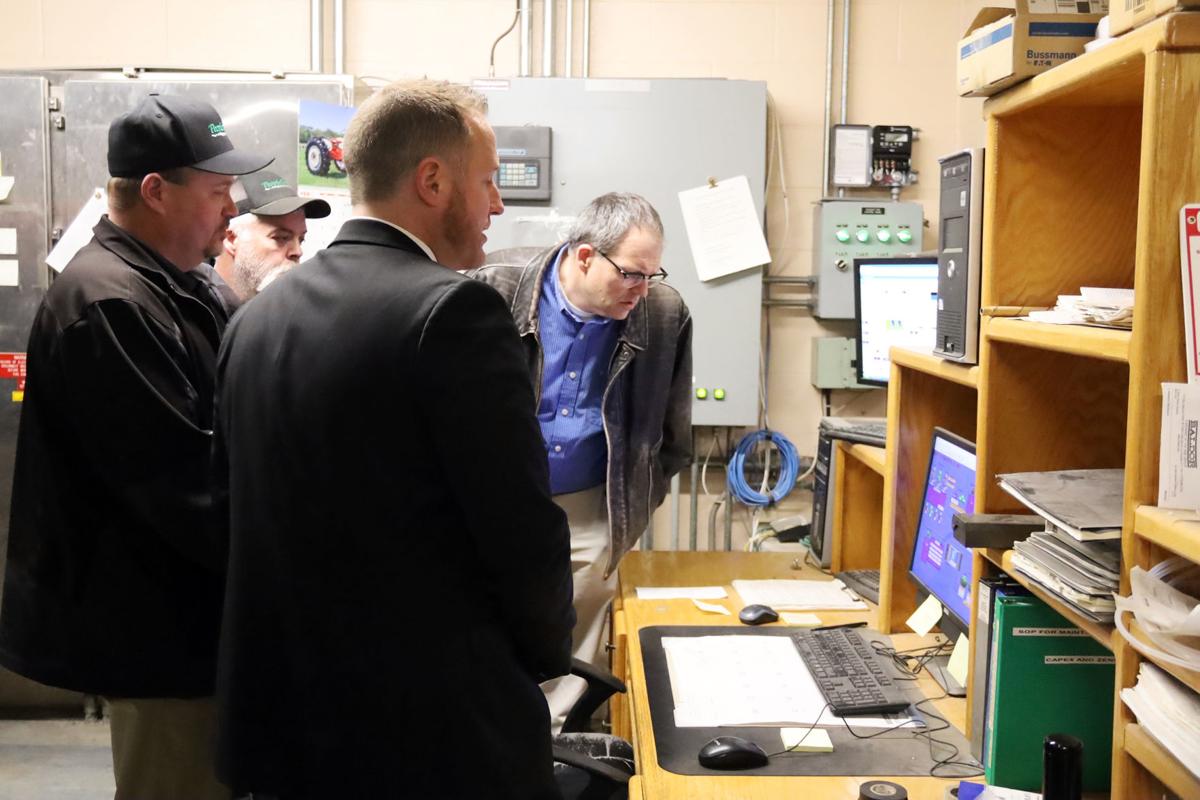 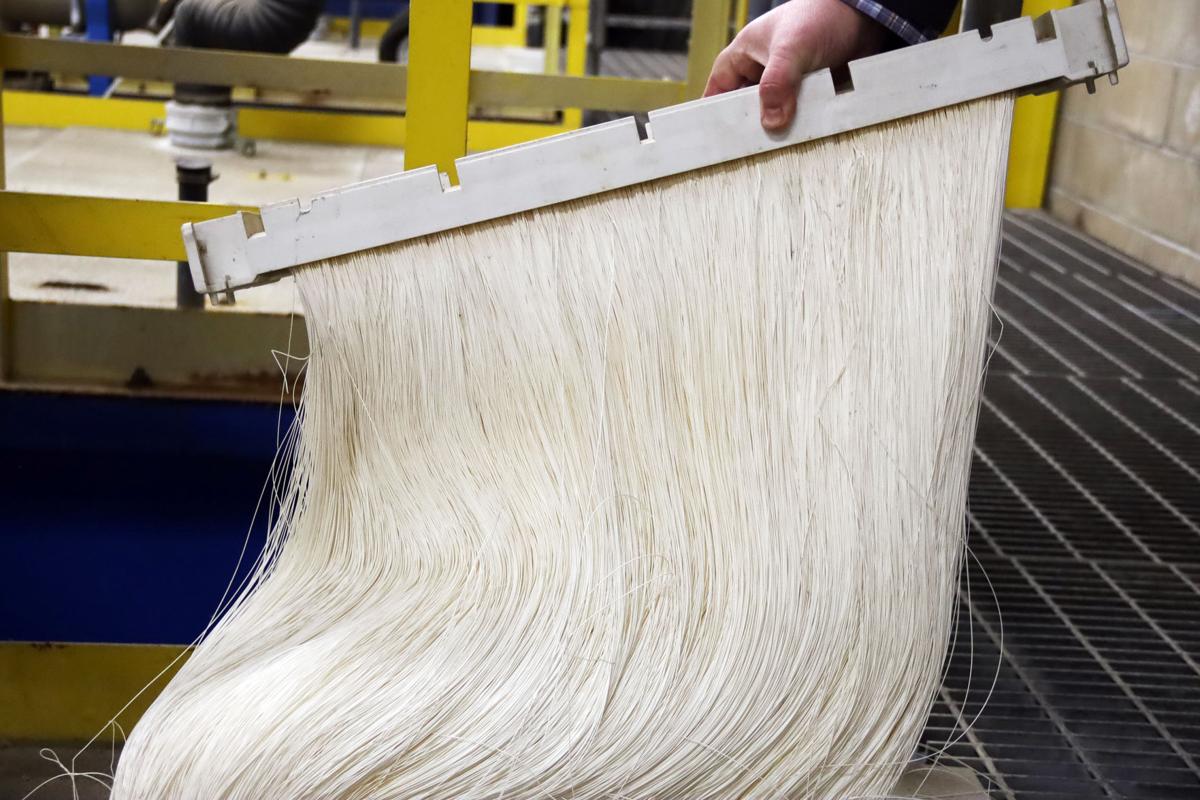 Membranes like this one use negative pressure to force water through what are actually fine, hollow, straw-like tubes that filter out any particles too large to enter, leaving only water. The membranes currently in use are two years past their recommended lifespan, and new ones are set to be installed this summer. 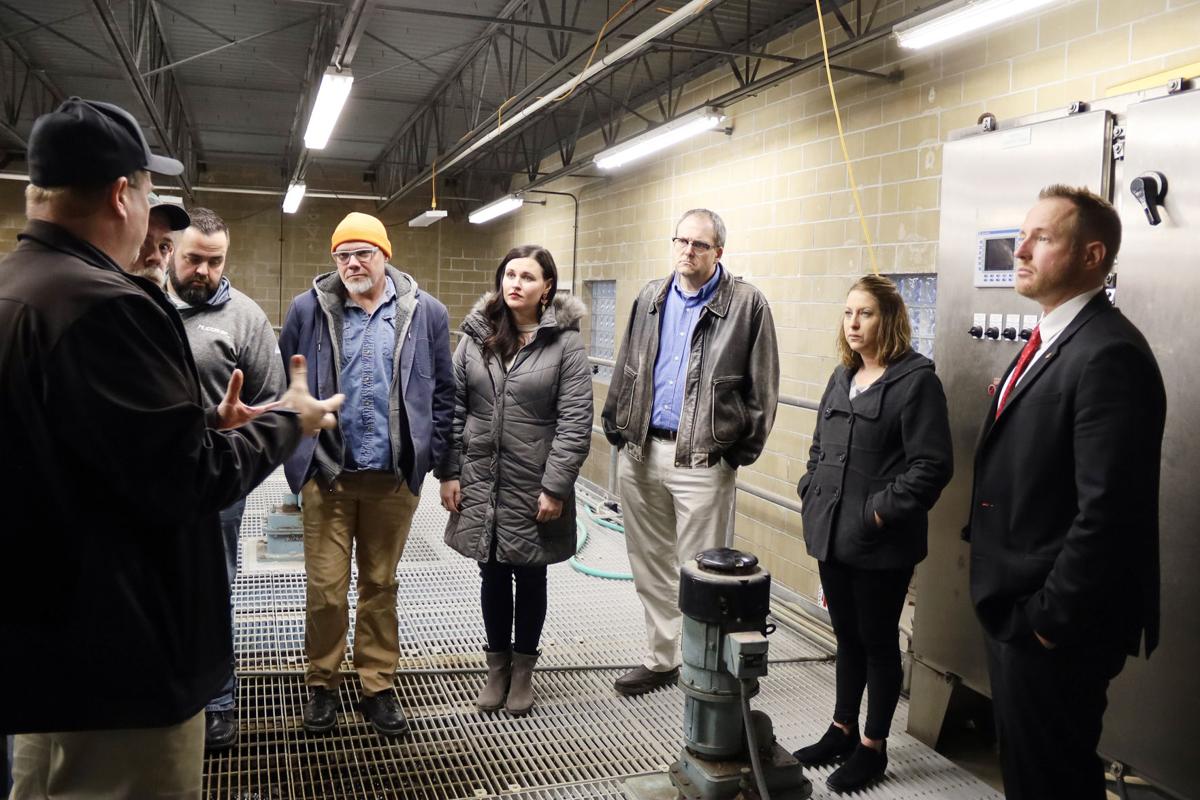 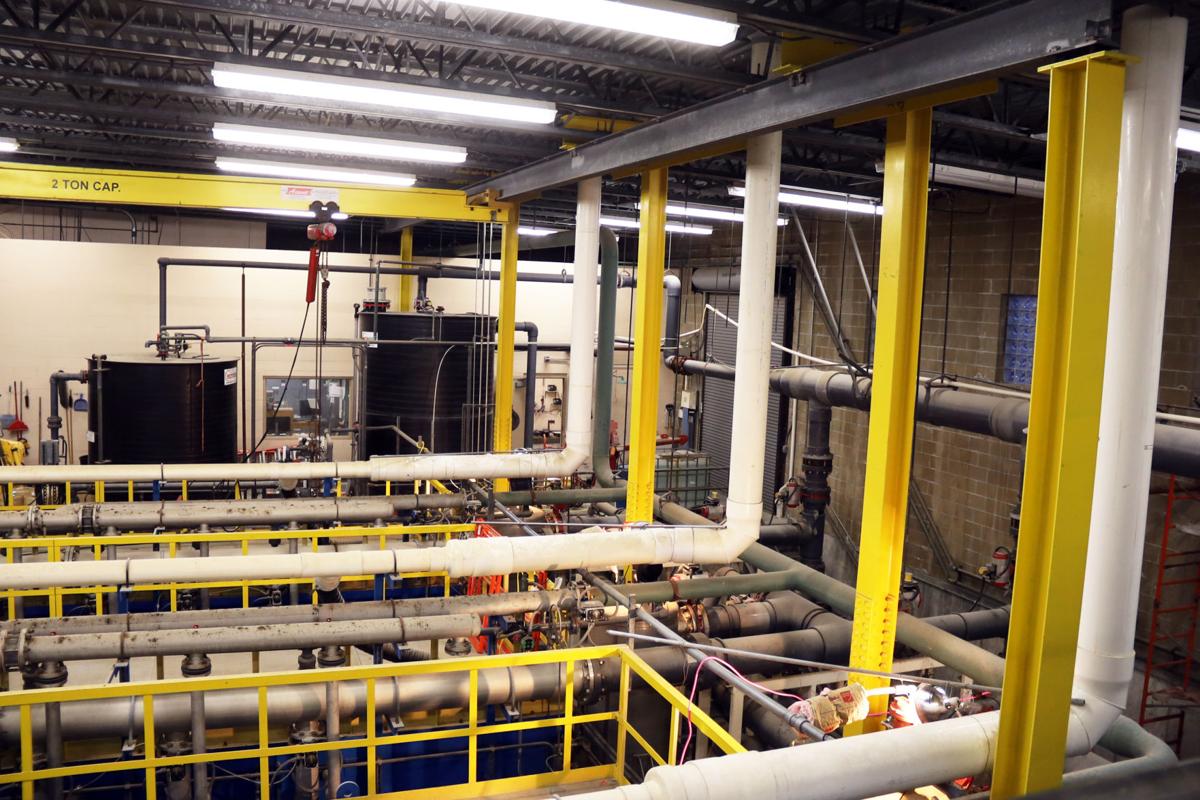 Inside the Maryville water treatment plant, which City Council members toured Monday evening. City officials are considering future options for overhauling the water treatment system, including an addition to this facility, where the water filtration membranes are housed, that would enable more pre-treatment with granular activated carbon at a price tag of about $6.6 million.

On the left, Maryville Mayor Rachael Martin and City Council member Matt Johnson listen to George Hulet, Missouri Region Manager for PeopleService, right, during a tour of the Maryville water treatment plant Monday evening. City Council members typically tour the facility every few years to ensure that each council member has done it at least once.

Inside the Maryville water treatment plant, which City Council members toured Monday evening. City officials are considering future options for overhauling the water treatment system, including an addition to this facility, where the water filtration membranes are housed, that would enable more pre-treatment with granular activated carbon at a price tag of about $6.6 million.

MARYVILLE, Mo. — City Council members toured the Maryville water treatment plant Monday, getting a firsthand look at the facility as they face a crossroads of possible futures for the city’s drinking water.

Following high levels of cyanobacteria — sometimes called blue-green algae — found in samples taken from Mozingo Lake last month, city officials have put long-term water treatment solutions at the top of their priority list. After a precautionary warning was posted at the lake to let residents know about the harmful effects of potential cyanotoxins, City Manager Greg McDanel outlined a three-pronged plan for how the city will approach overhauling the way drinking water is handled from the source to the tap.

One of the most expensive parts of that plan is likely to be a significant overhaul to or replacement of the existing water treatment plant.

George Hulet, Missouri Region Manager for PeopleService, the company that operates the city’s water treatment facility, told the council during the tour that the plant is outdated and would be unable to handle any more heavy-duty treatments that could be used to better address taste and odor issues in the future.

“Basically a new plant with conventional treatment is what I would prefer, if you’re asking for a wishlist,” Hulet said.

The current facility was originally built in 1959 using conventional methods of water treatment, as opposed to the membrane filtration systems that are used now. The main difference is that natural filtering substances, like sand, are used in conventional setups to help remove unwanted particulates as the water passes through it, leaving only the water on the other side. Membrane filtration allows for much smaller particles to be caught by the filter and uses different methods of vacuum and pressure to pass the water through the fine, hollow spindles that make up a membrane.

But membrane filtration can come with its own challenges. For example, when water is cold, like in winter months, it doesn’t flow as quickly. That can have a significant impact on how much water can pass through a membrane in a given amount of time, and, like at Maryville’s facility, can force the membranes to have to operate at higher negative pressures to move the water through the filters.

“The negative pressure, it’s quite a bit more than it normally would be with a warmer temperature,” Hulet said. “(Because) that is an automated system, if it feels like it’s in jeopardy of hurting itself — if you will — it’ll shut down. So somebody has to be able to manually operate it, and then somebody else has to be able to be running a test every two hours to make sure the plant’s operating correctly.”

When new membranes are installed this summer, Hulet estimated they could shave off 2-4 hours to produce the same amount of water as the current membranes, which have been in use for nine years — two years longer than their recommended lifespan.

City officials were quick to point out multiple times that the membranes do not affect the taste or odor of the water, and that the water has always remained safe to drink.

Hulet did say that the plant has had some success in eliminating the taste and odor issues, though, estimating that it’s been “over 30 days” since any aesthetic issues were detected in water leaving the facility. He did caution that immediate results may not have been apparent for everyone since the existing water in the system had to be used and then replaced by water without aesthetic issues.

“This is a problem that people don’t understand: When you make a change (at the water treatment plant), it takes a little bit of time to see it out there,” he said. “It takes days to see.”

Patience will likely also be required for long-term infrastructure additions to overhaul the city’s water system.

Although building such a facility was suggested by PeopleService in 2018 when the company warned city officials that the current plant had reached the limits of safe amounts of chemical treatments to the water, the city opted for lake treatments instead to address the source water while evaluating possible options for a new water treatment plant. That method did work until 2019, when complaints about taste and odor resulted in more frequent treatments, and then the cyanobacteria bloom last month that has moved the city’s water system to the forefront.

But Maryville’s situation is far from uncommon. Attending the Great Plains and Midwest Harmful Algal Bloom Workshop hosted by the EPA and the University of Kansas earlier this month, Assistant City Manager Ryan Heiland said that 78 percent of all lakes monitored by state or federal governments in the EPA’s Midwest region — Iowa, Kansas, Missouri and Nebraska — have dealt with a harmful algal bloom similar to the one in Maryville.