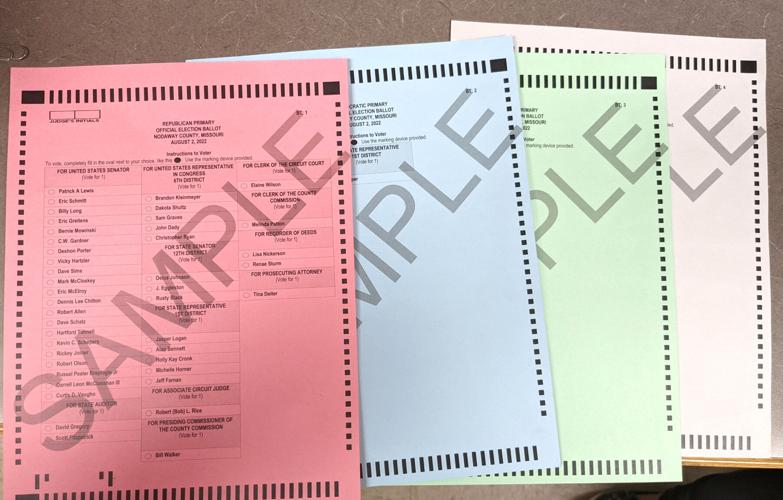 Initials made by election judges on ballots at the First Christian Church in Maryville inadvertently interfered with timing marks used by machine tabulators to read ballots, resulting in delays in the vote count. 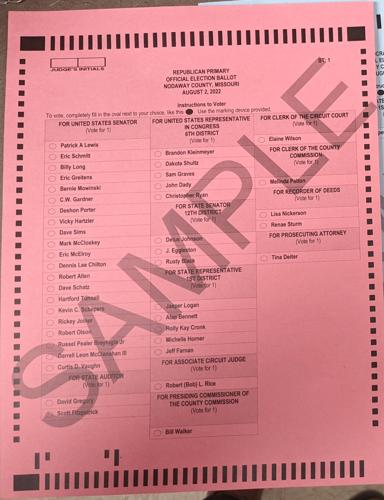 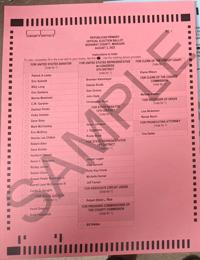 MARYVILLE, Mo. — A bipartisan team of election judges will manually count, and in some cases have re-marked, ballots cast at one of Nodaway County’s largest precincts after errant marks on the ballots delayed counting on Tuesday night.

Below are unofficial election results for the Aug. 2, 2022, primary election released by the Nodaway County Clerk's office. Up-to-date statewi…

Nodaway County Clerk Melinda Patton told The Forum on Tuesday that initials marked by election judges on some ballots cast at the First Christian Church in Maryville inadvertently made the ballots unreadable by the tabulation machine.

Before handing ballots over to voters, one election judge from each major political party — or a judge from one and another independent — verifies the blank ballot is correct and initials near the top of the page.

The boxes for judges’ initials are just below what are called “timing marks” — the innocuous black rectangles that frame the edges of every ballot.

Tabulation machines like the ones used by Nodaway County scan ballots and record the results internally. Timing marks are used to indicate what kind of ballot has been submitted into the machine — for example, a Democratic or Republican ballot — and then the tabulation machine looks for the ovals that have been filled by the voter at specific locations on the page relative to the timing marks. The combination of the ovals' locations and the timing marks indicates to the machine how to record the votes.

But if the timing marks are unreadable, the machine returns an error and will not accept the ballot.

Patton said that two election judges at the Polk B&C precinct had signed their initials on some ballots in a way that inadvertently touched or crossed a timing mark — rendering the ballot unreadable by the tabulation machine.

On several such ballots shown to The Forum by Patton, the interfering marks were barely noticeable — making the issue difficult to figure out in the first place.

Patton said the tabulation machine at the First Christian Church shut down around 12:30 p.m. after repeated attempts to submit ballots that returned errors. While she, staff and election personnel worked on the problem, voters simply cast their ballots manually, inserting their marked ballots into a secure slot to be stored in the machine and counted later.

When replacing memory cards and replacing the machine itself with a backup didn’t fix the issue, Patton said she sent a photo of a willing voter’s ballot to the machine’s vendor, Elkins-Swyers. Support staff there spotted the judges’ initials as the likely culprit.

Normal operations at the precinct resumed a little after 3 p.m., Patton said.

Because the machines used by the county allow for easy auditing of the paper ballots themselves, Patton said her staff and election judges are able to count the ballots without too much trouble — but it will take much longer.

After the polls closed Tuesday, in a plan endorsed by the Missouri Secretary of State’s office, election personnel ran the 405 morning ballots through the tabulation machine and went through each ballot that had been cast manually during the early afternoon.

Under the supervision of a bipartisan team of election judges, ballots where judges’ signatures seemed to interfere with timing marks were set aside and reproduced on new, clean ballots. Then all ballots were set to be run through the tabulation machine as normal. The original ballots will be kept in a sealed, secure container to refer to in the future if there are any questions about the reproduced ballots, Patton said.

On Wednesday, a different team of bipartisan judges will conduct a manual hand-count of each ballot cast at the precinct all day to ensure the accuracy of the machine count, Patton said.

Patton praised the election workers at the precinct whom she said stayed calm and pivoted voters to a new process on the fly that ensured the integrity of each ballot.

Although some voters on-site were upset or anxious about having to submit their ballot manually, Patton said that she hoped volunteering as much information and transparency about the process as possible would help assure voters that their votes are being counted accurately.