There are no services available.
You are the owner of this article.
Edit Article Add New Article
You have permission to edit this article.
Edit
Welcome, Guest
Home
News
Sports
Life
Opinion
Community
Obituaries
Classifieds
Event Calendar
About Maryville
1 of 4 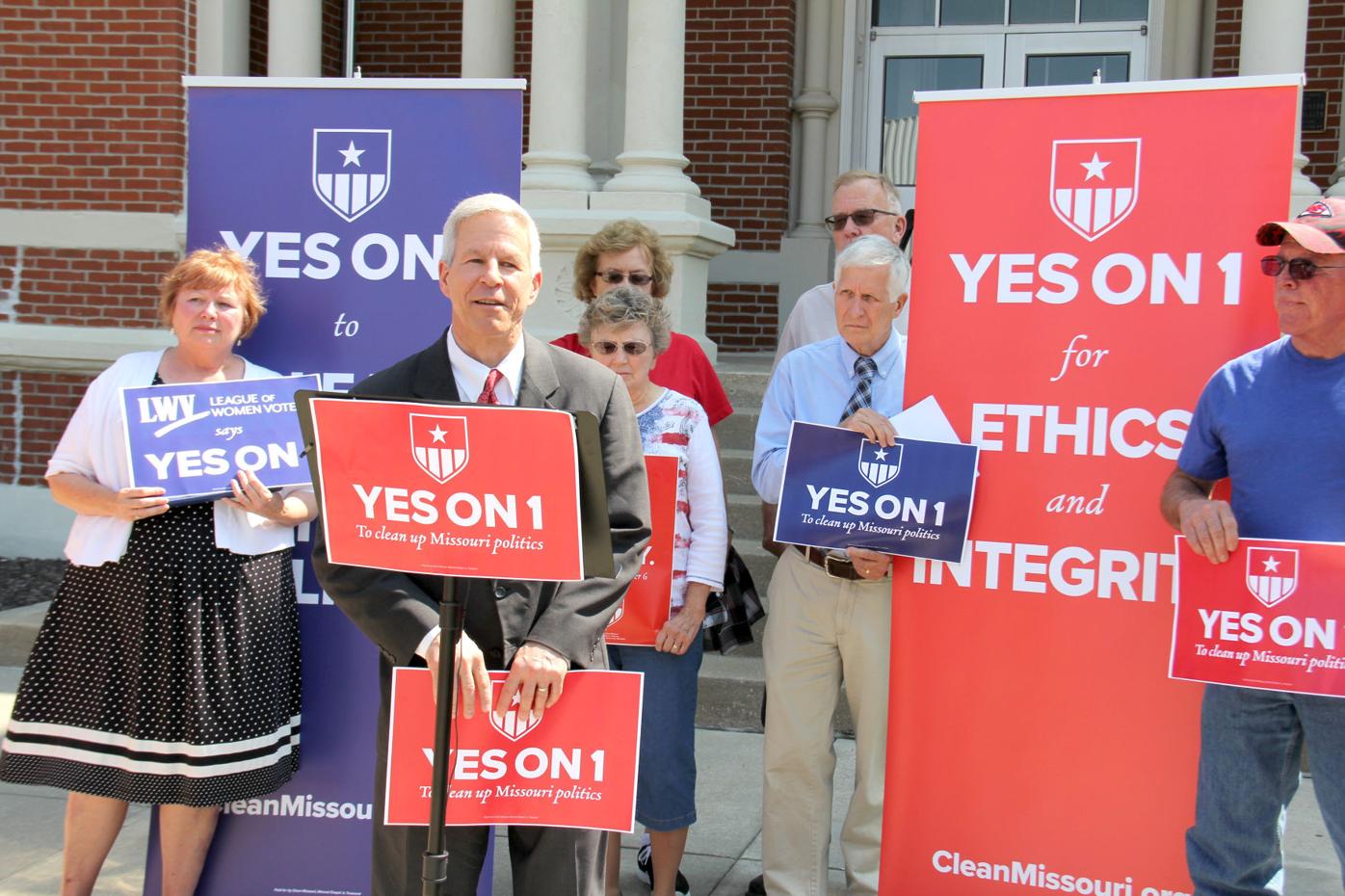 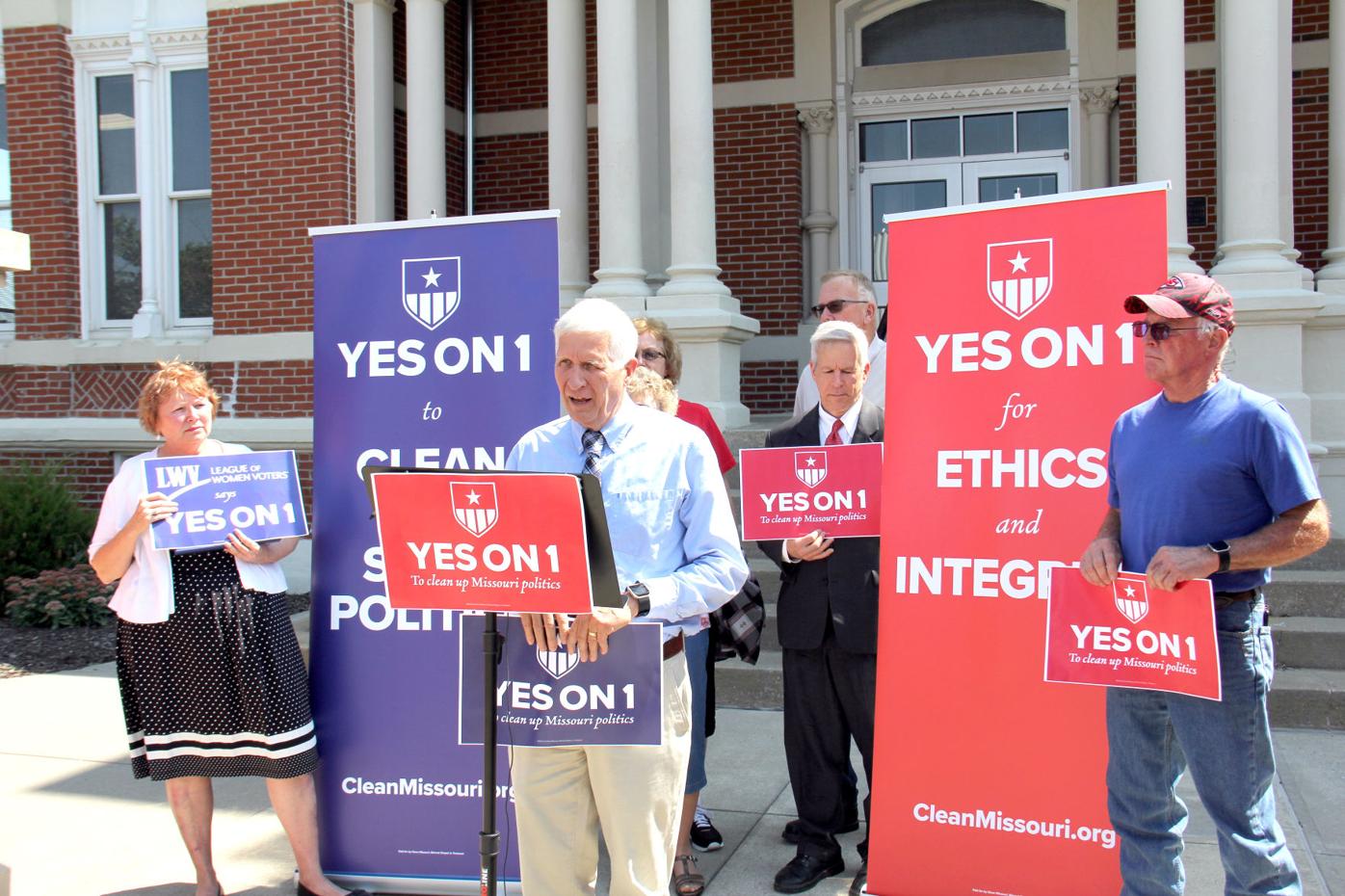 Pastor Scott Moon of the First United Methodist Church speaks in support of the Amendment 1 ballot issue coming up in the Nov. 6 general election. 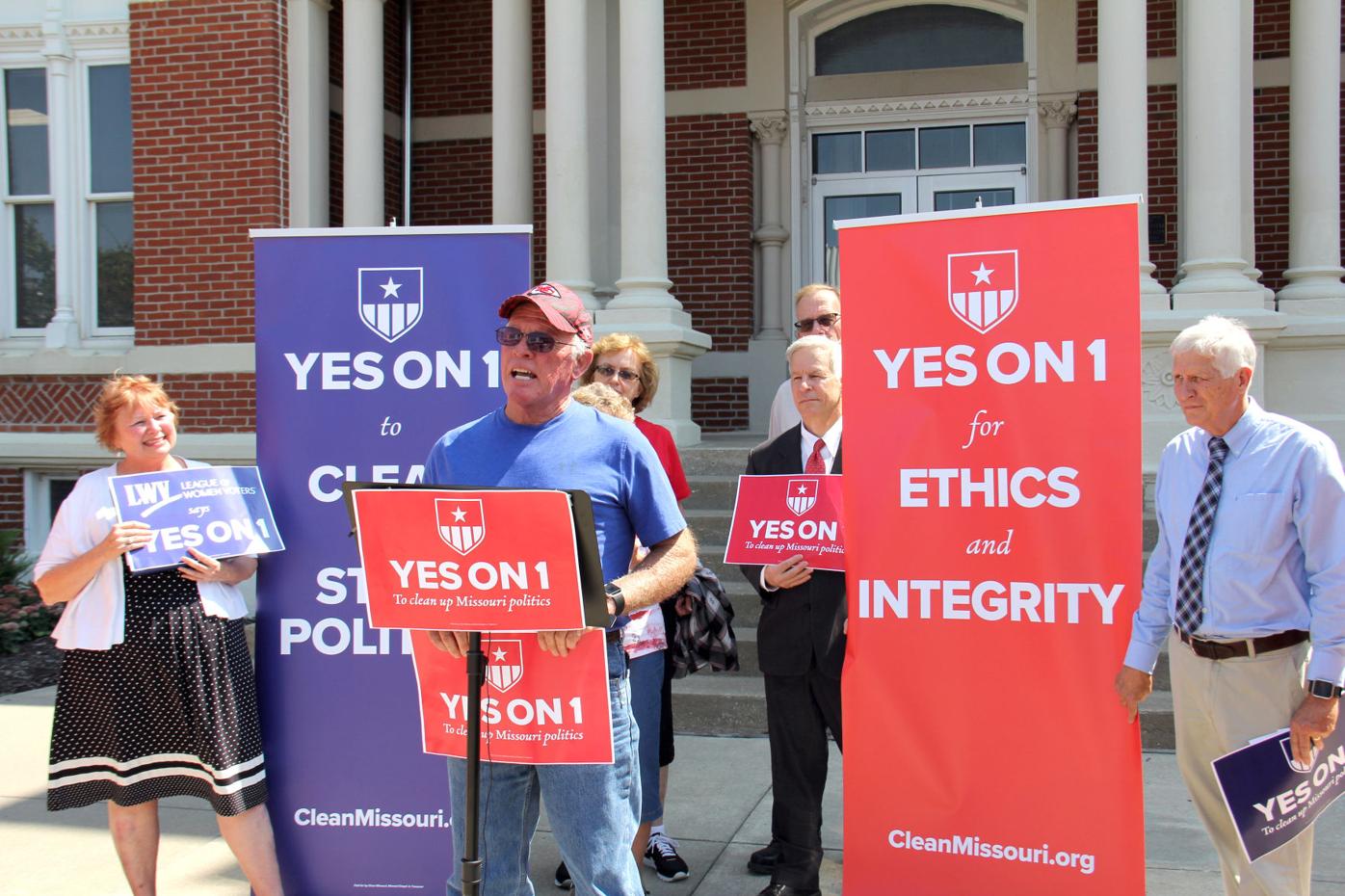 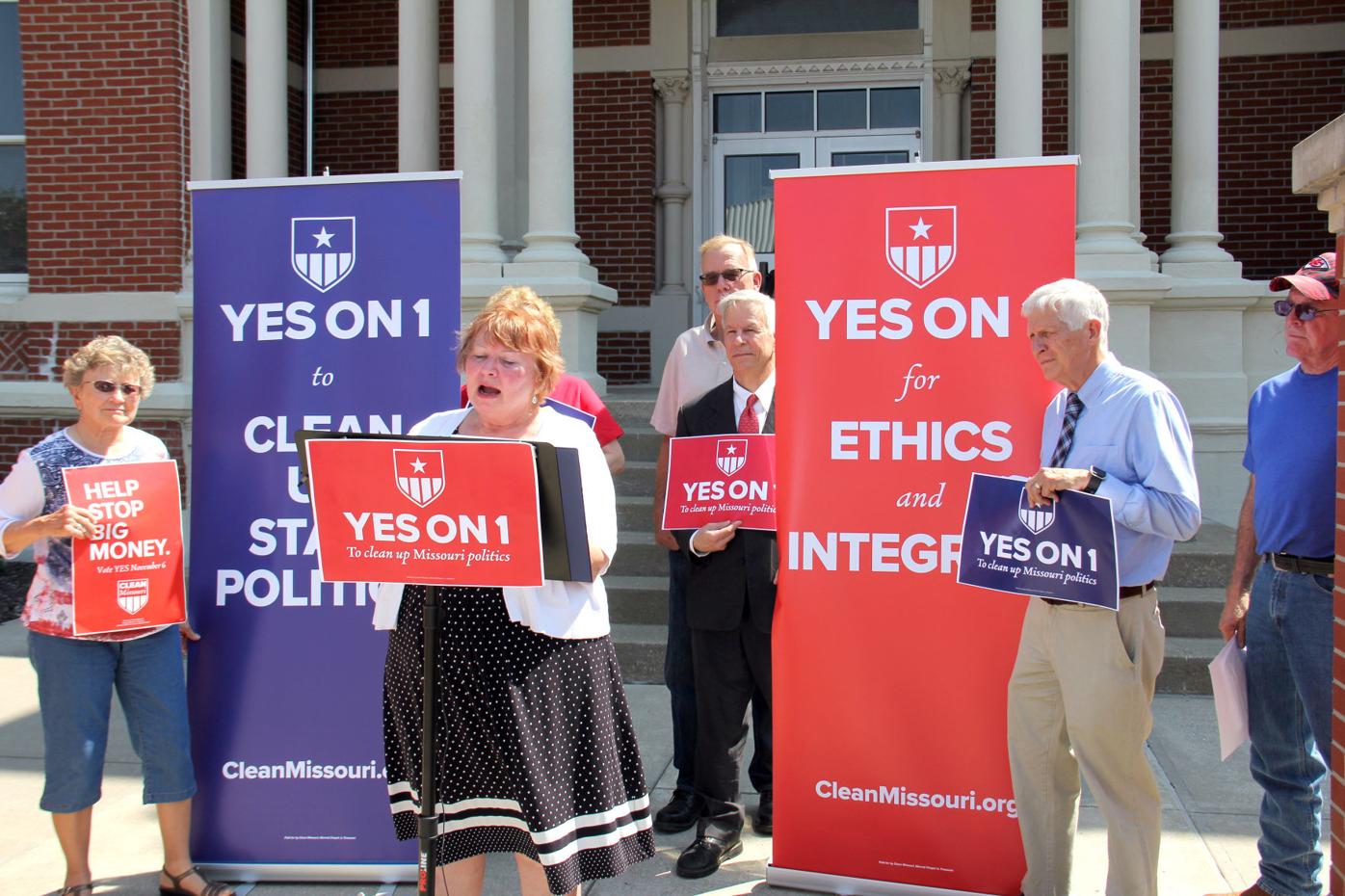 Cheryl Barnes with the Missouri League of Women Voters explains why she and the league support the Amendment 1 ballot issue.

Pastor Scott Moon of the First United Methodist Church speaks in support of the Amendment 1 ballot issue coming up in the Nov. 6 general election.

Cheryl Barnes with the Missouri League of Women Voters explains why she and the league support the Amendment 1 ballot issue.

MARYVILLE, Mo. — At a noon press conference held Monday several members of northwest Missouri communities endorsed Amendment 1 or “Clean Missouri,” that will be on the Nov. 6 general election ballot.

Held at the Nodaway County Courthouse, Missouri Sen. Rob Schaaf, R-St. Joseph, along with Cheryl Barnes with the League of Women Voters of Missouri; and Rev. Scott Moon of the First United Methodist Church in Maryville spoke in support of the ballot issue.

Sen. Schaaf explained that he’s been in the legislature for 16 years, and that the biggest problem he’s seen has been the legislature doing the wishes of special interests and of the lobbyists instead of those of the people and to their detriment.

“I’ve watched as we’ve taken up issues designed to help one special interest over another, perhaps to make more money in the market place, to advantage one group over another and it’s taken up valuable time that we could be spending working on issues that are important to all of the people, so that’s why I’m here supporting Clean Missouri,” he said.

He gave examples of some of the bills taken up on behalf of special interest groups: a bill to help big alcohol fight their competitors, big tobacco over little tobacco, or who gets to hang equipment from telephone poles.

“I didn’t go to Jeff City to deal with those kinds of issues that nobody knows anything about,” Schaaf said.

He spoke in favor of the $5 limit on lobbyist gifts and redistricting so incumbent politicians are no longer protected by gerrymandered districts.

“(Ronald Reagan) said on the anniversary of D-Day that ‘Democracy is worth dying for, because it’s the most deeply honorable form of government ever devised by man,’” Schaaf said. “There are a lot people who have died for our democracy, but at this point in time, the affect of big money is corrupting it. We need to clean it up and protect the democracy that so many people have died for.”

After the press conference, Schaaf explained slightly more in depth how the redistricting will help with regard to those incumbents.

“Right now, the districts are drawn kind of in the back room under the secrecy of darkness and nobody knows exactly what process is used and who made the decision and why,” he said. “Clean Missouri causes there to be a state demographer that is nonpartisan and the mechanism of choosing that state demographer is as fair as it can be.”

He said the maps have to be drawn in such a way to minimize the difference in wasted votes between the two political parties.

He explained that wasted votes are those that are made for the non-winners, but also those that are made in excess of the number of votes needed for the candidate to win. He explained that “packing and cracking” is used to pack voters into a district, so that there’s more of their votes wasted or “cracking” splitting them up so none of that party get elected at all so all of the votes are wasted.

“So all of that is created to waste votes among the opposing party,” Schaaf said. “But we could draw maps scientifically, using criteria that are outlined in Clean Missouri such that the difference between the parties and their wasted votes is as small as possible. It’s a mathematical mechanism and it’s been supported by people like John Danforth, Gov. Kucinich, Arnold Schwarzenegger. The mechanism will also be transparent so everyone can see how the lines are drawn.”

He went on to explain a citizen’s commission will look over the entire process.

“It’s going to be a giant improvement over what we have now,” Schaaf said. “These kinds of things show that the process right now isn’t very good, it needs to be fixed and I think clean Missouri is a good start.”

From the local perspective, The Rev. Scott Moon with First United Methodist Church in Maryville explained that he endorses the amendment because his denomination has taken a proactive stance on campaign finance reform and for the proper choosing of representatives and setting of districts.

“We come to this position, really, from an ethical and moral perspective as well as a political perspective,” he said. He went on to explain that as an individual who as a member of the United Methodist clergy is duty-bound to help those within his congregation, and also generally within the public to encourage persons to look seriously at the ways in which campaign finance reform, in particular, can be addressed.

“Very seldom do you have an opportunity such as we have this coming November to actually vote on an amendment that can make a difference,” Moon said. “I’ve looked at this myself. I personally can commend this for ratification and will be voting for this when it comes in the fall.”

He encouraged others to look at the initiative and apply their consciences before the upcoming general election.

Cheryl Barnes with the League of Women Voters of Missouri said she and her organization believe that lobbyists, big donors and small groups of political insiders have too much control and influence over Missouri state government, but it doesn’t have to be this way.

“(Amendment 1) is an opportunity to make our state government more transparent and limit the power of lobbyists and big money donors on our legislature.”

Rick Oswald, a fifth-generation northwest Missouri farmer and former president of the Missouri Farmers Union spoke on behalf of the ballot initiative.