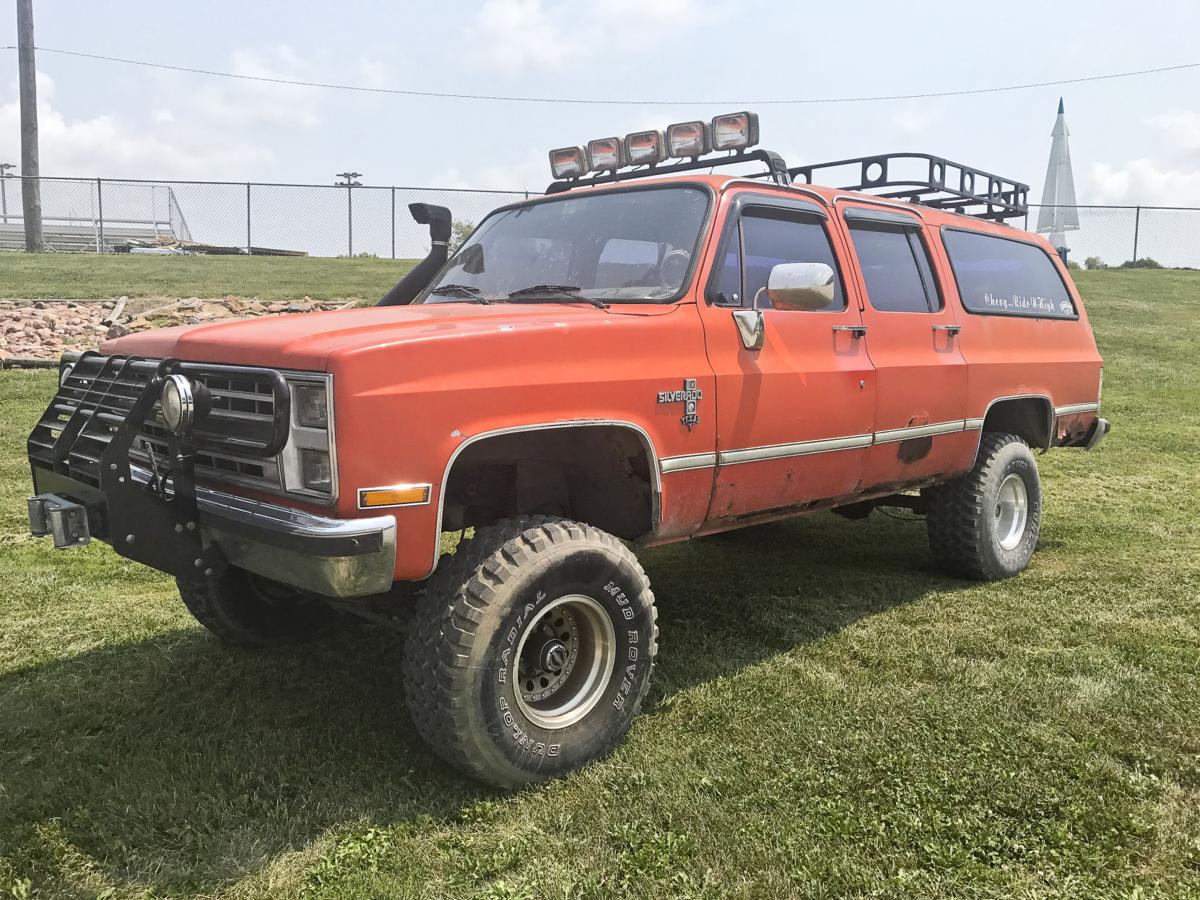 A 1987 GMC Suburban sits outside of the football stadium at West Nodaway High School. The vehicle was one used in the filming of Dante’s Peak, a 1997 movie starring Pierce Brosnan and Linda Hamilton.

This screenshot from Dante’s Peak shows a GMC Suburban navigating its way through a downfall of ash after a volcano eruption in the 1997 movie. The vehicle used in the movie is now owned by a West Nodaway High School student.

A 1987 GMC Suburban sits outside of the football stadium at West Nodaway High School. The vehicle was one used in the filming of Dante’s Peak, a 1997 movie starring Pierce Brosnan and Linda Hamilton.

This screenshot from Dante’s Peak shows a GMC Suburban navigating its way through a downfall of ash after a volcano eruption in the 1997 movie. The vehicle used in the movie is now owned by a West Nodaway High School student.

BURLINGTON JUNCTION, Mo. — When Dylan Carden turned 16 earlier this week, he and his dad started a search for his first vehicle.

Little did they know they would be bringing a piece of cinematic history with them to northwest Missouri. Carden, who will be a junior at West Nodaway in a matter of weeks, was initially looking for a sportier car.

What he and his dad, John, stumbled upon on Craigslist turned out to be quite a find.

Staring back at them on the computer screen was a 1987 GMC Suburban. But, not just any four-wheel drive.

This one had a starring role in Dante’s Peak, a movie that came out in 1997 and grossed more than $178 million.

The father-and-son duo made the trip to Council Bluffs, Iowa, Tuesday afternoon to get the vehicle and bring it to Missouri.

Along with the purchase came a letter from Cinema Vehicle Services. Signed by Ray Claridge, president of the North Hollywood, California, business. The letter states ‘This vehicle, 1987 GMC Suburban, (VIN redacted) was used in the filming of Dante’s Peak, featuring Pierce Brosnan.’

The two got the truck and were only able to drive it a short while before needing to stop due to it overheating. Instead of risking any damage, the Cardens got some help from Dylan’s friends, David Hull and Levi Hoyt, who brought a trailer.

The vehicle and group returned at 12:30 a.m., Wednesday morning, which gave Dylan Carden a few hours of sleep before heading to football practice at 7 a.m.

The plan is for the truck to be checked out to see what fixes need to be made to get it on the road.

“It has a few little issues that need to get lined up as far as motor-wise,” John Carden said. “He’s talked about driving it for a little while to see if it belongs in a rightful place.”

The question that will come up soon is, “Do you restore it to movie-like condition?” Or leave it as it is with the natural bones intact but with some changes?

Obviously being born after the movie premiered, Dylan Carden had to do some research on the movie but quickly learned of the history behind the movie and the stars in it, like Brosnan who gained international fame playing James Bond in the Agent 007 movies.

“It is freaking awesome just thinking about it,” Dylan Carden said.

John and Dylan did a lot of research before purchasing the vehicle, which included finding photos of the vehicle in the movie to make sure it was legit.

The car has been used by a family as an everyday-vehicle and they made some alterations to it so it isn’t as authentic as it was when it was on the big screen.

Window tinting has been added. A handful of letter scripts were added to the side window and back window, while a University of Texas logo is on the front fender near the GMC logo.

The original taillights were replaced, but they were stored in the back of the suburban.

“It was kind of neat,” John Carden said. “We were looking for a Mazda and ended up with a movie star.”

The car has the Safari Snorkel, which is noticeable when the suburban goes across a river during a scene in the movie.

From information gathered by the Cardens, there were only four such suburbans used in the filming and this is the only known survivor.

The Cardens tried to find a DVD copy of the movie on the way home, but came up empty. However, the movie will be on the Sundance Channel this upcoming Sunday and Monday, which will give the younger Carden a chance to see the film which grossed $18 million on its opening weekend.