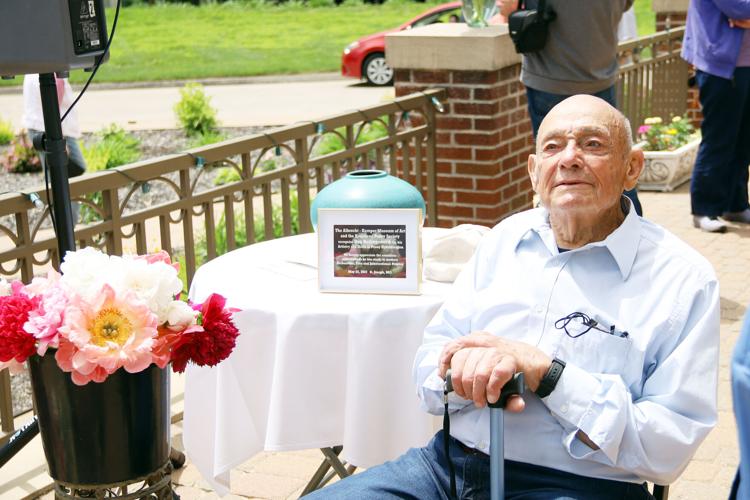 Don Hollingsworth, a Maryville peony-breeding master, talks with advice seekers and well wishers after being presented a lifetime achievement award from the Albrecht-Kemper Museum of Art and the Heartland Peony Society on Sunday, May 22, at the museum in St. Joseph. 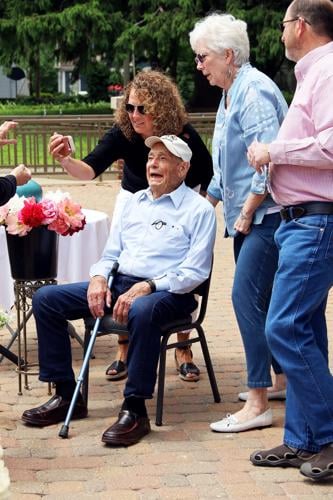 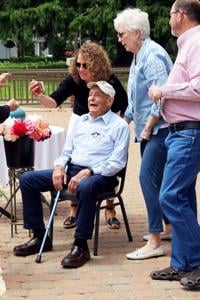 Don Hollingsworth poses Sunday for a photo with his granddaughter Gena Hill and daughter Landra Loos at the Albrecht-Kemper Museum of Art in St. Joseph. 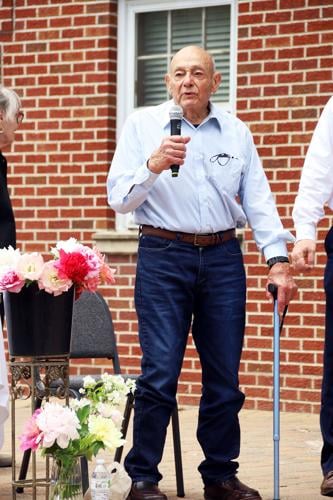 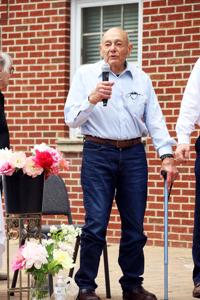 Don Hollingsworth stands to thank the crowd of familiy and friends who gathered Sunday at the Albrecht-Kemper Museum of Art to recognize his work in the field of peony hybridization. 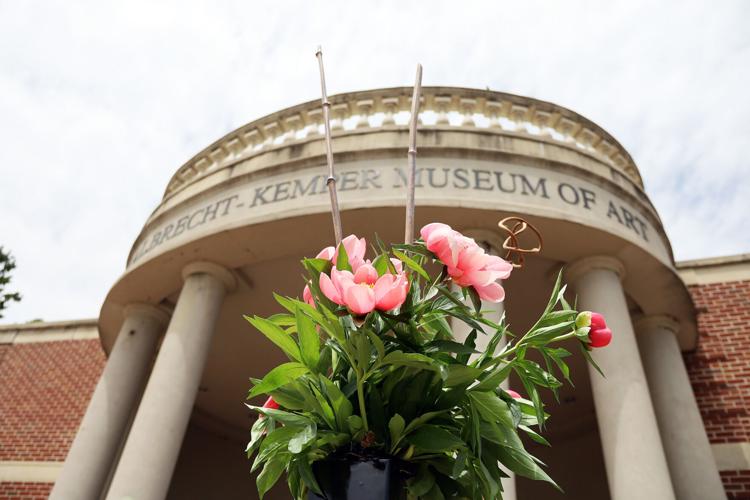 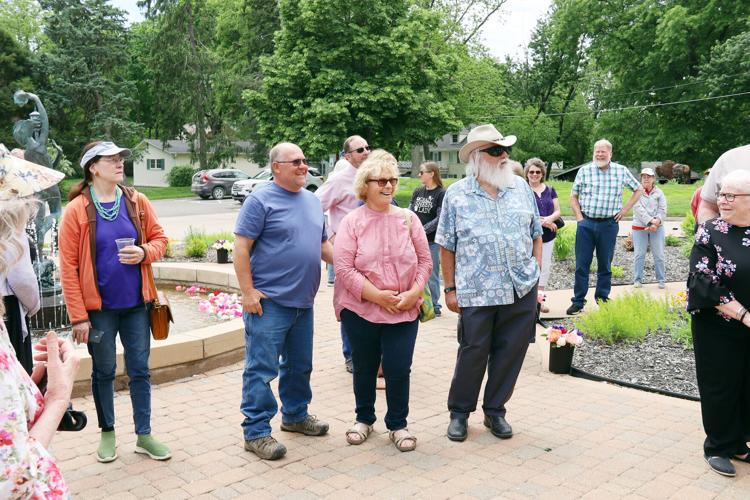 Grant Evans, Nancy Evans and Gerald Gerardy, Hollingsworth’s nephew, laugh as Don Hollingsworth mentions the work they do to keep him pollinating every day. 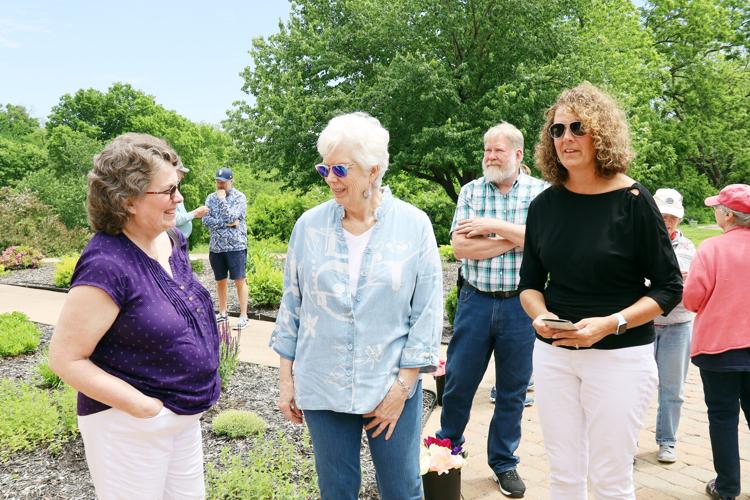 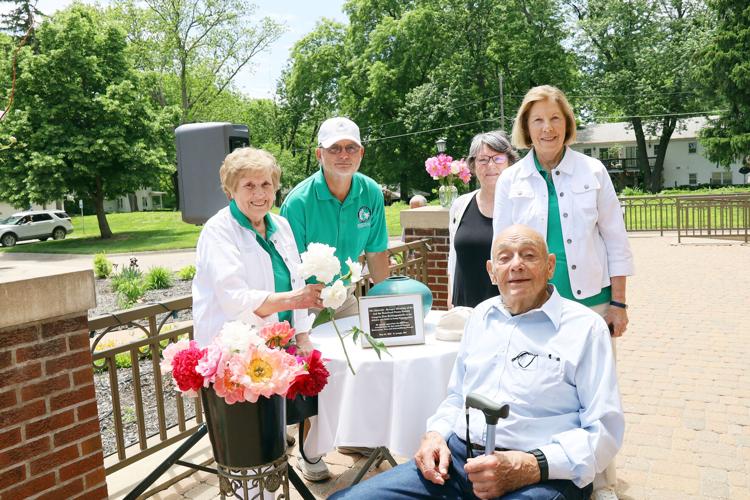 Don Hollingsworth poses for a photo with members of the Maryville Garden Club during Sunday’s award ceremony at the Albrecht-Kemper Museum of Art. Shown with Hollingsworth, front, are: JoAnn Espey, Marvin Myers, Cleon Curtiss and Sue Powell. 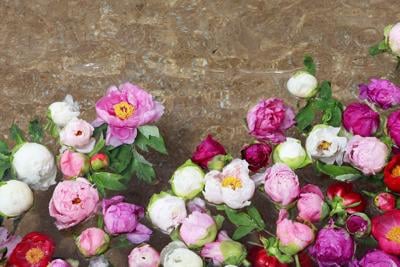 Don Hollingsworth, a Maryville peony-breeding master, talks with advice seekers and well wishers after being presented a lifetime achievement award from the Albrecht-Kemper Museum of Art and the Heartland Peony Society on Sunday, May 22, at the museum in St. Joseph.

Don Hollingsworth poses for a photo with members of the Maryville Garden Club during Sunday’s award ceremony at the Albrecht-Kemper Museum of Art. Shown with Hollingsworth, front, are: JoAnn Espey, Marvin Myers, Cleon Curtiss and Sue Powell.

ST. JOSEPH, Mo. — When local peony perfectionist Don Hollingsworth began hybridizing the plants in 1958, he had no idea he’d still be doing it 64 years later, or that he’d receive a lifetime achievement award for his work in the field. On Sunday, the Albrecht-Kemper Museum of Art and the Heartland Peony Society recognized Hollingsworth for his artistry and skills in peony hybridization.

He made his first crosses in 1967 and since then put out about 80 varieties of peonies to the market while self-employed on a Maryville farm where he still lives. He sold the business in 2013, but is still focused on his favorite part of the peony business, breeding.

On Sunday, surrounded by his flowers at the AKMA, Hollingsworth sat in the sun, which he said felt great, and handed out advice as friends, family and flower enthusiasts walked up to congratulate him.

Several sought specific advice like, “How do I get more blooms?” But many were just happy to see him out and about and to take photos with the 93-year-old floral aficionado.

“We’re very proud,” said LaDonna Benne, Hollingsworth’s daughter. “(He deserves) all the recognition he can get. He’s just been dedicated to peonies for decades.”

Eric Fuson, executive director of the AKMA, said that it wasn’t long after first introducing Hollingsworth to the museum that the museum received a gift of peonies that were just planted last fall in the main entrance garden.

“You guys know as well as anybody that for them to bloom their first year is pretty rare,” he said. “All of them have, which is another testament to this guy right here.”

Fuson told The Forum that the museum is a place where people can gather to not only view fine art, but share skills, passions and information. Featuring Hollingsworth’s peonies outside offers a beautiful experience upon entering the museum full of shared community artworks.

“Our gardens are just as much as an artistry as what we have inside,” Fuson said.

Working with the Heartland Peony Society and the Maryville Garden Club, the museum presented to Hollingsworth a lifetime achievement award, a lifetime membership to the museum and a large vase created by St. Joseph pottery artist David Harris, “who is kind of like the Don Hollingsworth of clay,” Fuson said.

Hollingsworth, standing with a cane, spoke briefly saying that he appreciated the attention very much, but said there are others who deserve recognition as well: Nancy and Grant Evans.

“They’re very instrumental in me being able to be able to continue,” Hollingsworth said. “You know we’ve made more than 500 crosses this year, and that’s about 100 different matings. That wouldn’t have happened if Nancy wasn’t there every day to help make that work.”

Evans joked that it might be easier to list the things she doesn’t do, but said that she and Hollingsworth in a golf cart still traverse the farm making crosses. He tells her what to put on which ones and they create the breeds.

“We just go around and we do the pollinating,” she said. “… I’m sure there would have been someone else to do it if I didn’t, but he wouldn’t be doing all of it alone. … It is hard work.”

From grocery shopping to driving him to doctor’s appointments and calling the ambulance when necessary, Evans smiled when talking about her duties on the farm.

“We’re going to Ann Arbor to the American Peony Society in two weeks and I’ll be driving him there,” she said.

Evans continued, saying that Hollingsworth is very active and she knows he wouldn’t enjoy life without his work with the large flowers.

Sorry, there are no recent results for popular videos.