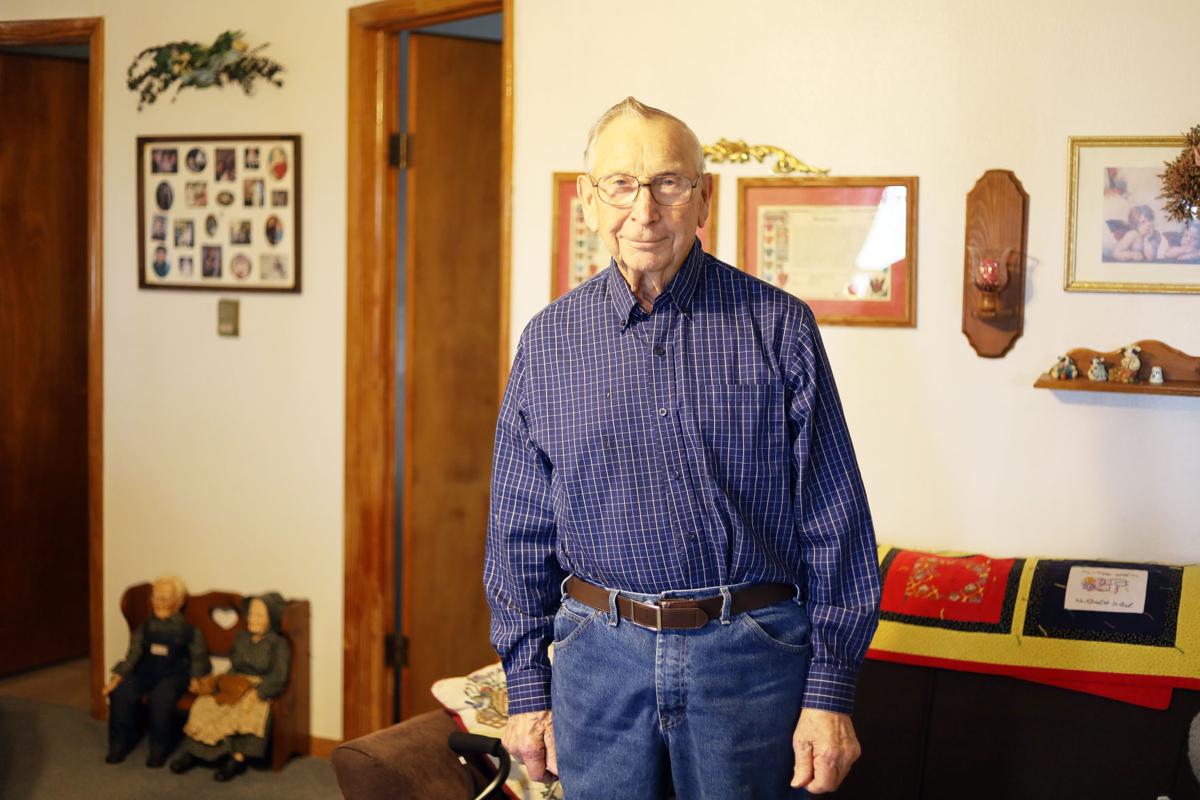 Charlie Roush, of Hopkins, stands Monday in his living room. Roush spent 65 years serving his community through auto body repair, but also in numerous other ways. 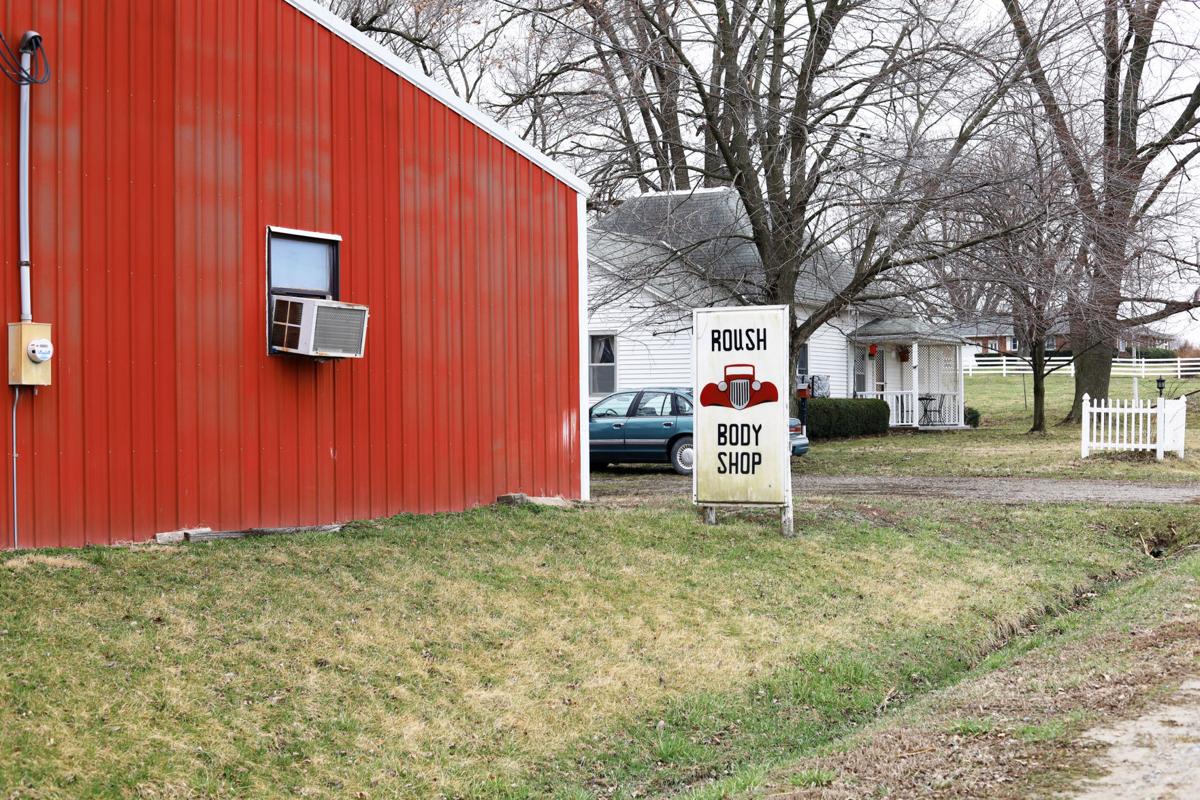 Roush Body Shop, shown Monday, closed in 2018, but owner Charlie Roush helps to keep his customers and community running by other means.

HOPKINS, Mo. — “‘You don’t want to wash cars all your life do you,’” Charles Roush, of Hopkins, recalled being asked in 1953. “So that’s how I got started into doing body work.”

In September of that year after graduating high school, Charles Roush began his auto body mechanic career by washing cars for the Bill Duke Pontiac dealership located where Walker’s Body Shop is now in Maryville.

After a few employee turnovers Roush was asked to switch jobs and just a few months later, Roush said the dealer consolidated stock in Independence, Missouri and closed up shop. Roush then started working in Hopkins at Rosecrans Chevrolet for $40 a week.

“That sounds crazy now, but in those days it wasn’t a big wage, but it was enough to scratch by living wage,” he said.

It was the first week of May in 1954 when Roush went up to start the job. Later that year, he married his wife Barbara, moved up to Hopkins and began to grow his family, eventually adding four children: Rick Roush, Darla Thompson, Deena Poynter and Tim Roush.

Just a beginner auto body man, Roush said he learned more and more on the job during his seven years and eight months at Rosecrans Chevrolet.

Eventually, an auto body worker at Glenn Woodruff and Erville Allison’s Ford dealership decided to go out west and Roush’s name came up as a possible replacement.

“They offered me a little more money,” he said.

For 21 years and 11 months, Roush said he worked on cars at the Ford dealership until it went out of business. He said Allison had already bought out Woodruff by that time and a man by the name of Paul Beason then purchased it.

Then, as a lot of the small town businesses at that time did, the dealership closed.

Roush, who needed to support his growing family, said he hated to uproot them, like he’d been moved around as a child.

“There were still things I missed out so much by not getting to stay in one place longer,” he said. “So if there was any way possible I wanted my kids to get to go to school in the same place.”

So he spoke with his banker and in January of 1983, Roush Body Shop opened in Hopkins and for 35 years until 2018, its namesake worked hard fixing cars to feed his family of six.

“We got to be members of the community,” he said. “People around Hopkins have known me long enough, they didn’t push too hard to finish up something.”

Roush said not having that pressure really helped him put his family first and the job second.

“He’s the dad every kid always dreams of having,” Roush’s daughter Deena Poynter said. She explained that after working a long day at the shop, Roush would take the time to stop and push her on a swing before doing anything else.

“It was that ‘You’re important enough I’m going to stop,’ and he did that for all four of us,” she said. “He was wonderful with all of us.”

Roush said the reason he got by so many years in the business was because he had “an awful patient wife. She understood that everything didn’t just go to five o’clock and cut off.”

However, because he was his own boss occasionally he said they got to knock off at 3 or 4 p.m. if they wanted to go watch his grandchildren play ball.

“Charlie is one of the greatest men I know,” said James Brown who worked for Roush. “I’ve never heard that man get angry.”

Brown worked in the body shop from 1989 until he graduated high school in 1991. While his career took a different path than he had originally wanted, doing auto body work, Brown said Monday that he learned a lot from Roush.

“He taught me a lot both from an auto body standpoint and (about) patience,” he said. “He’s the most patient man I know.”

As a member of the Hopkins community, Brown said Roush is always willing to visit with people and ready with a good word to say.

“He’s always been a positive member of the community, in the church,” he said.

Not only did he provide training for those students, but also two of his sons and four grandsons who worked during summers gaining experience.

While they didn’t all go into the auto body repair field, they did receive a lot of good knowledge about cars and customer service, Poynter said.

Roush not only kept community members mobile by way of his business, but moved himself easily throughout the community helping with local events in and around the area, including coaching little league for 17 years, while his sons were in the league.

He continued to coach for many years after they left. Poynter said he still hears from some of those men he coached back then.

“They talk about how they remember all the lessons he taught them,” she said. “It wasn’t just all about baseball.”

Poynter said Roush offered life lessons along with his time. She became a more accurate softball pitcher, thanks to her father’s help. Through his business Roush also donated to various organizations throughout the community, sponsoring teams and events.

Poynter said he also was incredibly involved in all the school activities in which she and her siblings participated.

“He never missed any of our … concerts, ballgames,” she said. “My dad would come to watch us cheer.”

Currently Roush still participates in Lions Club and is an elder emeritus at the First Christian Church in Hopkins.

Roush is very active in his church, joining just after he and Barbara were married. For years he was the custodian and later a youth leader at the church.

“I loved having my dad as my youth group leader,” Poynter said. “My dad was great, he was fun. The other kids loved him. He had these great messages, so I loved it.”

Steven Wainwright, current pastor at the First Christian Church in Hopkins, hasn’t known Roush for a long time, but believes he’s a true leader in the congregation.

“He has just a great love for his church and for his wife Barb,” he said. “He’s a very compassionate and caring person.”

Wainwright recalled when his mother died and Roush called on him not just once, but multiple times offering support.

“Even to this day I can’t really explain how he did it, you could just tell by inflection the care he had and the words he used that he was genuinely there to encourage and to support,” he said. “He’s especially loved in the church.”

Even in disagreement, Wainwright said, Roush has a palatable way to converse about difficult topics.

“We call him one of the patriarchs of the church in a sense that he really stands for the very best of what the church should be and can be,” he said. “He’s done well in his walk with the Lord. I think he’s a person who still seeks to be more and more like Jesus.”

In 2018, Roush was stopped amid work in his shop by a phone call that shuttered his business and changed his life forever.

In early December 2018, Poynter said her dad received a call from Dr. Rony Abou-Jawde’s office at the Mosaic Life Care Cancer Center in Maryville. She explained Dr. A.J. told him to immediately go to the emergency room at St. Luke’s.

“They just had discovered (through a PET scan) that cancer had eaten a lot of his bones away, especially through his neck,” Poynter said.

Poynter said if he had moved in the wrong way, he could have become paralyzed.

After a neck surgery, Roush was moved out of the ICU, contracted pneumonia three times, but eventually bested it too. He started cancer treatments and was able to go home in a wheelchair.

“Several times they thought not only would he not survive, but never thought he would walk,” she said. “At this point my dad is walking with just a cane. He is a very strong man. He is pretty much who he always was. He’s a little less ebullient, I guess you might say, but not a lot. He’s an amazing guy.”

Roush said he still usually has a side project vehicle he’s working on or thinking about in his free time since closing the shop.

“I’m not working on it very fast,” he said. “When I get back to a little better health I’ll go back out and play with it. … I guess the good Lord has something left for me to do. I’m still here and I’m thankful for the good years I’ve had.”