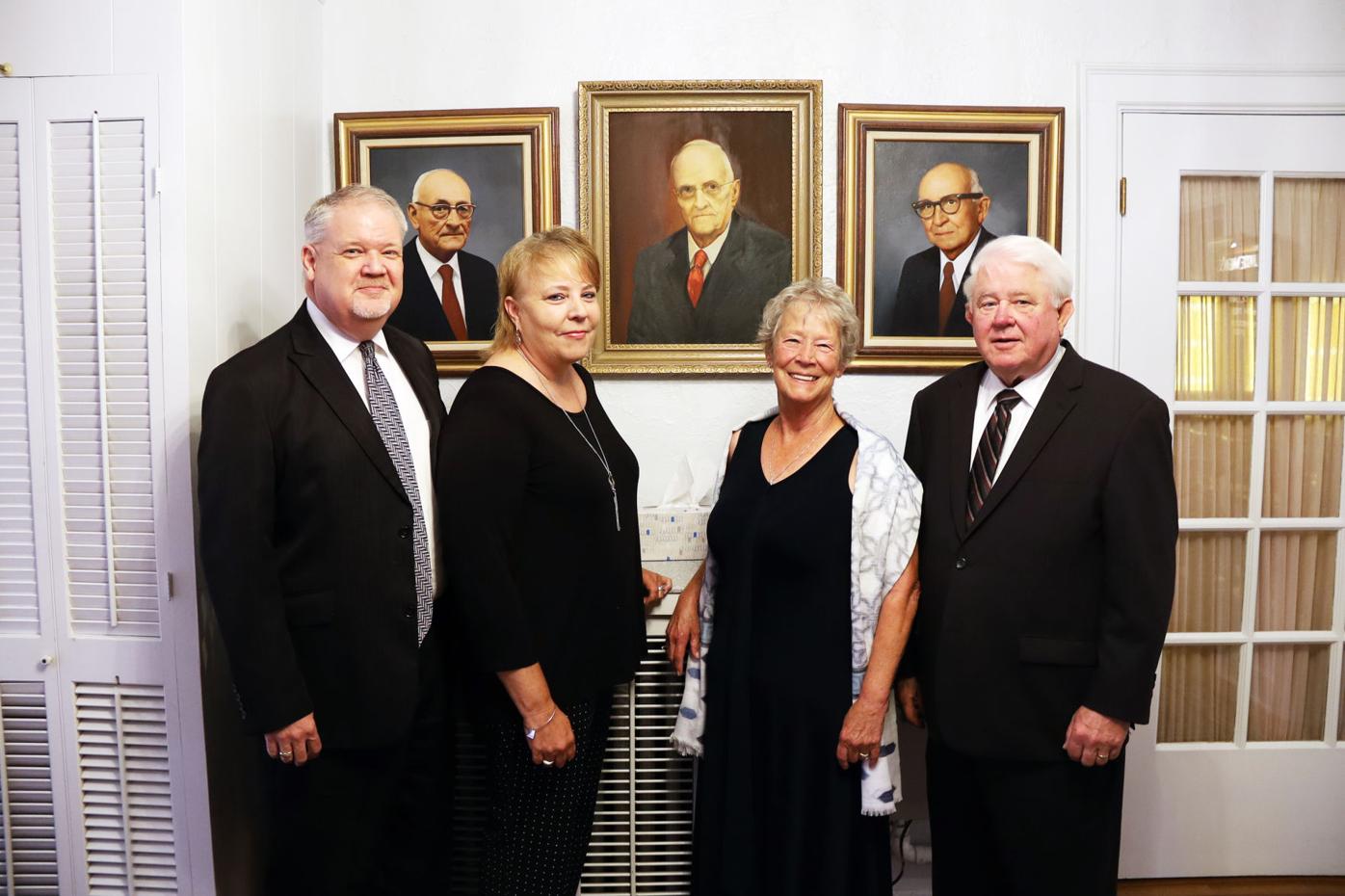 New owners of Price Funeral Home Marshall and April Wyatt are shown at left with previous owners Patty and Richard Dowden last week at the funeral home in Maryville. The Dowdens announced the sale this week. 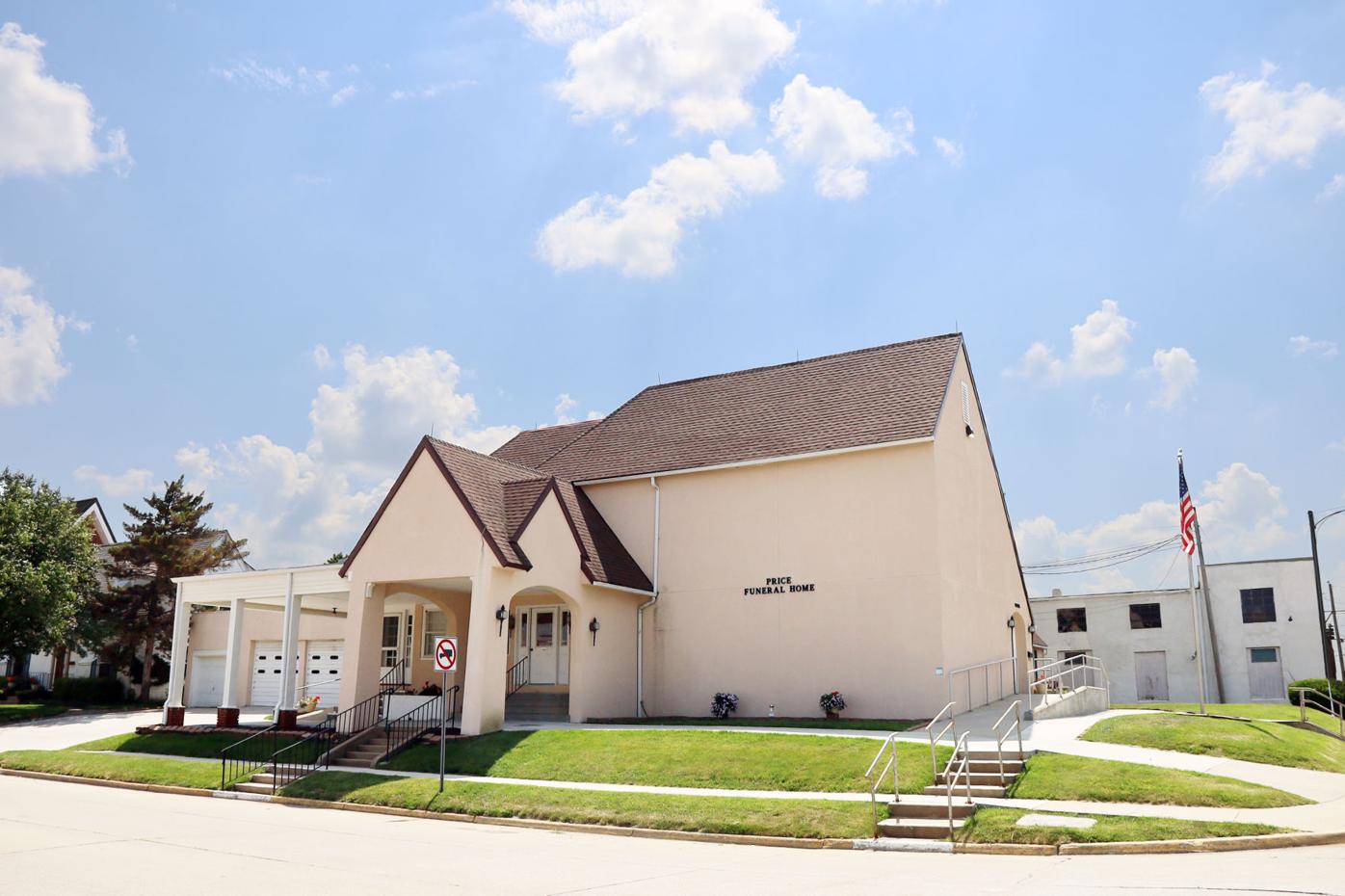 Price Funeral Home changed hands this week and is now owned by Marshall and April Wyatt.

New owners of Price Funeral Home Marshall and April Wyatt are shown at left with previous owners Patty and Richard Dowden last week at the funeral home in Maryville. The Dowdens announced the sale this week.

Price Funeral Home changed hands this week and is now owned by Marshall and April Wyatt.

MARYVILLE, Mo. — While the hands may have changed, Price Funeral Home’s new owners plan to continue offering support to Nodaway County community members in their time of need.

Richard and Patty Dowden have announced the sale of Price Funeral Home, Inc. to Marshall and April Wyatt, existing stockholders, according to a news release.

The Dowdens were the second sole owners after purchasing Price Funeral Home. In 1977, they also purchased Swanson Funeral Home in Hopkins which closed in 2013.

Price Funeral Home has resided at 120 E. First St. since 1929. A grandmother clock in the office is part of the original furniture company.

Raised in rural Parnell, Richard Dowden, son of Harvey and Florence David Dowden, has lived in Nodaway County all his life, save for his time in the military and the time he attended Cincinnati College of Mortuary Science.

“It has been our pleasure to provide services to help families ease their burden,” Richard said. “Most of the families we serve, we know. Although funeral planning and options have changed through the years, we are still proud of Price Funeral Home for dedicated and quality service. Patty and I are pleased to turn the business over to Marshall and April.”

Richard recalled highlights of his 50 years at Price Funeral Home. He held the following positions: President of the Missouri Funeral Directors Association in 1999; District I Director for Missouri Funeral Directors Association for eight years; Past President of the Maryville Chamber of Commerce in 1982; Maryville Industrial Development Corporation; Nodaway County Economic Development; and helped start a Widowed Person’s Service in Nodaway County. He is a member of the First United Methodist Church, Nodaway Lodge No. 470, Scottish Rite Bodies, Moila Temple, St. Joseph and Past President of the Kiwanis.

“Patty and I want to thank our family and the community for the continued support through the years,” Richard said. “This includes our son, Ryan, and his wife, Amy, and their children, Urban, Hayes and Holland; and our daughter, Dana, and her husband, Rick Bosley, and their children, Eli and Anna.”

Dowden plans to assist the Wyatts as needed in the future.

The Wyatt family is no stranger to Nodaway County. According to the news release, Marshall’s parents are Jean Ann (Ward) and Gary M. Wyatt. Jean Ann and Gary grew up in Maryville and both attended Northwest Missouri State University. Jean Ann’s parents owned and operated the Ward’s Drive-In Restaurant for many years in Maryville. Gary’s parents were Nial and Alice Wyatt from Barnard. Nial operated an excavating business and Alice was a homemaker and seamstress.

Marshall’s family also has deep roots in the Maryville community. Some of his late family members who he holds close were Ed and Wanda Gray, Francis and Darlene Jackson, Don and Dolly Wyatt, and Jack Ward. Jack’s wife, Voncile, resides in Reed Springs, Missouri.

The Wyatts moved to St. Joseph in the early 1970s, where Marshall grew up. Even though Marshall was young when they moved, Maryville has always held a place in his heart.

Marshall has been in the funeral profession for nearly 30 years. He was the former Executive Director of Heaton-Bowman-Smith & Sidenfaden Chapel before joining Price Funeral Home in 2017. He also is a member of the Missouri Funeral Director and Embalmers Association.

“As we begin the ownership of Price Funeral Home, we are honored to have this opportunity to share the same caring and compassionate service that the Price Family began in 1902, and to carry on the legacy that Richard and Patty Dowden have provided for so many years to this community,” Marshall said in the release.

Marshall and April have been married 29 years. She is employed with the city of St. Joseph, Parks & Recreation Department, managing Bode Sports Complex/Bode Ice Arena. April also will be involved in the operations of Price Funeral Home.

The Wyatts have one son, Schuyler, who is the OPD Manager of Menard’s in Independence, Missouri, and will have some involvement in the funeral home, as well. He also has one sister, Laurey (Craig) Hamm of St. Joseph.

“My wife and I look forward to meeting the community and continuing to offer caring support to Maryville and the surrounding communities,” said Marshall.